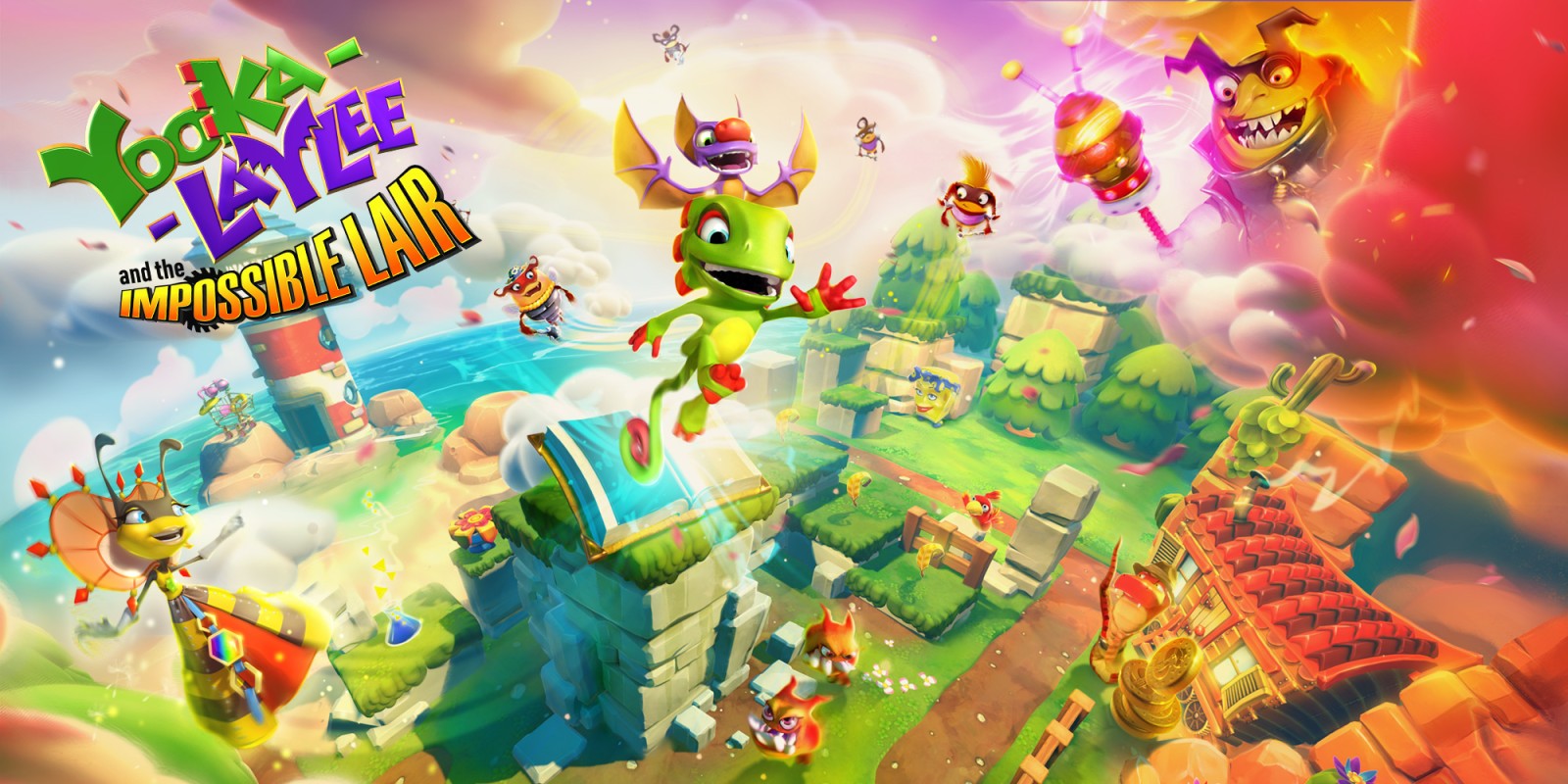 Let’s take a minute to talk about Playtonic Games. Made up of some of the key creative talents that brought us Donkey Kong Country on the SNES, Playtonic Games was founded in 2014. Straight out of the gate, they set out to make a spiritual successor to Banjo-Kazooie for the Nintendo 64. Dubbed “Project Ukelele” the team launched a Kickstarter and reached their stretch goal within 24 hours. While I loved what finally came out as Yooka-Laylee, it was met with mixed critical reviews. , Playtonic Games released a trailer for their next game Yooka-Laylee and the Impossible Lair and what I saw was precisely what I wanted to see in a platformer. Needless to say, I was incredibly excited to give this a shot, so let’s jump in and see just how impossible this lair is.

Yooka-Laylee and the Impossible Lair starts with the titular heroes popping out of a book in the Royal Stingdom(Yeah, there’s a lot of puns in this game). Capital B, being the arsehole he is, is trying to take over the Royal Stingdom. Using his mind control device, the Hive Mind, Capital B steals the Royal Bee Guards, the Beettalion. Throughout 40 beautiful 2-dimensional levels, it’s up to you to rescue the Beettalion to take on Capital B’s Impossible Lair.  Players can challenge the Lair at any time. However, it’s extremely difficult (Impossible you might say) without the Beettalion shield to soak up your mistakes.

In between the levels, you get to explore a 3d overworld. Filled with puzzles and challenges the overworld has secrets to uncover. Various tonics you can find will alter the game in different ways. Some of the tonics change the way the game looks but we’ll talk about those in a minute. There are more than 60 tonics to find and unlock throughout the game. The overworld is filled with hidden challenges and puzzles, so do some exploring and try to find them all! 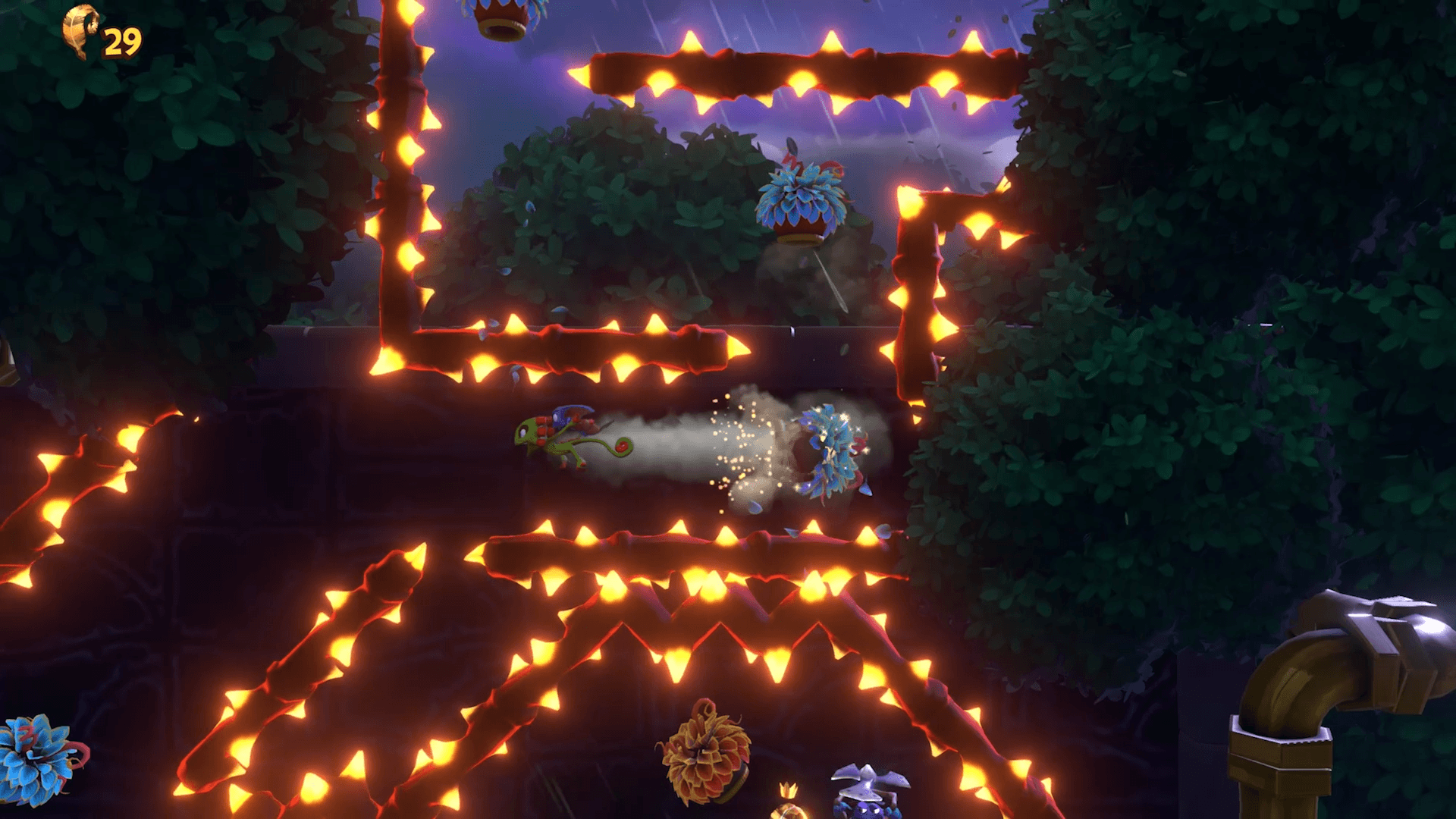 Yooka-Laylee and the Impossible Lair is a beautiful game. Playtonic Games have chosen a very fun cartoony art style and I love it. It adds a level of charm that the game might not have had with a more realistic style. Earlier I mentioned Tonics that affect gameplay, and now I’ll talk about the ones that alter the visuals. Some of the tonics will change the aspect ratio, whereas others will put a filter over the screen, making it look like you’re playing on a Game Boy. It’s quite fun playing with the Game Boy filter, using the 4:3 aspect ratio. It gives a swell feeling of nostalgia, which is more than welcome in a 2D platformer. Yooka-Laylee and the Impossible Lair runs incredibly smoothly on the Nintendo Switch, which is critical to any platformers success.  The frame rate holds steady docked or in handheld mode.

The soundtrack of Yooka-Laylee and the Impossible Lair is probably my most absolute favourite part of it. With songs from some of my favourite composers like Grant Kirkhope and David Wise it really brings back a huge chunk of my childhood. Kirkhope is responsible for soundtracks such as Donkey Kong 64 and Banjo Kazooie. David Wise, on the other hand, composed the soundtracks for the Donkey Kong Country series and Battletoads, among others. So those two composers alone being involved in the soundtrack of Yooka-Laylee and the Impossible Lair creates a certain level of glee for me when I play. 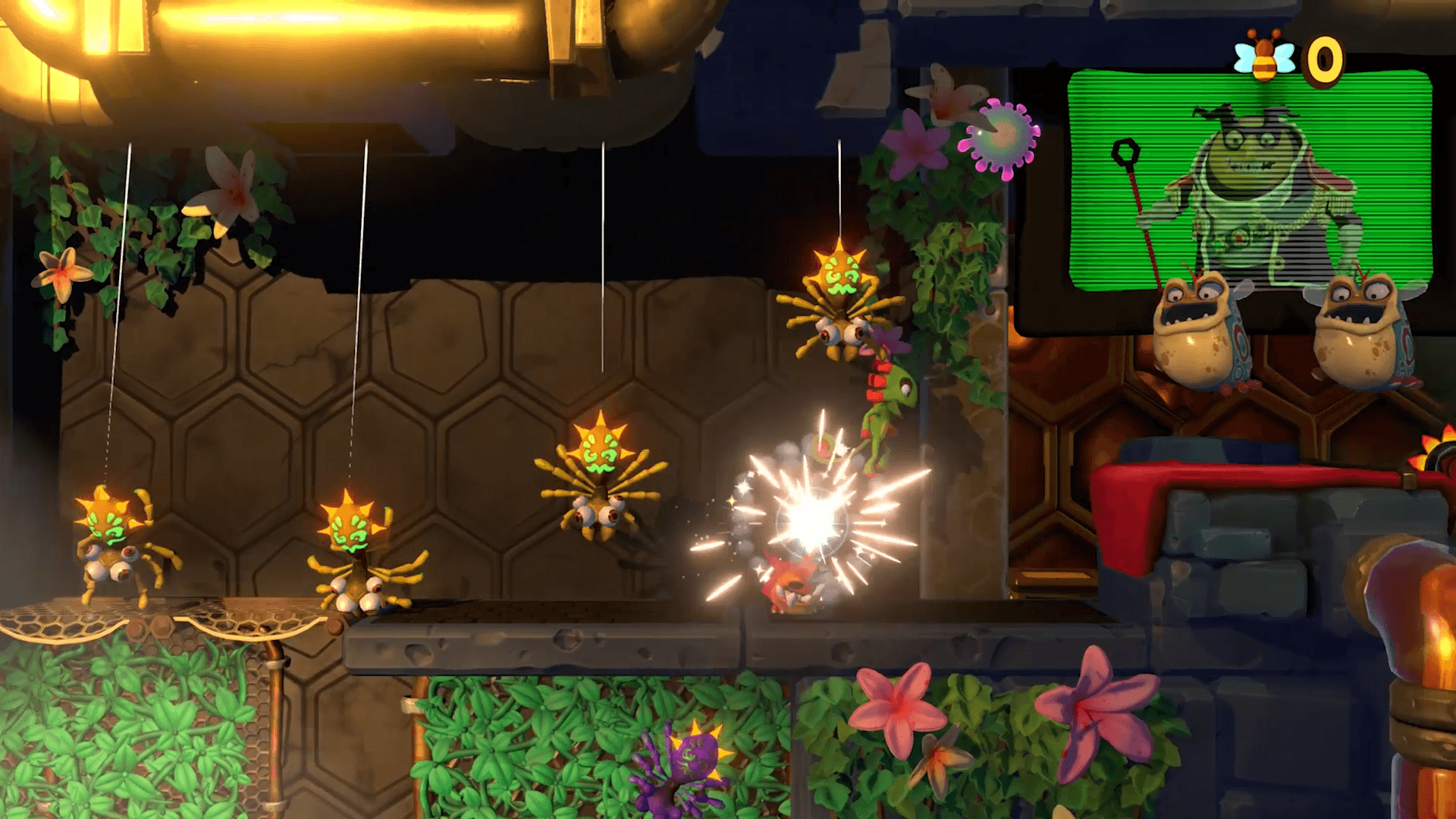 Yooka-Laylee and the Impossible Lair is a single-player 2D platformer. That being said, It’s longevity is pretty limited for the average player, who might not complete all the challenges. Myself? I plan on getting 100% of the hidden secrets before I finally put the game down. Its simplistic gameplay is addictive, and the smooth controls make it a true joy to keep playing again and again. I could see Yooka-Laylee and the Impossible Lair getting a lot of longevity for challenge runners trying to beat the Impossible Lair without saving any of the Beettalion members. 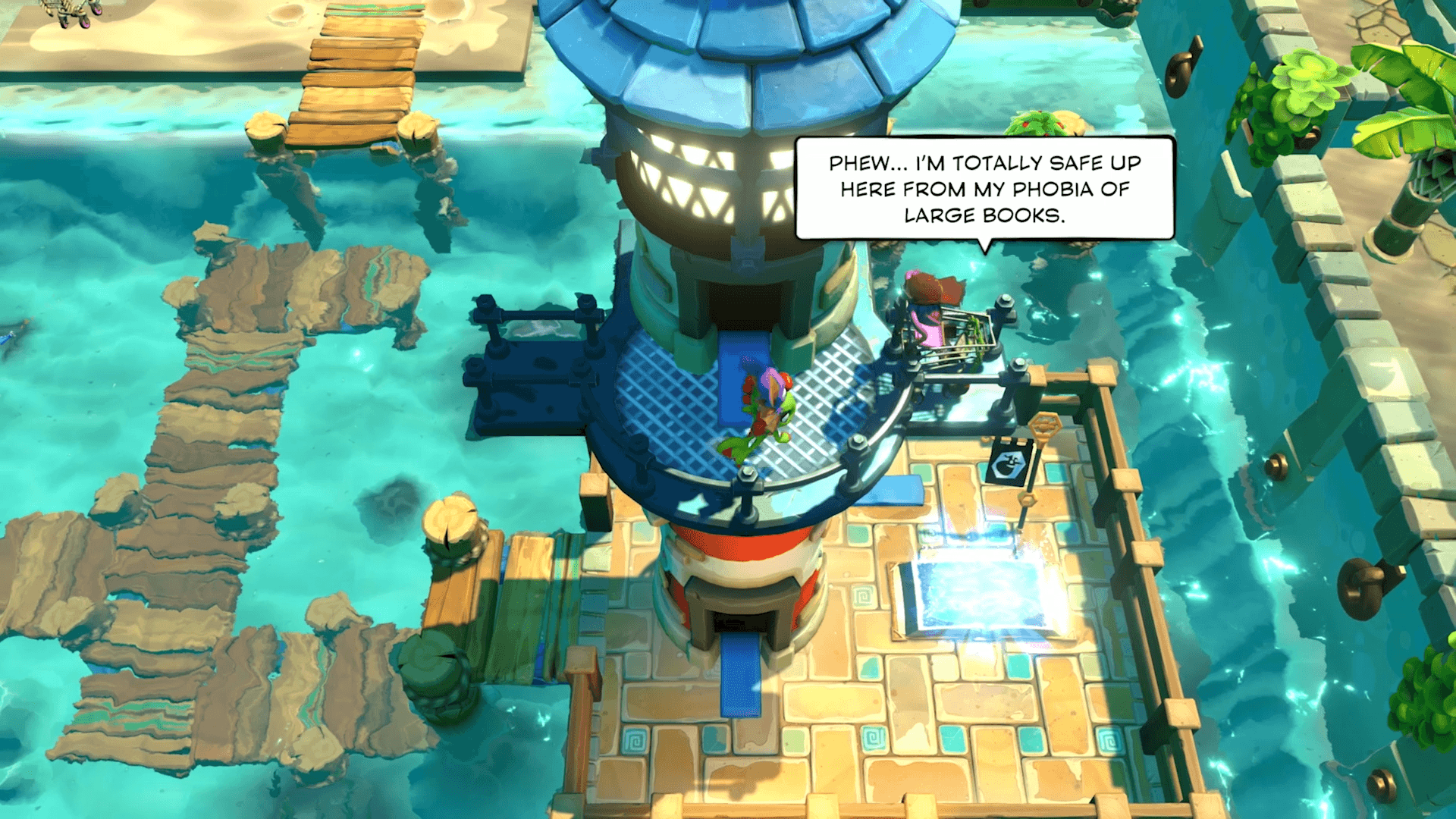 Wrapping up, Yooka-Laylee and the Impossible Lair is a fantastic game and well-deserving of high praise. Between the goofy dialogue, lovely cartoony art style, and super-smooth gameplay. I’m ecstatic to be able to award them with the Thumb Culture Platinum Essential award. If you own a Nintendo Switch, you don’t want to miss out on this gem of a platformer. Available now on the Nintendo eShop for £24.99, Yooka-Laylee and the Impossible Lair is every bit worth your time and money.