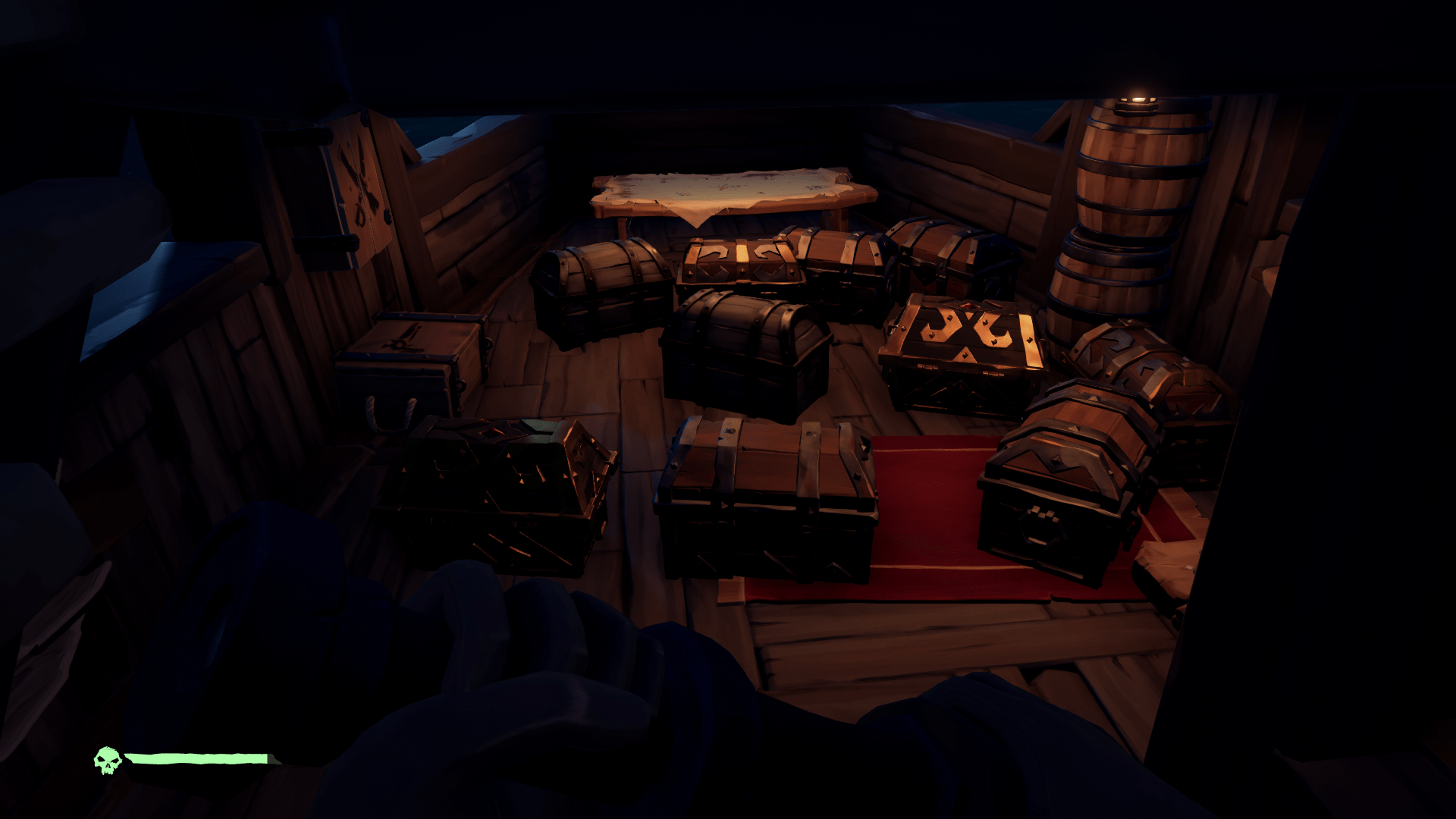 I saw Sea of Thieves grow from way back in the early months of 2017. Playtests had just got started in fact. I think I was the second wave of players to get accepted, but I didn’t get to play much. I knew from my short time with it though, that it was something nice and that the community was excited amongst one another in the private forums. 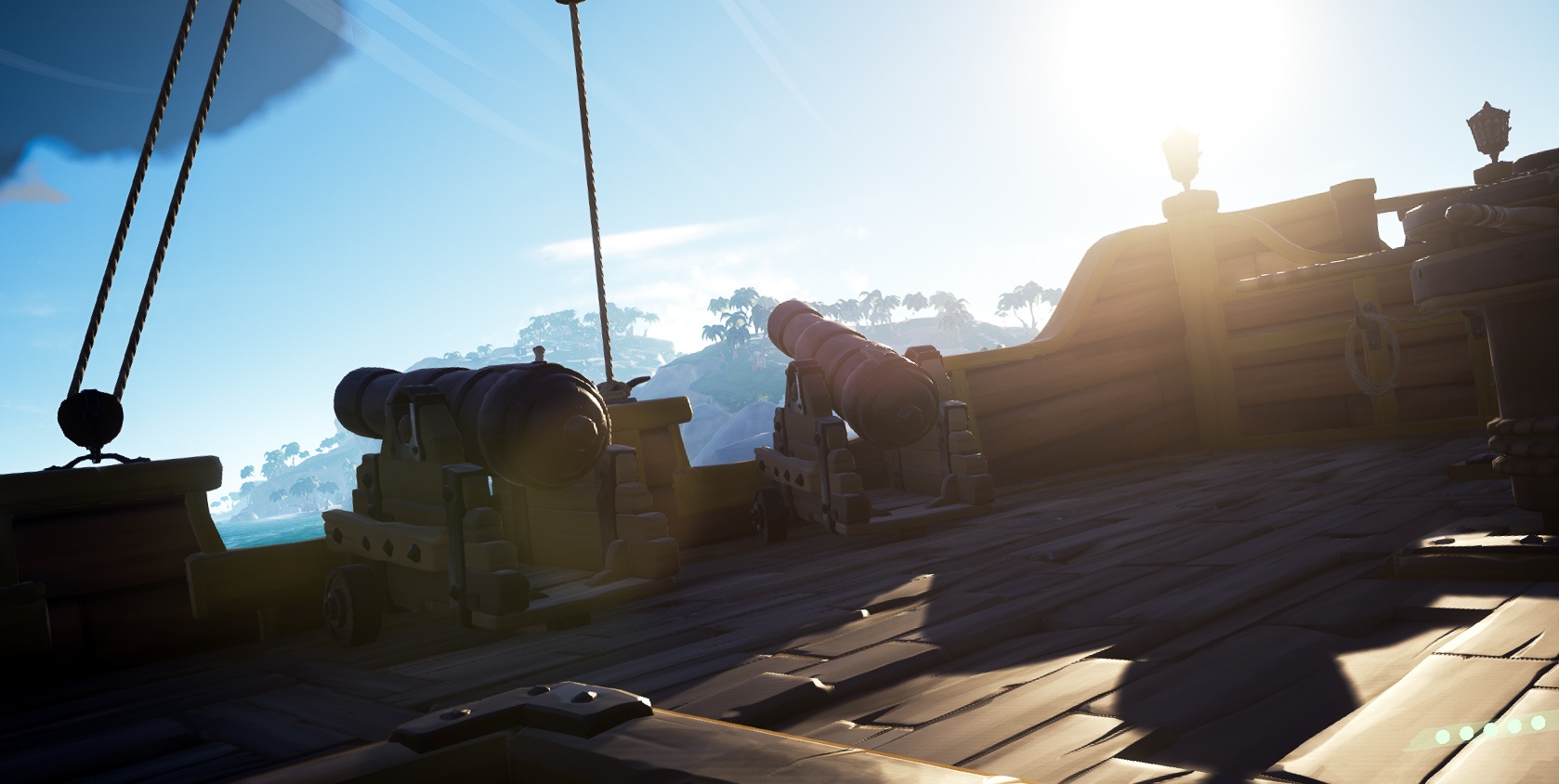 February 2018 saw more playtests taking place as the game grew closer to launch, and already I was seeing a shift in community reactions. A mixture of excitement and people lashing out at the lack of things to do within the Closed Alpha. You can tell a game has grown incredibly popular when more people seem to start hating it before giving it a chance. It gives the player a pen and some paper and offers them the opportunity to pen their own adventure.

Launch saw Sea of Thieves do incredibly well. It went to the top of the GfK charts for physical sales in the UK. It had such a large join rate that the amount of players trying to join the servers ended up with Rare having to block out any new players trying to join the game. Now the game has had time to settle, and for the past few weeks I’ve been too busy to play it. So I feel like it’s time to raise the sails and see if the experience I adored around launch remains the same.

Sea of Thieves is a simple adventure title that finds you either sailing alone, or with a crew of up to four other pirates. You’re all in an online PvP world with the goal of becoming a pirate legend sitting at the back of your mind. After lazily choosing your randomly generated pirate that suits you, you take on main quests that are otherwise named, “Voyages”.

These can be obtained from three type of people from different divisions. Find treasure chests and sell them to the Gold Hoarders. Gather chickens and deliver supplies to other outposts for the Merchant Alliance. Or you can complete mystical quests for the Order of Souls. All of these quests usually consist of you just sailing to another island, doing your business. Then you sail back to the outpost and show proof and get paid for your time and loot. Then you do the same thing for another quest. It can eventually wear thin and lead to eventual boredom sadly.

The quests can however lead to side-quests. Some of these can be a message in a bottle informing you of some skeletons to kill on an island that’s a two day sail away. Perhaps it’ll tell you of other buried treasure nearby. Other times you may dig up a chest for a voyage and earn an additional map. 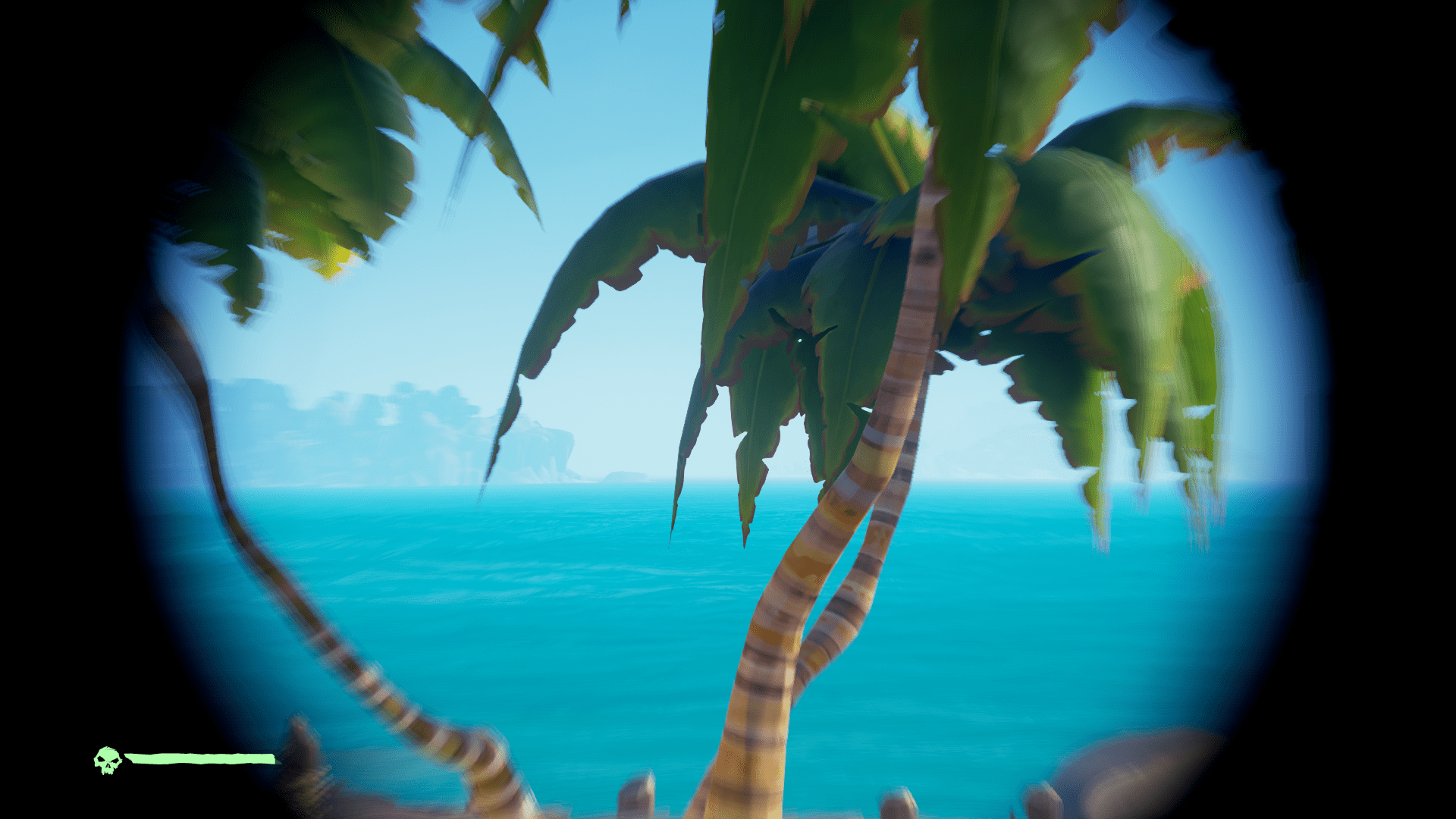 The thing about the game is this. Sea of Thieves isn’t about the quests, or the eventual end game. It’s about the journey that you and your crew paint as you shape the narrative and form your own story to tell.

You could jump on the game and find yourself simply completing three treasure hunts and then close the game down. Other times you could end up with a dramatic chase between you and another galleon. Cannonballs firing towards you. Then finding yourself and the enemy coming to a truce in the wake of a sudden attack from a monstrous Kraken. Once defeated the enemy could offer two treasure chests to you and be on their way. It also holds onto some of the most realistic and dynamic water systems I’ve seen in a video game.

This does mean that the experience is different for every player, which makes it more understandable how some players are complaining about less adventurous voyages than others. One of Sea of Thieves’ main elements is the sailing. An area where the game shines. Raise the anchor, drop the sails and angle them to the wind, then set sail. Sail over the waves while fighting against undercurrents, and spend half of your time in the game on board the boat.

Due to this, it’s obviously important that Rare have worked hard on making it feel not only as interactive as possible, but engaging. Sailing alone on a small schooner isn’t too daunting and leaves you with plenty to organize as a result. And as for sailing with a full crew on a Galleon, this allows all four members to focus on specific tasks.

Combat in terms of cannons is well done and largely explosive. Pistol, Blunderbuss, and Snipers are all good weapons but limited to five bullets. The melee is where it falls flat. Swordplay is a feat pirates were well known for, yet in Sea of Thieves is appears to have been sluggishly mushed together. The targeting seems off, there’s a laggy input between attacks, and blocking doesn’t seem to do a whole lot of good.

Graphically Sea of Thieves merges a comical themed character art style, with realistic surroundings. However, it also holds onto some of the most realistic and dynamic water systems I’ve seen in a video game. Honestly, it looks incredible. While the calm seas at an outpost only look pretty, it’s when you get into open waters and the waves begin to become more treacherous that it really shows. 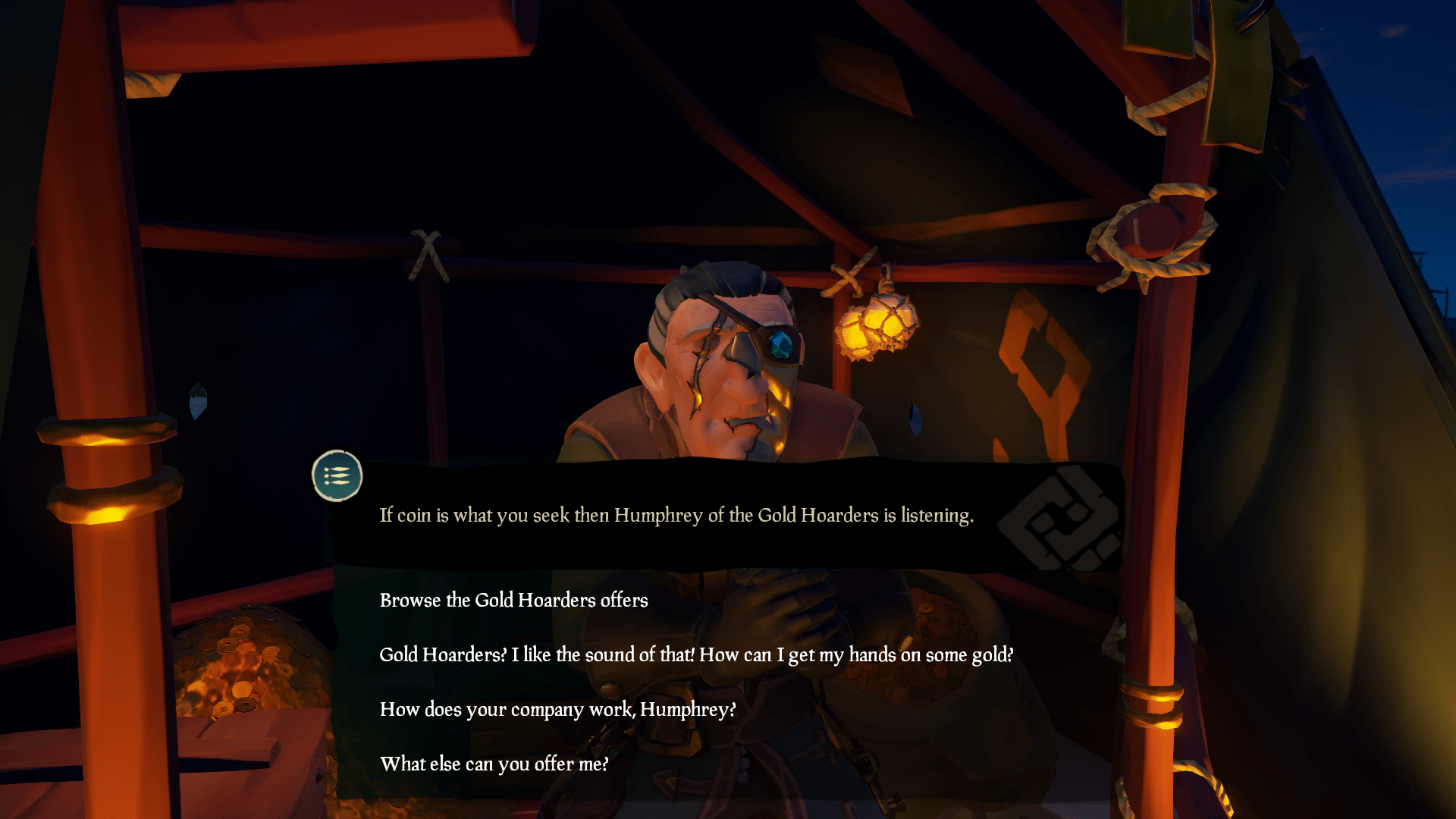 Voxel clouds in the shape of a skull with glowing green eyes signify cursed islands, although it isn’t clear that’s what it signifies until you get there. Wind streaks are shown in a light trail to allow easier angling of sails. Water crashes over the bow of the boat and can be seen flowing through the wood on the upper deck. Everything is wonderfully detailed.

You’ll also be able to hear nearby pirates and pinpoint their direction thanks to the directional audio. The OST sounds jaunty and bouncy, and the in-game instruments allow pirates to orchestrate their own songs. Suddenly happy exploring can be changed to sinister tides by the sound of an approaching storm thundering its way to you. 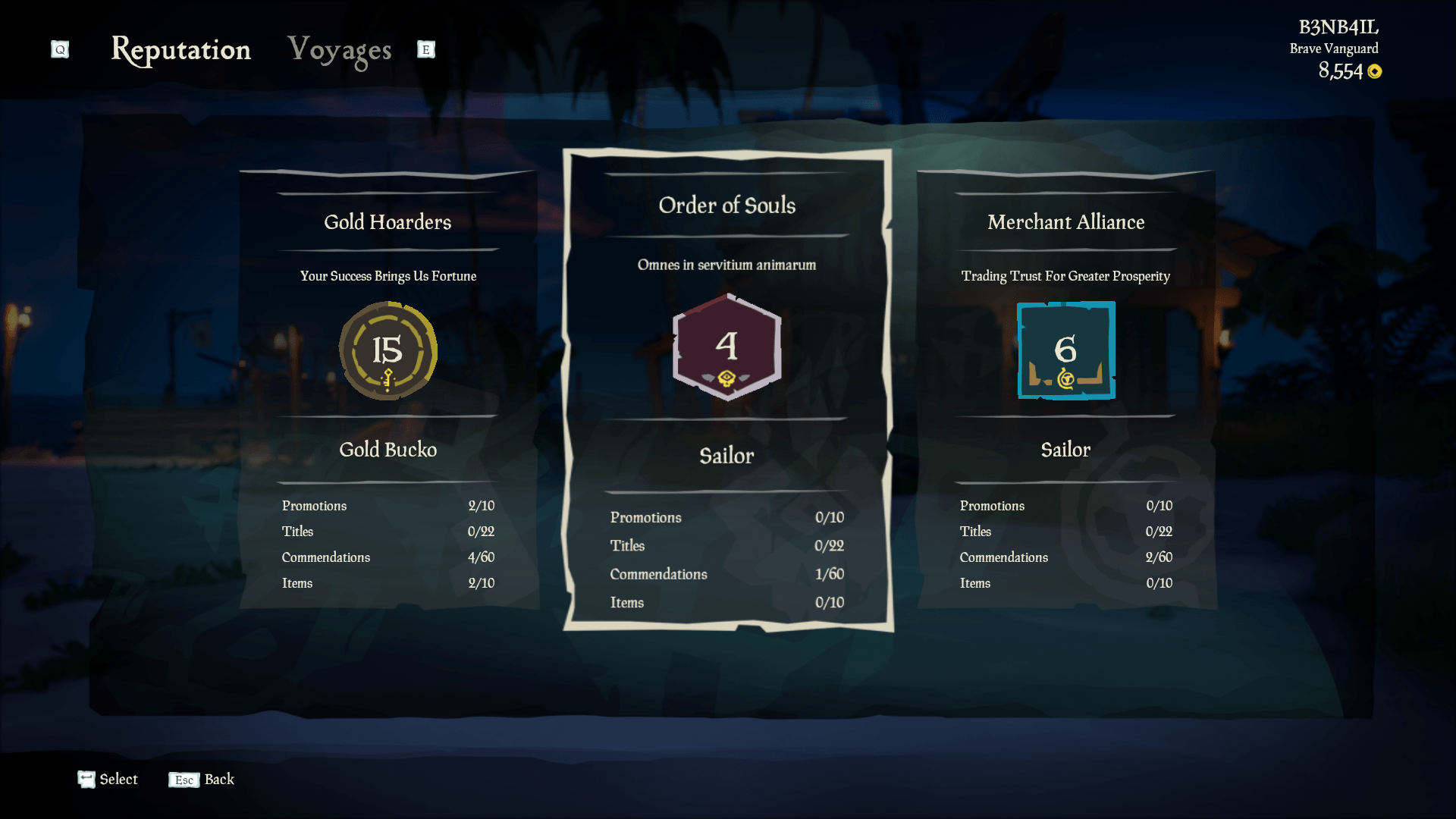 Sea of Thieves is a great title with wonderful attention to detail. However the game lacks a tutorial and assumes the player will be able to figure things out for themselves. I didn’t really have an issue here, but there were some things I didn’t learn until witnessing others. It’s also not a game for fans of fast paced titles, so the slow, uneventful voyages could leave a bad taste in players mouths. Swordplay is a feat pirates were well known for, yet in Sea of Thieves is appears to have been sluggishly mushed together.

The problem that Sea of Thieves seems to have is that it gives the player a pen and some paper and offers them the opportunity to pen their own adventure. However it seems that, going by online comments at least, some players just aren’t up to the task and want a story already panned out for them.

If you’re okay with the slow Voyages, and the fact you shape your adventure, then it’s great. And if you accept that other crews that will act like pirates and grief you, and steal all your hard earned loot then you’ll love it. I find myself jumping on to sail a Schooner alone with a single voyage, just to enjoy the sailing experience. 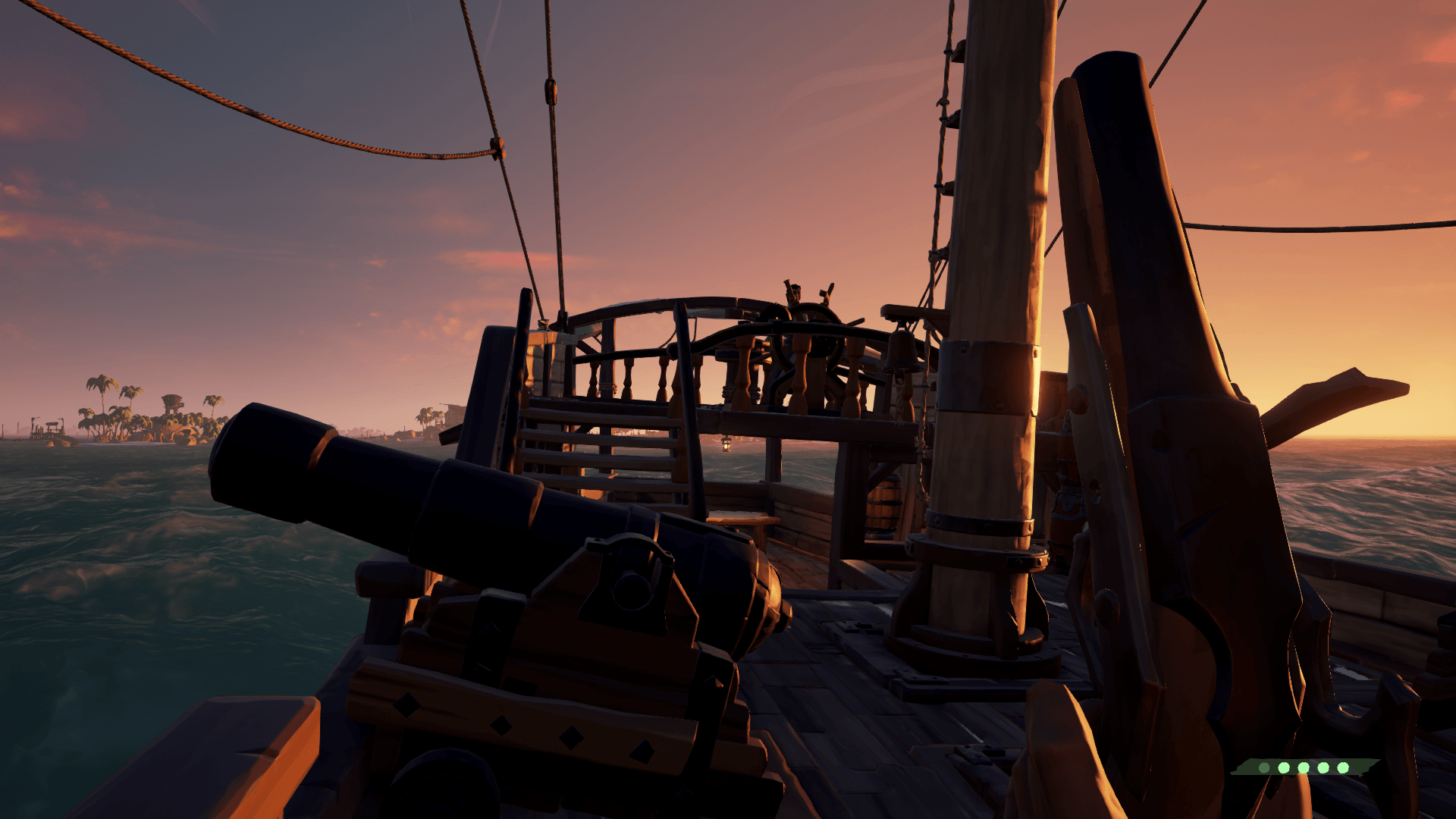 It’s just a shame that sometimes the solo experience can be boring, and the game seems to want to urge players to play together to enjoy it fully. I’m glad to see more kind-hearted players have remaining on the servers so there’s less griefing taking place.

It’s one of the best pirate games I’ve experienced, and it’s remarkably memorable. Hundreds of stories are popping up on social media, telling tales of joining other crews and completing voyages together. Some telling tales of mutiny, others telling tales of trust being broken, or Saviour’s on the seas.

You can tell the game has been out for a while now, as around launch the servers were filled with other players just blowing other players up. People on social media complaining about having seven chests lost to another crew that attacked them. But now, the game seems to have lost the constant barrage of cannon crazed pirates, and has kept those that enjoy the title to sail the seas to help make the experience a lot more memorable. I’m going to land Sea of Thieves a Thumb Culture Gold Award.