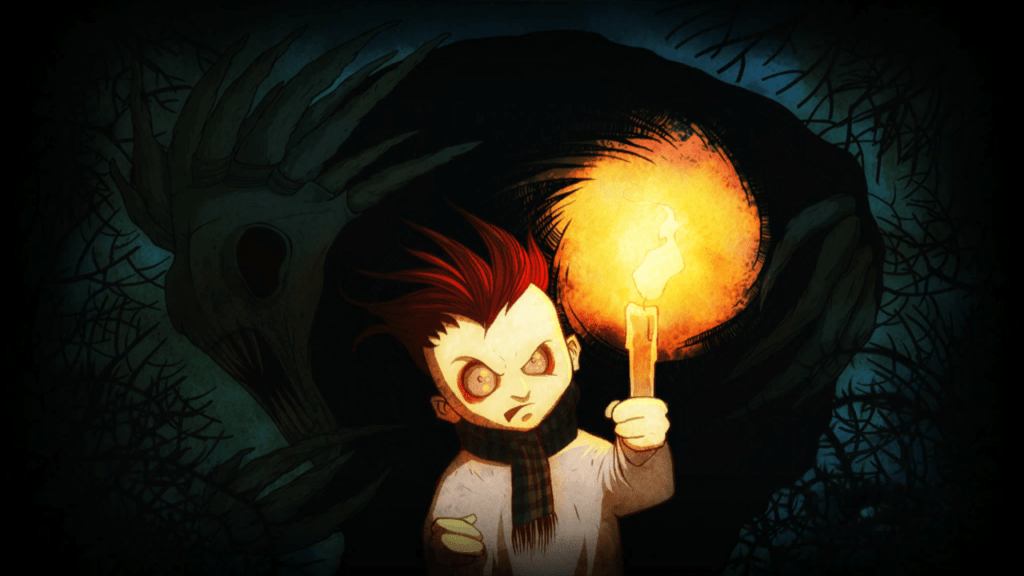 When you become a lodger of a new property, you probably expect to just sit and relax, kick up your feet with a beverage of fresh tea, and run your fingers over the fabric of your armchair as you listen to the gentle crackling of the firewood in your fireplace. Sadly that isn’t possible in Knock-Knock.

Originally launched on PC back in 2013, and then later ported to IOS devices in 2014, the creepy, side-scrolling thriller by Ice-Pick Lodge LLC is now available on Xbox One thanks to publisher, Sometimes You. The story finds you, a new lodger for this cabin, a cabin famed for being used as a laboratory in the past by three generations of previous lodgers, a cabin situated deep in the woods. You move in, but begin to notice weird happenings occurring, such as items going missing, strange sounds, and it begins sending you into a spiral of madness, questioning reality itself. 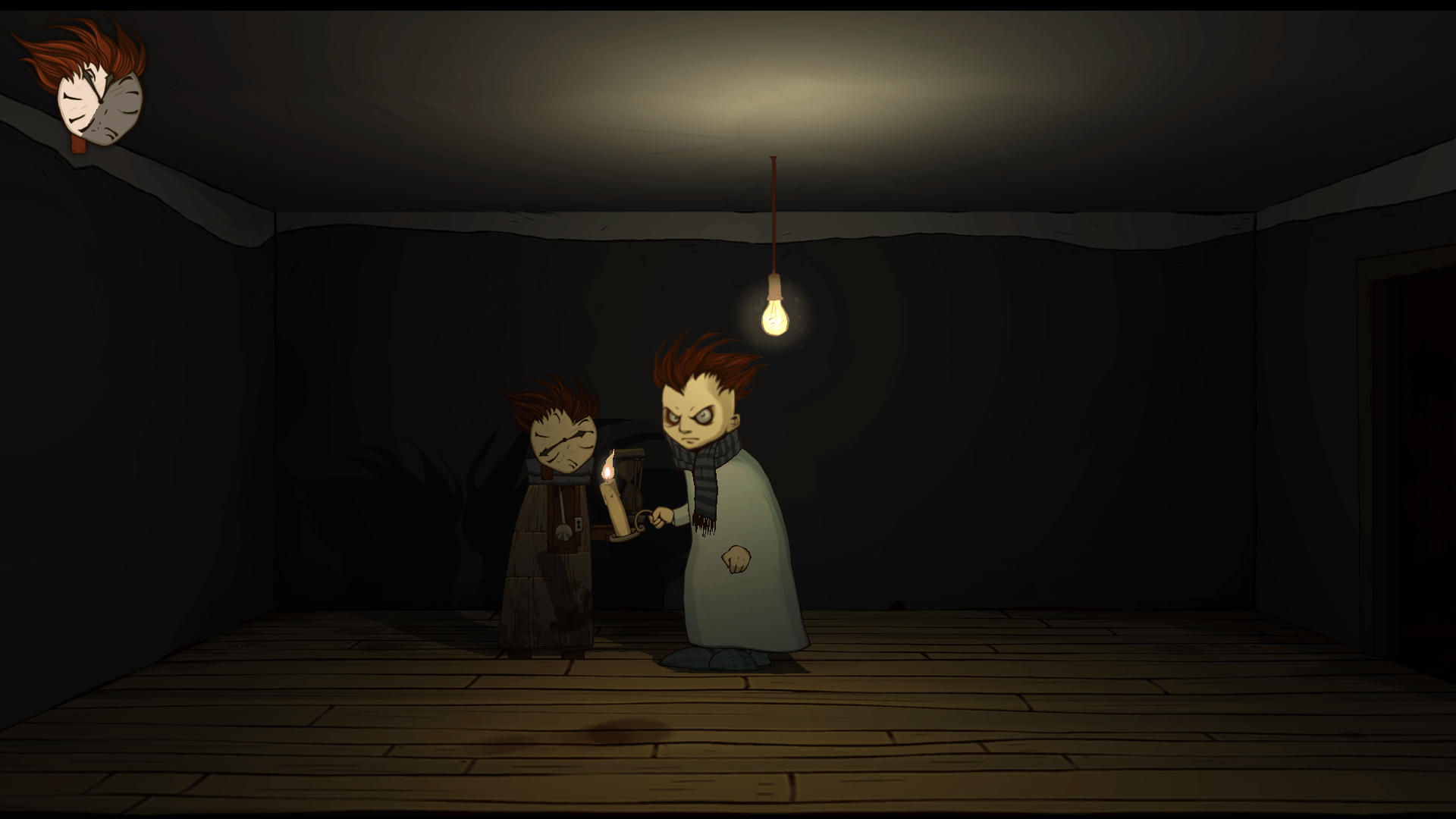 Your goal is quite simply, hold out until sunrise, but the main game takes place at night where you’re trying to actively solve the puzzle while avoiding the unknown creatures you believe are wandering around. While that sounds rather simple, it’s a lot harder than you believe, I’m actually struggling to find ways to describe what you’re supposed to do.

You begin the story by waking up in your house, your character already sports eerie looking bags under his eyes, and his hair a wacky mess from battling with his pillow. He continues to wake up every night, nervous about creatures getting in, so he heads to every room and checks the lights. When you enter rooms you are instructed to hold “A”, which sees an animation of your character raising his hands above his head and “changing the light bulb”, but really you can change a light bulb right from the doorway, in the same way you can switch on a working light at any point in the room just by tapping A. When the lights are on, some rooms become populated with furniture that you can hide behind.

Now, there’s a clock situated in the top-left of your screen, this continues to speedily progress clockwise until dawn, with your progress being shown in the lit up parts of the clock. The clock will go anti-clockwise when you’re hiding, if a creature touches you, and if you change a light bulb in front of a big creepy eye. At least, those are some of the situations I’ve experienced with time going back a bit. The hiding part is especially clever, while you’re hiding from creatures, time goes back as if to signify reality and the feeling you get when you do try and hide from someone or something, it feels like ages. There are clocks in some rooms that when activated will speed up the oncoming morn’, but they only do so for a short period of time. 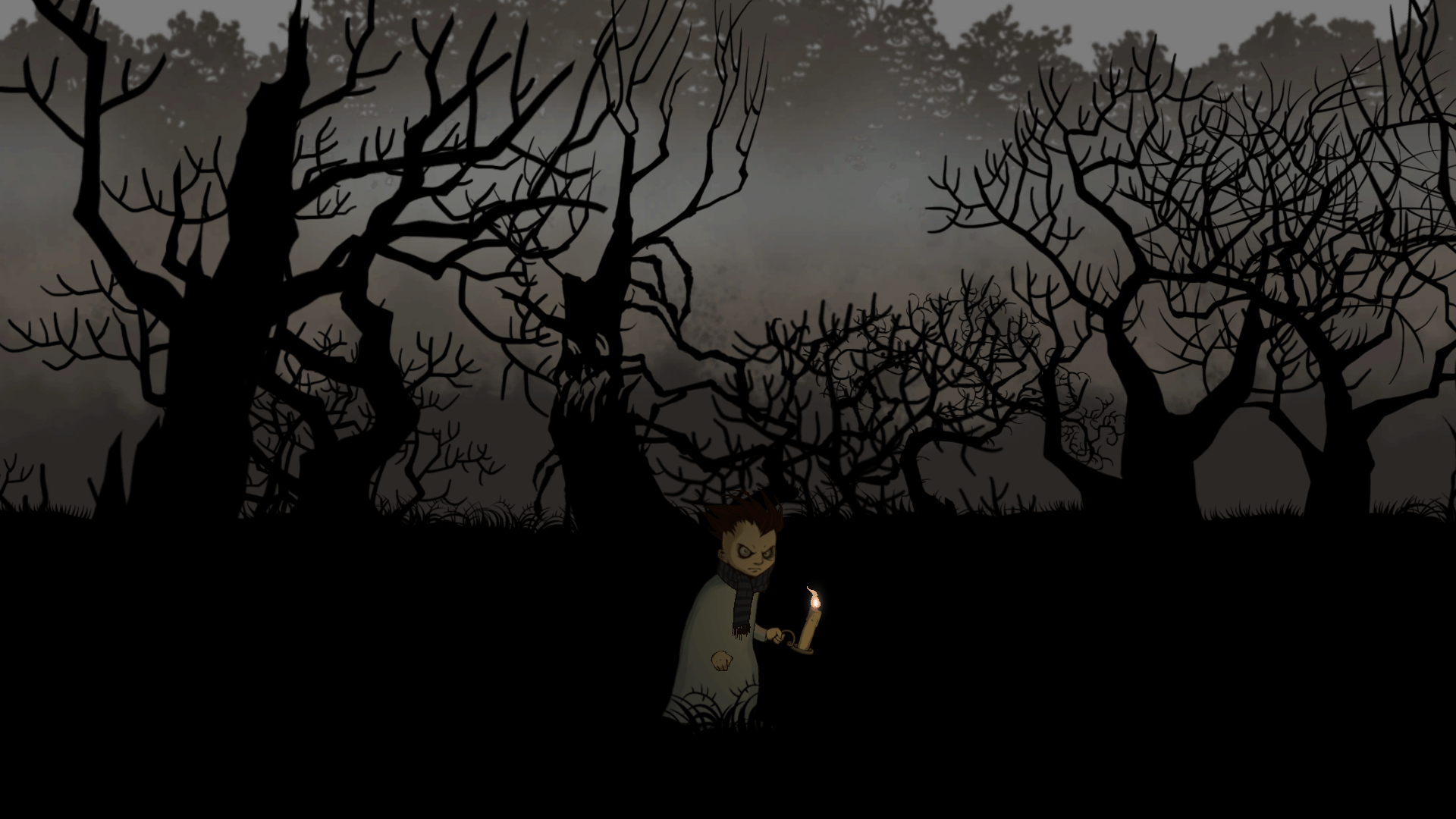 The creatures that litter the house may be part of your characters mental state, hallucinations if you will, but they’re still going to affect your progress, so you either have to hide, or get to another room where they can’t follow you. In my case, I found that going up or down is a skill not known by the creatures, so I saw ladders as my safe haven…until one faded away and reappeared in the below room I had rushed away too. Really, I don’t understand them, except don’t look at them, and run away from them. Although, saying that, using the word, “Run” there is a bit silly. You can either walk on tiptoes in the dark, or when the lights on you walk with more confidence. You can also open doors that randomly slam shut and lock, and you can venture outside your house, but when you come back, you’re asleep and wake up again, and have to fix all the lights again.

On top of that, whilst you’re fixing lights, the camera will whip out to the whole house and then zoom to another room that flickers, indicating to go there but without actually saying that. So you go there, and there’s an eyeball on the wall, which will either go away when you turn on the light at the cost of time going back, or you can enter it…this seems to lead to you being in a different area that isn’t a house, then you find a door, and either get lost in a maze of doors, or wake up in your house again. And each time you progress, you’re firstly shown a progress screen, which is a spiral, and you progress until you hit the final level, and also your house grows bigger and is procedurally generated.

It really doesn’t make any sense, and I just found myself under the impression that I just have to make sure every light is working, then progress. 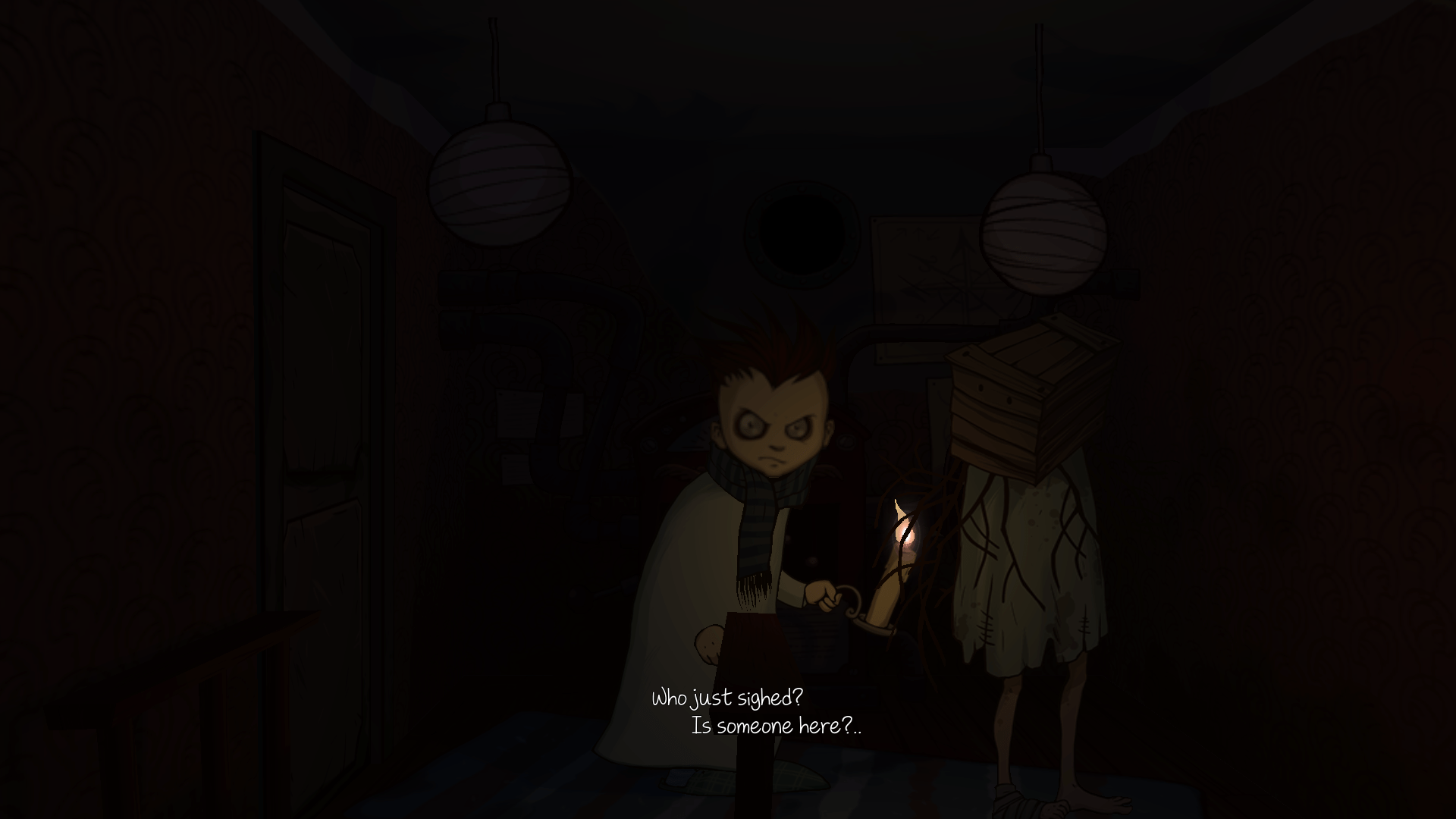 While Knock-Knock doesn’t make any sense though, it is enjoyable and incredibly creepy, with loud, powerful sound effects sending your skin crawling, and back arching. There’s no dialogue work…well there is, but it’s subtitles that are accompanied with the protagonists voice muttering gibberish.

Knock-Knock brings creepy visuals to your eyes, bringing a type of 2D layered feeling, with the surroundings feeling similar to a child’s toy house made out of cardboard, and with the background being a haunting, monochromatic style that brings the warm, welcoming colours of dusk to light once dawn suddenly arrives. The overall feel of the game is rather dark, as expected, with rooms being almost pitch black until you wander in with your tiny candle, or lantern illuminating a small radius around you, at least until you turn on actual lights that is. The art is all rather pretty really, and the world is layered giving the game wonderful depth.

It’s really simple to control which is okay, but the pace of the game is rather slow and I found it quite tedious, and the simple controller layout just feels like there’s not enough going on to keep your own mind awake let alone the characters, then again, maybe that’s the point, or maybe I’m just overtired? 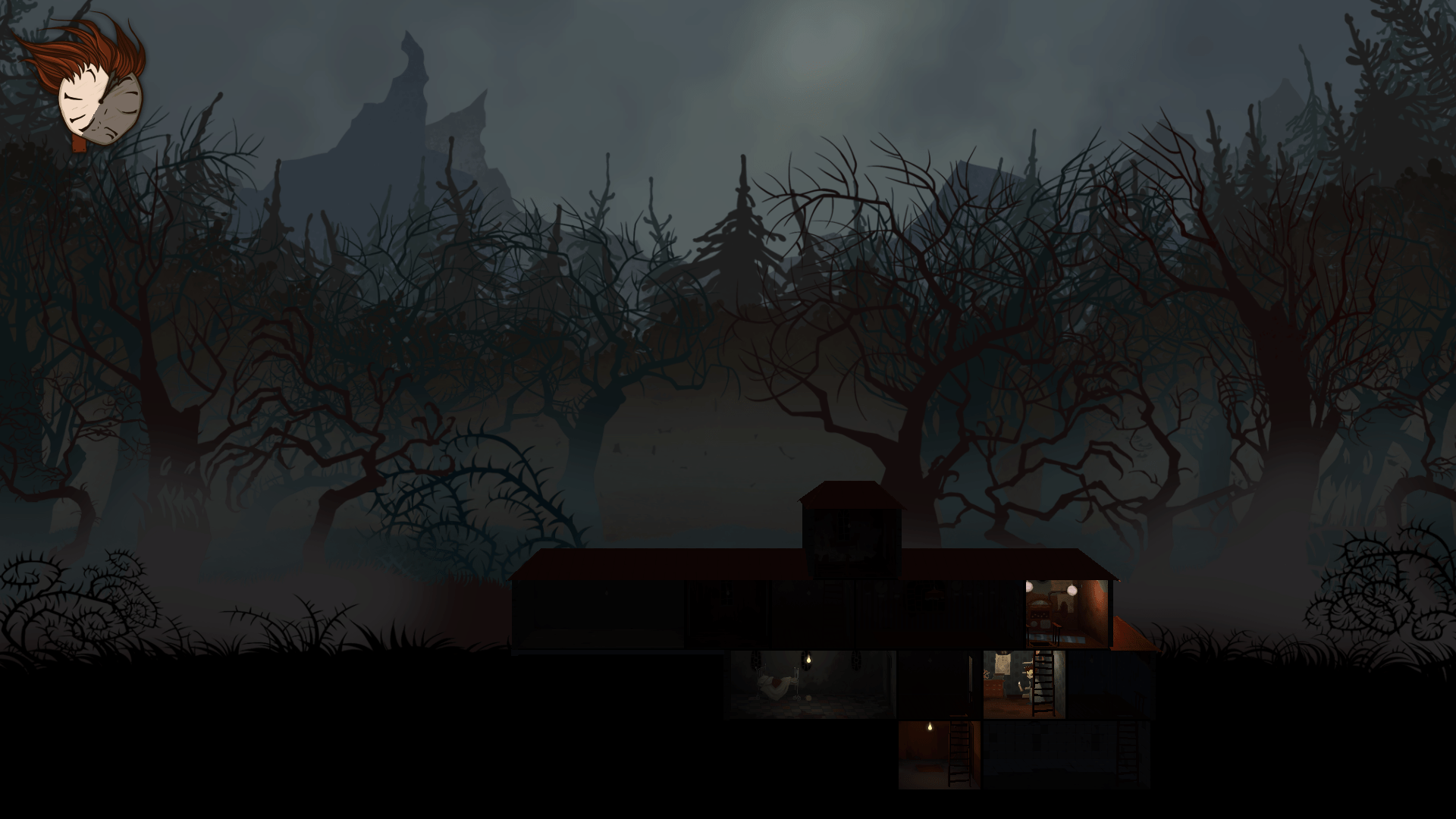 Knock-Knock is an incredibly intelligent game though, it lets you get on with minimal hints and hand holding, relying on your own actions to succeed, and the occasional audio cues. The random mumblings from the protagonist can grow tiresome, but sometimes can offer subtle hints when you’re having trouble, and really, you can just sit and wait until dawn comes…which kind of defeats the point of the game. While you’re instinctively driven to head to certain rooms, doing so leaves you with the knowledge that you’ll loose time just to eventually get a clock, so standing and waiting for dawn is a long winded, but possible option.

I’m still not entirely sure about it, it feels like I had fun, but at the same time, I felt so confused that I didn’t enjoy my time with it all that much because I was trying to understand what I had to do, but then, it also added to the engagement value. It’s certainly worth a play and doesn’t focus on jump scares and thus puts itself in the psychological horror game area, not only that, but it looks beautiful on the Xbox One and seems to run incredibly smoothly. I rate Knock-Knock the Thumb Culture Silver Award.