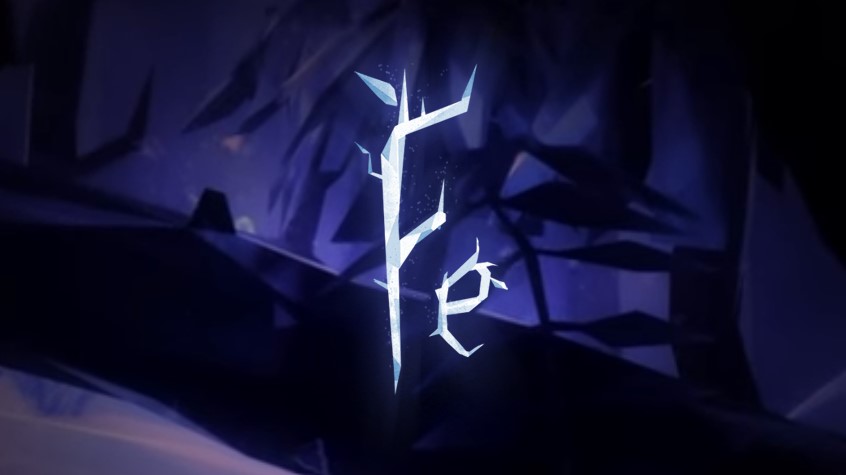 Fe is an action-adventure video game developed by Zoink and published by Electronic Arts under its EA Originals program. Zoink AB is a Swedish video game developer based in Gothenburg, Sweden. The company was founded in 2001 by Klaus Lyngeled, after he quit his job at Shiny Entertainment to start his own studio. You’ll be able to play it on Microsoft Windows, Nintendo Switch, PlayStation 4 and Xbox One but, for this review I played Fe on the Nintendo Switch.

From the moment I loaded Fe and listened to the hypnotic beauty of the start menu, I knew that I was going to be taken on an emotional voyage of the soul.

Fe is a delicate fox like creature who’s on a mysterious journey through a dark Nordic forest, filled with strange and wonderful creatures. Their world has become tinted with the arrival of nightmarish robots they call “The Silent Ones” with spindly limbs and glaring spotlight eyes – convey the message that they’re dangerous and will hunt you down – and who capture and destroy these whimsical friends of the woods in a web-like barrier, encapsulating them.

From the first 10 seconds of Fe, my heart filled with complete pleasure as I looked at my surroundings in this majestic, alluring forest. The plants at my feet responded with joy as I let out a small howl in my attempts to communicate with everything around me, including some other little animals who heard my cry and howled back with a “Let’s be friends!”. This was a moment that made me smile from ear to ear given the stature of this seemingly helpless being, it was brave in the face of the worlds impending destruction but, still showed kindness (something our own planet could take a leaf from) and not to forget how unbelievably adorable Fe is when it lets out those little yelps!

To be clear, you need friends in this uncompromising forest to help you with some puzzles and getting around so, be sure to spread that love far and wide. There are no tutorials or hand holding in Fe, you discover the story as you go and at your own pace, which is exactly how it should be for a game like this. As you sink further into the forest, you will notice that you can’t access certain areas or things due to your skill level but, don’t worry, these will soon become available as you progress and learn each animal’s language hence allowing you to unlock the secrets with a mere tap of your controller. Birds can open up a plant with a core that you can throw at the Silent Ones’ barriers to unlock whatever helpless forest friend they have imprisoned, while the little lizards’ chatter gets purple flowers to open that bounce you up into the air to previously inaccessible regions.

Eventually, you’ll gain independence by being multilingual, freeing you to move at your own pace without following or waiting for the AI, but having you rely on the other animals lets the game gently lead you through each area. Once you learn the song of the birds, which is quite early on, you then can call a bird over wherever you are to guide you if you become lost in the forest – I did this many times, even when I wasn’t lost, and also hitch a ride on the many majestic phoenix type birds that roam the skies. The controls were very straight-forward and easy to learn, switching between languages was a breeze but, one aspect that I did need to practice quite a lot was jumping from tree to tree. I found myself either jumping and not going far enough or jumping and veering off to somewhere else, this wasn’t a problem though as once I had a few tries I found the flow very simple.

The Swedish geniuses that are Zoink, created a world meant to satisfy the hungry eyes with its bold colour palette and sombre shadowy trees.

Fe is unmistakably beautiful, there is no doubt here. You will notice how vibrant the blues, purples and oranges are in one area and then it will change to greys and blacks, sometimes depending on how the story is unfolding.  From the deep and old forest, filled with life; to the frozen and barren mountains, each landscape offers beautiful sceneries that 3D artist Maria Svenningsson captures so well.

One of the most stunning moments is when you get to climb a gigantic deer, the sheer scale and attention to detail regarding this beautiful creature was astonishing. Each leg on the deer was peppered with small spruce trees that you had to climb to get to the top of the deer to communicate with it. You could, and should, spend a lot of time soaking in the wonderful atmosphere that Zoink so thoughtfully crafted.

Sound in a game is incredibly important because it makes you feel things that words and vision can’t always do. Zoink knew the importance of this when it came to Fe and overflowed the eardrums with pure pleasure.

As I said at the beginning of my review, even before I played Fe, the start menu music with its slow cello hum had me already set for what was to come. Communication via sound is what drives Fe, since it has no dialogue, and it’s also what sets it out against so many other games of its genre. Voice Artists Kristina Issa and Kellen Goff provided the sounds of the unusual animals while the frogs, crickets and waterfalls heard in the game were actually recorded during a trip to an island outside of Thailand by Joel Bille, Composer and sound designer at Zoink games. You can have a listen to some of the incredible sounds you will encounter on your journey into the enchanting forest here – https://www.ea.com/games/fe/news/the-sound-of-fe

Fe needs to be enjoyed one bite at a time and savoured. Rushing this game will not only ruin the experience but, also the entire point.

Saying that, there will be many places and secrets you won’t necessarily find on your first run-through of Fe, even with great exploration. if you were set on just completing the “main quest” you’re looking about 7-8 hours. Then you are free to roam around and find all the secrets and that really depends on the player how much time that takes. Fe is, without doubt, a place you can visit many times when you need to get away from the world, to explore another one or just to come to see the friends you made and yelp/howl at each other!

I’m not sure how much I can express using words to tell you how much I enjoyed Fe, It was probably the greatest pleasure I’ve had in an Indie game. The sheer beauty of this little creature facing a world that was crumbling around it was incredibly emotional but heart-warming.

For me personally, Fe is life imitating art far more than art imitates life. It’s a stark reminder of our own world where humans are slowly destroying our own planet and the challenges animals face on a daily basis. This wasn’t lost on me and I’m sure Zoink had this thought process at the fore-front when creating Fe.

I went into this game knowing I had to play it with my heart rather than my mind as so many situations required that feeling to understand it. Zoink deserve every single bit of praise they get for Fe and most definitely have firmly set themselves among the greats in the gaming world. Fe receives an ‘enchantingly beautiful’ Thumb Culture Platinum Award.