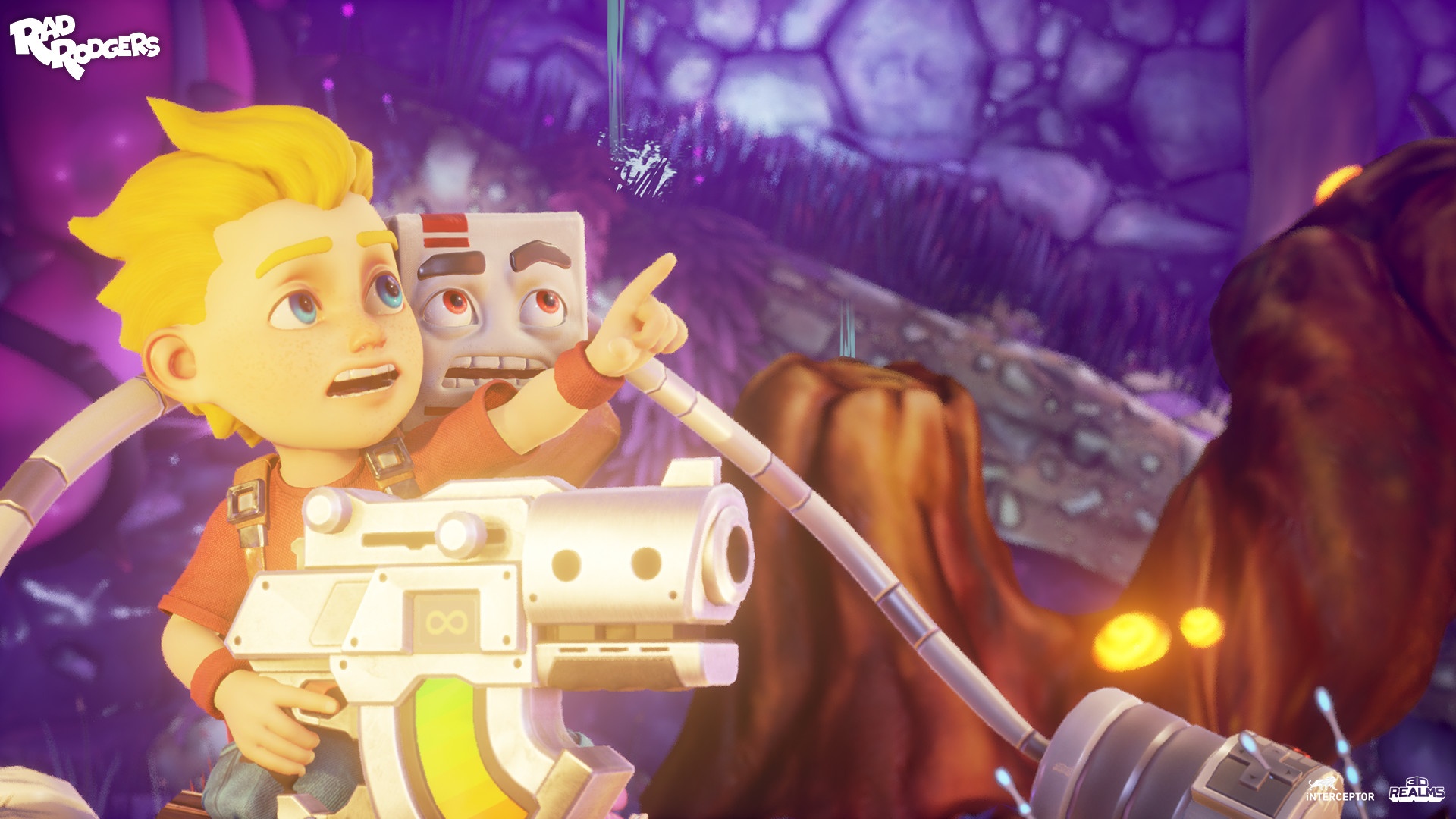 Rad Rogers published by THQ Nordic, is a new take on an old classic. The side scrolling platformer! You take the controls of Rad Rogers, a rambunctious but spirited young boy who maybe plays too many video games. After dozing off at the tail end of a long night of gaming, Rad awakens to find his dusty old console has turned itself back on. Suddenly a vortex emerges and he’s sucked into his TV, where he finds himself the star in his very own video game adventure.

Dusty is Rad’s good-hearted but foul-mouthed, now-sentient game console. His clock speed isn’t what it used to be, but what he lacks for in megahertz he makes up for with experience and attitude!

Rad & Dusty’s adventure begins in the First World, taking them through seven dangerous stages of action-packed, humor-filled, hardcore platforming fun. This decaying jungle world has been infected by a fierce corruption, and it’s up to the unlikely buddy-duo Rad and Dusty to save the jungle’s inhabitants and restore the Elder Tree as guardian of the land.

Essentially what Rad Rogers is, is a straight forward platformer, but with a few different elements. Most of the time you will be controlling Rad, but you do every now and again have to control Dusty, in these instances you are sent into the Pixelverse, a dangerous spacetime-breaking region that exists behind the game world. Dusty enters the Pixelverse when necessary to repair glitches in the running game world, allowing both Rad & Dusty to continue their journey.

To take down your enemies throughout your journey you have the Bolt Blaster, with its unlimited ammo its easy to use and the gun that you will mostly be using. There are a number of other guns throughout world one, one of which is the Phoenix Cannon. The Phoenic Cannon shoots out a fiery bird whose wingspan lights enemies ablaze as it flies by. There are 5+ weapons in this first chapter, with more to come.

Traversing across platforms is carried out with a simple jump button, keeping it straight forward allows you to concentrate on the rest of the action. Using jump pads to reach those higher levels and bars that Dusty can grab hold of to allow you traverse larger gaps and up the sides of some walls.

To complete each level you have to find four parts of a key, these are dotted around the levels, and in some cases you do end up wandering around for a while before stumbling upon the next section of the level. This is probably the one annoying feature of this game.

The graphics are great, they’re colourful, bright and bold. Rad Rogers takes a nod back to classic 8-bit graphics now and again when you approach the entrance to the pixelverse.

Having a photo mode on the game also allows you to take some pretty nice close ups of Rad and Dusty, getting their facial expressions that you would normally miss when playing from the standard viewpoint.

With Dusty on your back Rad Rogers is littered with bad language and nods back to the classic era of the platform game. Add to that the retro styled soundtrack created by Andrew Hulshult combining his years of musical experience to bring some MIDI-inspired music, as well as synthesizers!

The rest of the sound effects are spot on for the game, they are definitely not out of place in Rad Rogers, and neither would they be out of place in the whole platform genre.

With the PS4 / XBO version of the game losing the “world one” subtitle that the original PC version had, you would be fooled into thinking that this was the complete game, however the game starts and ends with the jungle world…for now.

The game is a collectable dream, with crystals, hats, lives, enemies and more to find and collect / kill.

Obviously game time for this is over relatively quickly due to the single world available, but with the added bonus of all those collectables it does add more time. Thankfully this game isn’t a full priced AAA title, its a moderately priced Indie title and is well worth your money and time.

Rad Rogers delivers on all aspects, with some challenging platform elements, great shooting aspects, and loads to collect, this game is a must for anyone looking to traverse back into the pixelverse of the 8 bit shooter. Rad Rogers receives the Thumb Culture Gold Award.