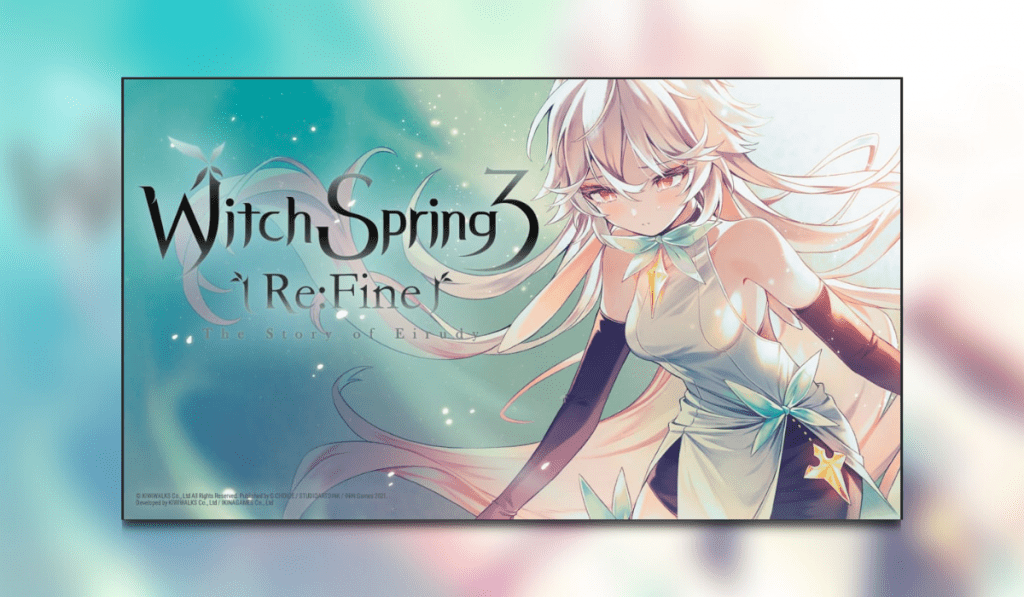 Developed and Published by Kiwiwalks. Witch Spring 3 is a continuation story in the Witch Spring series. It has the same director as the two previous installments so already full marks for keeping the original team. So let’s head to the continent of Derkarr and see what’s on offer for this Witch Spring 3 – Switch Review.

Having spent a huge majority of my gaming life playing RPGs it came as no surprise that I would leap on the review for this. What is surprising is that I had never heard of WitchSpring before. Mainly because the first two installments were released on mobile with Witch Spring 3 being the first one to get a console release. So let us jump into this WitchSpring review on the Switch. If you enjoyed this little review then you can check out my previous one here. You can also check out what the rest of the Thumb Culture team are up to on our social media.

I think it’s safe to say now that every RPG or JRPG gets at least a little inspiration from the Dragon Quest and Final Fantasy series. Witch Spring 3 is no exception but it isn’t just another clone where it’s the same thing over and over again. The game does have some originality to it. The story follows a deity named Eirudy, who lives in seclusion in the dangerous Misty Forest with only dolls to accompany her. Longing to make real friends, she one day meets a human boy and her life completely changes. It’s actually a tragic story as Eirudy lives alone with only her dolls to keep her company but the dolls she brings to life through magic cannot speak. You can go to the surrounding forest to get ingredients that you use to level up magic or dolls.

One thing that is interesting is the leveling up system as you do the usual by defeating monsters. But you spend these experience points at the end of an in-game day and train up in a variety of different areas. Such as fighting, magic, speed, vitality, you know the usual options. You can also choose which growth path to go down. There is the Swordsman, magician, and the Summoner which lets you summon the dolls you awaken to help you in battle. The dolls are both cute and yet absolutely terrifying because some of them can really creep you out. A great addition to the game is that there are many storyline choices to make along the way, which can ultimately lead to a good ending or a bad ending.

Speaking of different endings. I won’t give too much away but the good ending is way worth it. Now for a franchise that gets its first console port, it does still feel very much like a mobile game. The graphics and gameplay are good don’t get me wrong but it has that mobile game aura to it.

The audio is great with a brand new official soundtrack. With each piece of music fitting in perfectly with the setting of the game. The graphics on the other hand are pretty much what you see in a mobile game. Don’t get me wrong some of the artwork is great with that distinctive JRPG style. But I feel like there are some areas that could have been done with a little bit more work. Each screen you enter in the forest just looks the same and just feels like some color wouldn’t have hurt.

This game will not take you long at all to play through. You will finish the game in around 15 or 20 hours. This is a shame because there is so much that the game has to offer. There are two different endings. A good ending and a bad ending. I never got the bad ending so I have no idea what happens. But the good ending is worth getting just for the extra perks. Like I said earlier I ain’t giving anything away so you’ll just have to play the game and find out for yourself.

My final thought is that Witch Spring 3 is a decent game. It really is a game for the JRPG fans and of course the WitchSpring series fans. I enjoyed the many hours I put into it without getting bored or burned out which can happen to a lot of these types of games. The story is intriguing with great characters and well. You’ll just have to play it and find out for yourself. So it is now that I give Witch Spring 3 the Thumb Culture Silver Award.