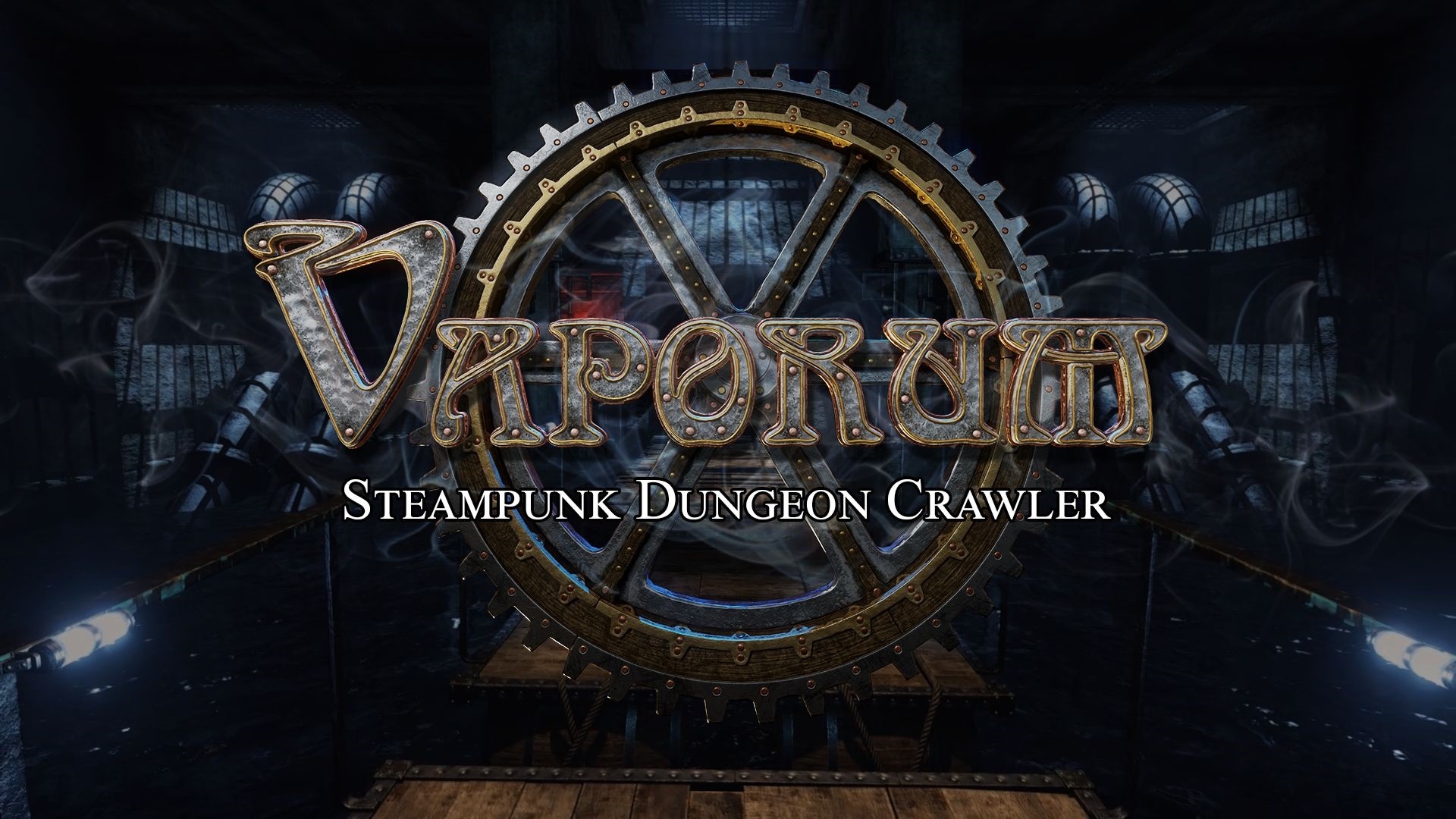 Vaporum, by developer Fatbot Games and published by Merge Games, is a steampunk dungeon crawler with a simple movement concept that takes you right back to the original style first conceived in the 1988 epic Dungeon Master by FTL Games.

Available originally on PC and Mac, the transition to consoles has taken nearly 2 years, however, it is finally here for Xbox One and PS4 on April 10th and Nintendo Switch the following day.

Are you ready to confront fear and the ensuing perils? Enter, stranger…

Stranded in the middle of the sea on a small island you have no choice but to enter an odd, and out of place, gigantic mechanical tower.  At first it appears all new to you, however, the place around you starts to get awfully familiar.

Movement around the tower is first person and also grid based.  You can go forward, back, left and right as well as turn in 90-degree segments on the spot.

If you love a good backstory then you can find various notes dotted within lockers and chests that reveal tidbits of information, however, if you are more of a smash and dash kind of person then fear not brave warrior for the main story plot is infact told by the main characters and fully voiced.

Starting with more or less nothing, you slowly begin to accrue weapons as you quickly realise that you are far from alone on your voyage of exploration.  Mechanical monsters such as welder drones stalk corridors as cogs turn and grind around you.  Tactics are down to you however it is a good idea to keep moving and also not to back yourself into a corner.  All movement is recorded onto a map which begins blank and slowly creates itself as you have explored that part of the grid.  If you want the true Dungeon Master experience you can choose to start the game with the map function turned off meaning you need a pen and paper to hand so that you do not get lost in the haunting catacombs, great touch.

Combat in Vaporum takes place in real-time with each enemy you discover having a distinctive set of strengths and weaknesses that you will need to exploit if you want to survive.  Similar to traditional games of this nature, each weapon yields different damage stats as well as unique bonuses or abilities.  You can choose to either hold one weapon, or indeed dual wield, but prepare to suffer a precision penalty.  One ability that you do have to hand is to freeze time which effectively pauses everything, putting the screen into a black and white composition and gives you time to breathe, plot your next move, or indeed change your underwear.  You can use this feature as much as you need, however I usually just took the pain and plunged right into combat.

Who loves puzzles? I do! Vaporum is full of them as you navigate through the dark and claustrophobic alleys.  From pressure pads controlling doors, timed switches that require quick precise movement to searching for keys and looking for secret areas, Vaporum will test your wits and reflexes.  Puzzles start fairly simple and based in just one room and build up to span entire levels.

Character progression is enjoyable as you get to select your very own Exo-rig that enhances your abilities.  Which one you choose it upto you as each one comes with it’s own unique benefits.  I chose the Thauma rig and immediately set about equipping various gadgets to it that you find along the way and then unleashing them onto the enemy.  The more enemies you destroy, the more powerful your rig becomes as it absorbs their energy, known as fumium.  This in-turn allows you to upgrade your “circuits”, gaining significant attribute bonuses and passive skills.  The customisation options are massive and rewarding.

Playing Vaporum on the PS4 was actually a refreshing experience as the grid-based movement, combat and interactions were very easy to get used to on the controller, something I wasn’t sure about at first as traditionally dungeon crawlers are best played on keyboard and mouse in my opinion.  Although there is a cursor that you can use to navigate the screen with, you can also quickly ping to searchable items with a press of a button.

Vaporum looks stunning on the PS4 Pro with crystal clear rendered screens and brilliant lighting effects.  The various detailed enemies comprise of both mechanical, and on occasion, flesh-like bodies as they scuttle, glide and wander the corridors.  They are scary from the shadowy backgrounds let alone up close and personal.  If you want to take a safe look at the beasties you have so far encountered there is an Arx-Pedia available in the main menu that lets you peruse through the monsters such as Spiderlings, Shock Spiders, Acid Roaches while changing camera angles and activating their combat animations.

The soundtrack to Vaporum is set to a mysterious and eerie Sherlock Holmes style theme which helps create the mood for the steampunk tower exploration.  Within the game the tower is full of life from the clanking and clunking of metal gears and squeaking pistons to the wooshing of fireballs thundering from outlets in the walls.  If you listen very carefully you may just be able to hear that Spiderling scuttling it’s tin-like legs across the cold floor.  If you don’t then prepare to jump as you round that next corner.  I did jump out of my skin on one occasion, not expecting an enemy to appear where they did!

Vaporum has around 15 hours worth of gameplay to conquer and many secrets to discover.  Will you solve the mystery of the tower and get out alive? or will you succumb to the monsters that lie in wait for you?

Having played Dungeon Master when I was young lad along with gems such as Bloodwych, Eye of the Beholder, heck even the original Doom, I love grid-based dungeon crawlers.  Playing Vaporum brought back the nostalgia and to have it in a gothic steampunk setting really made this game something special for me.  Breaking from the shackles of PC and launching onto multiple platforms, Vaporum brings back the genre both immersively and beautifully.

Disclaimer: A review code was issued in order to scare the crap out of Jas, it was worth it.