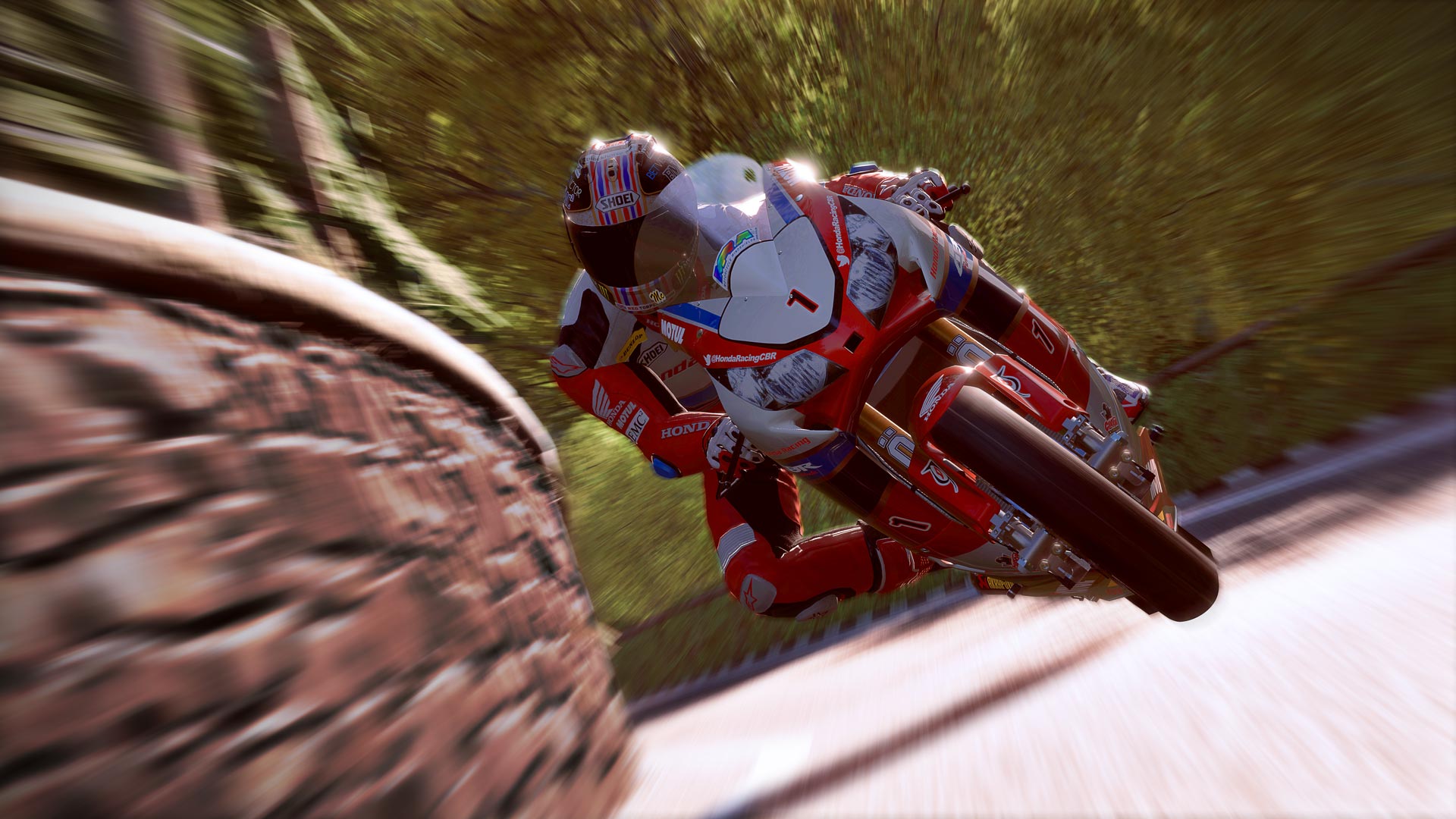 The Isle of Man TT (Tourist Trophy) is possibly one of the most intense racing events in the world, claiming many lives throughout its history, but with the dangers come one of the most beautiful and challenging races. With all this incredible history and importance, Bigben Interactive have taken on the mantle to recreate the beautiful event with TT Isle of Man – Ride On The Edge

In essence TT Isle of Man is a street racing game, around the picturesque Isle of Man, the race itself covering 61km of public roads that each year gets closed off to allow Superbikes and Supersport bikes to fly through. With its 264 turns it is more dangerous than all of the GP tracks put together. Each year claiming brave riders lives who push their bike to the extreme limits and beyond.

Bigben Interactive have taken the big mantle to recreate the race in all it’s glory and to my surprise, it is a much deeper game than I expected to find. With a career mode, solo races, and multiplayer to get to grips with, the game is no walk in the park. Where the lack of game modes and tracks (10 tracks are available) might put you off, please don’t, you really have to play this game for the riding mechanics on it’s own. With realistic movement and giving a true sensation of riding, even the TT Isle of Man riders themselves have authenticated this.

With 24 riders and 38 bikes to chose from there is a multitude of options for taking to the streets, and this is where the game shines. The way that the rider moves on the bike is incredibly realistic, from slight shifting of the weight onto the front to get more aerodynamics, to full on leaning into corners.

When starting up the game for the first time you do get a nice in depth but straight forward tutorial that gives you a taste of the difficulty that the game can bring to the party TT Isle of Man is savage. I am currently playing through on the setting with the most assists and I still feel success when I manage to get through a whole race without falling off. Dropping down the traction control you really need to be gentle when you come out of corners, pull the throttle too quickly and you are literally just going to spin out. Brake when you are turning and your bike will just slide out from underneath you.

Heading into the career mode you are given the money to purchase your first bike and from there you take part in events throughout the calendar, earning money to go towards tuning your current bike or purchasing new bikes for use in different events. All these events culminate in the TT Isle of Man race, how far can you go on the track without coming free from your bike?

TT Isle of Man has some of the most beautiful visuals I have seen on a video game. Bigben have done an incredible job with recreating every inch of the TT course, riding around the course is an absolute charm. Each section of the course are shown as an element on your HUD, although taking your eyes off the screen can send you straight into a wall. So keep your eyes on the track and hit those breaking points.

With a number of camera angles to make use of, from a nice distant camera showing a great viewpoint of the surrounding environments to the standard rider camera showing the front windscreen. Each option is great and allows for a different feeling of speed, personally the follow camera is my favourite, allowing me to hit the apexs on those corners and even get those left to right turns spot on.

Once element of the game that impressed me the most on TT Isle of Man was the vegetation. The trees, and the bushes around the track were impecible and really gave depth to the game. Flying through leafy areas and dark tree covered areas was a delight in comparison to the bright open sections through the hills of the Isle of Man.

TT Isle of Man is LOUD! Incredibly LOUD, revving your engine on the starting line is incredible. With great sound however, comes great responsibility and Bigben Interactive have seemed to put a lot of effort into the sound on the game and its greatly received. Without the sounds the game would fall a bit flat.

Whilst you might be reading this and saying “hmm, only 10 tracks and the Manx TT course, that doesn’t sound a lot” well on the face of it you would be correct, however the real longevity of TT Isle of Man comes in the form of the different racing modes, starting off on the highest assist setting it will take you a while to be able to nail the game and all its corners. Once you have, taken down the settings a little bit and start again.

TT Isle of Man is a true game for racing fans. Yes there have been a whole myriad of racing games in the past but there is just something about the realism of this one that appeals on a totally different level. Perhaps its the familiarity with the event that I have, or perhaps its the details that Bigben Interactive have put into the game.

Lets just hope that they continue to put this kind of details into their games going foward. Oh and maybe a Guy Martin DLC. TT Isle of Man gets a Thumb Culture Gold Award.

One thought on “TT Isle of Man – Riding on the OMG I FELL OFF!”