Ruiner is a Cyberpunk anime stylised top-down action shooter. It’s the debut release from Reikon Games and produced by Devolver Digital. Before we delve too deeply into the world of Ruiner, as its Reikon Games’ debut, I just wanted to give you a little info into their background. Reikon is a studio based in Warsaw that was founded in 2014. Four veteran game designers who have such titles as The Witcher Series, Dying Light and Shadow Warrior to their name. With that level of experience and knowledge, I’m pretty excited to see what they have given us in their first Indi release.

Ruiner is very much a story driven game set in the year 2091 in a Metropolis known as Rengkok. You take on the role of a somewhat augmented man/machine sociopath hybrid who goes on a brutal vendetta after a voice in his head tells him to. When this goes horribly wrong he finds himself on a rescue mission to save his brother, with a little help along the way. It’s very much a typical revenge story pulling from classic Cyberpunk Sci-Fi material like Blade Runner, Ghost in the Shell etc. All this sounds perfect for a game, but is it any good?

Welcome to The Ruiner Review!

Ruiner is one of those games that pretty much lives up to the saying ‘what you see is what you get’. It’s an action shooter and as such don’t expect an overly detailed game structure. The basis here is to shoot your way through hoards and hoards of bad guys, in a room by room basis. Ruiner is not a game for someone who doesn’t enjoy punishment.. You WILL die. and you will die MANY TIMES!! But there isn’t really a punishment for dying (unless you count the game lagging at your punishment?). Luckily the game just throws you straight back into that same room of death to try again exactly where you left off.

There’s some RPG style elements to this game which I like. These involve collecting Karma points, which are essentially currency. They enable you to upgrade your abilities. They’re fairly easy to come by at first, but don’t ignore them as you will need them later. The game is very unforgiving if you don’t have the right abilities to take on the level. 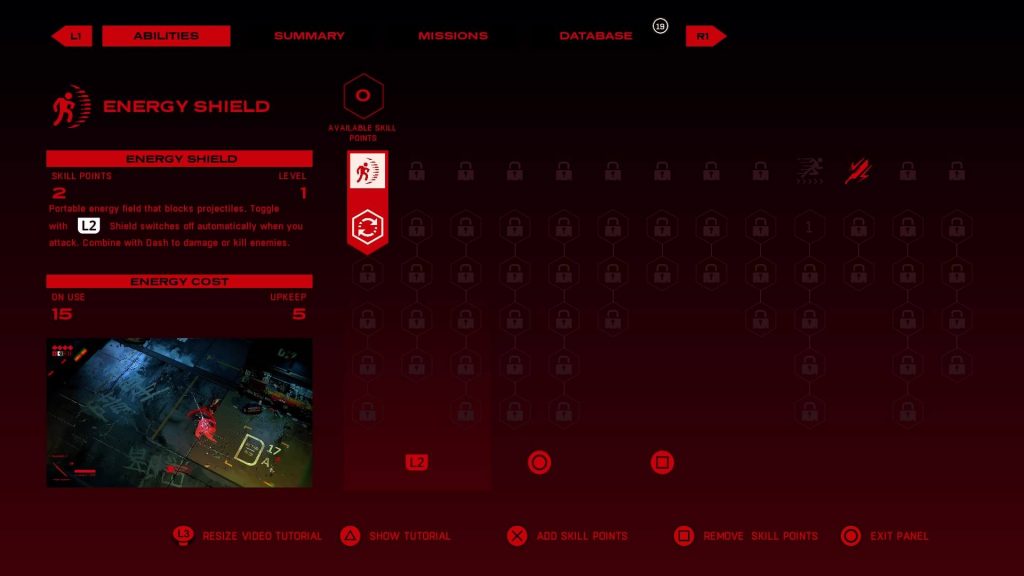 Hmm.. Do I want a Shield or Extra Ammo?

Now comes a few of the problems that I have. There’s such a lack of variety in the gameplay, which I won’t lie, does become very repetitive very quickly. Most of the levels look the same, they remind me very much of something out of the end of  Terminator 2. There is nothing really to explore here, which is a shame as the world looks beautiful. Every level is a series of basic corridors that lead to a room full of enemies that need to be killed. Unfortunately even the boss battles follow the same principle. After so long it becomes more about finding the breaks between the onslaught. Rather than looking forward to the next challenge.

Finally my last issue comes from the controls. Because of the frantic brutal nature of the combat it’s very awkward to aim the guns properly and most of the time you’ll find you’re facing the wrong direction and as such will die (again!). Maybe it’s more to do with the games I play. But having one stick to walk and the other to turn felt rather unnatural in the middle of a fight. 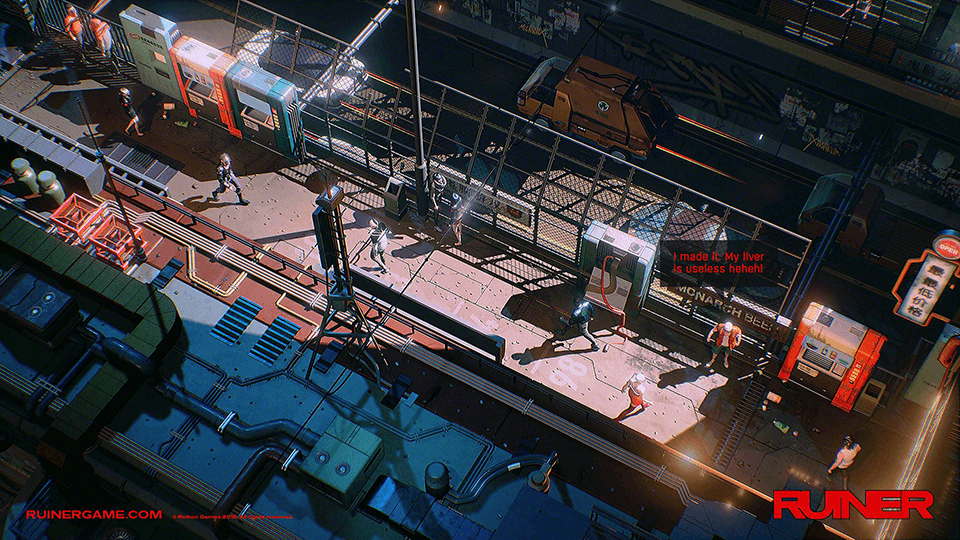 Who needs a liver anyway?

The Cyberpunk Anime style in Ruiner looks stunning. Rather than video cut scenes, they have opted for a comic style still image with text along the bottom of the screen. This adds a nice overall feel. I’m not generally a huge fan of the top down visual but its hard to deny that here it looks crisp, clean and when there isn’t blood flying everywhere it does make you think of a futuristic world. 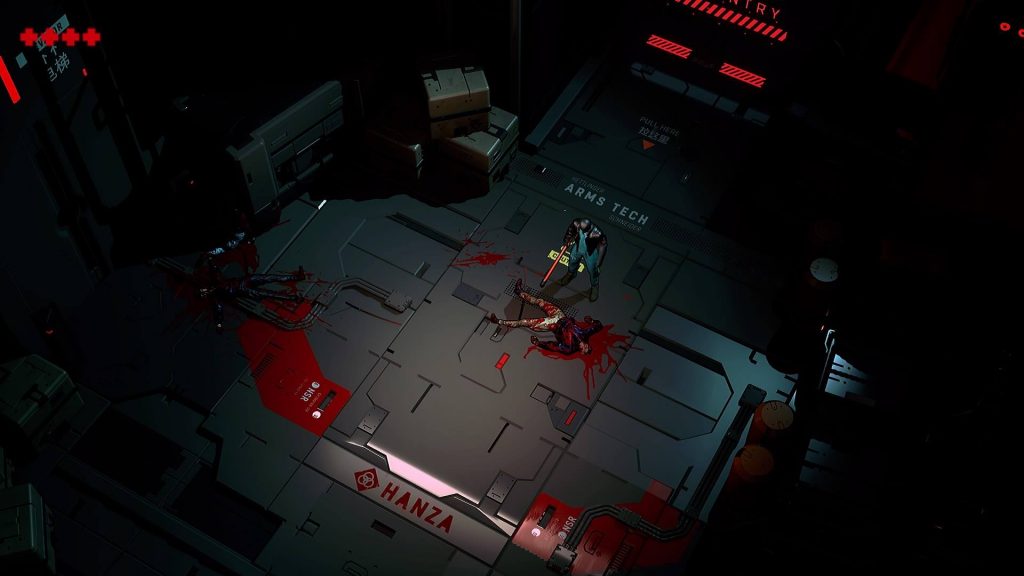 Did I do that?

One thing I like to do with action games when I’m trying to critique is look at explosions. Do they look real? What sort of carnage do they leave behind? Unfortunately here there isn’t any Carnage. The flames look decent, but the surrounding area goes back to looking like it’s just been cleaned. Disappointing!

The music here is very subtle for the most part. It does offer a menacing tone (in the Techno Genre) to perfectly fit the sadistic and brutal gameplay without moving very far away from the Cyberpunk styling. Given the art choice of the game there isn’t really any voice acting or character audio to critique as such. That only leaves the sound effects of the explosions and weaponry which I would say is adequate. It’s hardly groundbreaking but it does the job without any real problems.

This is where I believe there will be a few issues. The game itself is a painful hard slog to complete. I truly think a high number of people will just not bother to do so. Consequently they will miss the fun. As when you get there it’s actually more enjoyable to replay (and it appears the bulk of other reviewers also agree!). The reason for this is that you now have a huge array of weapons and abilities to pick from to destroy the waves of enemies.

There aren’t a lot of trophies on offer here. For those of you that are looking at it to platinum, I wish you luck!

This is exactly how the game makes you feel!

In conclusion, Ruiner is a game for people who enjoy being beaten into a pulp and then come back for more. By design it wants you to feel like the people who you’ve just used to paint the walls red. The casual gamer will struggle here, purely due to unforgiving nature and difficulty.

Be sure to check out our Social Media pages. Subscribe/Like/Follow to keep up to date with all the gaming news and reviews:

Disclaimer: A code was provided for us to do this review.