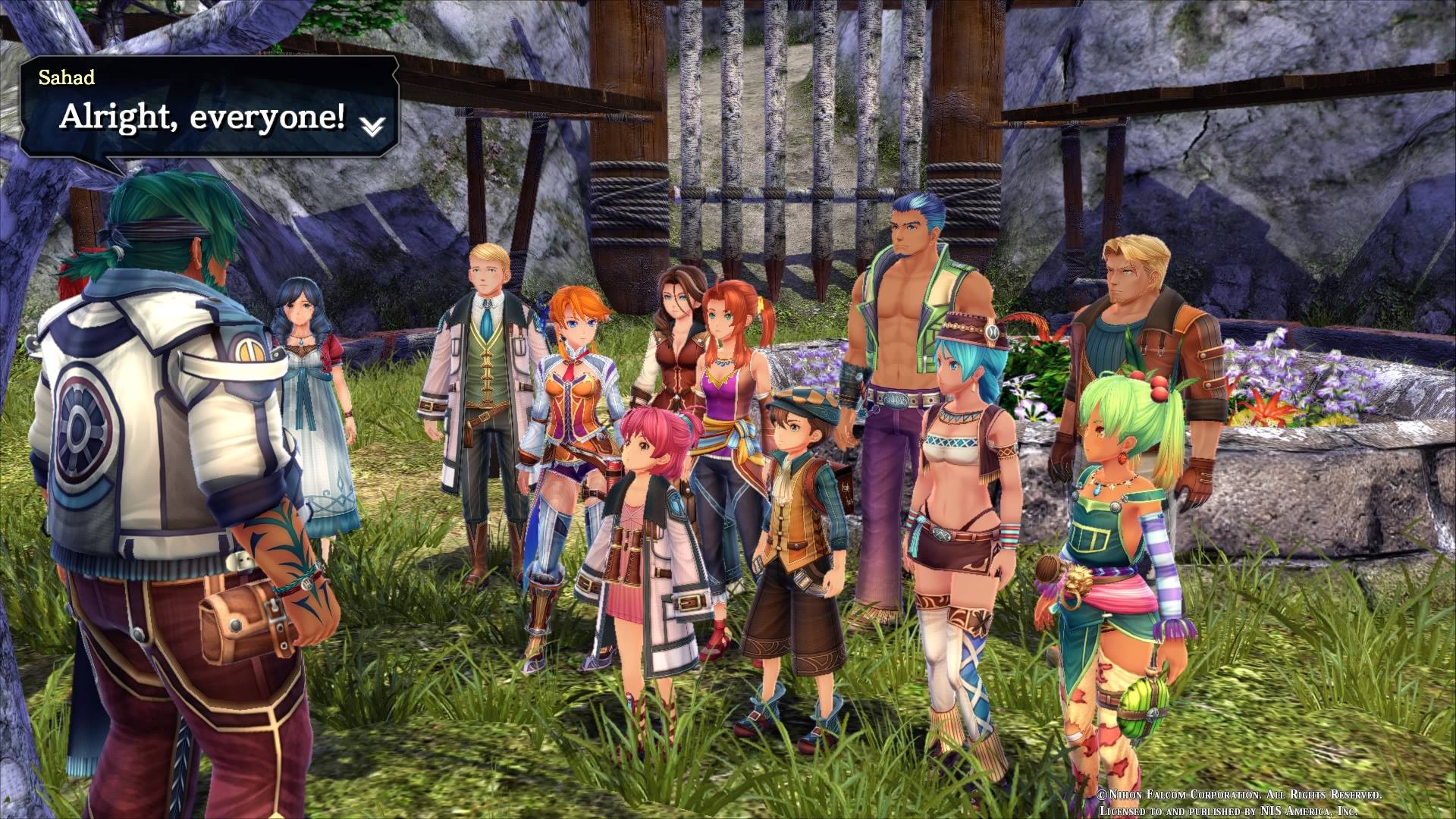 Since 1987 the red-headed Adol Christin has been constantly entangled in legendary adventures in the Y’s series (pronounced like “ease”). He is always somehow at the right place at the right time to embark on the most JRPG of JRPG tropes. Plots to destroy the world, legendary monsters, evil gods, amnesia, demons, annnnnddddd you get the picture. The next installment of the series, Y’s VIII: Lacrimosa Of Dana, has finally arrived on the PS4.

I have been an avid JRPG fan ever since I began gaming as a young lad on the SNES with amazing games such as Chrono Trigger, Final Fantasy 3, Earthbound, etc. I somehow never got involved with the Y’s series in all the years, so Y’s VIII: Lacrimosa Of Dana was my first foray into the saga. It felt like an advantage not having any expectations or baggage from the previous games and thus I was able objectively review Y’s VIII for what it is. I was however perhaps at a possible disadvantage of not knowing any of the lore and previous stories, but upon further research, I have found the Y’s series is not known for its strength in storytelling, that is, until now.

The game opens with Adol and his pal Dogi aboard the sea faring vessel Lombardia headed toward Eresia. The ship is suddenly attacked by a gigantic sea monster which functions nicely as a small tutorial of how some of the battle mechanics work in the game. Inevitably the ship is taken down and you are washed ashore on Seiren Island, a legendary island, a cursed island, one that no one has ever escaped.

Your task on the island is to find other castaways from the Lombardia and band together to survive. You set up a small encampment that slowly grows as you find more people washed ashore, and with each new character comes a new set of stories, side quests, and shops. This is an aspect of the game that really grew on me as it progressed. The developers also did a great job of creating a wide variety of characters who all have unique and interesting backgrounds that you slowly poke and prod into as the game progresses.

One of the coolest parts of the game was the evolution of the story/goals and the unexpected twists and turns it takes. From the beginning, it seems like you are just exploring the island trying to find people so you can survive. Then it turns into a game of trying to figure out ways to get off the island. Then you are thrown a massive curve ball when you get over the giant mountain to the second half of the island. The story drastically changes into one of an ancient civilization and a mysterious girl name Dana. You are then trying to unearth the unknown aspects of her character or origin and how Adol ties into all of this.

The battle system of Y’s VIII: Lacrimosa Of Dana is fast and dynamic. It is based off a rock/paper/scissors system where you need to alternate characters to break certain types of enemies’ defenses. One thing that I really like in the game is the character switching. It is instantaneous and your camera doesn’t have to fly over to the character you are selecting, you simply just morph into the next character. I find it disorienting in fast action games when the camera swings around to another character so it seems that Y’s VIII came up with a simple and effective solution to this. Being a JRPG you have your typical tropes of faster attacking female, middle ground main character, and a large massive striking type character. Well timed dodges are guards are rewarded in this game with a time slow down mechanic or a boost to your special attack meter.

The sense of exploration in this game is massive. You are rewarded for exploring every nook and cranny on the massive island and your map fills in as you uncover new areas. The developers were smart to include a percentage chart for each area that shows you your reveal rate, treasures located, and harvest points. This makes it way less confusing at the end if you are going for a completionist run (I wish more developers did this so you didn’t have to resort to guides to find what you missed).

The graphics are what you would expect out of a JRPG. Characters wear ridiculous outfits, breasts to waists ratios are insane, colors are vibrant, and character design charming. There are a few anime cut scenes throughout the game which look superb, my only wish was that they used them more.

The UI and map interface are done well and it is easy to read and see all the required info at hand. Enemy design is interesting and diverges more toward the prehistoric era the further you progress in the game. All in all, the graphics of the game are a treat to look at!

I have always heard the Y’s series has been known for having kick-ass music and after my playthrough of Y’s VIII: Lacrimosa Of Dana, boy do I whole heartedly agree. The simplest way I can describe the music is JRPG metal. The music is fast with an aggressive edge, a double bass drum is always hammering away, and a guitar is pushing forward a memorable lead line that sticks in your head (My wife and I would find ourselves humming these leads throughout the day when I wasn’t playing).

At first it seemed odd to me because I haven’t heard music quite like this, especially in a JRPG, but the longer I played the more I loved it. The music fits perfectly with the fast action of the active battle system. This is especially true during the boss battles which has a sense of urgency and creates more tension to the battles.

There are also some softer songs that make their way in and out of the game at the right moments. Be it during a morose part of the story or traveling through a dark mysterious cave. Sound effects are great and snappy. It feels good when you pull off a successful dodge and guard and are cued with a rushing sound.

I sunk a good 60+ hours into my playthrough of Y’s VIII: Lacrimosa Of Dana. Being a trophy/achievement hunter and avid completionist, I had no shortage of things to occupy myself with whether it be side quests, fishing, growing crops, crafting, or collecting every item in the game. The island is huge and the environments varied so there is lots to explore. I played the game on normal difficulty but there are three more difficulties above that you could sink your teeth into on subsequent playthroughs.

Y’s VIII: Lacrimosa Of Dana is a fantastic JRPG and a series that I am happy I finally jumped in to. The game is rife with side quests and things to do. The island is massive and you gain a great sense of exploration as you progress further and further into the game. The story has many twists and turns and the characters are varied and interesting.

The music kicks so much ass and the fast and active combat system keep you from having that grinding feeling that you get from most JRPG’s. The styling is great and the graphics are colorful. This is a game I would highly recommend to any JRPG lover or someone who doesn’t like the turn base combat of traditional JRPG’s. I give Y’s VIII: Lacrimosa Of Dana the Thumb Culture Platinum Award. A must play for any JRPG fans!