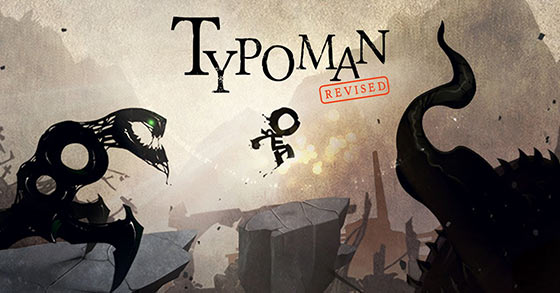 Typoman Revised is an independent video game developed by Brainseed Factory for Xbox One, PlayStation 4, PC and Nintendo Switch. This game follows a hero named Typoman who crafts words to alter the environment around him. The revised version implements several design and graphical improvements so, without further ado, let’s jump into this review with as little typos as possible!

Typoman Revised is a 2D puzzle platformer. Players take on the role of a character made of letters, struggling to make his way through a dark and hostile world. What makes Typoman stand out, however, is his ability to craft words that can alter the environment. For example, crafting the word RAIN can bring about a storm or crafting COVER will protect you from enemies. But choose your words wisely. They can either be a blessing or a curse! The alphabet is your tool in this world as you rearrange and experiment with tangible words. Taking ‘no’ and switching it around turns it into the word ‘on’, which can be used to power a nearby switch. Dangerous words like ‘trap’ and ‘gas’ will kill you in ways their definitions suggest, but if you find a way to exploit them, you’ll find a way to progress.

Typoman is completely devoid of direct combat. Rather, progress is about negotiating isolated set-piece situations by physically shuffling around letters to form words that will bring the silhouetted world around you to life. I found myself completely stuck at one point and dying time and time again because I couldn’t for the life of me work out how to rearrange a particular word to stop myself from choking on gas! Eventually I did overcome this obstacle that really wasn’t that difficult but, this is what typoman does, it makes you doubt yourself.

Typoman is beautifully horrific in its style. With such eerie backdrops of destroyed buildings and mechanical equipment, it really does add to the entire feel of this game, and that’s unease. Its use of creepy silhouettes against a dark and gloomy background evokes the same style as another great game called LIMBO. Throughout the game, a few other brighter colours will appear, normally meaning something good is happening, acting as a contrast that reinforces the idea of good vs evil that this game is all about.

For me, the audio isn’t nearly as good as the visuals and that’s ok as it’s what you see in this game that matters and not what you hear. The sounds are quite basic but effective so, there really wasn’t a need for anything too grand, this isn’t the concept of Typoman. The sounds that I did hear played well into the game, keeping with that eerie, cold structure it implemented so well. SonicPicnic, who produced and composed all of the music, did an excellent job with slow violins and cellos, married with the chime of bells and some electronic hums. Have a listen right here – https://sonicpicnic.bandcamp.com/album/typoman-ost

There are 2 mini-games that are unlocked as soon as you finished the main game: The Antonymizer and Word Hunter. These modes can be fun when you play once or twice, but in the long term, it can get repetitive, as there isn’t a leader board or any reward to act as an incentive for you to play it. The main game can be completed in around 4/5 hours and since most of the puzzles can only be solved with specific words, you don’t have any reason to redo them (in the other versions, you have the incentive of achievements, but since Switch doesn’t have them, they aren’t implemented in-game and there’s no need for a repeat performance.) Also, the only collectable that is available in Typoman are words you find while you spell out other words that are progressing you in the game.

Typoman is a lot of fun to play and I found myself engrossed for hours snuggled up on the sofa with my switch late into the night. I loved the concept of it, frustrating at times but, this didn’t spoil my game play in the slightest. Birdseed Factory have developed a very clever game that incorporates so many aspects into it that just made it work. The only down side would be re-playability by its limited length. Even with the mini-games, it unfortunately didn’t extend the game. I would have also liked more achievements as this would most definitely make me want to come back and spend even more hours playing. All in all, Typoman is an amazing game that will leave you wondering where the time has gone due to the immersive pull it has over the player. I’m very pleased to give Typoman: Revised a Thumb Culture Gold Award.