Outward PC & Xbox Review – How To Die From A Stubbed Toe

Outward is the open world/ survival/ death sim you always wanted. Developed by Nine Dots Studio and Published by Deep Silver this game is a labour of love to everyone who loves dark souls but thought it was to easy. If you ever wondered if you can die from a cold just as easily as a bird/bear/goblin/bad food. That just the tip of the iceberg. Read on to my review and explore my journey of death

Have you ever wondered what would happen if you were not special? If you started a game and right away it lets you know you are the bottom rung of your tribe. You don’t have powers and something as simple as a cold winters night can kill you. Well, this is how Outward describes itself in its opening trailer. You play the part of a disgraced member of a family that owes quite a debt to the village. Because of this you are treated and talked to like dirt.

So now that you know where you start here is how you proceed. Outward gives you the basic but there is a steep learning curve. I can not suggest enough to do the tutorial! I started on the PC version by myself and got killed immediately by an angry chicken thing. I was not prepared and thought I could just wing my way through Outward. Luckily I have a friend who is a veteran of the Dark Soul series to come to guide my hand through everything wanting to kill me. I then purchased Outward on the Xbox One with my friend and we gave the CO-OP a try. Outward plays exactly like Dark Souls. The combat is very similar as is dodging and timing your parry. There is a multitude of weapons most of which you can craft. The Co-op play great and having a friend made a huge difference because now there where two targets for various monsters to attack. 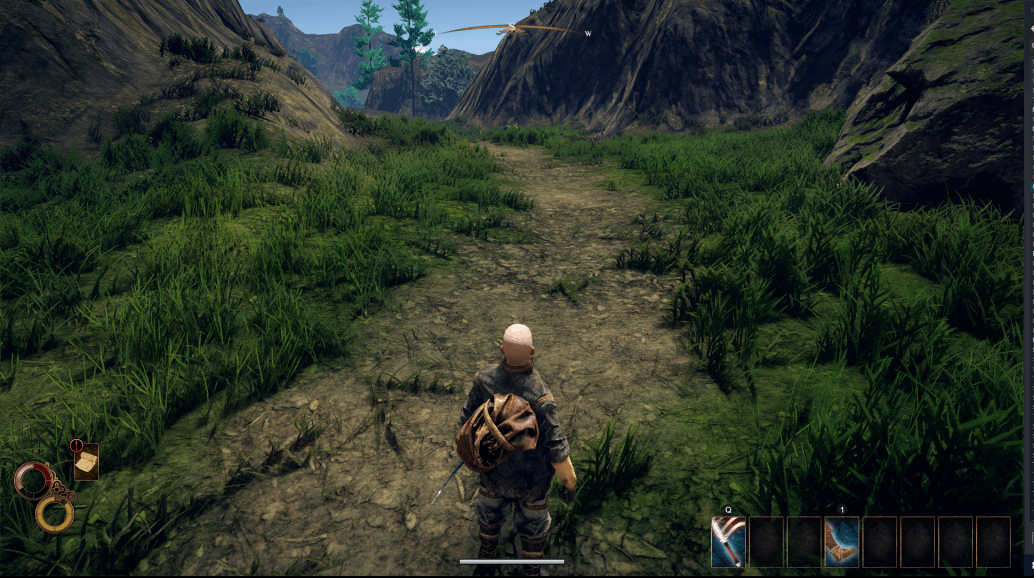 The bald man goes on an adventure for some new hair!

We immediately set off after smashing some birds and accepted a quest to go out to the local goblin cave and find a mushroom shaped like a shield (Fun fact it is a somewhat functional shield and made me giggle). After that, we were feeling cocky and felt that we had a good enough understanding of the game. Then my friend caught a cold. Time for the de-buff city. YOU CAN DIE FROM THIS COLD! A COLD! ONCE AGAIN A COLD CAN KILL YOU! Not only do you need to balance eating, sleeping, and repairing your equipment you also have to worry about temperatures, weather, AND THE COMMON COLD! But lucky for him, I was reading some recipes and by having some seaweed( Because I pick up everything and run out of bag space) and making it on a kettle I made some medicine and cured him. Yes, I am the hero he needed! 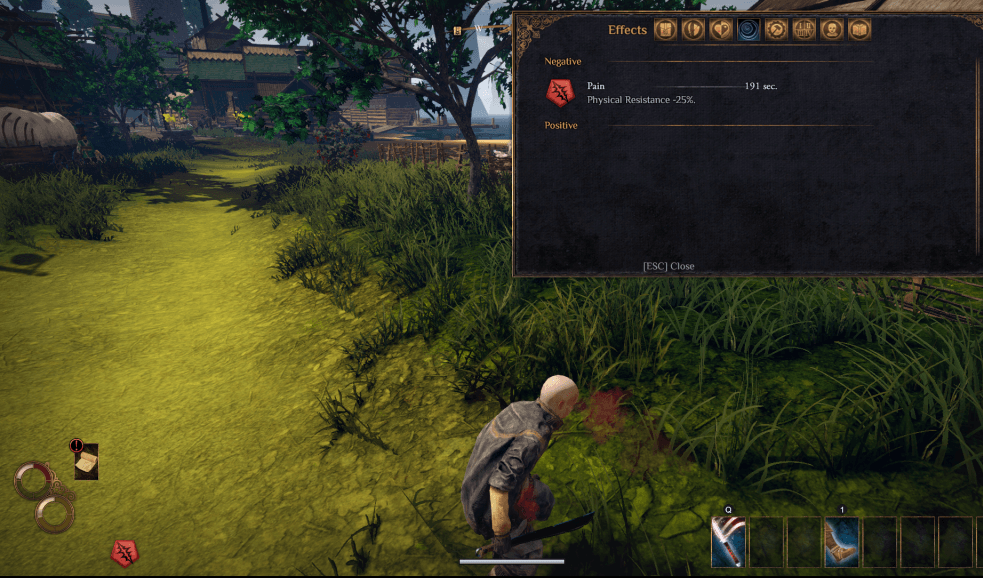 After overcoming micro-germs we decided we were ready for adventure. With our new loot on our backs and some cheer in our step, we headed towards a local bandit camp. Upon coming across a bridge leading up, I step on a trap and was immediately stricken with a big case of the bleeds. However, not to be deterred I used a quick bandage and pressed onwards. Trying to sneak up on the camp we discovered a cross between a troll/tree/skeleton. Thinking better about ourselves we immediately attacked. It froze us, smashed us, and sent us on our way to the great beyond. Now, this is where this game really is great. Depending on how you die, 10000 different things can happen. Fall off a cliff, you get warped back to town and suffer from a medical debuff that makes you have a movement penalty till you fix your broken ankle. Get killed by a big ass bird? Luckily a stranger passes by and brings you to a tree to rest up and leaves you some food. Or in this case, get beaten by a fairy tale creature and have another one take you to there cave and give you some sweet equipment to exact your revenge. Between all this Outward is very exciting in its gameplay.

Outwards graphics are a little behind. Don’t get me wrong it doesn’t distract from the overall experience but for me ,it felt dated and reminded me of Morrowind. Saying that, the creatures look great and the combat is alot of fun. But the terrain graphics leave something to be desired. Overall its nothing to be a game killer and honestly I am just being picky. Outwards focus isn’t about having top tier shadow and water graphics and is more about your adventure and continued survival through its world. The load screens styles are something I hadn’t seen in quite a while, where it is a still picture with a tip and an overall load bar, which once again was taken straight from Morrowind. Not a negative just felt almost dated again. 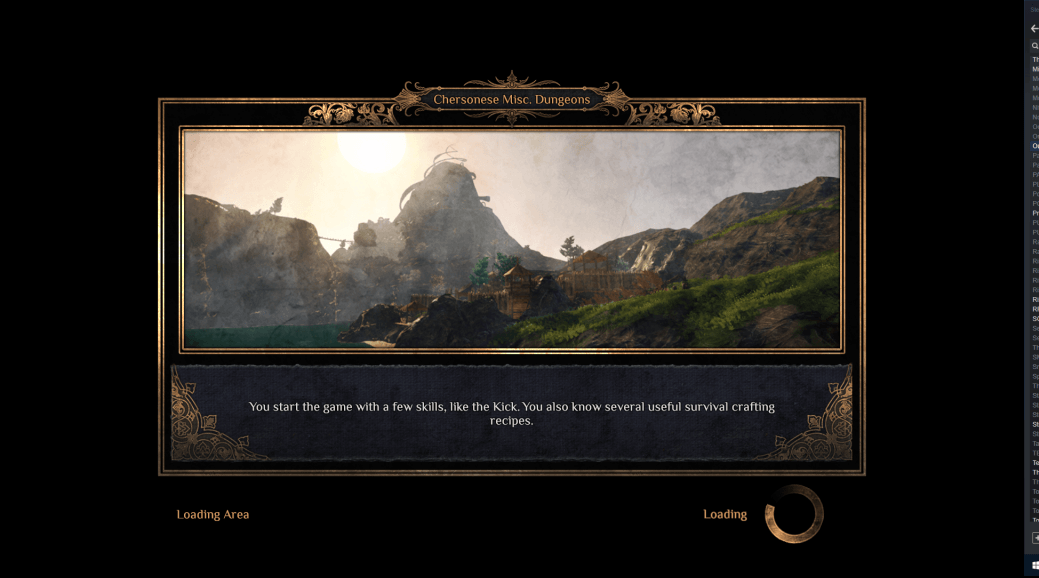 Outward has some great audio and really adds to the overall feel of the game. The way you walk through a cave, the local goblin shaman casting a spell at you, all of it is very clear and crisp. Traps activating have sound and enemy humans talking smack at you is great. You hear your struggle if you are stricken by something. The audio was great without being so overblown that you have to immediately open up the settings and turn down the music before you lose your eardrums. The music is good and helps set the mood for your adventure and multiple deaths!

With a deep combat system, steep learning curve, and all sorts of unexplored plots, stories, and no hard rails to follow, you should be able to play Outward for quite some time. Going back and learning from your previous games mistakes only add to the fun, and between solo and co-op adventures you will never run out of things to explore and try. I feel if Outward is supported by follow up expansions or DLC then it will be a great game to have in one’s library for a good length of time.

Great combat, goblins, angry birds, common cold, and who knows what else being thrown at you, Outward is a great game and I see myself coming back to it well after this review comes out and trying to perfect the combat roll! It is a great game and except for a few graphics issues (which once again I am being picky) it is a solid game. I am happy to give Outward the Thumb Culture Platinum Award and look forward to seeing it’s future! 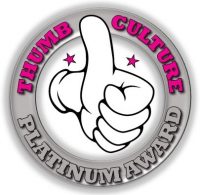 Introduction Ever wondered what it's like to be a McDonald's employee?  Despite the fact ...