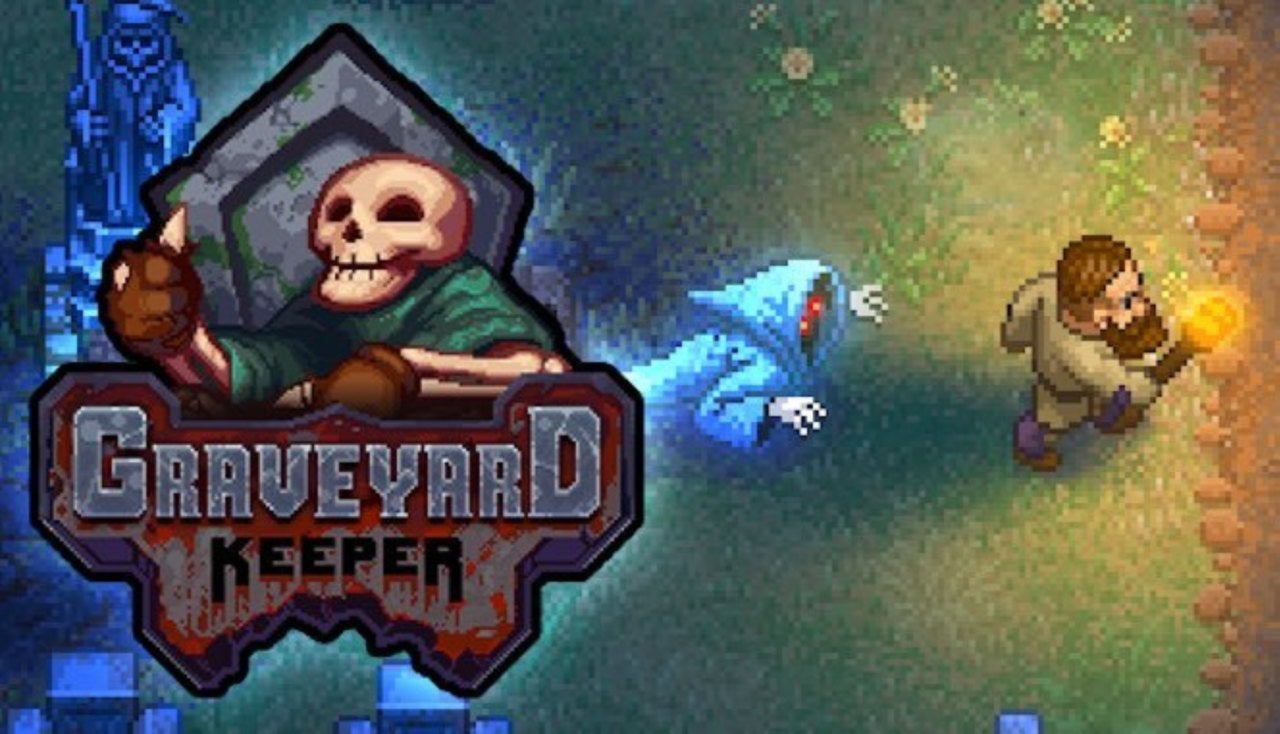 Netflix documentaries about murders, or when people die never truly go into what happens, do they just use your ashes? are you dumped off by a donkey on a roadside and chopped apart to have your flesh used as meat? Instead of reading the usual celebrity books I would whilst I was sat on the beach I ” switched ” things up and took my trusty switch and dived into one of the greatest time-consuming games I have discovered yet.

Graveyard Keeper is brought to us wonderful developers Lazy Bear games and publishers Tinybuild as they’ve already given us great games such as punch club, Pandemic Express and more including many titles coming onto the switch. 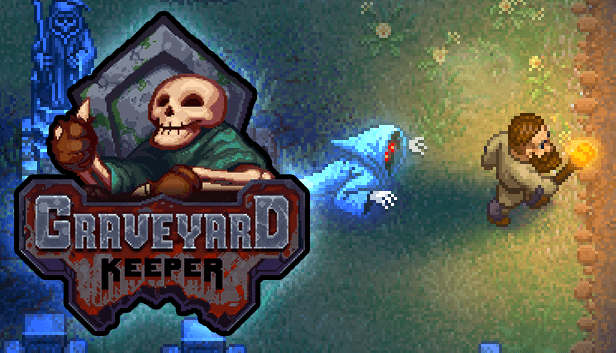 According to the cut scene, you’re starting off in some kind of freak accident. Something that not only takes you away from your family but also takes you back in time, medieval times to be precise. You’re given the role of the towns new wonderful graveyard keeper.

Of course, you’re given the role by nothing other than a talking skull – Great, bodies, talking skulls. Exactly what I want to see when I have no idea what I’m doing.

First thing first, how are you going to be a graveyard keeper when you haven’t got a graveyard that’s suitable to look after? Alas, your first task of the day is to clear it up, take away weeds, make some headstones shine so you can see your beautiful new medieval clothing in them.

Along the way, you meet some funky little characters, all with different personalities but sadly, if you keep clicking to talk you find they have very similar replies. I’d of liked a snarky reply for bothering them so much, think I’ll stick to annoying the rest of the Thumb Culture team.

Along with the creepy skull, you come across a bishop who carries around a mirror and stares at himself every second he gets along with a barman and his wife, farmers, woodcutters, a blacksmith, lighthouse keepers and many others you can trade with whatever you need.

Earning cash isn’t as easy as shovelling a crusty half decapitated (by yourself) corpse into a grave. unfortunately, you have to do things like growing your own crops, cut trees to make wood, mine for iron ore and even then you need to build things to help further your skills and create new styles of wood. Even then a lot of the people who will trade you need to reach a high “smile” with them by doing their tasks before they even think about trading.

There are special points you can earn to help unlock new blueprints, things to improve faith or things to create. The green points are gained when you’re doing things such as digging sand, extracting mines, gardening or woodworking. Red points are gained whilst you are building things or collecting items such as stones, weaponry or fixing the graveyard. The most difficult points I came across and admittedly needed to search forums to work out where exactly I can farm these points were the blue ones.

You’re given these whilst engaging in church or faith activities and making leaflets. You can also find the astrologer and buy a point book from him when you’ve completed a few tasks of his.

Along the journey from clearing paths in the streets, the cella and church, you stumble across a dungeon with numerous floors to clear. If you don’t clear the floor you can’t progress but you can die as many times as you wish. Just make sure you take plenty of food for energy.

There are around  12 different types of enemies you’ll come across in the dungeon who gets progressively harder as the floors go on and you can craft your own armour or go trade with the blacksmith to increase your luck against them.

The graphics were as expected for me as I have played tiny builds games before. They like to keep it very much old school which I do enjoy.  There were a few bugs where I’d walk through stairs or bridges instead of going up against them or over them but besides that, I think they did pretty damn awesome considering the variety of enemies, trees and people.

I feel like the main menu music is exactly the same as the other tinybuild game I reviewed before (Crimson Keep). Although diving into the game, it’s very much a peaceful tune whilst wandering around as you step into the village the music gets a bit more upbeat. You can hear fires crackling and different types of mumbles from the villagers depending on who you choose to speak with!

the dungeon has a very “war” tune to it, making it slightly more dramatic although it’s exactly the same jingle played all the way through the other areas but they’re slightly changed to fit the scenery which makes the atmosphere feel good. From wooshing your sword to axing items or trees and your pitter-pattering feet you can hear a lot going on in this mysterious world.

The only issue I would critique is that there isn’t really an auditory warning when an enemy is around. Granted in the dungeon you’re expecting enemies, but if you venture out at night you’re greeted with enemies also.

Given the time I would spend hours, days, months even possibly years trying to perfect my graveyard. Hey, I might even design a grave and show the children for when I’m on my death bed “let me have this, it’s pink, it sparkles, contact tinybuild asap” meaning I’ve probably got unlimited time to play.

I’m unsure about how long the fun will last when I’ve finally understood every single aspect of the game and remember how to play without asking google where I go to make a certain bit of wood but I’ll get there and I’m sure many other players will too.

Money spent on the game vs time playing it does go in favour of the time so very good longevity in my eyes.

I personally absolutely love the game, I’m still playing it and this review has taken a whole lot longer than it initially should have done but I just wanted to perfect it.

I know when I stop writing this I’ll be heading off back to my graveyard to clean some things up with it and further venture into the dungeons. Yes, there were a few bugs, but nothing that made it unplayable or frustrated me. An amazing little game with so much to offer so I will be giving this the Thumb Culture Platinum Award!