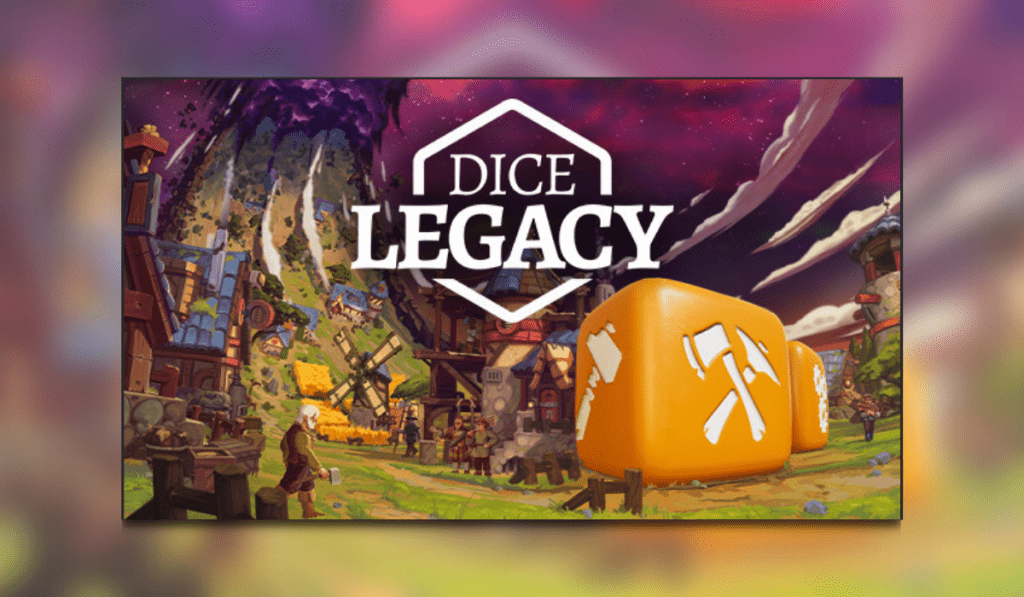 Dice Legacy takes tabletop games in digital form to a whole new level. It uses dice-based mechanics to gather resources, defend your settlement, and expand into the unknown while also being a challenging survival city builder. It is developed by DESTINYbit (Empires Apart) and published by Ravenscourt (Redeemer, Road 96, Kona). Dice Legacy was released on September 9th, 2021 on PC via Steam, GOG, and Epic as well on Nintendo Switch.

Dice Legacy is a Challenge in Strategy and Luck

One of the biggest problems I find with tabletop games is that reading through the instructions for most of them seems to take forever. Even after reading them, I usually still have no idea what I’m doing and learn best by playing. Dice Legacy does just that; gives you the tips and info you need for gameplay via tutorial pages as the need arises. Playing through trial and error is the best way to understand the game. How do you prefer to learn your games? Do you prefer a “tutorial level” or reading everything in advance, or just being thrown into the game to learn as you go? Let me know in the comments below.

Dice Legacy places you as the leader of a new settlement upon a mysterious ringworld. Using your dice on hand, you begin to gather resources, explore, and expand your realm forward. In the meantime, an unknown hostile force begins laying siege upon your assets and you must also play defensively. In the first scenario (and likely the others), you also have to contend with the changing season to stay alive. There are a number of other mechanics as well that can be overwhelming at first, but begin to make more sense the longer you play. Balancing them all though is key to success.

The dice themselves in Dice Legacy are at the forefront of the gameplay rather than behind the scenes. Each die has a set of different faces per class. The face value indicates what type of action that die takes. These include harvesting resources, explore, defend, etc. Each die also has a set level of durability. This value determines how many times it can be rolled before needing to be restored. Keeping the durability up on your dice is important, otherwise, they will perish and no longer be useable. There are also ways to modify your dice, such as empowering them or converting them to a different class. You may also combine two different dice and classes into a new die altogether.

Dice Legacy also features several in-depth mechanics that I have only been able to scratch the surface on thus far. Gathering resources, managing your settlement buildings, and defending your lands are at the forefront of the game. In the background though you will need to manage politics via the happiness of the different class groups and progress further in the game by advancing different technology trees. The happiness of your dice classes comes from how you respond to their policy proposals with each changing season as well as managing your dice pool. The technology trees are a whole other section of the game that will take some advancement on the board first before you can start pushing points to unlock new building types and abilities.

Honestly, there is so much depth to Dice Legacy that I couldn’t possibly include it all in this short review article. Like a tabletop game, you’ll just have to play it for yourself to better understand it. But I feel I should also mention that there are even roguelite elements to the game, akin to my previous review of Rogue Spirit. Playing the game unlocks different rulers to start with (initially you only have one) that each come with their own perks and starting set of dice. Not to mention I haven’t even gotten to the point of getting any Ascended Dice yet that you appear to be able to carry from game to game. Dice Legacy also provides the ability to speed up or pause gameplay and five different difficulty levels.

I am playing Dice Legacy on PC with a native resolution of 1920 x 1080. Even with settings mostly at Ultra, the game runs very smoothly. Activity animations throughout the game are fluid and do not feel excessive or out of place. The game also looks at feels both like a standard tabletop game in digital form as well as a strategic city builder.

The game audio is very well-placed too. Dice Legacy provides a beautifully relaxing and chill soundtrack. It makes me feel as if I’m playing the game at a renaissance fair or similar folksy setting. Thankfully, despite being a dice-based game the dice rolling sound isn’t overbearing or noticeable enough that you are immediately looking to turn it down. It is subtle – just enough to let you know you are taking an action.  There are also different audio cues for different events or actions taking place on the map that you might miss while trying to look over everything.

As stated above, Dice Legacy has multiple scenarios, different ways to start your game, as well as five different difficulty settings. There is not a set path to take, just the one you make along the way. This amounts to countless hours of possible play. Each time you sit down to play can play out completely different than the last. This is why I consider it more of a digital tabletop game. Anyone who enjoys a challenging city builder should definitely check out Dice Legacy.

Not going to lie, this is one of my favourite games I’ve played in a long while. The concept of Dice Legacy is presented in a clean, crisp, and beautiful fashion. It combines strategy, survival, city building, roguelite elements, and the depth of politics and knowledge trees without being overly complex. At the same time, it is challenging enough to have you starting a new game not because you have to, but because you want to try something different. Honestly, I’m likely going to pick this up on the Switch to be able to take it with me wherever I go. The polish, gameplay, and style make Dice Legacy deserving of Thumb Culture’s Platinum Award.