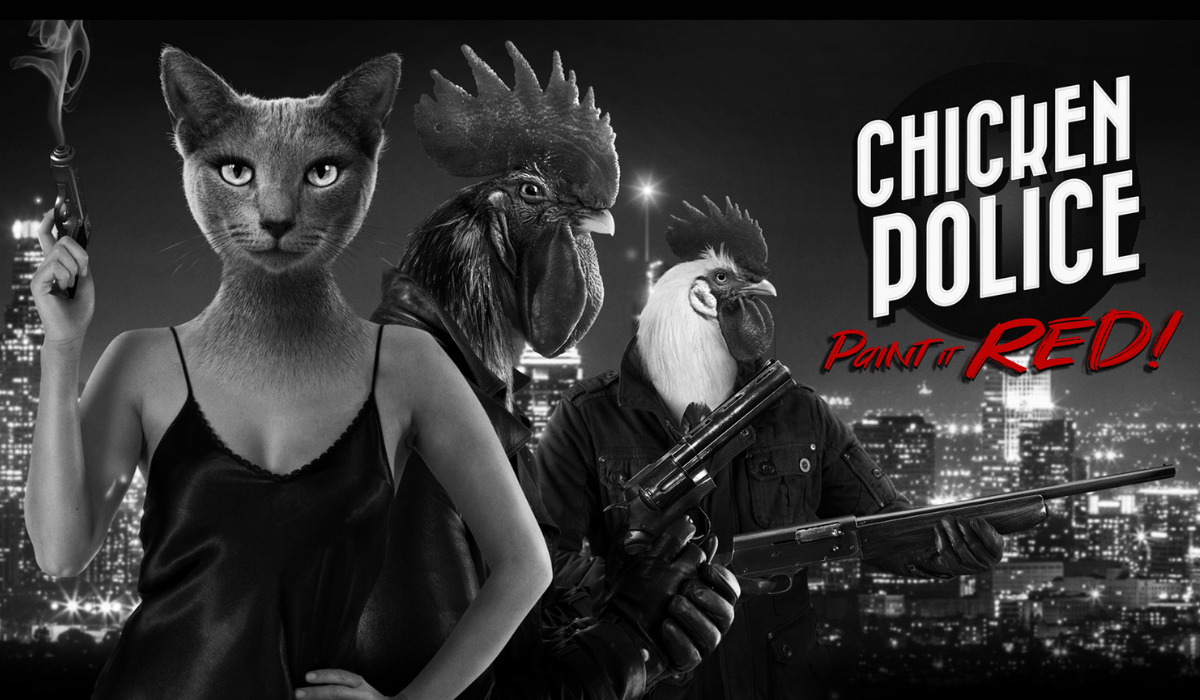 Back in November 2020, the gaming community was preoccupied with the release of both next-gen consoles and the release of various AAA titles. The consequences of this being that an absolute gem of an indie title didn’t register on many people’s radar. Chicken Police: Paint it RED! is the first game from new devs The Wild Gentlemen and published by HandyGames. The Wild Gentlemen team is made up from a talented group of developers who have worked on such classics as the Witcher 3, Call of Duty WWII and the Crysis series.

Chicken Police: Paint it RED! is described by the Budapest based team as an “Orwellesque Buddycop Noir Adventure”. LA Noire on LSD would be a better description (incidentally if Noire is your thing check out our LA Noire review here ).

Chicken Police: Paint it RED! sees you play as grizzled cock(erel) cop Sonny Featherland. Six months away from retirement and with a past Sonny is seemingly not far from being washed up and done with life. Cynical, bitter, jaded and basically your archetypal classic film noir anti-hero. So far so cliched. The twist here, of course, is that our hero and all those he encounters in the are half animal half-human. It shouldn’t work but somehow it does.

Chicken Police: Paint it RED! is set in the fictional city of Clawville.  Sonny is holed up in an abandoned hotel which serves as his office. One night he is interrupted from his drunken musings by a young Impala who has been sent by her mistress to seek his help. The mistress is Natasha Catzenko the owner of the Czar Club and the current squeeze of the local mafia boss. Insisting that only Sonny is the only one who can help her our hero has no choice but to investigate who has been threatening Natasha. He decides to contact his old partner Marty MacChicken the other half of the legendary chicken police and our adventure begins.

The game is essentially a cross between a point and click adventure and a visual novel. To progress in the game you need to question those you meet to find clues and leads to enable you to pursue the next line of enquiry.

Different characters require different questioning techniques with some responding to pressure and others requiring a more nuanced approach. Getting the balance right and picking up on clues in the conversations are the key to success. You are given a score out of 5 after each encounter so you can see how you are doing.  Top marks are scored by being mindful of who you are talking to and consequently adopting the right approach.

As well as questioning and talking to characters you can also examine objects at each location. Further clues can be found this way along with hints as to how to approach your conversations with those present.

To keep things interesting there are a few mini-games thrown into the mix although it is the detailed and compelling storyline that will keep you hooked. There are multiple references to the film noir genre and all characters have interesting backstories making it a fully fleshed (or indeed feathered) out world. The clues you gather and details of the various characters encountered are automatically recorded in a diary-like codex. This quickly fills up which can make it cumbersome to navigate however it really helps build on the game world the devs have created. The pace of conversation may be too slow for some and there is not really an option to skip forward. If you do this you will miss sections of the conversation which could be vital.

There are more than 25 places to visit and each change as the story progresses. You will find yourself crisscrossing the easily navigable map in your pursuit of the truth. With over 30 unique characters to talk to you will have your work cut out for you. Some of the characters will need some top-class questioning to make them reveal what they know and many are not what they first seem!

The unusual setting and characters in Chicken Police: Paint It RED! certainly give the graphics an arresting quality. The photorealistic animal heads grafted on to human bodies shouldn’t work but do! The black and white palette gives the game a dark moody noiresque atmosphere. At times it is easy to forget you are playing a game rather than watching a movie!

Games of this type need to have strong voice acting in order to be both playable and enjoyable. Fortunately Chicken Police: Paint It Red! does not fail to deliver in this regard. Each character is beautifully acted with unique voices and personalities. During my playthrough, I did not encounter any repetitive dialogue. It clear that a lot of love and attention has gone into to making this game with hours and hours of recorded dialogue truly enhancing the experience. The game has a unique soundtrack which adds to the feel of the game and squarely nails the film noir genre.

The game will take you a good 8-10 hours to paly should you fully explore each location and converse with every character. In terms of replayability, you would do so to improve your score for each interrogation. There is no option to repeat the questioning of each character as you play through so the completionists amongst you may want to give it a second wrong. The world Chicken Police: Paint it RED! is certainly ripe for DLC, sequels and indeed prequels. I hope the devs will send Sonny and Marty out on further investigations.

Given the timing of its release, Chicken Police: Paint It RED! would have slipped under many people’s radars. This is a great shame as it is a unique and well-crafted game with a sense of humour and a compelling storyline. The visuals alone are worth a look and in my view, the concept is an absolute genius. If the characters had been human I don’t think the game would be as good. For fans of the film noir genre and games such as LA Noire, Grim Fandango and Discworld Noir it is an absolute must. For those not familiar with the genre it will feel a bit slow at times and they may simply not get it. It is for that reason that I have given the award I have as not everyone will appreciate the game and what the devs are trying to do. 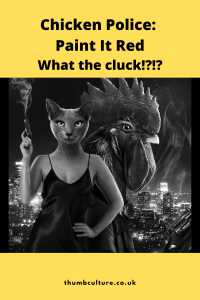