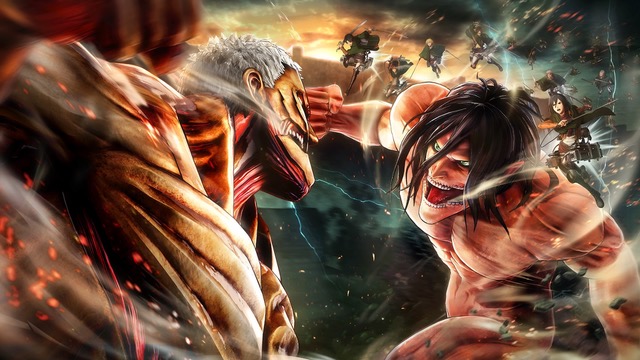 There is a point when you start playing a new game when everything falls into place and you accept  whatever powers, abilities or back story your character has as your new reality. With Attack on Titan 2 that moment came when I found myself tethered to a 50 foot tall naked giant woman, angrily swinging blades that wouldn’t look out of place in a piece of industrial machinery.

Full disclosure here, I haven’t played the original game, or seen the Anime or read the Manga. I know what these things are and can appreciate them for their style and artwork, but I honestly didn’t know what this was all about until I started playing Attack on Titan 2. The game does a very good job of bringing you up to speed on what has happened. Attack on Titan 2 is made by Koei Tecmo and is released on March 20th across PS4, Switch, Xbox and PC-Steam. The Attack on Titan series started as a series of Manga books in 2009 and has spawned into Anime, novels, a live-action movie and video games. The anime and Manga series have both won awards so to say that this game has lore, heritage and a fan base is a huge understatement.

The game is set in a world where mankind has been forced to live within gigantic walls to protect them from man-eating giants (aka Titans). You are charged with protecting mankind and through the game you progress form being a cadet, to a soldier. It is a team based hack and slash title using tactical gameplay to target vulnerabilities or weaknesses of the Titans to bring them down and then kill them off. As you liberate limbs  and sever spines you bring these Titan’s down and gather materials which you can later use to modify, enhance or build weapons. As well as main storylines, you can pick up assistance challenges and side-missions, each involves helping others to tackle and defeat Titans. This pattern of travel and attack can get repetitive but the teamwork element adds a different dynamic and adds variety. A quick press of the button and you can send other team members in to join in the butchery and stand back which you watch arms and legs get removed from your enemy.

Sneak attacks and range attacks which helps to vary the gameplay and flares to disorientate your enemies so you can attack, or escape. And in true Anime style, injuries and cuts are met with arcing fountains of blood which coat you and the environment. The play area is huge and you are free to traverse it in any direction you choose using the excellent Omni-Directional Mobility (ODM) device.

The ODM a rig which shoots out two high tensile elastic ropes which find their own points of contact and then reel in to fire you in that general direction. This device is also used to tackles Titans as your ODM harpoons the targeted area, then pulls you in at speed so you can time your slash attack to perfection. Your weapons can be modified and new items researched and built as you recover different materials from the corpses of your fallen enemies.

Character customisation is varied and it is easy to get a great looking character which could appear in any Manga comic book. Clothing, colours, face, hair and other accessories can all be added and changed to personalise your character. You build relationships with others and unlock perks, like leadership or agility, as you do so. In between missions you are free to roam the town where you can visit weapon stores, mess halls and your own residence. The control system changes as you have removed your ODM and weapons so there is no speed-rappelling in the town. You visit people and places, level up friendships and perks, and you can modify weapons and your ODM.

A single play area could be the size of a city, or forest and it is in this semi-open world, fast paced play system that Attack on Titan 2 really shines. The visuals throughout the game are excellent and even on standard PS4 the graphics are sharp and clear. The colour tone and animation style lends itself way to the Anime style of the game. The cut-scenes and narrative are so well done that they are seamless with the game, and the attack scene are done at such a fast pace, that you are completely drawn into it. The landscape and textures remain stable as you shift from first person story, to blitz attacks on titans. The frame rate does not slow down and the camera does a great job of tracking you while you swing and swoop around your target. The Titans themselves are less well drawn, but intentionally so. The basic Titan is a lumbering giant with no identifiable intelligence and they act and present that way on the screen. Their heads are too large and their bodies poorly proportioned, but by the time you reach an abnormal, or large Titan things pick up and these things look and act wicked!

The audio does a great job of playing second fiddle to the imagery, keeping pace as the tone of the game shifts and changes gear between attacks. Anime has a large pool of reference and Attack on Titan 2’s sound is well controlled so that you always know what is going on without it spoiling the main event or giving away any surprises. Cranked up, the sound of Titans swiping for you or stomping the ground ties in well with DS4 controllers vibrations to give a real visceral experience. The audio is perfectly complemented to the gameplay and visuals.

The game has a 15-20 hour campaign including the side-missions, and those hours can start to feel a bit monotonous. The game develops at a good pace and has a great learning curve that smoothly increases the difficulty by building it into the story. As a cadet you learn the basics and how to target fake Titans, and then a cool cutscene later, time has moved on five years and you are ready for the real deal. You feel prepared for what is coming next but equally challenged. Progress through the game unlocks new weapons and characters which you can then use in online play. You can choose for co-op play, completing bespoke online missions, or jump into a game that someone else is struggling with and help out. The connection to other hosts was fast and there was very little hanging around in lobbies. You can communicate with each other using gestures and co-ordinate attacks to build attacks chains.

As a whole package Attack on Titan 2 is fast-paced and very well executed. If Anime is your thing or you have played similar titles this game is a must buy. The game completely immerses you in its stylised world of huge blades and giant enemies, fatefully destined to clash in Tarantino style bloodshed. It has a huge environment and number of game modes to explore and a feedback loop that keeps you coming back for more.

It is not for everyone and if you don’t like it straight away it could start to feel like groundhog day. Its style and storyline are so heavily influenced by its Manga roots that it lacks mass-market appeal but will be essential for fans.

But for those willing to step away from the norm, or for those who always thought Manga was cool but didn’t know where to start, this game is for you. It’s gameplay, upgrade system and perks will give you a new and addictive experience which, much like a Titan, will grip you and refuse to let go. Hint: When a Titan grips you and won’t let go, take your blade, slice their fingers off, swing away and then take out their legs. Attack on Titan 2 gets a Giant Thumb Culture Gold Award.