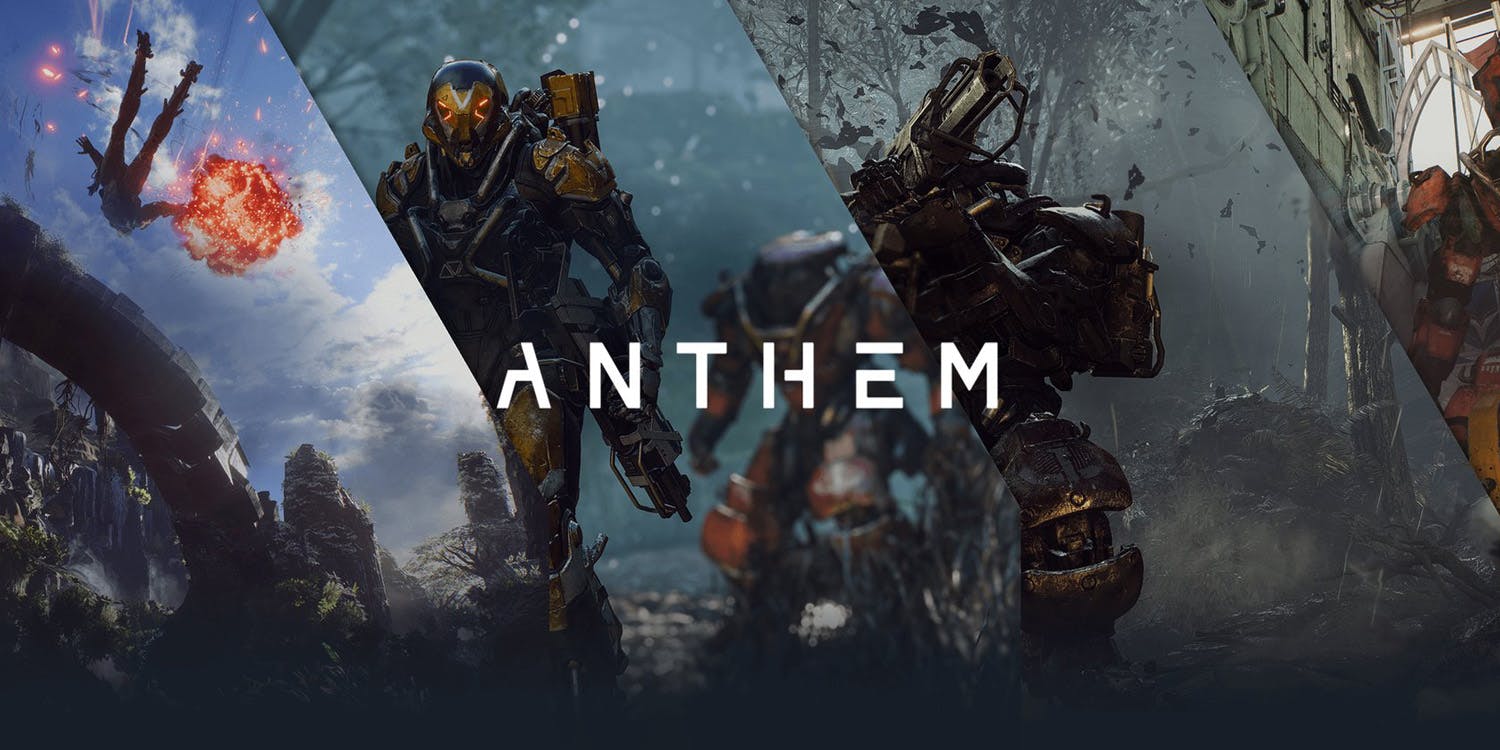 Playing through the Origin Premiere access early week of Anthem I have just one thing to say to the developers at Bioware: Bravo. Anthem is a game I’ve been looking forward to since it was initially announced at E3 2017, and my excitement has been met with an experience that is incredibly fun to play. I know a lot of people were hesitant to trust in a game being published by EA due to their sordid history with loot boxes, but there is no presence of loot boxes anywhere in the game that I’ve been able to find. Sure there are microtransactions, but none of them offers a paid advantage to players, only cosmetic items for customising the look of your Javelin.

Development for Anthem started way back in 2012 and had been kept relatively secretive until it was teased at E3 2014 by Bioware Edmonton. Anthem will be released on PC, Xbox One and PlayStation 4. For the purpose of this review, I will be playing the Origin Premiere Access Week early release. That being said, it’s time to suit up and drop into my review of Anthem.

Let me start by asking you a question. Do you think Iron Man is a pretty cool guy? Yeah? Well, if you have ever wondered what it is like to fly around like Iron Man blasting enemies with your friends, this is the game for you. Anthem is a third person open world looter shooter. In Anthem You play as a freelancer, taking on contracts for whatever work you can get. As a freelancer, you set out on contracts piloting exosuits called Javelin. There are four options of Javelin to choose from before you set out. You outfit your Javelin with guns and more massive ordinance like mortars or grenades to facilitate killing the monsters and baddies you find in the world.

Each Javelin has a selection of equipment that it can use. For instance, the heavy tank Javelin called Colossus can use the larger guns like autocannons, and grenade launchers whereas the light and agile Interceptor Javelin uses more in your face melee skills. As far as I’ve gotten to play, I’ve had the opportunity to play as two of the four choices of Javelin, The Colossus and the Interceptor. Both are fun, but I’ve had a more fun time using the Colossus. It may be slower and not jump as high, but it sure can deal out the damage and take a beating.

Throughout Anthem, there are a few factions you get to accept contracts from. Each of these factions has reputation points for you to earn to increase your standing with them. The faction contract boards can be found in the games hub level. Each week as you increase standing with the faction you are rewarded with a pile of coins. Coins can be used to purchase the cosmetics in the in-game store. You can also buy shards with real money to unlock these cosmetics faster if you want to, but I don’t see any reason to. You get plenty of coins from completing missions and challenges.

The gameplay of Anthem looks and feels fantastic to me. Everything about flying through the air is incredible. From taking off using jump jets on your suit to dive-bombing enemies with a long fall slam to the ground, it feels terrific to be in the air. From flight, you can also switch to hovering and take out your sniper rifle and start shooting from a high vantage if getting up into the enemies faces isn’t your play style.

Picking the right Javelin to suit your playstyle is very important. A friend I was playing with was hating the game with the Javelin he had initially chosen. When he got far enough to unlock a second exosuit, he started having a lot more fun playing. I picked the Interceptor to start, and it was pretty fun to zip around with my high speeds and triple jump. But when I got to the required level to unlock another suit, I chose the Colossus, and I have been having a much more fun time slamming enemies around with my big steel shield. The most satisfying feeling is sprinting at an enemy and smashing them with my shield so they ragdoll and fall over.

One of the things I want them to fix is the map system. Being unable to make waypoints on the map when I’m moving around the world is pretty frustrating. The movement speed in the hub town also needs tweaking; it’s excruciatingly slow walking around. The “Day One” patch should fix or improve on a lot of the game’s little issues.

The graphics in Anthem are pretty spectacular. The textures, lighting and particle effects are very well done. I found myself picking up my jaw because an explosion looks particularly sparkly and pretty. The environmental details look amazing.

I’ve heard a lot of my friends talking about graphical bugs that they’ve encountered, but I haven’t seen many. Maybe I’m just lucky. Initially, I had Anthem installed on my older HDD, and I saw graphical issues because of it. Sometimes textures wouldn’t load fast enough in town, and I would fall through the floor of the Javelin launch bay. After once or twice of this happening, I decided to try reinstalling it on my SSD, and the graphical issues disappeared. I’ve heard about disappearing NPCs and strange happenings in the open-world portion, but nothing I’ve encountered myself.

I’ve been playing Anthem at 1080p, holding a steady 59-60fps the entire time. I’m surprised it runs as smoothly as it does considering there are a lot of explosion effects happening. I feel like Bioware has done a fantastic job optimising the game to run well. However, in typical Bioware fashion, the facial animations on the NPCs are a bit wonky at times. For anyone who has played Mass Effect this isn’t surprising or new.

Let me start by saying that the sound design in Anthem, in my opinion, is well done. The sound of the jump jets when you take off from sprinting is pretty awesome. When you’re flying, you can hear the rush of air passing by. Dropping out of flight and landing on the ground results in a massive slam. The hydraulics of the Javelins moving around is spot on. Gun sounds are good, and you can almost feel explosions. It all makes you feel like you’re in the exosuit.

There are sometimes issues with dialogue triggering during missions, but I’m hoping that will be patched promptly. Also, the music in the game can be pretty epic at times, but I’m usually unable to hear it because of gunshots and explosions drowning it out.

The longevity of a game like this is a tricky thing. It depends on how much post-release content Bioware plans to add. So far they have road-mapped a few upcoming content updates. I’ve heard that they are planning on putting content into the game fairly regularly. I can see some people blasting through the story missions, then grinding away strongholds, which are this game’s version of raids, for a while before ultimately giving up on it. However, if Bioware can keep a steady flow of new content coming then, players will undoubtedly be able to get hundreds of hours of gameplay out of it. For me, it’s precisely the type of game I can play for 200+ hours, just because I find the gameplay fun enough so that it doesn’t feel like a grind. The downside for some might be that the game contains no PVP. The first content drop is scheduled for March, but they’re very vague about what they’re adding. Only time will tell if this game will succeed where others have failed.

Anthem as a whole is a very ambitious undertaking from a company who hasn’t dabbled in the always online co-op shooter genre. I have high hopes it will be a successful game. I’m personally enjoying every minute I get to play it, but I have heard complaints about the endgame becoming a grind. I feel if you have a team of friends to play it with it’ll be a great time. Friends always make games more fun. For those who would probably be matchmaking with randoms, it might not be nearly as enjoyable.

Overall, I think Anthem is a great game and will continue to improve. I’m going to give Anthem the Gold award, because of the enjoyment I’ve gotten playing with friends. It’s not often a game comes along that leaves me thinking about the game while at work all day. So I for one, can’t wait to see where it will go.