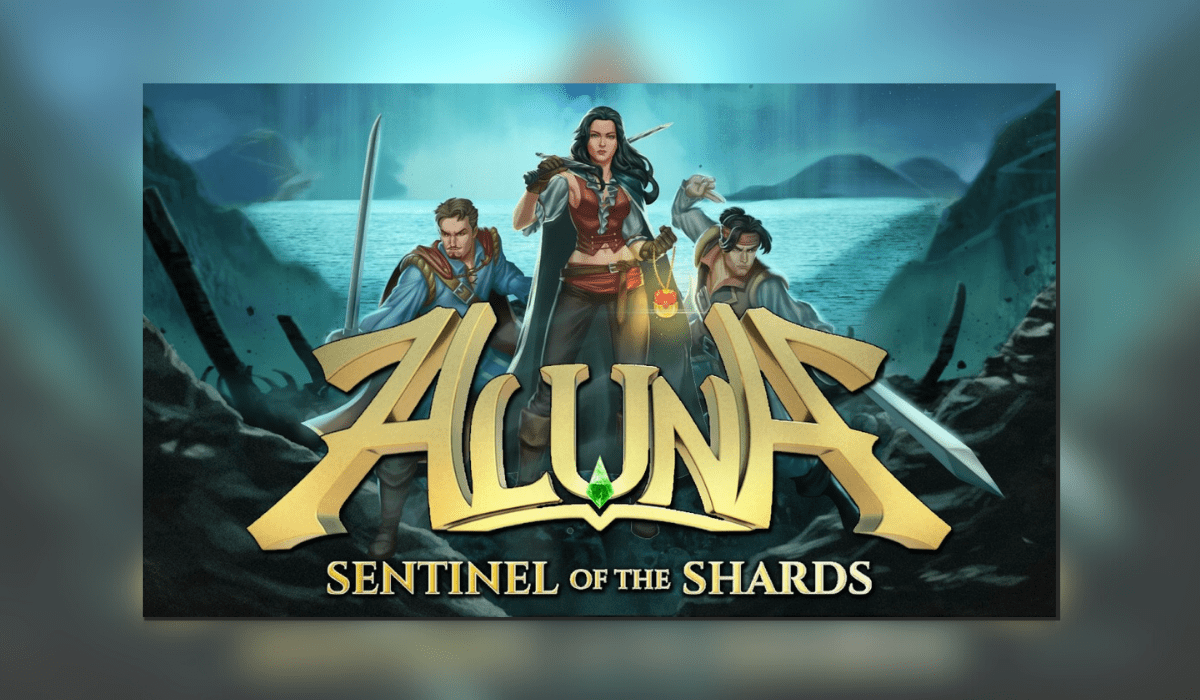 Aluna: Sentinel of the Shards is a role-playing action-adventure game developed by N-Fusion Interactive, Digiart Interactive LLC and published by Digiart Interactive LLC. It was released on Nintendo Switch, PlayStation 4, Xbox One, and PC on May 26th. There have been interviews and behind the scenes footage all over the developer’s channel. They’ve even announced a tie-in comic book. That is dedication to your game!

“I will do all I can to make sure that when I’m done, all will know my name”

I’ve been playing video games my whole life and I’ve never once played an action RPG. I’ve played the regular RPG’s like Final Fantasy X and Chrono Trigger, but never an overhead action RPG. It just never seemed like my type of thing. But I was looking forward to giving one a shot. Aluna: Sentinel of the Shards has had a surprising amount of build-up for an indie game.

I honestly didn’t know what to expect with this game. But I gave it a chance and here are my thoughts. If you’ve played Aluna: Sentinel of the Shards and want to share your opinion, or are a fan of action RPG’s in general, let us know in the comments. We always love to hear feedback. Check out my previous review here.

Before the opening cut scene starts, you get an option on what difficulty you want. You get the typical easy, medium, and hard difficulties but for some reason, there is a different option that says story mode. I’ve played both the story mode and the medium difficulty and nothing really changes. The only difference is that it’s slightly easier to kill villains in the story mode. It’s just a weird choice to have story mode separate from the other difficulties.

When the opening does start, it is very well done. It’s not too short, explains everything you need to know, and it’s done in the style of a comic book. Set in 16th century Spain, the plot of the game centres on Aluna, the daughter of the forgotten goddess of earth, Pachamama. When Aluna was a child, her mother gave her the most powerful crystal shards that fell onto the land. The shards contain her mother’s heart and Aluna goes on a journey to a new world with her shards. But along the way, villains try to take them away from her so they can rule the world.

The controls are also great. It doesn’t feel all over the place like other games. It’s pretty easy to figure out which button does what. The best design the developers added was the addition of a dodge button. It’s the right analog stick on Switch controllers and it is a fantastic feature. You’re going to be dodging a lot in this game so it makes sense why it’s there. One minor aspect I want to praise is the auto-save feature. I’m a really big fan of it and I hate it when other games don’t use it. 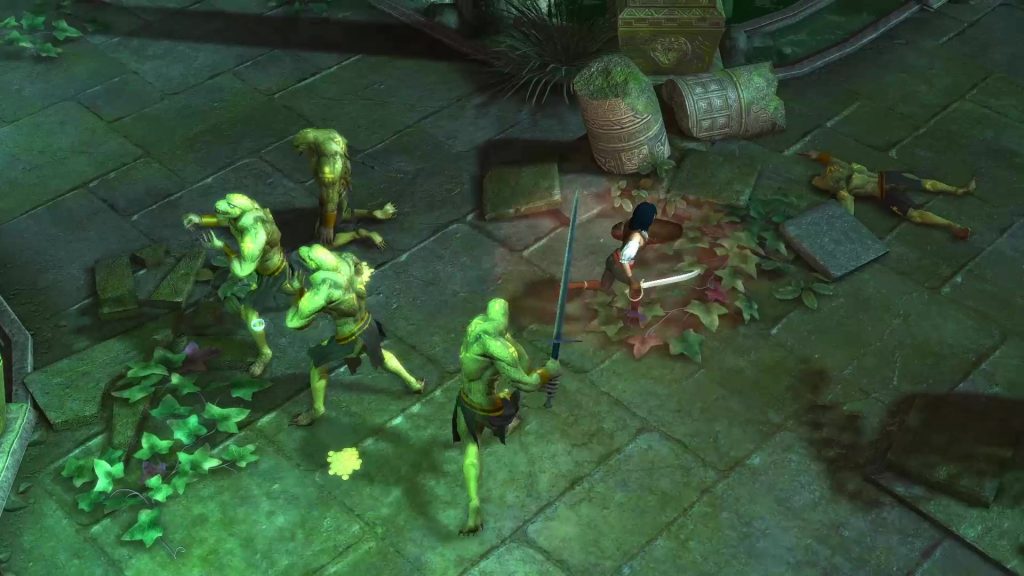 And here we see the over the top enemies.

The main topic I want to talk about here is gameplay. While the plot is decent and the controls great, the game itself is really boring. It basically boils down to going to an area, fighting an absurd amount of enemies, wandering into a small piece of storyline, rinse and repeat. I find it a lot similar to Bioshock: Infinite where the whole game was just going to an area to kill bad guys. Then go to another area that progresses the plot. And then do that all over again. Unlike Bioshock: Infinite, Aluna: Sentinel of the Shards isn’t that engaging. I found that the characters weren’t all that interesting. Their motivations make sense but I was never deeply invested in what was going on.

As I mentioned, a large part of the game is fighting enemies and let me tell you, the developers went way overboard with the number of enemies. Every time you fight someone, there is always way too many of them. Pretty soon, you have no choice but to run away from all of them until you reach your destination. It’s not fun at all. What makes it worse is that the first weapon you start off with is a torch. But the more chests you find and open. The more weapons you get. You do get a shield and it does help a little bit with protection, but when you’re fighting, it looks like it’s not doing anything. I’ve checked and there isn’t a button to press so you can hold it up and defend yourself.

A feature the game has is unlimited health potions. It fills up pretty quickly and with all the enemies you come across, it’s pretty obvious why they put the option of unlimited potions. But I really think they should have toned down the enemies. The enemies you mostly come across are people but in every area you’re in, it accompanies an animal that fits that environment. For the jungle, it’s piranha plants and monkeys. The beach, it’s crabs. The swamp, it’s alligators. You eventually come across a boss animal that’s basically the same design but bigger. I found that to be very lazy.

Right when the game starts off, you’ll notice that the graphics look vaguely similar to early role-playing games. RuneScape and Diablo are the ones that come to mind. But by today’s standards, the graphics aren’t that great. They’re ok but they’re not very good for Switch standards. It almost looks like one of those games that you play on your phone. After seeing the graphics for the opening scene, it feels like the graphics for the actual game fall flat.

As I mentioned before, the game features way too many enemies. But there is more to it than just that. There are points where there are so many on-screen that the game starts to lag. And this just doesn’t happen every once in a while, it happens every time there are an absurd amount of enemies on screen, which is often. When the game starts to lag because of the amount of NPC’S, you know you have a problem. I also found quite an amount of glitches. I noticed a lot of animals were passing through each other and some were running into walls. And I found some areas where you could walk into walls. You couldn’t go all the way through them but it was enough for the character to disappear.

An aspect Aluna: Sentinel of the Shards does very well is in the music department. It has this epic feel to it, giving the audience a sense of adventure and the quest they’re about to go on. It has good calming music for the slow scenes and upbeat scores for the fighting. However, the voice acting could need work. The voice actors switch from giving good performances to over-the-top acting, especially from the villains and their obnoxious evil laughs. There was one part where Aluna is on a boat and it goes over a waterfall. Aluna’s scream as the boat falls over doesn’t sound convincing at all. It even made me burst out laughing watching it. And I don’t know if it’s the actors’ fault or the sound departments but there are scenes where the voice-acting goes from quiet to really loud.

As a side note, a feature that gets annoying fast is the characters dialogue while fighting. Every time Aluna gets her health bar low enough, she says stuff like “I’ve been hit” or “This could be it”. After hearing that a few more times, you get the feeling of wanting to smack her.

The length seems to be pretty good, around 6-7 hours. I haven’t played it all the way through. However, I feel like I have played a good length to write this review. The game is a decent length but for me, especially with the gameplay I just talked about. If this would have been less than this length, it could have been a lot worse.

With all of the stuff I’ve mentioned above, I don’t want to hate on the development team. Many times I became frustrated with the fighting and laughed in places I shouldn’t have. I can say that the team at N-Fusion and Digiart Interactive clearly tried. They had a passion for this game and succeeded in finishing it. It personally isn’t my type of game but I can see other people enjoying themselves. I feel like the developers should have worked on the game a little bit more. Fixing bugs, improving the story, and lowering the number of enemies are the main problems that should have been fixed. Other than that, I didn’t hate it. It just isn’t my type of game. If you love games like RuneScape or any of the Diablo games, pick this up. You might have a great time playing it.

With that, I am giving Aluna: Sentinel of the Shards the Thumb Culture Bronze Award. 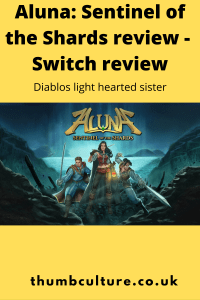 One thought on “Aluna: Sentinel of the Shards Review”