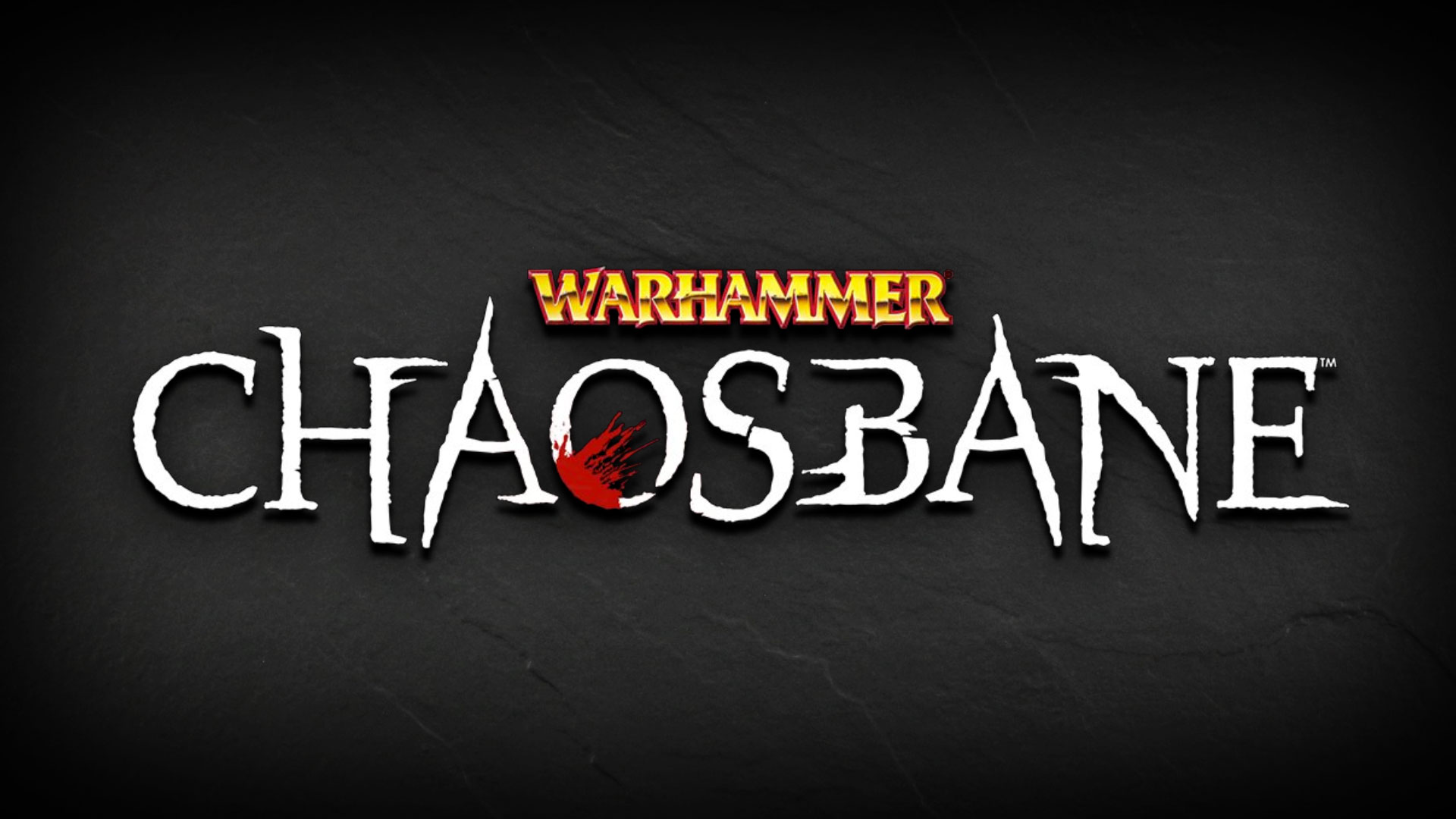 I’ve always been a fan of Diablo and have recently re-discovered my love for Diablo 3 since its release on the Nintendo Switch, Warhammer: Chaosbane caught my eye. Upon first looking at the game, developed by Eko Software,  you could be forgiven for comparing it to Diablo but upon playing it, you soon release that Warhammer: Chaosbane has simply been inspired by it and added the whole world of Warhammer by placing right into the heart of the game.

There are a few good Warhammer games out at present with the release of Battlefleet Gothic: Armada 2 recently and Last year Warhammer 40,000: Inquisitor – Martyr which also was an Action RPG but didn’t score that high.

The game is currently in Beta which runs from March the 7th until March the 13th and it’s officially released on the 4th of June.  It’s going to be released on PC, Xbox One and PlayStation 4 and I was lucky enough to receive a private beta invite which ran from the 28th of February until the 3rd of March.

I managed to play the game for a good few hours over the weekend, completing as much as I could, so that I can give a good insight to what to expect not only in the next beta but what the next release will bring.

The beta was limited in the sections you were allowed to play.  There was a cooperate Online section (though if you searched for anything, nothing appears which is expected) and the other option was to cooperate locally which was what I opted for along with Story Mode, as Boss Rush and Dungeon Mode were also disabled.

When selecting the character, even though it was showing 4, I could only pick the Imperial Solider and the High-Elf Mage.  However, the 2 other classes that look to be available upon launch is a Dwarf Slayer and the Wood Elf Scout.

Before killing those Choas, I had to pick my character, and as I like playing the Crusader class in Diablo 3, I decided on the Imperial Solider as he simply looked familiar. But what are we fighting for?  Well, Chaos once again is launching an attack but this time on …reality! Sending Hordes of Choas to the street of the Empires biggest cities; our heroes must axe, smash, crush and cast their spells to get rid of the Chaos once and for all.

Without a doubt, you will see the ability to unlock skills at different levels which is similar to Diablo. however, unlike Diablo which you can pick and choose your abilities, Eko Software has introduced the ability to earn skill points.  This, at first, was a little disappointing but after a few levels, I can see why.  Basically, It means that you don’t get too carried away with silly abilities and keeps you on the path of setting up the build for your character.  I made a mistake and assumed, without actually reading it, it was going to be the same as Diablo. That’s a tip for people jumping in – plan where you want to spend your points.  Don’t worry about them, as to get your points back, you simply go down the skill tree. I was playing a soldier and downgraded my “cutting edge” and re-assign the points to a passive skill.

The gameplay is really smooth and the story flows really well.  I know it was beta but I could feel the potential. However, I noticed something while I died in one of the dungeons.  A popup came up asking me if I wanted to be revived back at the same spot or, back at the start. However, if you choose to be revived at the time you died, it would cost you golds coins.  It’s not the end of the world and you earn enough coins as you go along, but I hope this isn’t going to be an opportunity to charge people for this. That would be a shame. Fingers crossed!

In the first act where I went to fight the chaos, the game went strange and kind of glitched.  I opened my inventory while on the bridge and could no longer select anything. A simple restart was fine and I guess it’s the joys of beta and to be fair, even on the title screen, it does warn that you could experience some crashes.

After playing through the first Act and getting to a nice level 16, I had come to an end with the beta.  It was a shame as I wanted more and I feel this game had a lot to give. Though by the end, my character did look pretty good!

Again, I’m comparing the graphics to Diablo which was released in 2012 but my word, they were stunning.  I put the graphics on Ultra (I have an Nvidia 1070 GTX) and the level of detail was amazing. When entering a dungeon, you could see the wet shine off the bricks of the sewers and the attention to detail was quite high.  For me, the nicest part of the game when you encounter the chaos on the bridge. When you were hitting them, they were flying off and leaving a right old mess on the stones.

I can only imagine what the rest of the game has in store when it’s fully released.

I’m lucky to own a Nice 7.1 headset and the sounds are amazing.  When in the sewers, the bridge or anywhere, it really feels that you are in that place.  With winds coming from you in different directions as you move, it helps with the immersion into the game.

This game has a mass of potential just from the campaign alone.  I feel it might be the next benchmark in Action RPG’s (or until the next Diablo comes out if any). When released, along with a story mode, you are going to get a boss rush mode which sounds interesting but not a huge amount of details have been revealed.  We can only assume something like Bounties in Diablo but when completing certain ones, you get bigger rewards including exotic armour pieces perhaps.

The other mode that has been described is the countless dungeons option which, could end up something similar to rifts in Diablo, where you have a task to complete and in doing so can gain rare loot and achievement.  In any case, both modes will give a life being the story mode which is going to have, in theory, many hours of replay value.

There have been some snippets of information (mainly around the Chaosbane Subreddit) that there are going to be some exotic armour sets that you will be able to loot, again very similar in Diablo, to get that Ultimate build.  This sounds like it could be a very good “grinder” for that particular bit of armour your seeking.

As the game is still in pre-order, you can currently choose from the following versions: 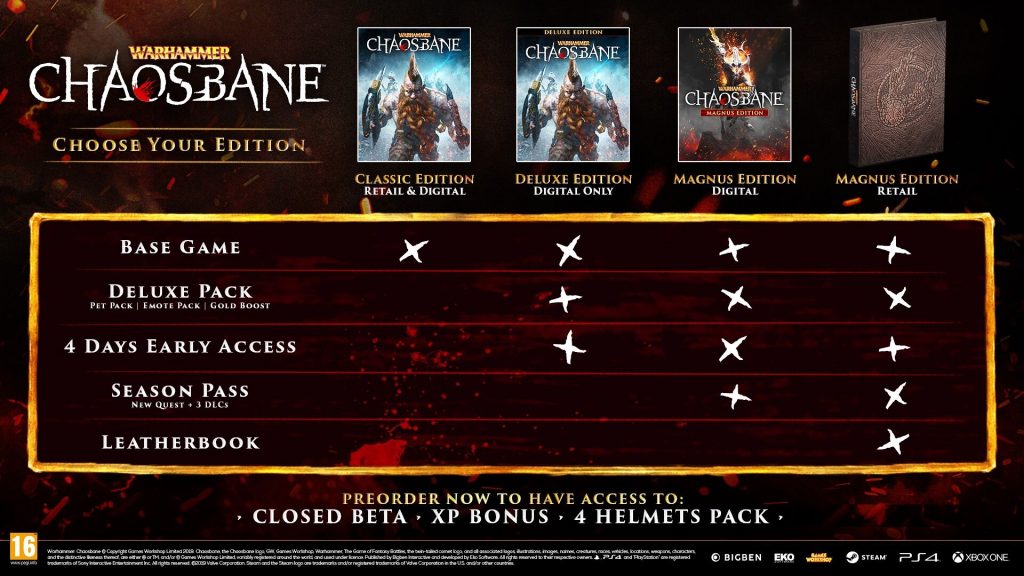 As you can see, there is mention of a season pass.  Done well, this could add a lot more replay value including possibly more dungeons and maybe even more stories.

The prices are already on stream which is starting from £39.99 and looks that the season pass could be priced at around £24.99 (but will have to wait and see): 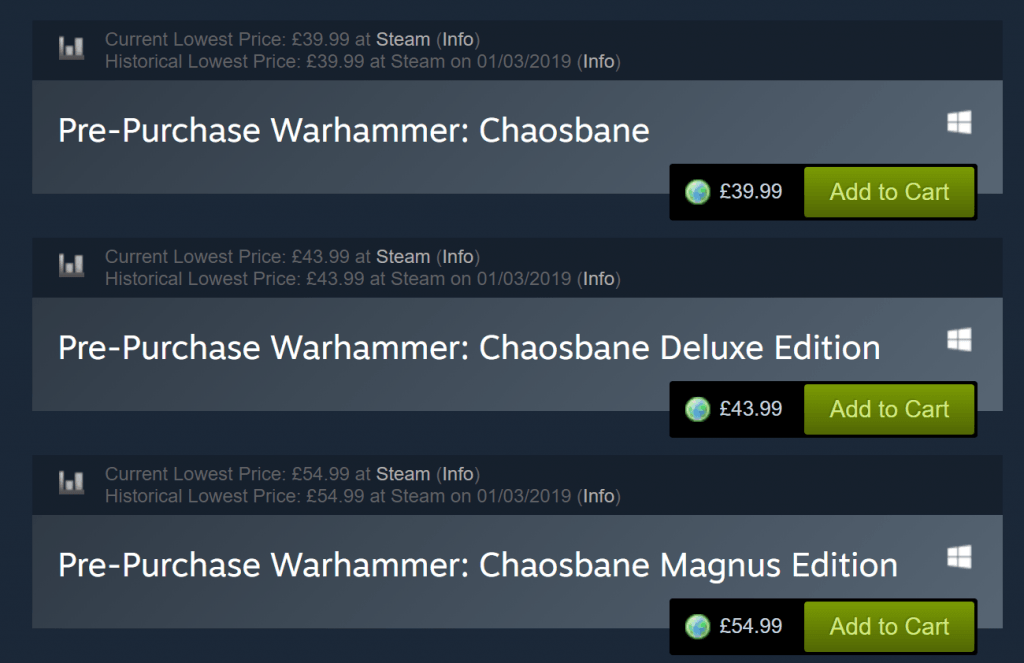 Personally, not only do I avoid pre-ordering but also more than £30 for ANY PC game is too much in my book. However, I did really love the beta.  So much so I am heavily considering pre-ordering at this price as this could be my main game that I sink many of hours into just like Diablo.

What I would like to see is Cross-Play with PCs and consoles playing as one.  This style of game will have very little advantages user Keyboard and Mouse of a Controller (being a PC guy I actually prefer a controller for this style of game as its easier) and would open this game wide open and the user can play with their friends regardless of platform.

Warhammer Chaosbane has a massive amount of potential just from the beta alone.  If they deliver what they promise at the game’s launch, they will be in a great position.  What will make or break them is how they keep it refreshed, how the season pass will work and to make sure its a “good grinder” rather than a “bad grinder” and that would help with the influence from Diablo that is seen through the game.

Overall, I want this game as I can see massive potential in it.

Disclaimer: A code was provided to complete this preview

One thought on “Warhammer: Chaosbane Beta PC – A refreshing Action-RPG”