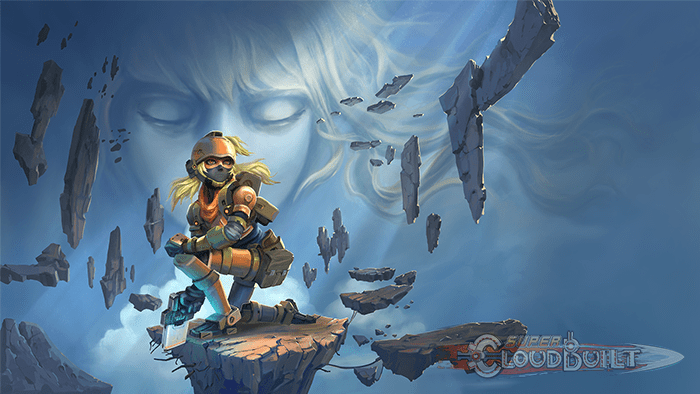 Originally launched on the PC in 2014 as Cloudbuilt, Coilworks and Double Eleven totally remastered the title, re-evaluating the game from the base mechanics up. The result stands as a definitive edition, making the experience more intuitive to new players, while adding increased depth and variation, allowing you to choose between taking your time to explore and focusing on blistering speeds and high scores.

Super Cloudbuilt puts you in the role of Demi, a young soldier who wakes up in the empty shell of a ruined building, in the centre of a strange new world, disconnected from her old life and physical body. Confused and isolated, Demi pushes herself physically and mentally to overcome the obstacles of her new reality. Complete incredible feats of free-running and sharp shooting, using Demi’s rocket-powered exo-suit to leap and run through expansive worlds floating above a vast abyss. With each new challenge she overcomes Demi learns more, pushing her to piece together the future now laid out before her. Demi persists, traversing levels, allowing her to experience multiple endings: will Demi learn to understand and accept her new world, or question her reality and learn to defy it?

When I first saw that I was going to review this game I got “super cloudbuilt” excited having watched some trailers on YouTube. I thankfully wasn’t disappointed. For those of you that think that Crash Bandicoot N. Sane Triliogy is a challenging platformer…that’s cute, as this game will leave you literally climbing the walls! Super Cloudbuilt is a very daring game in itself since not too many titles these days place their attention on parkour elements, while implementing a third person shooting type of experience. Double Eleven delivers all of that in a very stylistic way, incorporating cell shading to give off a very futuristic appeal.

Your character, Demi, moves at a pretty rapid pace, and as mentioned uses parkour to get around, whether it’s running up walls or grabbing onto ledges. So, combining speed with agility is not an easy task, as it took me a few tries to get through certain levels in the beginning before I eventually figured out how that works. After an hour or so of play, Super Cloudbuilt will have your head spinning as you jump from wall to wall while shooting hostile robots and avoiding damaging forcefields, but you’ll be better at it than you were half an hour ago, and in another hour you’ll be even better still. Equipped with a light rocket-powered exosuit and a handy firearm, which you don’t get until a little later on in the game, every one of Super Cloudbuilt‘s levels will have you running, jumping and gunning your way to success.

Each level is almost like a maze, a puzzle that you need to take a step back from to see the bigger picture. To get to the answer – the final destination – there are multiple routes, and which one you take will be largely down to your experience with the game and your skill. Despite the complexity of the leaping and bounding you need to perform, everything is surprisingly intuitive and easy to pick up. I was initially worried about being frustrated by all the mechanics I was expected to master, but I instead ended up feeling a type of Fonzie-esque shades-wearing cool after rocket-surfing over ramps.

I adored the wonderful colour and artistic flare in this game. Visually, Super Cloudbuilt is a treat. On a technical level it’s all very basic, with lots of plainly coloured surfaces and low quality textures. A fantastic cartoon sketch effect is then applied, which really brings the visuals to life, making everything look way more detailed than it is. Basically Super Cloudbuilt looks great, with a cel-shaded style that brings a comic-book like atmosphere. Those looking for a different visual experience can also choose different render modes such as Painted and Sketchbook which look as good as the standard one 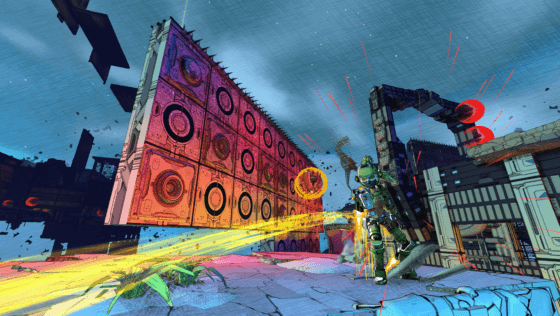 Super Cloudbuilt‘s soundtrack is fantastic; an eclectic mix of techno and drum and bass that really gets the blood pumping as you speed though the levels. The music turns atmospheric depending on what Demi is doing and then to fast-paced electronic beats in more intense stages. The developers really did take notice on how certain sounds enhance the game play for the player which in turn, made it that bit more special knowing how much care was taken into consideration even in the smallest details.

Those looking to get the most out of this game will be pleased, as the game is designed with replayability in mind. Those who clear things with all of the collectibles quickly without biting it will get a higher score, which will no doubt appeal to perfectionists and speedrunners alike. There are also a number of secret keys hidden in each level that allow players to unlock things like health upgrades much earlier. There are also tests like pacifist and challenge runs that force players to plan their runs carefully and think outside the box. As frustrating as Super Cloudbuilt can be at times, this all ends to you wanting to do better next time and the time after that and so on. Players will find themselves coming back to challenge themselves for hours! 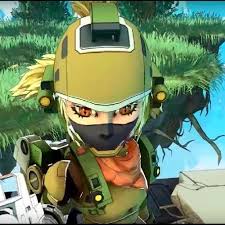 Super Cloudbuilt is a pleasant surprise that manages to impress on a number of fronts. Its parkour action is intense, enjoyable, and encourages creative play. It’s certainly not a game that will cater to everyone’s needs but for those that want a very methodical game about using your reflexes and speed to win, then Super Cloudbuilt is totally worth the cash. Controls may take some time to get used, but after a few stages, players will be able to fly through stages in search of the fastest way to complete it and score a high place on the Leaderboards as if it were second nature. Highly recommended to platform gamer and especially Sonic the Hedgehog fans! Super Cloudbuilt left me on Cloud 9 and raced into my heart with a speedy Thumb Culture Gold Award.