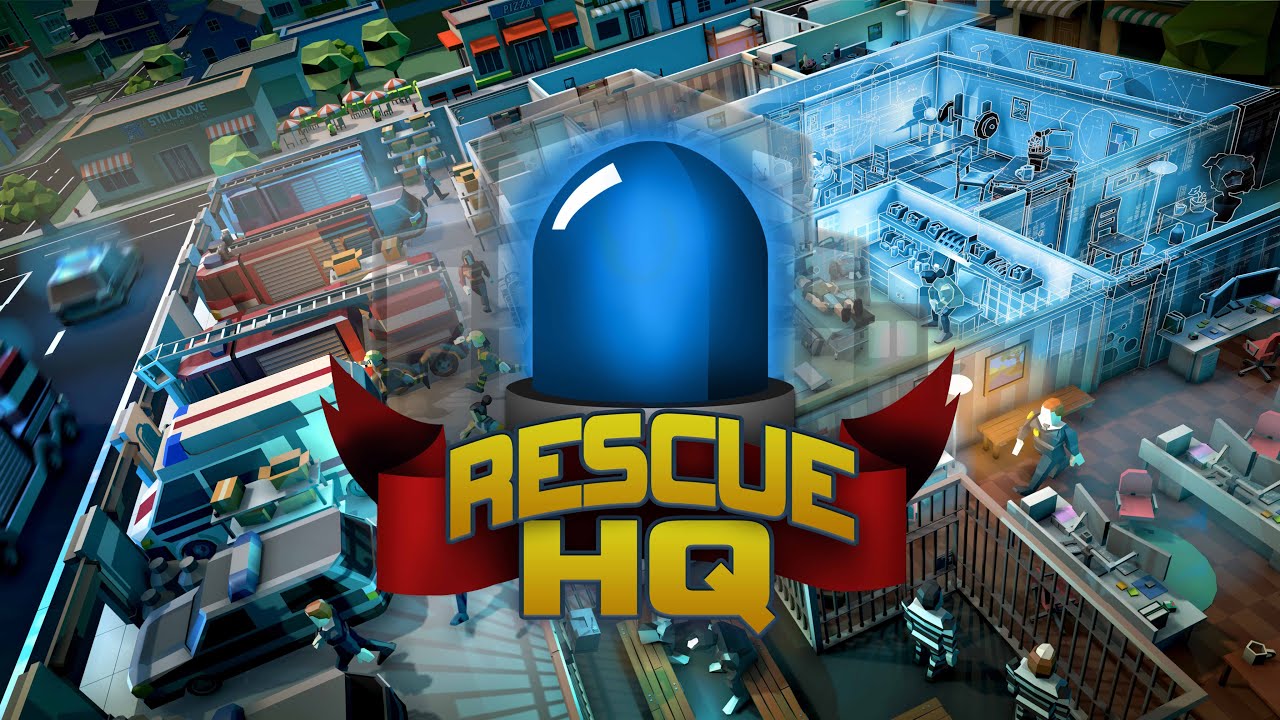 My childhood was very much similar to adulthood, my hobbies were games and one of the most memorable ones was Theme Hospital. I remember spending hours and hours pretending I was a doctor or a nurse building the perfect place where everyone was happy and everyone came out alive (oh my sweet child mind for believing this ). Given Rescue HQ Tycoon to review may just have brought back a whole ton of nostalgia giving me the chance to have a whole service station for police, firemen and a hospital to work with!

Rescue HQ Tycoon is brought to you by developers Stillalive Studios, the same guys who brought us other sim games such as Bus simulator 18. It is published by  yet more people who made sim style games Aerosoft  who  gave us more fun games such as emergency call 112 and truck simulator

The Mayor, a cute little fella with a double chin ( I had to check that it wasn’t me, realized I didn’t have a beard )  pops up , you’re given the option to start on a normal difficulty session or go onto a hard game mode, I personally started off with normal until I managed to get to grips with how the game played and what I was actually doing. You’re then told you need to make the emergency services set up, he tells you to just focus on one, to begin with, but don’t let this fool you, you’ve got to pre-plan your rooms to ensure you can expand them when you’re rolling in the cash and you’ve got more workers than you do criminals and patients! He sticks around with you for around 5 whole weeks, popping his head usually when you’re just about to answer a dispatch or when you’re wanting to do something other than listen to his ramblings, and then leaves you to freestyle the game how you please.

You’re given a huge chunk of cash to start with but the money soon goes down if you’re not hiring policemen, firemen or medical workers! so make sure you’ve got an office with the hiring desks, throughout the game you’re thrown main “even” these are just things that happen during the time you’re doing the normal dispatches, such as riots, planned drug busts and etc. if you successfully complete these you’re given a good bit of cash and some respect stars – these are used for you to unlock extra things such as double beds for your workers to rest in, or services that help further such as a k9 unit, hazard or contamination suits, To get the largest amount of respect per job when you click the alert at the top right it tells you how long until the emergency expires besides it, click that and you’re given a few menus, in which you have to pick the available service needed for your job, a vehicle for your worker to get to and also any additional things needed such as medical kits, foam extinguishers and more!

Your workers won’t just come in and get straight to work, many may be exhausted from the hour’s work they have done, or even just hungry or need the little girl’s room! so ensure that you build the correct facilities to keep your workers happy, not only happy but to keep them in the building if they’re so tired they will just go home and leave you short staffed, or they’ll go find a lavatory elsewhere!

Along with your workers needs, you’ll also be given patients who will come in and get straight to a triage bed, if you have all the correct things the patient needs ( they may need a burns unit, ICU and others to ensure you’re using that reputation to offer your patients everything they can take ) once they are back in shape their insurance will pay you out and there is extra cash, if you fail them they will just go spend their hard earned cash at another hospital meaning you’re not getting rich! With police being one of the three services you’re also able to bring criminals back to the police station and put them into a holding cell for questioning, this also brings you the cash to ensure the little circle above their head is green and you’ve got an officer assigned to question them!

The graphics were okay, it seemed to remind me of Roblox but this could purely just be down to the fact the characters have little squared off faces! It was clear where things were, what they were and was not ever blurry! so they did great in that aspect,  personally, I don’t think games like this need top of the range graphics and they’re fine with even just basic ones!

A soft almost relaxing tune is playing along throughout Rescue HQ Tycoon, and then when there is a new call and you need to dispatch your chosen service you hear all the sirens, garage doors opening/calling beeping of medical machines and it all fits in just perfectly, they did great with audio. 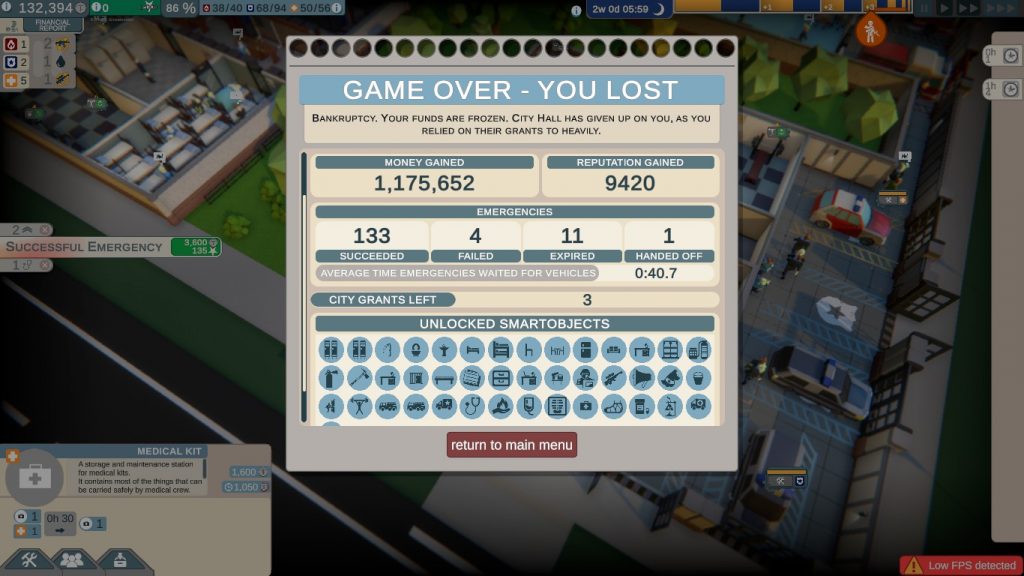 Given the fact I recently found out that you can apply mods to Rescue HQ Tycoon, it has opened up a lot of options in regards to how you play it, meaning no matter what you can always start a new game, have a personalized map of how you want and even personalize your crew! given just the base game and two maps with two difficulties I am almost certain I would be able to spend yet more hours, days, months playing and having fun on it! you would certainly not get bored very easily.

Rescue HQ Tycoon  was actually a pretty amazing game, although at first I felt it needed to have a bit more of a tutorial in regards to quick keys, or explaining that the names of vans etc are in some kind of Morse code ( at least to me, I have no idea in regards to fire engine names and all that jazz ) so wasted a lot of my first few hours being annoyed and angry at the game. yet when it clicked and I finally got to grips I could probably not even say a bad word about it! amazing little game with loads of gameplay options and time! I will be awarding the Thumb Culture Silver award!