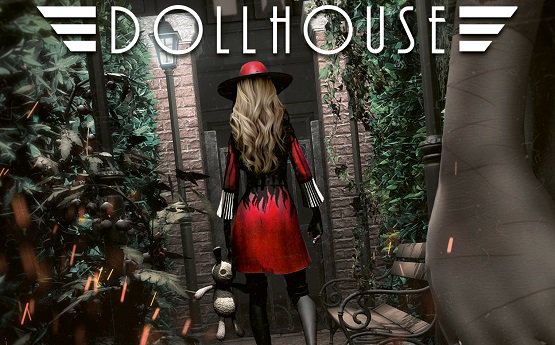 When finding out what game I want to review I always check out what kind of game it is, and as someone who plays a lot of horrors and watches numerous horror films with minimal flinching I thought would take Dollhouse and put my horror gaming skills to the test, but it was not like any other horror game I previously played!

From the creators of many games including Ether One and Truck Driver SOEDESCO have teamed up with Creazn Studio and they have released this wonderfully creepy psychological horror 1950’s Hollywood film noir for us all to enjoy! it is available on all PS4, PC and Xbox One.

You’re an ex-detective called Marie, who has awoken in a location she does not know along with amnesia, the only thing you remember is the death of your daughter. You can hear a woman’s voice in your head, She is called Rose and will help you throughout the maps by giving tips, or telling you where certain items are, her goal is to ensure you get out of this hell hole alive but you’ve got to rely on finding the right path and pickups along the way, all with avoiding the many silent killers and pursuer coming for you.

While going around the mazes you have to recover lost memories to help unlock the door, these look like old projector tapes and aren’t that hard ( if you look everywhere) to come by! the only issue is you have to look throughout the whole map for these, along the way you will also find new memory walls to “flash” with the charge pick up which unlock a new area, words of what appears to be a journal on the wall so you can work some things out whilst reading them, but all at the same time as looking for these items you have dolls coming at you when your back is turned, the killer walking around trying to find you and even traps that can stop you in your tracks.

A very helpful bit of mechanic on yourself gives you the focus ability, which means for a short amount of time you’re able to see through the killers eyes, highlighting any memories or items you may need along the way, but during this time they very quickly manage to get closer to yourself as they know your exact location! Luckily there are some things that can help you around the map to escape your killer or to help you find things like doors and items, there are numerous perks you can use within the game from fleet – faster movements to get away to ones that allow you to see gates or doors which are open (shown in green) or unopened ( locked – shown in red ) these can change and help the gameplay you’re having.

I was hoping I could get a few games on multiplayer where I could experience the game along with other online people! unfortunately, it appears that not so many people are playing dollhouse yet and it’s impossible to get a game, not one person despite my hundreds of efforts ever joined my lobby and I didn’t join theirs either, so I can’t really comment on what the gameplay there is like. I feel as though the games jump scares and fear factor soon got boring as you become very aware as to when things are coming, or when things move. The greatest thing about the game is that each and every single map is freshly generated so you don’t have the same in-game experience as the game before so I loved that idea!

The graphics for dollhouse seemed ok, I feel like there could have been a lot more put into it but I guess there is only so much you can do with hedges and mannequins, at times the mannequins kind of blended in with the scene, I’m unsure if that was a graphic reason or purely just to make you jump that little bit more! the game is pretty much black and white throughout the game which added more tension to the great atmosphere.

The audio  seemed very crisp and clear, from hearing the pursuer saying they’re coming to get me from hearing the small audio tune of the mannequins when they start moving the alerts were very well made, all I can say is if you have headphones on don’t turn them up to the top, when the pursuer is chasing you the tones are a lot louder!

A lot of the time I got a bit confused with buttons, and especially when the pursuer was after me I often forgot to use the arrows to change my perk, I feel like there could be even quicker buttons rather than having to scroll through to find the perk I needed! I also found it strange how the controller sensitivity settings were in “in game settings” as opposed to the controller settings too. it was easy to move around and analyze things so that’s a positive!

Putting together what I thought was good and what I thought was bad I’m probably very half and half regarding the Dollhouse, I believe if I managed to play the multiplayer it could have massively affected my view on the game, but as it becomes very much repetitive and less scary it kind of knocks off the horror effect, I did enjoy the mystery side along with the thrill-filled ( at times ) chases! so I will be awarding the Dollhouse the Thumb Culture Silver Award!

To read more of our reviews on horror games please click here!