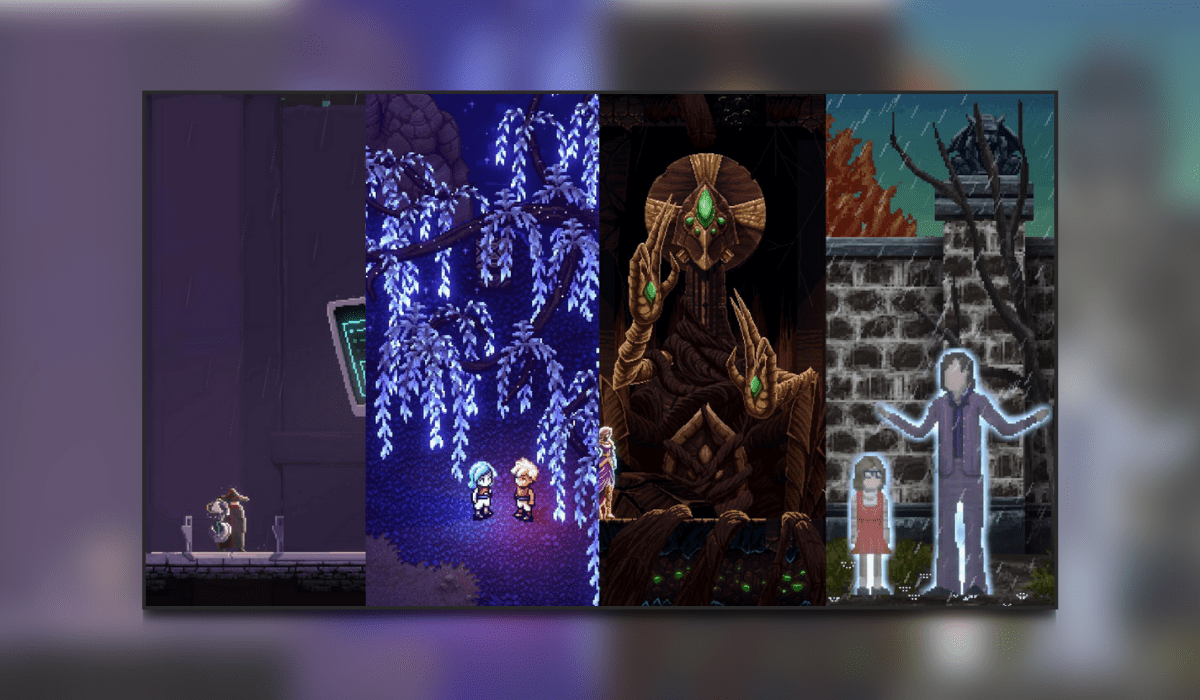 In what seems like a heartbeat, 2022 is now in full swing and already filled with ample gaming promise. Titles like Horizon: Forbidden West and Elden Ring already have gamers aboard the ray-traced and perfectly rendered hype train, eagerly waiting to see what modern marvels are in store this new year. But down the quirky and colourful virtual tracks of indie gaming, there’s a different hype train rolling by. No less intricate in its design, but with a more ‘92 than ‘22 kind of flair. The pixel art hype train!

Pixel art indie games have seen a tremendous surge in popularity in recent years. And if this year’s release schedule is anything to go by, they show zero signs of slowing down yet. And we at Thumb Culture are all kinds of here for it and ready to jump aboard!

Here are just a few of the most promising pixel art games keeping nostalgic visuals alive in 2022 that we can’t wait to get our hands on:

It may be a new year, but one thing gamers will always have an appetite for is a futuristic action romp. And SANNABI from Korean developer Wonder Potion looks set to fire on all cylinders. As a retired veteran with a powerful prosthetic arm, you must traverse a dystopian mega-city, corrupted and scarred by the ruling conglomerate, for one final mission: to discover what really happened during a blackout when its citizens mysteriously disappeared. And who, or what, is the enigmatic entity known as SANNABI?

Trailers and demos showcase an exciting blend of slick animation and high-octane action. Your prosthetic arm with a powerful chain hook becomes your all-purpose tool of travel and destruction. Players will need to be a quick study as they dash through a hail of bullets, dispatch ruthless enemies from all sides and overcome complex platforming puzzles with split-second timing and precision. And naturally, the action is backed by an atmospheric electronic soundtrack to both evoke and excite along the way.

With these promising aspects, SANNABI seems on track to be a strong debut from Wonder Potion and give us plenty to get all fired up for.

BEYOND THE EDGE OF OWLSGARD

Many things define a ‘90s childhood, but if you’re anything like me, a good portion of it was filled with animated movies and point-and-click-adventure games. Simply at first glance, Beyond the Edge of Owlsgard from WatchDaToast evokes all of those memories of days shaped by Don Bluth, LucasArts and Adventure Soft. This tale centres around Finn, a young roebuck whose family has gone missing, one of many mysterious disappearances in the anthropomorphic fantasy kingdom of Velehill. Along with his new friend Gwen, Finn sets out on a journey to unlock the mystery, unaware of what dark secrets they will uncover.

Opting for a highly recognisable verb interface and inventory footer, classic point-and-click fans will feel right at home here. The vibrantly painted locales, bold animation and charming character designs also evoke a warm sense of nostalgia whilst immersing players in a very new whimsical world. And, while inventory item puzzles will play a huge part, WatchDaToast also states that Beyond the Edge of Owlsgard will ‘return to the “adventure” aspect of the genre’ through exploration, uncovering secrets and dealing with danger.

Longtime fan or not, this is definitely a game to watch out for.

Pixel art and Metroidvania fans have always been a magical combination. Some titles are among the best in the genre. And there may be another great title to add to this growing number in 9 Years of Shadows. Another debut, this time from Halberd Studios, this game sets the scene of land cast in shadow and robbed of colour and hope, originating from Talos Castle. Only young Europa, aided by her trusty halberd and faithful companion Apino, has enough will left to fight to bring colour back to the ailing land.

Any fan of the bright and colourful like myself will find it difficult not to be besotted with the sublime artwork and animation showcased in the trailers – the colour palettes and lighting effects are a feast for the eyes! Music and the elements also come into play; players will need to switch between Europa’s elemental armours to take down colossal enemies and use music to help heal the world, learning new musical abilities along the way. The latter is particularly exciting with Michiru Yamane and ​Norihiko Hibino (of the Castlevania and Metal Gear Solid series’ respectively) at the composing forefront.

It may be a long wait for 9 Years of Shadows, but we reckon it’ll be worth it.

One of the most anticipated pixel art games—and indeed one that’s had precious little teased about it—has finally entered the release date fray. From Sabotage Studio (the developer behind The Messenger) comes Sea of Stars, a turn-based RPG to fill the Chrono Trigger shaped void in our hearts before eclipsing it. As the children of the Solstice combine sun and moon abilities to perform Eclipse Magic. You must adventure across the world putting a stop to the hellish creations of an alchemist known only as The Fleshmancer.

December 2021’s trailer showed off a breathtaking fantasy world with dynamic lighting and beautifully smooth animation. As well as intuitive combat. Like all good classic RPGs, there are a wide variety of colourful characters to meet and adventures to be had combined with Sabotage’s recognisable twists and quirks. But if a change of pace is wanted, sailing, fishing and tabletop games are but a few different ways to simply take in the world of Sea of Stars. Oh, and Chrono Trigger’s Yasunori Mitsuda is a special guest composer. Just throwing that out there.

Time to get watching those 2022 holidays!

CATS AND THE OTHER LIVES

It’s probably crossed your mind at least once what a day in the life of a cat would be like. We’ve all been there, and Cultic Games knows it. Cats and the Other Lives puts you in the paws of Aspen, a house cat who has been a close companion to many generations of the Mason family. When grandfather Bernard dies, the family returns to their childhood home. Memories and tensions bubble to the surface, with Aspen right in the midst of it all.

For those expecting a cutesy kitty adventure though, think again. This is very much for mature audiences as the strong language and themes reflect the emotional undercurrents and deep rifts within the fractured Mason family. Through Aspen’s memories, we see fleeting moments, feelings shared and family secrets long thought buried. And all through design elements based around the behaviours and psychology of a common house cat. Animations and sound reflect this also in the blank faces and incoherent blurred voices; cats would only recognise body language and vocal tone, after all.

Looking set to tell an exquisitely deep and multifaceted story, Cats and the Other Lives is an interactive adventure it would be sacrilege not to dig your claws into!

These titles and many more are just a taste of what pixel art wonders await us in 2022. Even if you have a season ticket for the cutting-edge hype train, it’s worth switching trains for a while and seeing where the journey takes you. You might just discover a new virtual home from home.

One thought on “Pixel Art Powerhouses Coming in 2022”