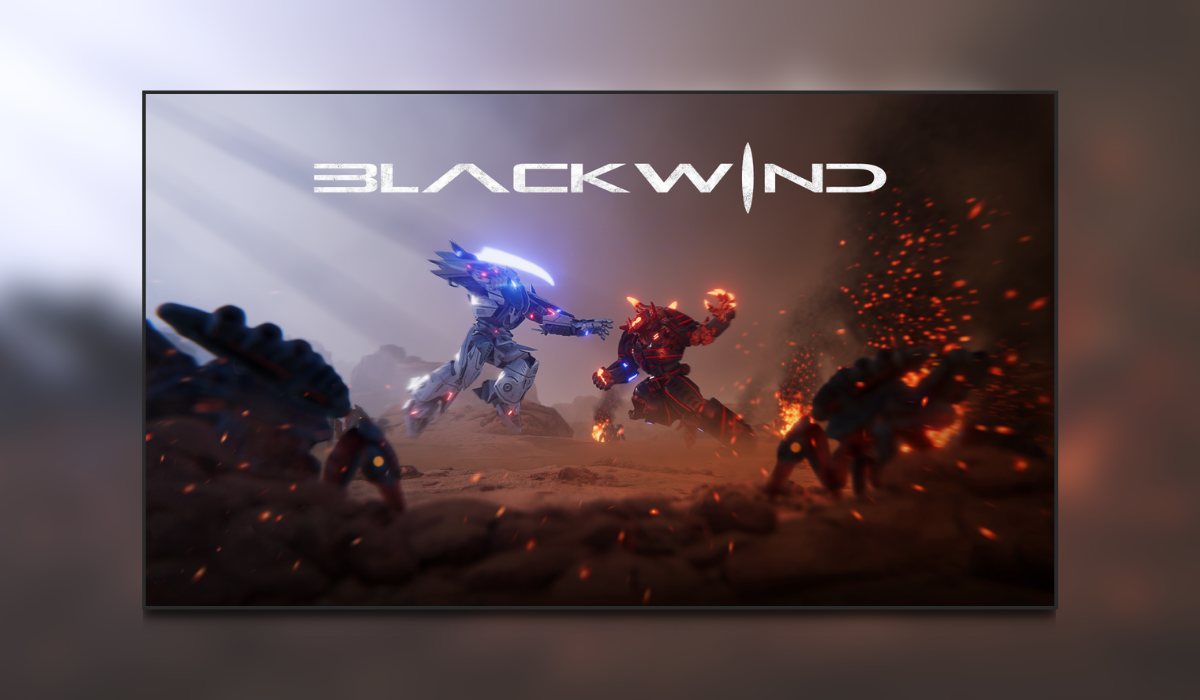 Developed by Drakkar Dev and published by Blowfish Studios. Blackwind is one hell of a hack and slash platformer that will be available across most platforms. On checking Blackwind out via the trailers I was getting LAPD Futurecop vibes. I do wonder just how much this will live up to my last gaming experience similar to this.

Go To Your Safe Place, On This Occasion, It’s A Mech!

This will be the first title I play on the Playstation 5 so I have no idea what to expect or what is in store. So join me as I start a new adventure in gaming and in Blackwind.

As soon as the game starts we jump into the storyline learning briefly what the current mission was supposed to be. James Hawkins, the son of the famous Professor Hawkins are on board the Pandora on their way to Medusa-42. With them they have a one of a kind prototype Battle Frame, the Battle Frame is a war-ready mech with AI. The Pandora starship is attacked on approach and in an attempt to save his son, the Professor asks James to seek shelter inside the Battle Frame and ejected him to the planet below. James is thrown in at the deep end and has to learn how to control the mech. Not only this, the dreaded alien bugs Raknos have taken over Medusa-42. James will also need to learn how to defend himself if he is to reach the base to see if his father survived the crash.

Now you know the start of the story (don’t worry this will be spoiler-free) the game begins. Like James, you need to learn how to control the mech and understand what it can do. Fortunately, the devs have developed a storyline that will take you through the abilities step by step so you learn as you go. The further into the game you get, the more you unlock. The abilities tree spans over various elements from movement, armoury, special abilities and skins. The skins you find as you venture out in the game, so make sure you keep an eye out for these.

To upgrade and learn new abilities, you use orbs that are collected around the maps. Orbs are collected from crates, objects on the landscape and by defeating your enemies. The larger the enemy the more orbs you receive. Depending on your play style will depend on what you want to upgrade during your gameplay. I went as an all-rounder to understand the full mechanics of Blackwind. You can create a powerhouse of a mech just by revisiting areas you have already been to as there are some enemies that respawn along the way.

On your travels defending yourself and whilst trying to find out exactly what has happened to your father. You will venture across various terrain types and buildings. Meeting new people and attaining multiple objectives along the way, This war-ridden planet has secrets and highly valued elements.

Graphically, As this was the first title I have played on the Playstation 5 I didn’t have anything current-gen to the spec of the PS5 to compare it to. However, casting my memory back to when I was the owner of an Xbox One I felt that even though it was only a top-down title the graphics were far superior. I don’t have the best monitor in the world so I was only given a taste of what the game could potentially look like. Blackwind was extremely smooth when it came to movement with no buggy movement. There was only one point where my son accidentally jumped into the scenery. However, he was button-bashing so something was bound to happen.

The audio disappeared into the background most of the time so you could concentrate on your mission. However, when things started to heat up so did the guitar strings. Fast-paced melodic rhythms are played when you are making your way through the array of enemies available to down.

I have personally spent around 13 hours on Blackwind. However, I did a lot of revisiting and scouting for skins. I personally think there are around 10 hours of gameplay available on a single run, obviously, if you run all 3 difficulties this will add up. Also for the completionist, it will add more time on if you are hunting skins and trying to fully upgrade your Battle Frame.

Not only this there is also a local multiplayer option which I imagine is some serious fun. Unfortunately due to current circumstances, this wasn’t possible, however, it is something I will be checking out in the future.

Overall I really enjoyed jumping into the mech and causing chaos with the enemy. It had a great storyline that was easy to follow with some great twists and turns. Not only that, there are some nods to some absolute cult classics in there. I won’t mention them as we like to keep it spoiler-free. However, when you see them you are bound to smile. The title is extremely well thought out to provide the end-user with all the elements of a high-end mech title simplified. I couldn’t get enough and I already would like some DLC, please!