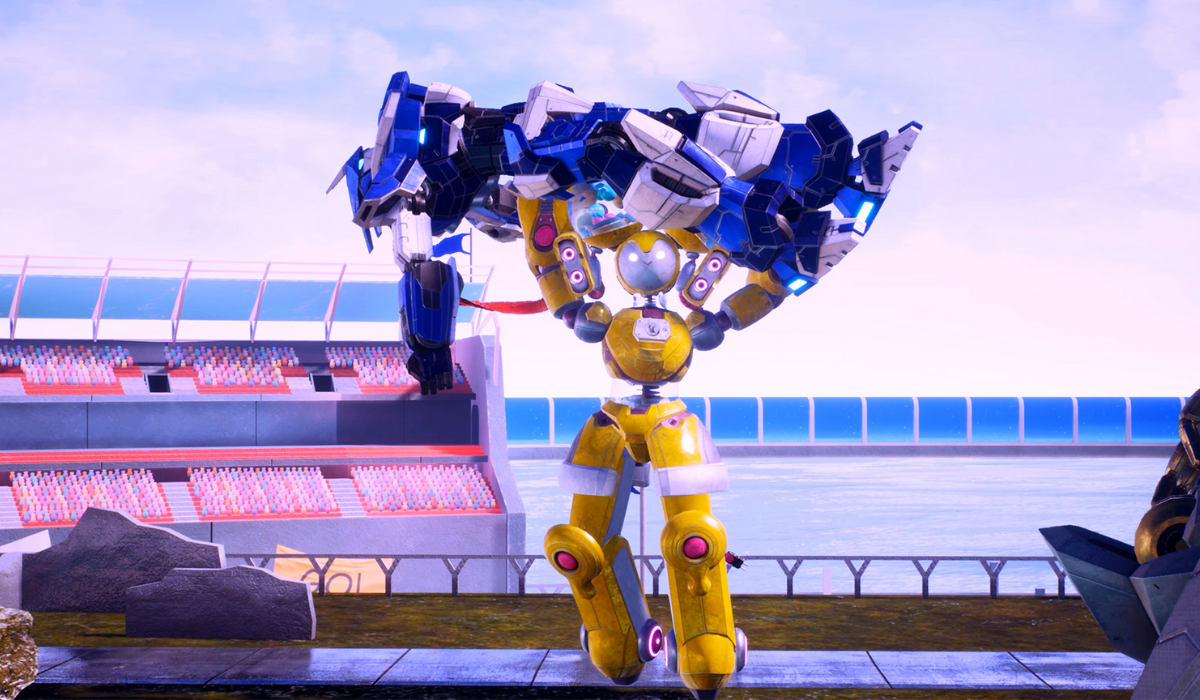 Imagine at the end of Pacific Rim when all the Kaiju had been defeated and the Jaegers had served their purpose, the world governments decided to use the Mechas in WWE. That’s the premise for Override 2: Super Mech League.

Developed by Modus Studios Brazil and Maximum Games, and published by Modus Games, it is available on Steam, PS4/PS5, Switch and Xbox. This is the follow up to Override: Mech City Brawl which got average review scores seemingly due to framerate issues, lack of depth and difficulty in finding online matchups. Can the sequel address these issues successfully?

I’ve not really picked up a Beat ’em Up since the likes of Tekken 3 and Soul Caliber 2. I’m interested to jump in and see what Override 2: Super Mech League has to offer.

Have you played Override or a Mecha beat ’em up before? How did you find the slower combat compared to something like Tekken? Let me know in the comments below!

Override 2: Super Mech League starts you out as a rookie Mech pilot looking to rise in the ranks of Mech Battle Leagues. You will quickly gain an agent who sees the potential in your ability. Together you will take on the world of Mech battles, sponsors and exclusive Clubs to rise to the very top. Battling it out in various types of battle, set in destructive environments strewn with pitfalls and weapons, do you have what it takes to become a legend?

The mechs all have a basic set of 4 moves: light and heavy punches and kicks. You access Special moves by combining 2 of the button presses for the basic moves e.g. R1+R2 will access one special move and R1+L1 will access another. It is also possible to perform combos. Pressing LP, LK, HK with Ultraman, for instance, will grant you a 3 hit combo. These are particularly useful as you rise in the ranks of the leagues and the AI or your human opponents becomes more competent as combos will hit faster than 3 or 4 single attacks. Blocking, grabbing, dashing and jumping make up the rest of the basic abilities.

Fighting with the mechs is generally quite slow and can feel sluggish, but realistically it would take a great deal of effort to manoeuvre such large fighting machines. The developers have made the choice to represent this realism in the combat style. You will be required to watch closely, dodge or block incoming hits to interrupt combos and deliver your own devastating string of moves to conquer your opponents.

The final attack ability you have at your disposal is the Ultimate. This is a special move you only get once it has been charged. You can charge the ability by standing within the bounds of a glowing yellow area that appears periodically somewhere in the arena. At first, you will need to be within this area for longer than 1 cycle before you can unleash the attack but as the battle goes on, the requirement will decrease, making it easier to earn a full charge.

Being a smaller indie title, Override 2: Super Mech League does fall victim to having a small player base and therefore you may struggle to find online partners. I managed to get a couple of online games played, but also found a lot of the time there wouldn’t be anyone else around. The saving grace here is that all battles, barring Club Duels, can be played offline against bots. In terms of the single-player campaign, there isn’t much on offer here apart from trying to earn S Rank in each league. Zoe, your agent, gives you dialogue throughout the game that acts as a sort of story. Other than that, this is a simple beat ’em up.

There is a game mode I was unable to try out as it seems to be unavailable for now. This is the Club Duel. Once you reach Veteran status you are able to join 1 of 3 clubs. You then have access to Club Duels which will pit you against members of other Clubs and allow you to gain influence. You swap influence points for currency at the end of a 7 day period. Quite how this mode will work in practice I can’t say but I’ll pop an update in here once I’ve been able to take part.

The final game elements to mention are the sponsorships and customisations. You will have Sponsorships offered occasionally after having a win in the league. They require you to complete a certain goal in order to be rewarded with a small amount of currency. I declined these most of the time as I felt they were too restrictive on how I played. For example, one of the criteria might be block 100 hits in 30 minutes. That doesn’t sound too bad on first glance, but the 30 minutes is real-time from the moment you accept the sponsor. Thankfully there’s no real punishment for failure. You can purchase a large number of customisation items with your in-game currency and you can equip each Mech with 3. In terms of Mechs, there is a total of 20 to unlock and 4 in the DLC Season Pass.

Graphics
The Mechs and Arenas are beautifully detailed throughout and varied in their styles. Each different location has it’s own style and quirks and each different mech stands out as it’s own character. As mentioned earlier, the first Override game suffered from framerate issues and Override 2 does still have these problems at times, but quite rarely. I played on both PS4 Pro and PS5 and, surprising absolutely no one, the experience on the newer console was definitely better. On PS5 I only really saw frame drops when playing 4 character fights in busy Arenas. On PS4 Pro the drops were more slightly more frequent.

Audio
The soundtrack is pleasant and unintrusive. There’s a good variety to the background tracks for the battles. I find my self jamming along to the menu theme every time I load the game up! You’ll also be able to listen out for audio cues too. These allow you to quickly tell when an Ultimate Power charge area has spawned or when the attack is ready to use. Zoe’s voice acting is well performed too, though you will hear the same lines come up a lot as you play.

Override 2: Super Mech League offers a number of ways to pit your gigantic metal soldiers against each other in battle. You will have all these unlocked within a few hours of play.

Alongside the leagues which serve as the main game, you have 3 other modes.

How much time you spend in Override 2: Super Mech League is going to depend on how much you like Mechs, how much you like beat ’em ups and whether or not you have friends who also own the game. I’d like to see the game included in PS+ or GamePass in order to boost the numbers of people online.

If you’re attempting to unlock all Mechs, customisations, avatars and titles you will be looking at around 30 hours of playtime versus the AI. Playing against the online competition will increase this depending on your skill level.

If you’re looking for a casual multiplayer fighting game Override 2: Super Mech League might be for you. The only thing really letting it down is the online community size currently. If you want a single-player campaign with a deep of story then you won’t find that here. I had fun rising in the ranks of the leagues. I’m very grateful I was able to play against bots as well as the occasional online fight. Not only because it meant I was able to play when there was no one else online, but I was also able to compete! 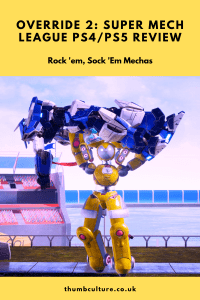