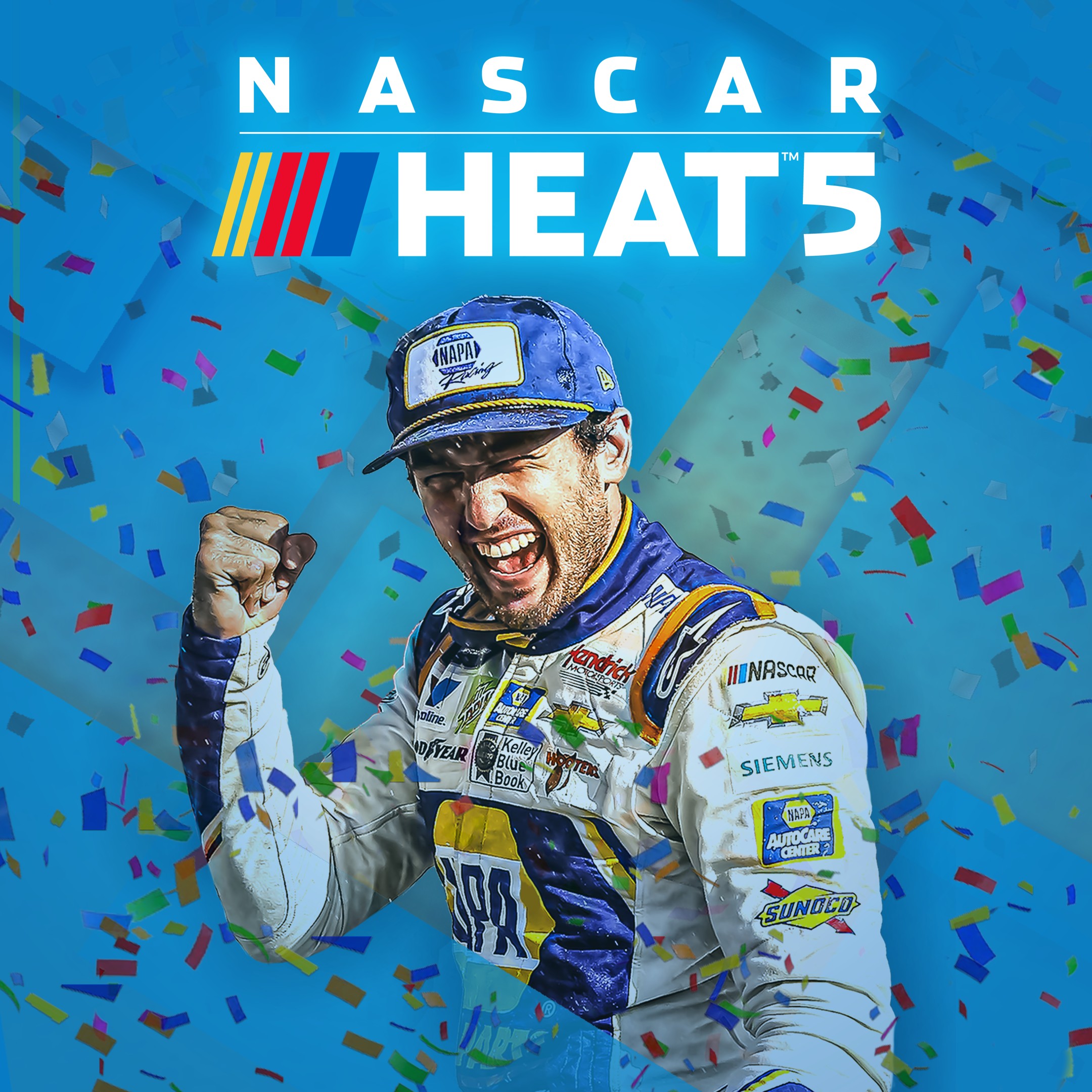 Hello! today I am here to review NASCAR Heat 5, published by Motorsports Games and developed by 704Games. Currently, NASCAR Heat 5 is available on Playstation 4, Xbox One, Windows PC (DVD and via Steam). 704Games have a sole purpose of rebuilding the NASCAR video game franchise and bringing you the lifestyle and excitement that comes with NASCAR. I will be reviewing the Playstation 4 Pro version using a joypad and also a racing cockpit setup.

You begin your career on NASCAR Heat 5 as a rookie in the Xtreme Dirt Series and moving through the NASCAR Gander RV & Outdoors Truck Series and NASCAR Xfinity Series before you reach the pinnacle – the NASCAR Cup Series. This is how I chose to begin anyway. I wanted the full NASCAR Heat 5 experience. You could always start right at the top in the NASCAR Cup, but where is the fun in that?

Online races are allowing up to 40  players to race together. Along with an eNASCAR Heat Pro League. Here you could have the chance to drive for a real-world NASCAR team on the esports stage.

There are 34 officially licensed tracks to race in NASCAR Heat 5. Most of these tracks, the chances are unless you are a NASCAR fan. You’ll have never heard of them, so I will only name the most famous tracks Daytona International Speedway, Indianapolis Motor Speedway and Talladega Superspeedway. Also, they have added 5 fictional dirt tracks for some reason. The reason? I don’t know or understand why since this is supposed to be a full NASCAR experience.

I mentioned that I would try out 2 different setups for NASCAR Heat 5. First up I used the traditional method of gaming……. The joypad. NASCAR Heat 5 is fully playable on a joypad from start to finish. This should please the more casual racer as there is nothing to stop you getting your petrol head fix. That being said, personally, the Xtreme Dirt Series was my preference for a joypad. I always felt like I never had full control of my truck or NASCAR on the steep inclines and often found myself zigzagging on the incline of the turn.

NASCAR Heat 5 becomes a superior game in every way, shape and form when I was sat in my cockpit using my wheel setup. Every vehicle I drove felt perfect and I soon found myself racing and drafting with my drafting buddy to victory. Pulling off ridiculous burnouts and doughnuts to please the crowd after my victories.

I appreciate that there are a lot of race fans that think it is all about driving in a circle. There is far more to winning a race than just driving an oval. There are a surprising amount of tactics to be used just to seal your victory. Also, I have to say it feels very therapeutic to race those ovals with a tremendous roar coming from all the engines while you race 180 mph in a tight pack. The thrill of knowing that one wrong move will slam you into the wall and send your car to NASCAR heaven. This game is for the racers who love to drive, whether its a short race or a full-blown endurance race, there is something for everyone here.

NASCAR Heat 5 allows you to create your very own team, add staff and extra cars to your team. Show your teams dominance on the track with your car and staff upgrades. There are new team liveries at your disposal. I have to say this was the most disappointing part of the game. It’s just to shallow and a lack of customisation options for me. On racing games, I can often be seen sporting the Thumb Culture logo on my car as I screech around a corner. Sadly you can’t do that in this game as there are no custom logo options.

NASCAR Heat 5 initially disappointed me in this department. There is very little here with not much in the way of landscapes etc. The lighting effects are average. THEN I moved to night-time racing at the bigger circuits. This is the way I expected NASCAR Heat 5 to look. The lighting, the shading, it’s perfect. Initially, there were some graphical glitches in the game with the textures looking off with the mud behind the car and some judder in the scenery as you went around the corners. I can say however that with the latest patch these issues have gone.

NASCAR Heat 5 boasts a country/rock soundtrack and I have to say it’s catchy. I like my rock music anyway and wouldn’t say I am a country fan at all but I found myself enjoying all the music in-game. Sound effects are what you would expect. The guy in the pits calling out if high or low is clear or to hold your position. There isn’t much variety in what he says to be honest. He will also compliment you on a fast lap to spur you along. The engine sounds are right at home with its deep earthy growls or the rubbing of your paint scheme against another racer.

NASCAR Heat 5 longevity is like asking how long is a piece of string. For me, this game could last you a long time. There are a lot of races to win (or lose). you could create your team and work it to the top with all races on 100% length. This would fill your calendar, especially since there are multiple practices and qualifying sessions or hot seat races where you loan your skills out to another team for a race.

To sum things up NASCAR Heat 5 started as a slight disappointment to me but after spending some time on it and experiencing all the game has to offer I enjoyed this game. The same question I find myself thinking about NASCAR Heat 5 is ….. is this game a justified upgrade from NASCAR Heat 4?

The answer is yes and no. Yes if you are indeed a NASCAR fan. You will appreciate the subtle upgrades. No, if you are a casual racer and own number 4 already. On that basis, I award NASCAR Heat 5 a Thumb Culture Silver Award

One thought on “NASCAR Heat 5 – Refuse To Lose”