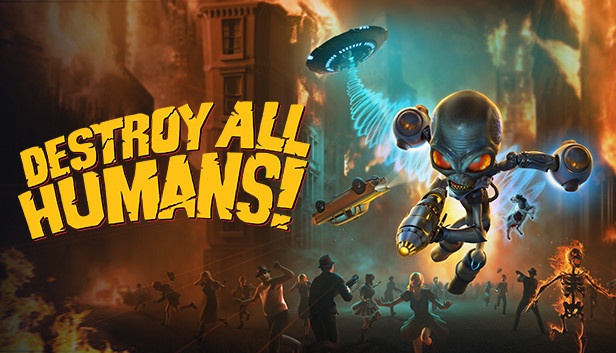 Right now, you are thinking one of three things. You are either thinking “is this the latest game about a particular epidemic”, “Destroy All Humans!  – hmm, where have I heard that before”, or you are thinking “oh my god, DESTROY ALL HUMANS! – they finally remade the game”.  If you’re thinking the third option, then you are dead right with the game being released on 28/07/2020 on PC, PS4, Xbox One and Google Stadia.  Destroy All Humans! it’s a remake, not a remaster, of the cult classic game of the same name released in 2005. The original game was developed by the now-defunct Pandemic Studios, so development has been handed over to a team of 60 people over at Black Forest Games who are noted for their work on the Giana Sisters games.  THQ Nordic have taken the publishing reigns again since acquiring the licence from THQ in 2013.  Almost everything about Destroy All Humans! has been built from the ground up, the only thing to have been carried over from the original game is the dialogue and voices to retain its original charm and humour, albeit enhanced for better quality. The rest of the game is brand new with updated environments, character models and cut scenes created with the use of motion capture.  Lastly, during the development of the original game, a mission was cut which is now present in the remake so that gives something for fans of the original to look forward to.

Destroy All Humans! is a third-person action-adventure style game set in the open world of the United States in 1959.  You play as Cryptosporidium-137, a member of the Furon race but you will come to know this grumpy, hate-fueled extra-terrestrial as Crypto. Interesting fact; the name Cryptosporidium is taken from an actual parasite know to cause watery diarrhoea, otherwise known as, the squits.  Anyway, you arrive to Earth for the purpose of rescuing your earlier clone, Cryptosporidium-136 who has been fatally wounded and captured. But, you travel with a companion called Orthopox-13 who would also like to extract human brain stems to gather information and Furon D.N.A. for the preservation of the Furon race.

The main story does take on a bit more of a sinister turn later in the game which kind of leaves you wondering what your actual objective is, but I like the direction in which it leads.  The fact that as soon as you start the game, you set foot in cow poo and Orthopox-13 believes the cow to be the dominant race really sets the very humorous tone for Destroy All Humans! and continues throughout.

To aid you on your mission you have your shield and a number of weapons, psychokinetic abilities and a spaceship, all of which are upgradable from the mothership which acts as a sort of hub area where you can replay missions or revisit areas for free roam or complete challenges.

Psychokinetic abilities are very useful for infiltration, where if you get seen as the “little green pissant” – an actual quote from the game, you can quickly make them forget.  You can steal their image to use on yourself as a holographic disguise. This disguise does have a time limit so you must keep it up by reading the minds of humans as you go about your business.

There are about 30 missions with optional objectives for the completionist, spread across 6 fictional locations and each of these locations has a set of challenges; Armageddon, Abduction, Race and Rampage.

When you play the game, it feels like a PS2 game, just a better looking PS2 game. Not a lot has been done to update the control scheme to bring it in line with more modern standards.  It has implemented a lock-on feature which is useful, but switching between targets uses the right stick, which is also the control for the camera and as so, I often found myself locking onto targets which I didn’t want to.

Black Forest Games have done a really nice job overhauling the graphics of Destroy All Humans!, but I can’t help but feel that is still room for improvement. The character models, effects and environmental textures are well done, but they just seem to be lacking the detail when compared to that of certain other remakes.  To me, graphically Destroy All Humans! would sit well as a late PS3 game rather than a PS4 game in 2020.  I experienced very little in the way of any pop in or glitches, nothing that would be game breaking anyway.  In fact the only glitch I did experience was a help rather than a hindered, where an explosive barrel was floating next to me in mid air, and I was able to use my telekinesis to fling it an unsuspecting group of humans – for fun.

With the theme of Destroy All Humans! seemingly being inspired by 1950s B-movies, the theremin laden soundtrack is a good choice for the era of the game. The effects are fit for purpose but nothing really groundbreaking.  As I mentioned before, the audio for the dialogue has been lifted from the original game, so what you hear has been recorded 15 years ago.  This could be seen as a bit of an oversight as the voice acting is in need of some improvement, but maybe it is the voice acting that is part of the humour, either way, the dialogue is very funny and you will have some laugh out loud moments.

The main game will take between 12-15 hours to complete, this will obviously depend on your level of skill and how well you cope with the inconsistent difficulty spikes and annoyingly sporadic checkpointing. At times, you will feel that the needless violence can get a tad monotonous, so board your flying saucer and head back up to the mothership where 4 challenges in each of the 6 locations await you, but I highly recommend you gets some upgrades first because without them you may find these particularly tough.  This, for me anyway, is not a game you can sink hours into at a time, but I don’t thank that is the intention. In a single sitting, I couldn’t play any more than 1-2 hours before I started getting bored and wanted to go and play something else.

The game looks like a PS3 game, it plays like a PS2 game, but that doesn’t make it a bad game.  The thing is, Destroy All Humans! wasn’t an amazing game back in 2005, and that is why it earned its cult classic status.  This game has been made to cater to the needs of the fans from the 2005 original, and the fans of that game will love this.  While it is fun in 2020 to run around as an alien with a chip on his shoulder causing all kinds of mayhem, but the fun doesn’t last very long and I think in an age where games last longer with better quality of life mechanics, more could have been done to make this feel like a modern game.

This is NOT a giant leap for mankind – but it is fun, and because of that Destroy All Humans receives the Thumb Culture Silver Award!