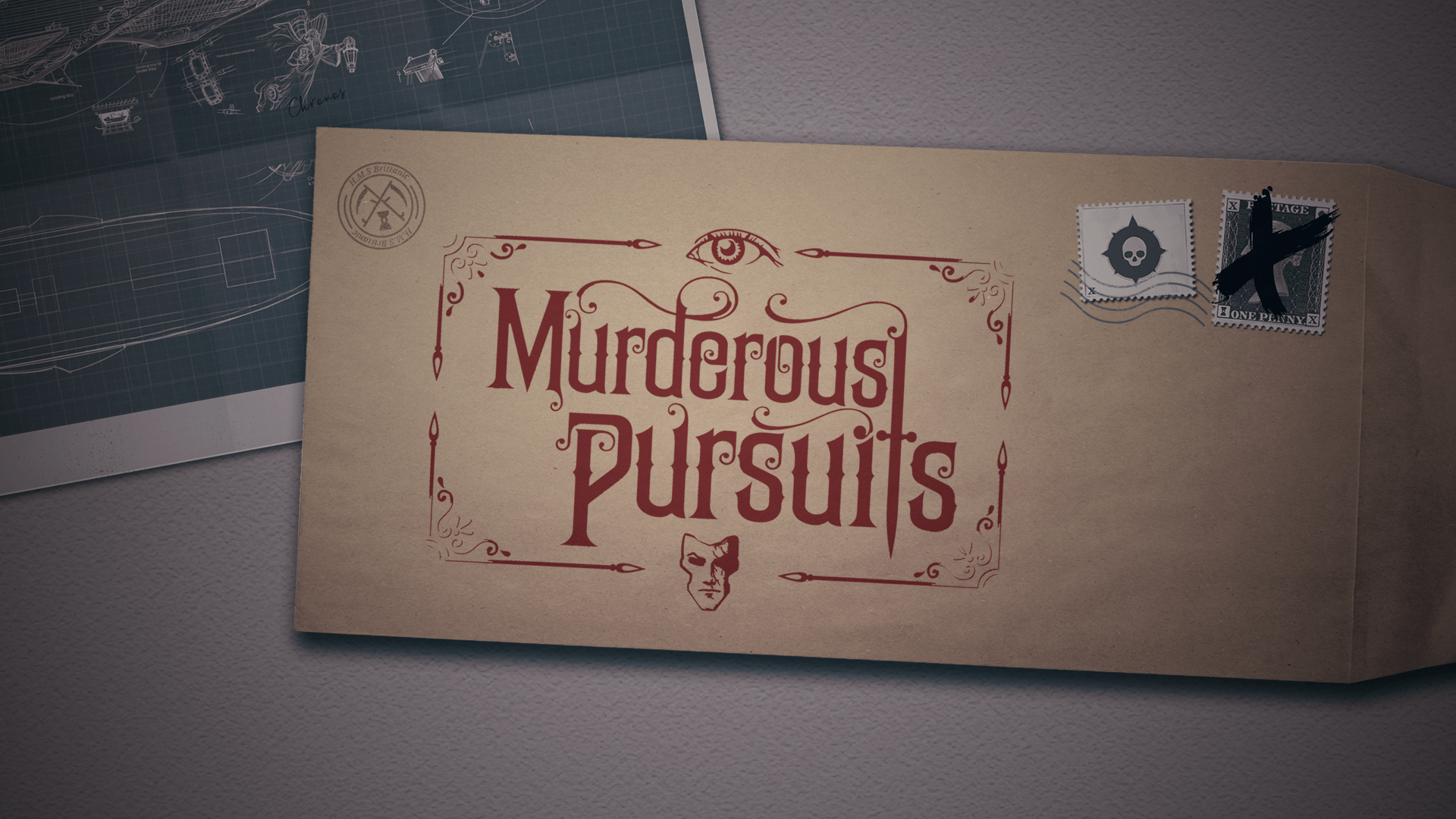 If you prefer to eliminate your foes with stealth, and tactics rather than running in, all guns/swords blazing, then you might be interested in jumping on ship during the Jurassic Period, with Murderous Pursuits.

Blazing Griffin’s assassination focused multi-player title, Murderous Pursuits ran an Open Beta from the 20th of April 2018, until 5am Monday 2018. Now, this one for me had been hiding away. I had seen nothing of the title anywhere before the open beta announcement until a friend of mine told me about it. So it was a lovely surprise to see it a few hours before it went live.

Now, Murderous Pursuits is the toned-down equivalent where if Assassin’s Creed and Dishonored had a baby, and merged that DNA with a hint of The Ship, this is what you’d see birthed. The reason I mention The Ship, is mainly due to the art style of the game, but also because Blazing Griffin are also the developers behind the murder mystery remastered version of The Ship back in 2016, so their aesthetic bleeds through. 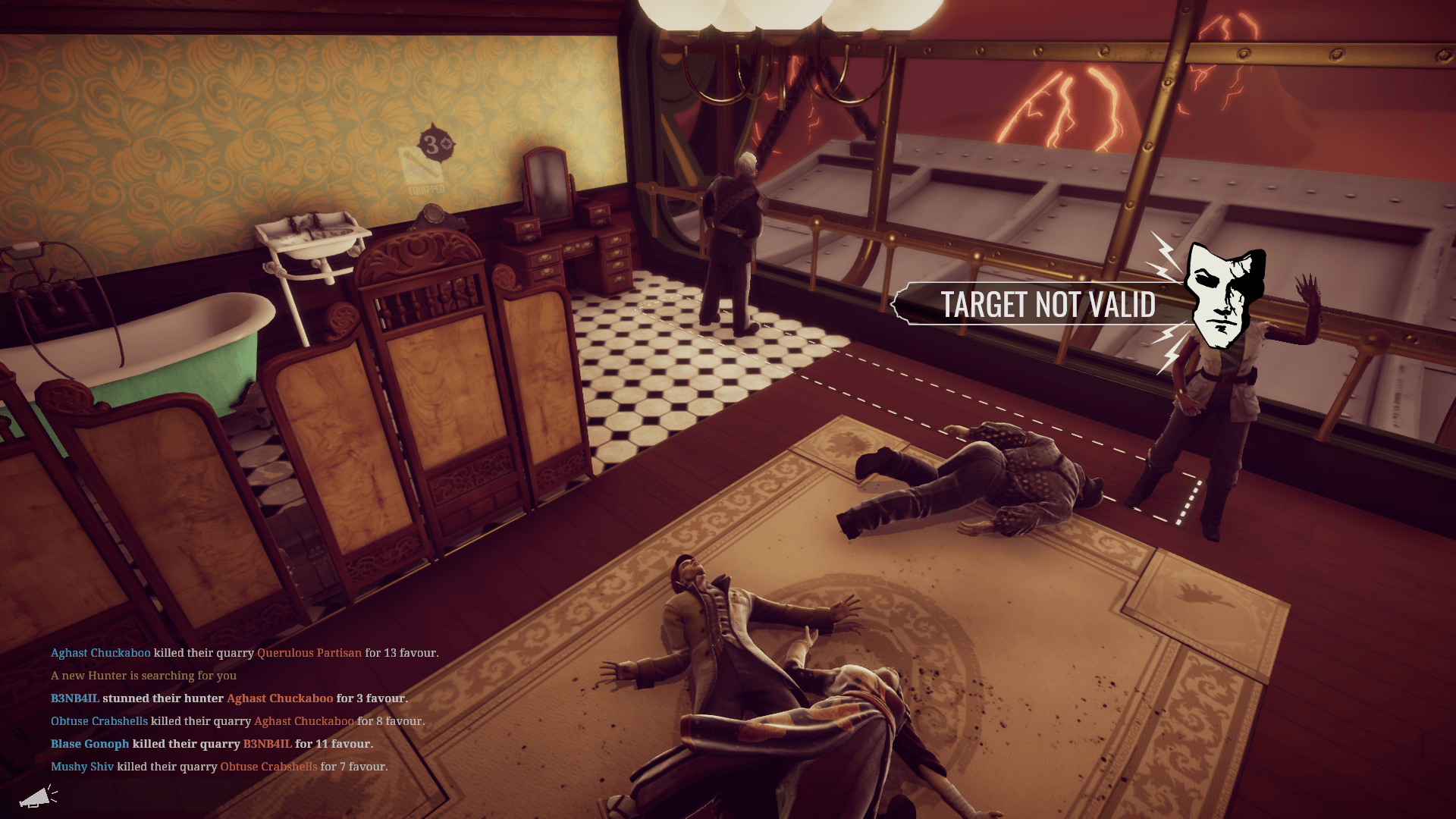 After trawling through the vintage themed main menus, and after choosing from the eight playable characters, and after selecting your two abilities; you get on board the ship with another eight players. Or bots —depending on how it pans out— on board the HMCS Britannic across the available four levels, Music Hall, RCS Laboratory, Engine House, and Backstage. For the purpose of this piece I’m going to focus on playing with other players Online rather than solo against bots. It’s a game that feels fun to play, and it makes you feel like you’re having fun while trying to fight for the top spot

You play as an assassin amongst other player controlled assassins with the simple goal or killing your target, known as a, “Quarry” in the game. Killing them will earn you Favour, or points if you will. While you’re hunting your target, you’re also being hunted by another assassin…or two depending on if you’re performing exceptionally well. So, take the added brunt as a compliment. Your HUD gives you the information you need, such as the rough location of the Quarry, and the number of assassins hunting you, and if they’re nearby.

Surrounding you on board the boat is a large collection of NPC’s wandering around, doing their own things and looking worryingly suspicious. They walk around going from vignette, to vignette. Vignette’s are marked areas around the map that enable players to enter and automatically begin acting as an NPC. They also increase your exposure, which is a weird way to describe it. 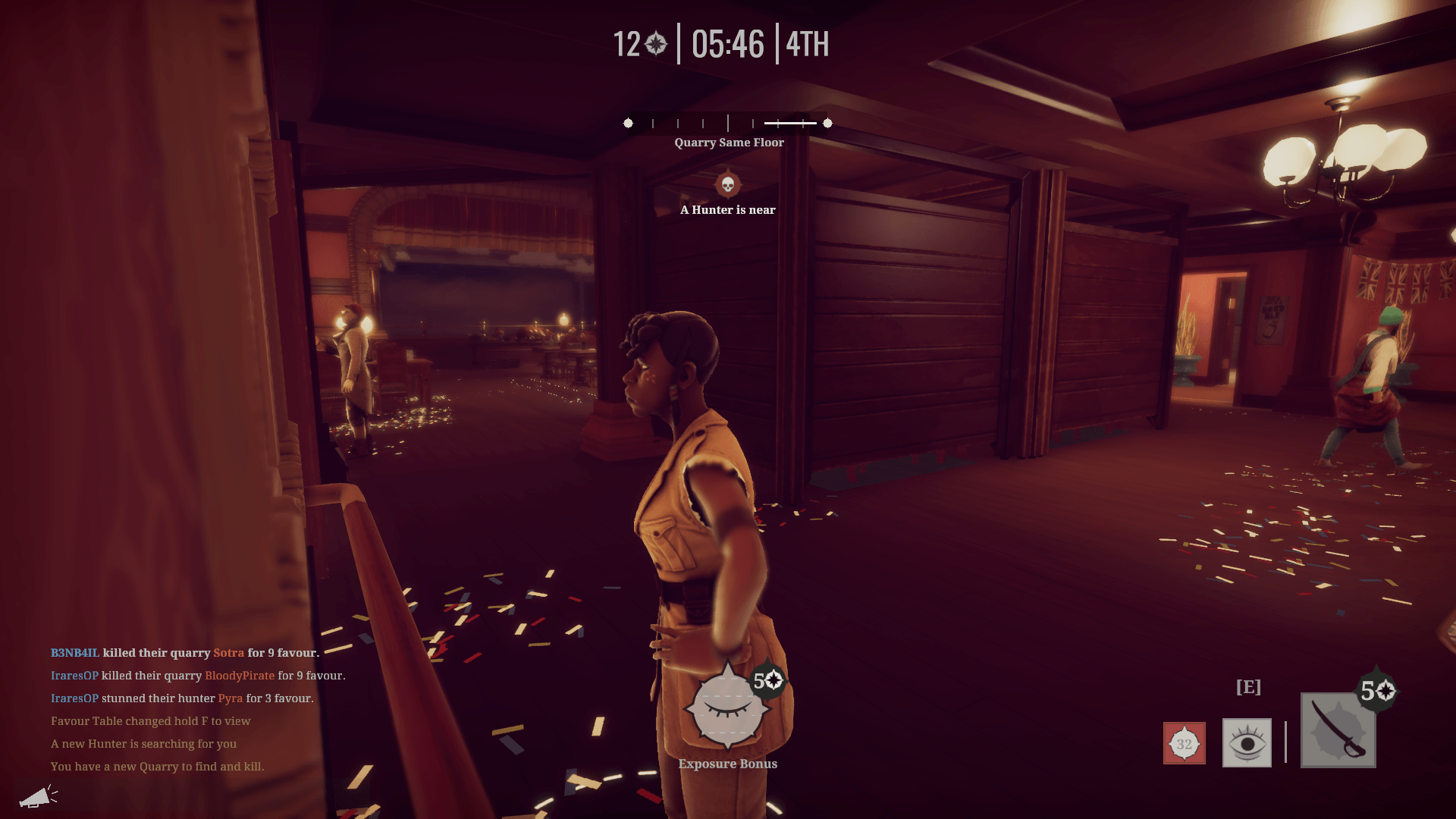 The best way to explain it is, when you’re not exposed, your exposure sits at a hefty five. The more you move around outside of vignettes and perform actions, your Exposure drops. Hitting zero will allow your hunter, and prey to see your location no matter where they are. Getting back into a vignette will increase your Exposure and you’ll be hidden again.

Exposure can be instantly dropped if you’re caught by the guards who lurk in the bigger rooms, but they can often be found sleeping allowing you to get a kill in without being caught during the nap time. You are also equipped with two abilities that you choose from an available five.

These abilities all have a lengthly, one minute cooldown, and with each match lasting ten minutes, you’re forced really to use them as a last resort. 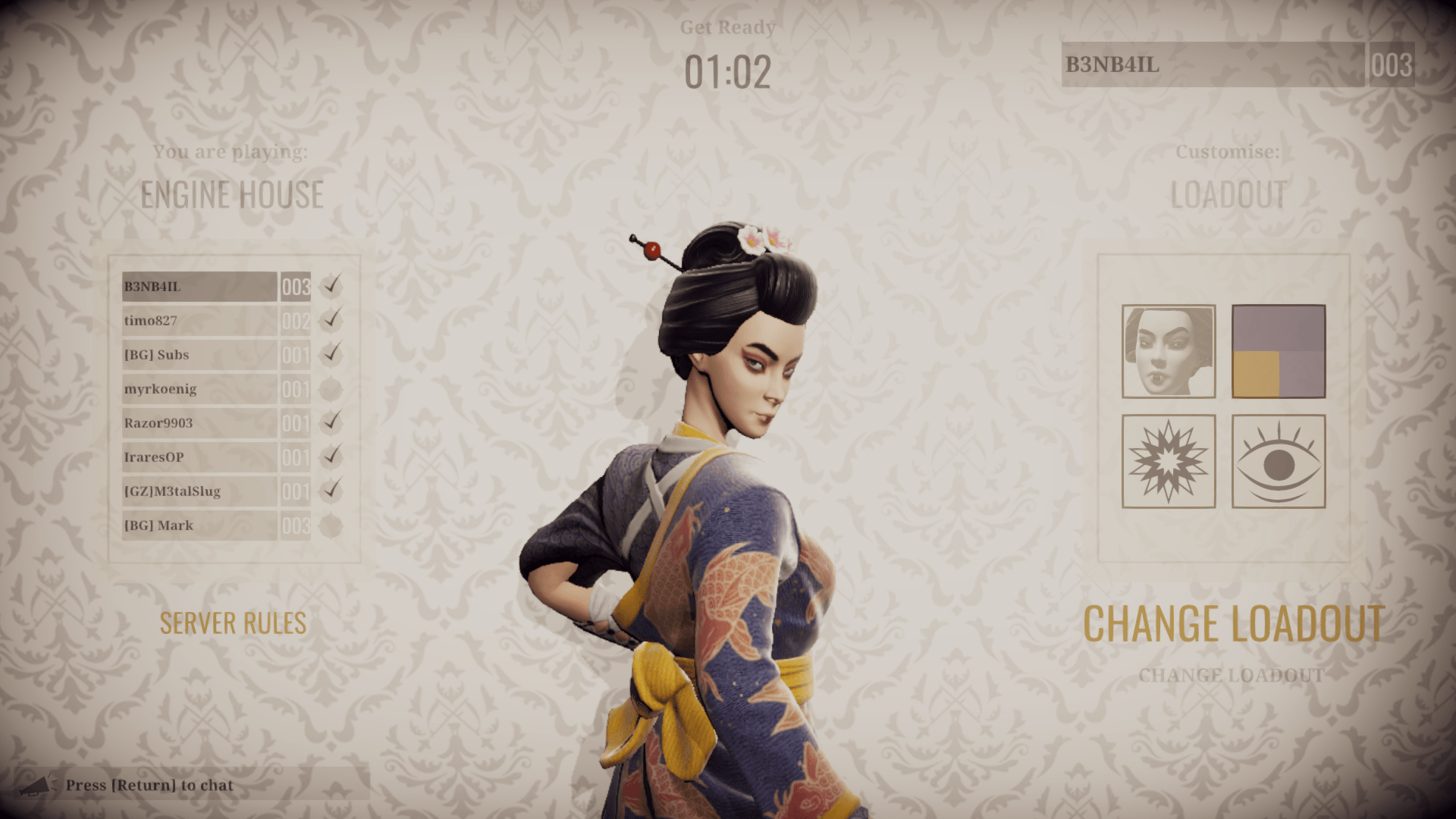 Regarding weapons, there are five available around the map, each one will have a different favour per kill. For example, one kill could be worth five Favours if a sword is used, but using a knuckle duster will only give you 3 Favours. Once the target has been killed, the weapon Favours are changed, meaning if you want higher Favours, you need to go and find the weapons offering the bigger rewards. Oh, and you can slap the ones hunting you which will assign them a new Quarry and you’re safe…for a while.

Phew, that’s pretty much the game explained there. What I wanted to talk about was the way it plays as an Online title, which is very well. You, as a player is having to analyze the movements of everyone around you, trying to determine who is another player by noticing movements that seem unnatural, or noticing someone who has been following you for a suspicious amount of time. Murderous Pursuits is the toned-down equivalent where if Assassin’s Creed and Dishonored had a baby, and merged that DNA with a hint of The Ship

It is marvellous fun, and the blending into vignettes is well done if used right, but the game’s comical form seems to dampen the potential for making the player feel uneasy. Instead you just smirk away a denied kill, or groan internally as a guard stops you from killing someone. It’s a game that feels fun to play, and it makes you feel like you’re having fun while trying to fight for the top spot; whereas other games tend to leave me feeling frustrated with failing. 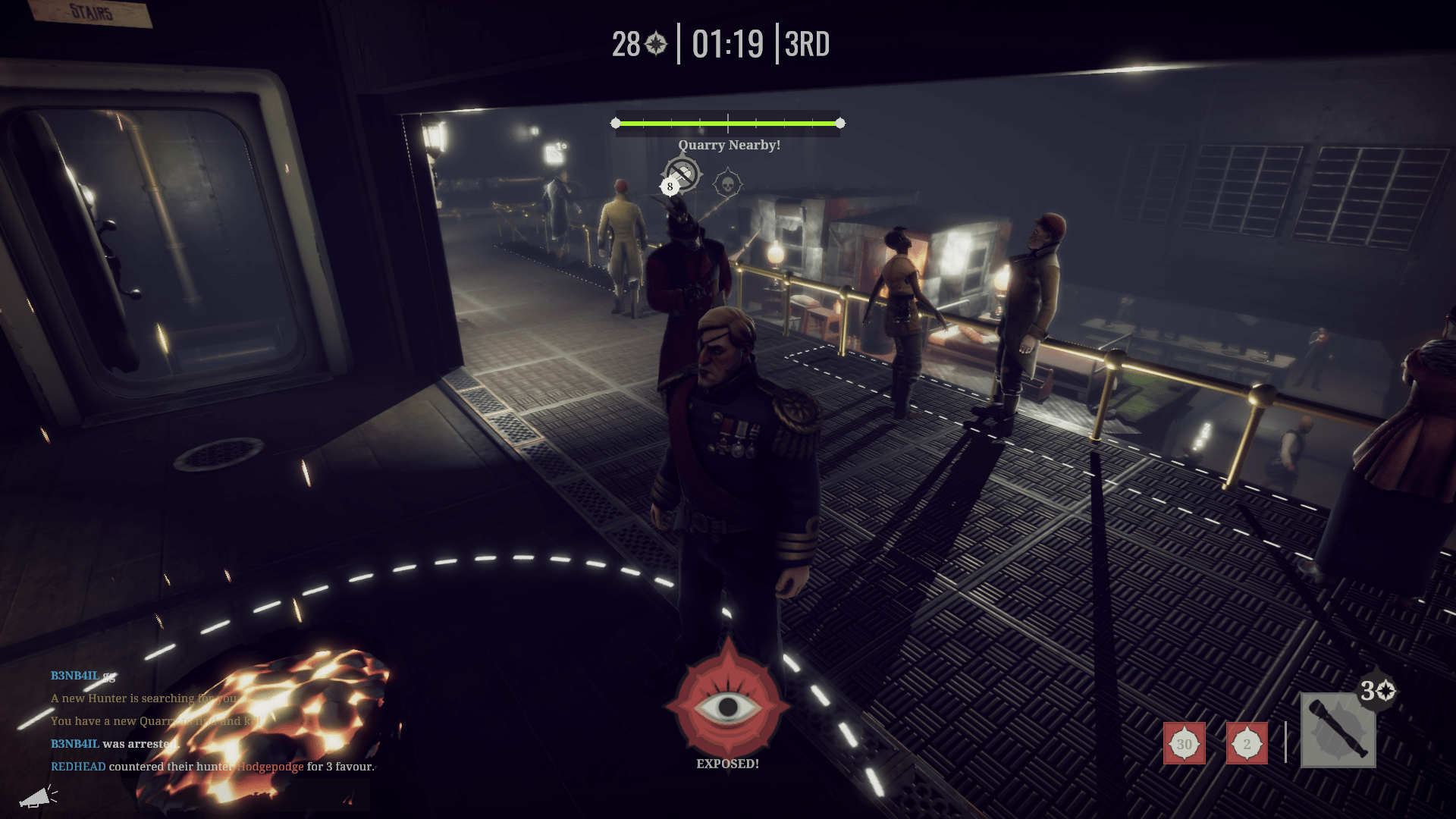 I really adore the soft, velvety textures, and the creamy lighting effects that give the game a wonderfully vintage, victorianesque style. The trouble is though, bugs aside, Murderous Pursuits does appear to be a little bit too easy. It could just be that it’s just an open beta, or it could be that the game is designed to be heavily casual focused. But regardless, once you learn how the Hunter/Quarry alerts work in relation to radius zones, it starts to become an easier game.

I’d say there’s potential to drive the game to more competitive players by allowing removal of the UI and the alerts system to an extent. The voiceover bloke could also be limited to every other kill/fail. Currently, he’s there narrating every death, every kill, arrest, and…well. It does become a bit much after a while. 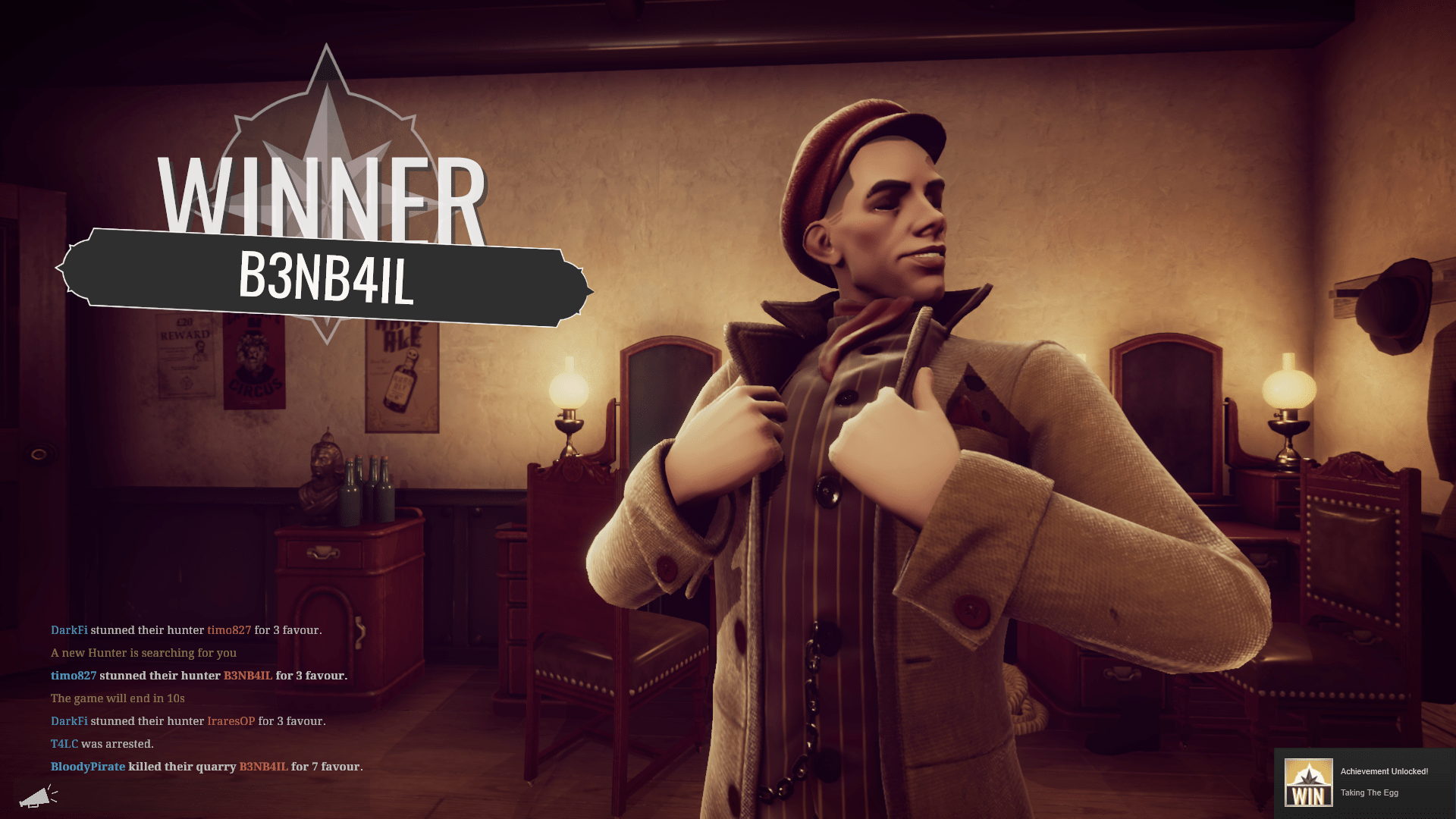 I’m excited to see what the finished game has to offer, and it feels like there is already lots of room for more characters, abilities, and maps. It was a fun weekend experiencing the title, and I’m not too bad…but once again, this was because I learnt how the alert systems work, so they very quickly became my guiding light. Murderous Pursuits is due to arrive on the 26th of April 2018 for PC.