God of War Review – A Calmer Ghost of Sparta? …NOPE

Yes, it’s that time… The Spartan himself, Kratos has returned in his first new adventure for the PS4. He’s no longer happy with tormenting the gods from the Greek Mythos, he now wants to put the Norse gods in their place as well.

God of War from Sony’s Santa Monica Studios is one of, if not THE most anticipated PS4 Exclusive of the year. I know it’s one I’ve personally been looking forward to since it was first announced. Having collected and played every other release multiple times, it was torture when I found out the game was sat patiently at home for me while I was at work (Yes I considered going home sick just to play it… but I’m a model employee so I did my job and kept my Kratos rage at bay!)

As it is always the case with the God of War series, the story starts off with a tragedy to ignite the fire inside the Ghost of Sparta once more. Only this time he brings his son Atreus along for the journey.

My first question was, Does this mean we’re going to see a softer more empathetic side to Kratos? 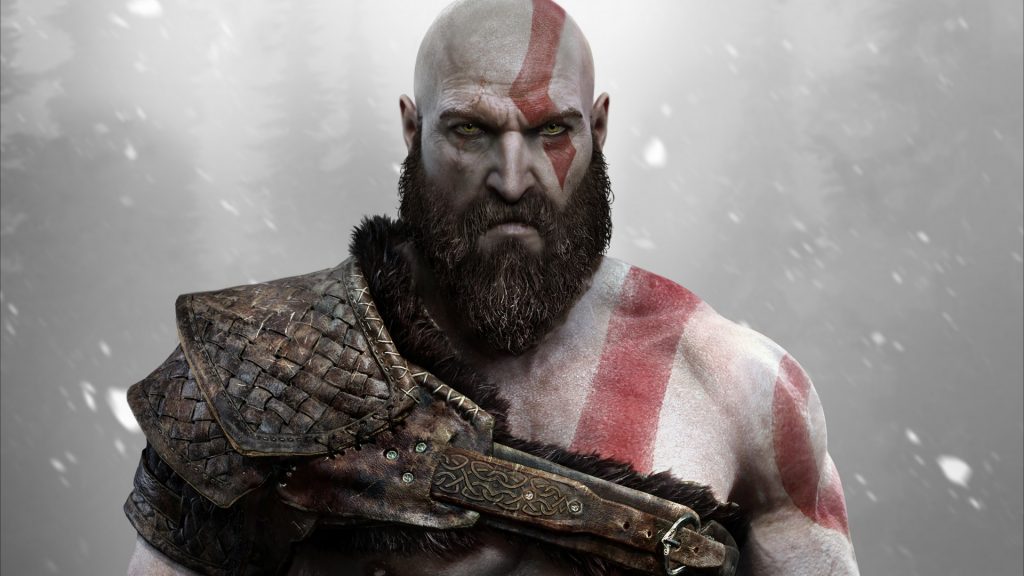 I guess Ghosts do age!

The changes here when compared to the originals (or even Ascension) for me were obvious as soon as I picked up the controller (No unfortunately it wasn’t a Limited Edition God of War Controller). 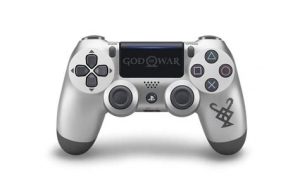 The more modern camera angle (over the shoulder) and the more cinematic approach to how the game and cut scenes transition instantly made it feel a more mature game, like Sony appreciate that it isn’t just Kratos that has aged, so have all his fans. 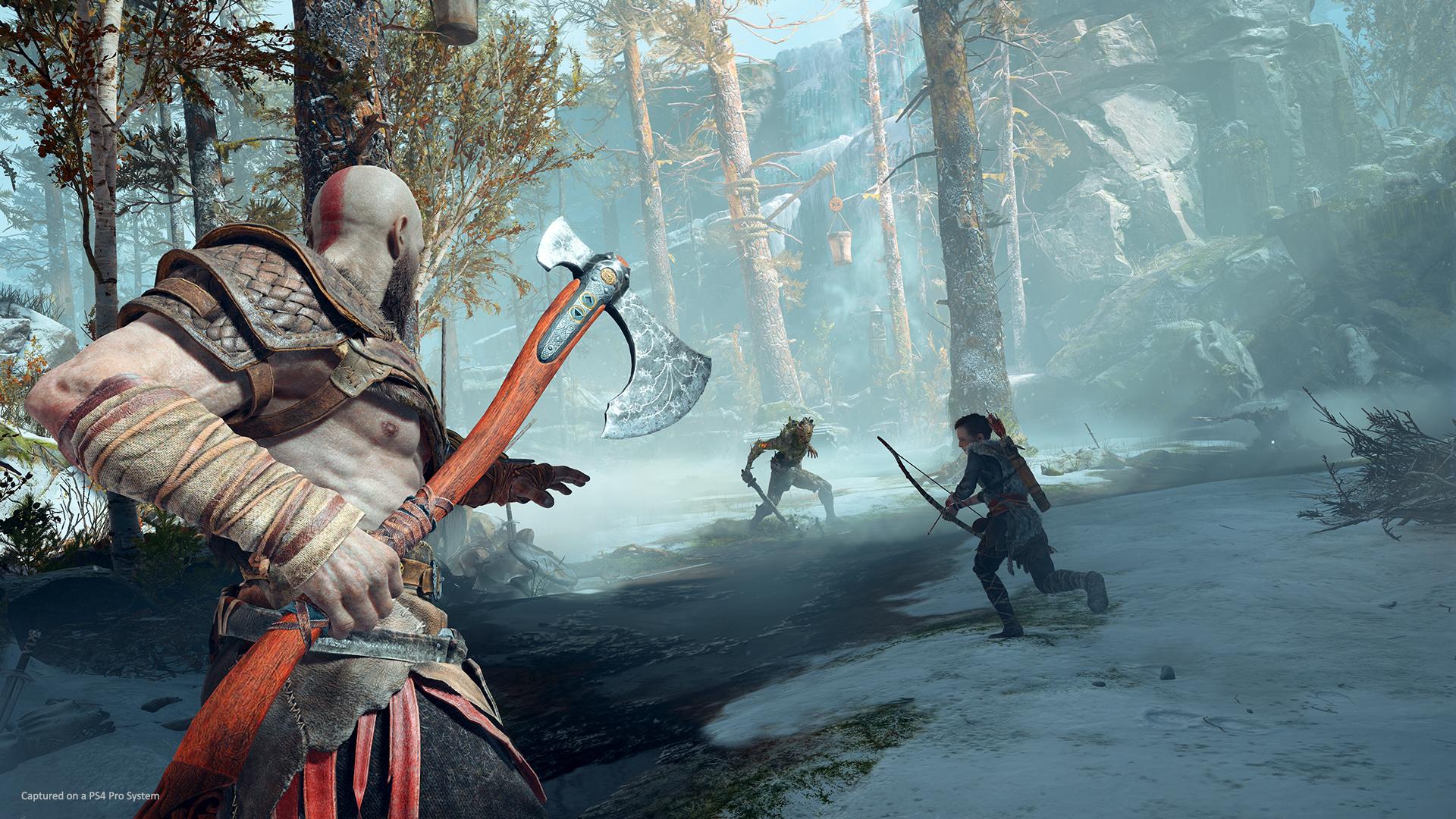 On top of this there is a whole new RPG style upgrade system for both Kratos and Atreus’s Weapons, armour and skills. This can be done either through the menu (in terms of adding enchantment runes to the gear). Or you can upgrade the weapons by Visiting the blacksmiths Brok & Sindri (the brothers that created the Leviathan axe originally).

Note: Broks language when talking to Atreus (a child) is absolutely awful… but I suppose if your father is Kratos then you have bigger problems than some bad language.

Something that took me by surprise here when I saw a lot of the changes was how it still has a fairly linear pathway to travel (at first). Doing its best to keep you on track within the story. After the initial introduction / tutorial section the game becomes a little more open as a sandbox type of world where each place you visit is its own moderately open world, just with a strong indication of where the story wants you to go.

In a similar way to games like Skyrim, as the game switches from the linear tutorial to the open world there is the addition of a compass style visual at the top of the screen with current quests highlighted as a way-point. The main difference is that other items do not appear on this compass as they would in games like Skyrim when you approach.

Another big difference for me then comes after you ‘complete’ an area as it expands and becomes a big open world style game for you to go back and do side quests and obtain all of the collectables. Something worth a note is that the enemies do not re-spawn, once an area is clear that’s it (So no grinding the same spot over and over to become too powerful early on!).

Being honest, from the videos I’d seen I expected it to follow suit with the other AAA titles and just be a large open world with quest icons and items to collect as you go. 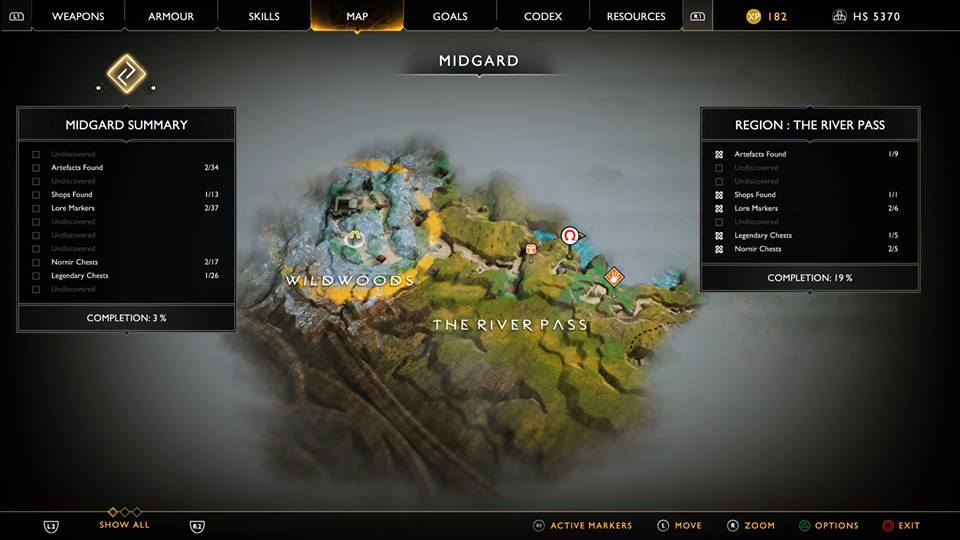 As the world opens up it brings with it more of the Norse Mythology by introducing us to the Bi-frost (Yes the same thing from the Thor movies). Its used as the main way to travel between the nine realms. Speaking of Thor, he makes an appearance (well in statue form and namesake at least) as the story explains his connection to the World Serpent (Yes… The large snake-like creature from the Trailer). 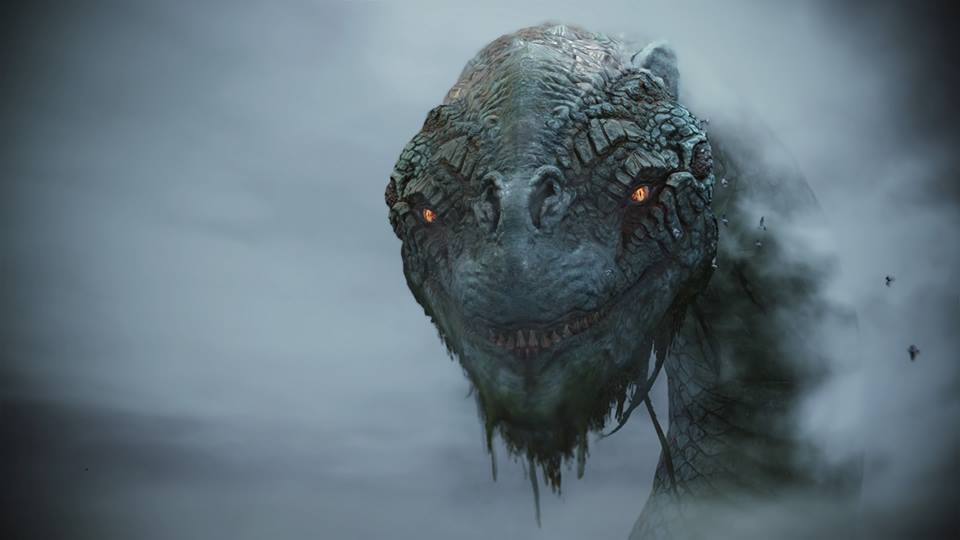 Smile for the Camera!

I’ll avoid going any further into the story as I don’t want to give away any potential spoilers (although I could quite happily talk about this and Norse Mythology all day), but very early on the game indicates how important Atreus will be on this journey as he appears to be the key link between Kratos and him understanding the Norse world around him.

For me Atreus is the dark horse in this game. Kratos has always been the one man wrecking machine with nothing other than his goal to keep him going. Now though he has another person to look out for.

Not to say that Atreus isn’t useful, his Bow and Arrow can be used to keep those pesky hordes of monsters off your back at key moments. So it’s a good idea to keep his equipment up to the same level as Kratos. 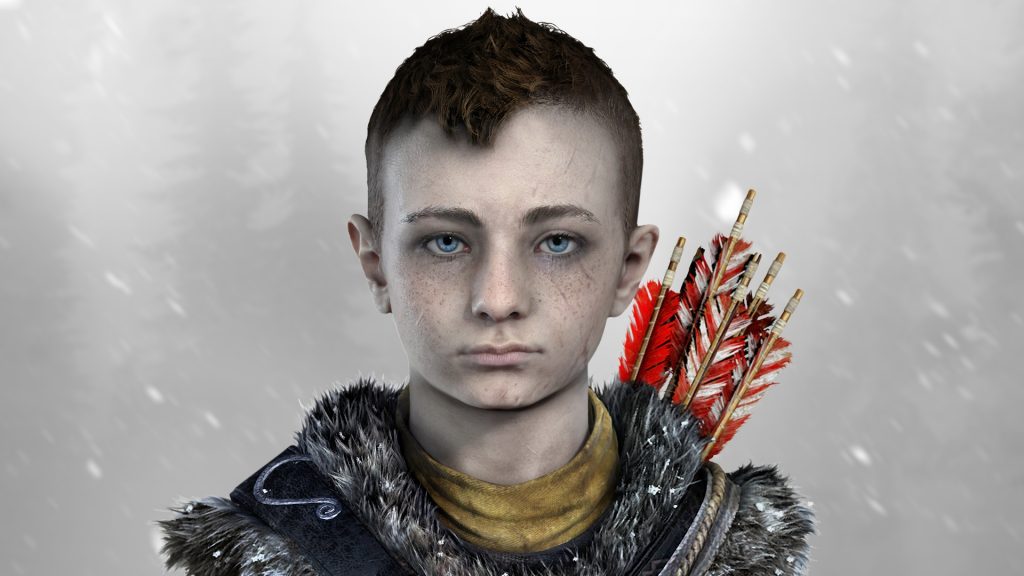 Speaking of the combat, it’s had a big overhaul. Before anyone panics, the frantic hack ‘n’ slash style is still there in leaps and bounds so long time fans have nothing to fear. There is just much more of a thought process involved now. Enemies of different types react differently to certain attacks / abilities and the AI has definitely been improved. I prefer to think of it as this older Kratos thinks before he destroys.

There are still some nice button mashing combos that unlock as you upgrade the weapons, and some of them will definitely remind you of the destruction caused back in the day with the blades of Chaos.

First things first, God of War looks incredible! After having played things like The Witcher, Horizon Zero Dawn etc. that show off amazing landscapes, I was expecting something of high quality, but what I experienced actually made me think the work done here on the landscape and Character models is even better. Ok some of the lesser monsters look a little generic, but they don’t stick around long enough for me to care as long as they explode in a gory mess (which they do). 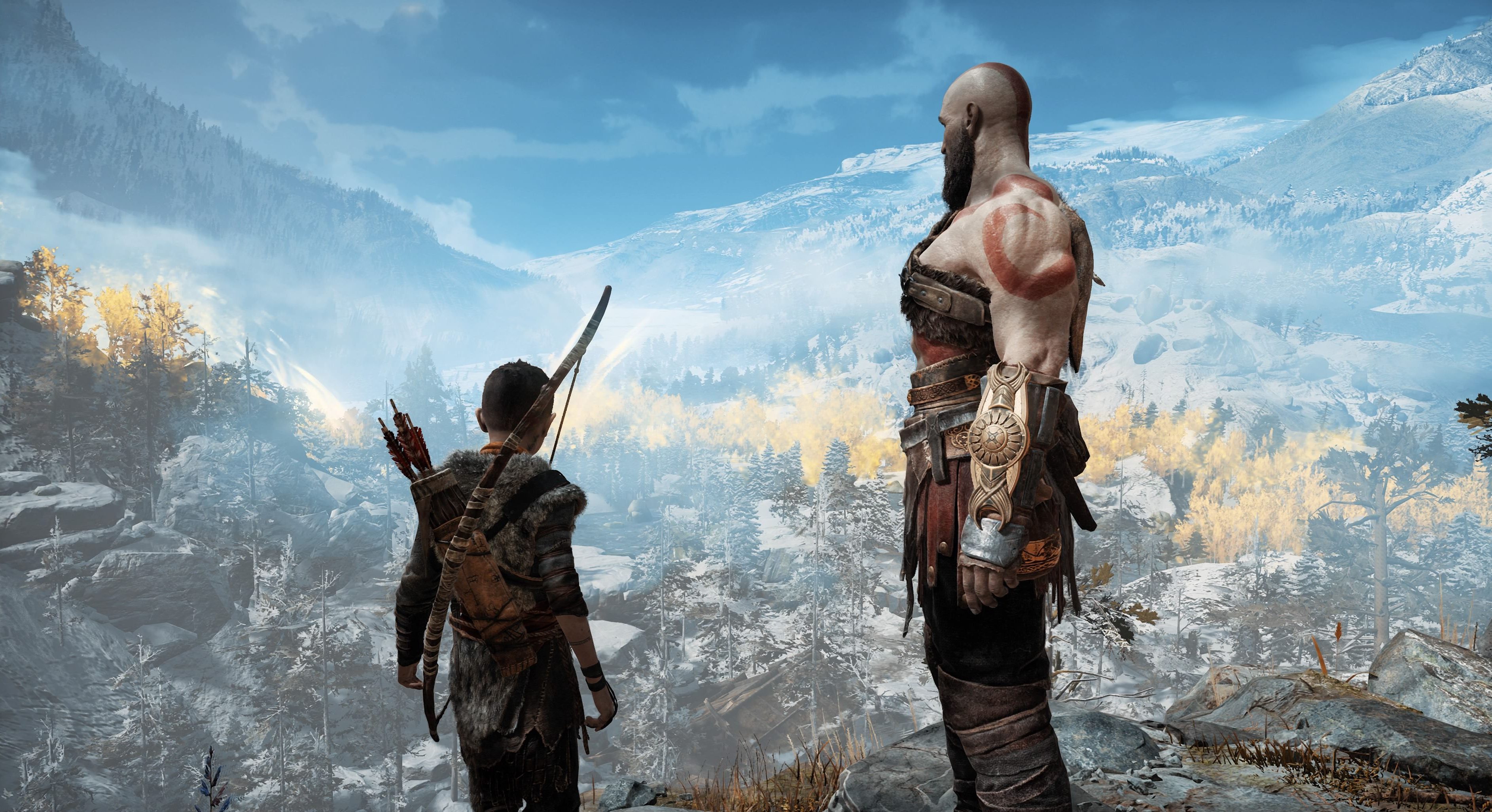 For those of you wanting to know about the gore levels in this ‘more mature’ game. They are just as bloody as ever. At times Kratos is covered in so much blood and lava you can’t see his trademark Red Markings.

One of the things I like to do with large games when judging graphics is write down my thoughts after 1 hour, then 5, then 10 etc. As I like to see if my opinion is based on a wow factor or the initial excitement of playing the game. Or, if it’s genuinely the amazing work done by the developers. Well I can safely say after the 10 hour mark I was still finding some amazing things. I will keep them a secret for now… the surprise is half the fun.

Did I notice any issues here? unfortunately yes a couple. One of which annoyed me a little. The Leviathan axe at times travels right through the item you’re trying to hit as though it’s not even there. I will say that since the update this has reduced in frequency, but it is still there every so often (Damn it Sony.. you were so close to perfection!)

As a fan of the Stargate franchise, it was nice to see Christopher Judge back in the limelight (so to speak) as the voice of Kratos (even if I was a bit late to the party realising who did the voice in this game). It was also a pleasant surprise to see a few other well-known names pop up among the cast. For me this certainly helped to make it more of a story being told than just a basic hack & slash game.

The interaction between Kratos and Atreus is a very nice touch, even though when you’re concentrating on trying to find something you’ll find that parts of these background conversations will pass you by.

It’s easy to see why the soundtrack for God of War has been making the rounds online and being used as publicity for the game, the music is excellent. When I first heard about the soundtrack I had my concerns regarding the amount of music within the game (not being a massive fan of background music, I much prefer to hear the ambient noise of my environment). Here though the music works very well in its job to accent and give atmosphere to key points in the game without being in your face at every turn.

As I mentioned earlier, I have been a fan of this franchise since day one, and I have played all of the titles many many times over the years. I can honestly say this one is going to be no different (providing the Thumb Culture team allow me the time to do it that is…)

The amount of collectables and side quests alone will keep people playing the game far beyond the main story quest, as its impossible to obtain everything in one play-through (certain areas are unreachable when you first arrive).

There are limitations of course, I mean there is only going to be so many times you can hear Kratos say “BOY!” before you want to hit the mute button!

So far I have counted 35 trophies, all of which are obtainable on any difficulty level, So I expect to see a lot of commitment from players to obtain that Platinum trophy! No Excuses. (Something to note: If you don’t want the story spoiled, do not look at the trophy list prior to playing).

God of War was being tipped as potentially the game of the year, and for me they have above and beyond my expectations to reach that target. This game firmly puts Kratos among the most Elite Game Characters (if he wasn’t already there… I’m sure he would fight anyone that disagrees).

The game is both a fresh take on an established franchise while at the same time being loyal to its fans.

Right at the start of the review, I said that God of War was one of the most anticipated releases of the year and it hasn’t disappointed! For me, it’s going to be a massive contender for Game of the Year. I know were only in April, but it’s going to take something special to knock Kratos down.

Without a Doubt God of War deserves a Thumb Culture Platinum Award, it is a must have game for everyone.. Buy it or Kratos will come for you!

Disclaimer: A Disc was not provided for us to do this review – Shame on you for not sharing Sony!!

Don’t forget to check out our Social Media pages guys. Be sure to Subscribe/Like/Follow to keep up to date with all the gaming news and reviews: