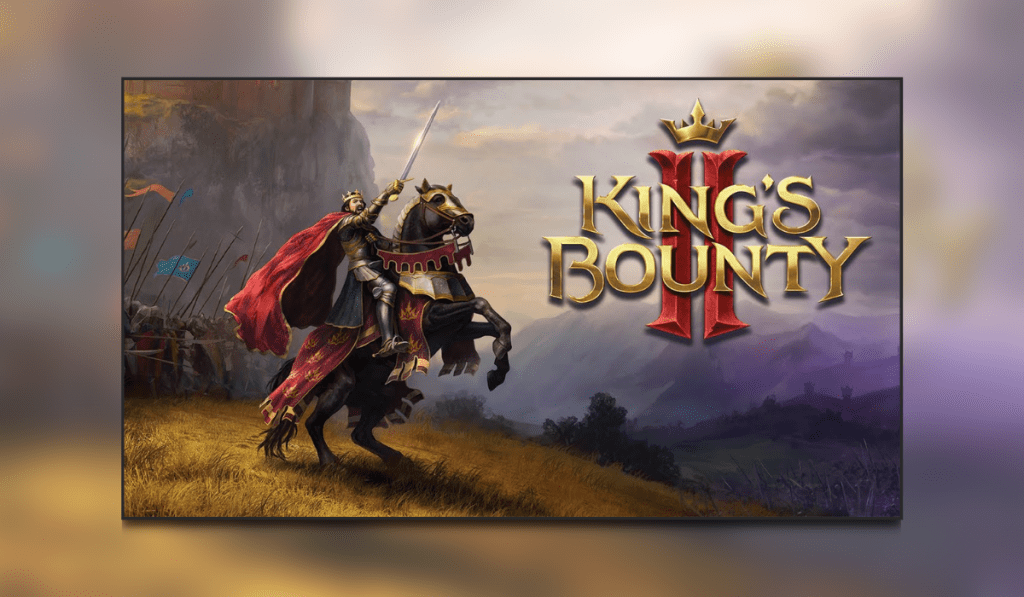 King’s Bounty II is out now on PC, PlayStation 4, Xbox One, and Nintendo Switch. Brought to us by developers 1C Publishing Eu (Ancestors Legacy, IL-2 Sturmovik) and publishers PrimeMatterGG (Kingdom Come: Deliverance, Wasteland 3). King’s Bounty II is an adventure game with tactical roleplaying game elements. I played the Xbox One version of the game on Xbox Series X.

Can we fight our way to glory in King’s Bounty II? or will we fall to our knees at the swords of our foes? Continue reading to find out. If you enjoy this review, please check out my previous here where I played Rustler on the PlayStation 5. Let me know in the comments if you’re going to purchase this game.

When we begin, the game offers us a choice of three characters. We are offered Aivar the warrior, Katharine who is a mage, and Elisa the paladin. Each class offers different skills or talents as they are called in King’s Bounty II. For example, being a warrior Aivar can help ramp his troop’s stats up for battles. He has a +3 on warfare, which is what helps increase your unit damage in battles. The higher the warfare stat, the higher the percentage increase of damage.

We start off the story locked in a prison cell in the dungeon of Fort Crucis in the Albian Highlands, in the Kingdom of Nostria during the age of prosperity in the year 320. We’re informed by a prison guard, Bastian, that we are free to go and that we are going to save the Kingdom. Now that we are free, we must talk to the warden, Valbert, to find out why we have been freed and what we must do next. But of course, being spoiler-free here, I want to move away from the story before I go into it too much and spoil some stuff. I will say, it’s a great story and the game definitely has moments that remind me of games such as The Elderscrolls V Skyrim and Dragon Age.

The game soon introduces us to buying units, and items such as weapons and armour which can help us turn the tide of the battles in our favour. Once you are free to wander the open world, keep your eyes peeled wide open ready to find barrels, crates, boxes, and more for you to loot. These can help you find some valuable items which you can sell to tradespeople which in turn can help fund you to buy more units for your army.

When you are free-roaming the Albian Highlands, you will come across a fair few NPCs that will give you sidequests. Most of these will inevitably end up in a battle. Some of these sidequests can involve you choosing which side you want to take, or, which side you believe more than the other. For example, we have a bunch of Dwarven lumberjacks and some bandit-looking fellas. The choice is yours as to which you want to side with. Just be wary, because it will end up in a fight. You may also earn greater rewards by choosing the correct side, such as more polished gold, or leadership points.

The battles in the game are rather tough, but that doesn’t mean you should give up easily. Just make sure you save your game before entering a fight as you can then reload your save, keeping all of your units from beforehand. You get that pro tip for free. Before entering battles you can also choose which units you take into the fight with you. You can choose up to five units to take into fights. Which five are entirely your choice. You will come across a huge variety of units also, ranging from spearmen, swordsmen, archers, dogs of war, cavalry, healers, skeleton warriors, and much, much more.

Of course, there is a limit on your units other than the five you can choose. This is decided by your leadership points, which you can gain more of as you progress through the game, unlocking more skills etc. Leadership points last for quite a few decent units, but if you go straight for the heavy hitters then this will drain your leadership point count massively. This could then limit you to say only three units for a battle, so make sure you are careful as you may need five units in the battle with you. Even if they’re weaker, this can sometimes pay off. Strength in numbers.

Because I choose to use Katharine the mage, we have access to the Book of Magic. This gives us access to some rather powerful spells during battles. Some of these spells are offensive whilst others are defensive.We have spells that can speed up troops, slow down the enemies, poison enemies, and more. My favourite spell was the Burning Ray which for some reason reminded me of the Hammer of Dawn from the Gears of War franchise. Each spell uses mana, so again, make sure you have enough of this before going into a fight.

This game does require a lot of thinking ahead, you need to ensure you have enough troops for the possibility of a fight that could be around the next bend. So always keep your army and mana topped up. If you have played games similar to the likes of XCOM you will know exactly what I mean. This doesn’t play like an XCOM game though, just similar traits in that you need to make sure you have enough currency to buy units to be able to continue further into the game.

The graphics in King’s Bounty II are surprisingly good considering this is an Xbox One game. It is stated on the Xbox Store page for this game that it is supported on Xbox One and of course Xbox Series X|S. It also states the game supports 4K Ultra HD. The game can look very nice at times, as you can see below. Unfortunately for those of you looking for high frame rates, you won’t see them here on the Xbox Series X. I believe the game is locked to a stable 30fps. There does not appear to be any options to change or unlock the framerate. It’s not the end of the world as you soon adjust to it.

Sometimes though, the graphics are lacklustre. In my below example screenshot, you can see the texture on the Golem is very plain and blurry. This happens on quite a few things through the game, but, it’s not really a deal-breaker, to be honest.

The music in this game is pure bliss to one’s ears. Unless you have a good audio setup, I strongly advise you to use headphones or a headset. The sound effects of the game are very fitting and are of high quality, nice and crisp.

This game will literally last you hundreds of hours. Three characters and a huge story to get through, plus tons of side quests. This one is a game that will certainly keep you busy. Plus the game has a boatload of achievements for you to unlock, should you wish to.

As mentioned in the Graphics & Audio section, the frame rate of the game isn’t the best. But I am sure if you want good frame rates would buy this on PC. The game played well on Xbox, it took me a little while to get used to the control mapping on the game but once I did, King’s Bounty II is most definitely an enjoyable, but tough game. It takes some patience and planning for certain battles, but as long as you go in prepared, you should be okay. I award King’s Bounty II a Thumb Culture Gold Award.