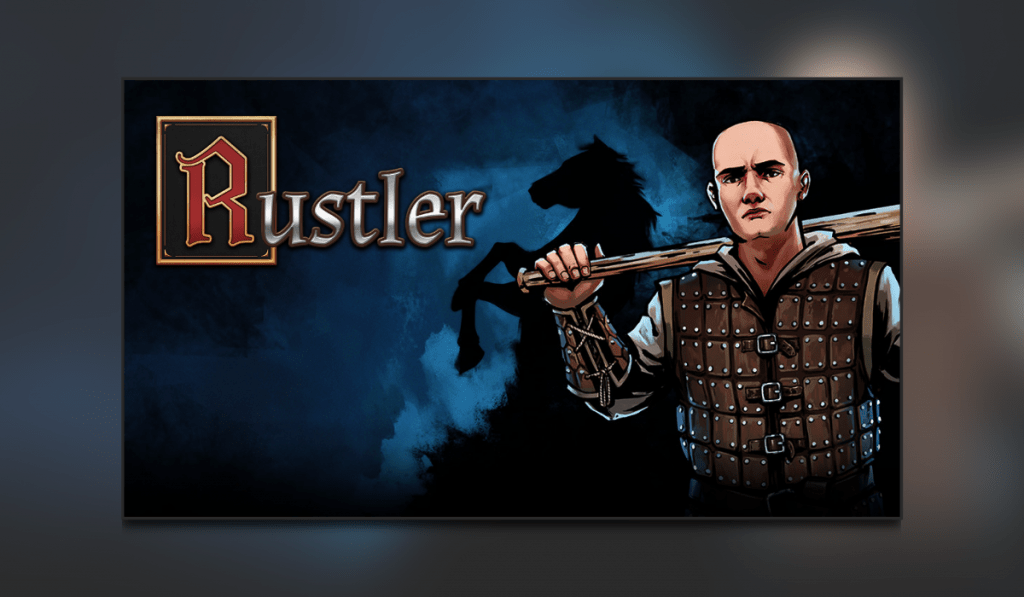 Rustler is a game by developers Jutsu Games (911 Operator, 112 Operator) and publishers Modus (Cris Tales, Super Animal Royale) and Games Operators (Be-A Walker Battle for Eldorado, Natural Instincts). It has been out on the Steam Early Access programme since 18th February 2021. The game is now available on PC via Steam Early Access, PS4, PS5, Nintendo Switch, Xbox One, and Xbox Series X|S. In Rustler we play as Guy, who is just trying to make a living on a day-to-day basis in this GTA 2 inspired top-down medieval open-world adventure game.

I played Rustler on the PlayStation 5. Will it get me into the merry mood of medieval GTA? Or will it leave me wishing I was on the dead body cart? Continue reading to find out. Check out my previous review here where I played KUR, a retro-inspired FPS on PC.

First of all, the introductory full-motion video. It’s hilarious. I recommend you watch it and not skip it as people do. This is a live-action recording of some people doing some random stuff and it’s incredible.

Into the gameplay, we play as a young peasant named Guy. I mean come on, his parents couldn’t even be bothered to give him a proper name. I do apologise in advance if you’re named Guy and reading this review. You may want to question your parents if they had a naming book though. Let me know in the comments if they did.

Guy wakes up after a hard night of drinking with a big black eye. Guy can not quite recall what happened, this then triggers the game to teach us how to control Guy, who apparently has forgotten how to walk. Soon enough, Guy is being bothered by a local peasant who then starts a fight with Guy. Just what you want with a massive hangover! The game then teaches us how to take care of this fella, introducing us to hand-to-hand combat in Rustler. Take note, as this will be very useful in this game.

Food and drink are your best friend after a fight as these restore your health. Soon enough Guy remembers he was supposed to be doing a job for Herb, a local “gangster”. He gives us our first quest, and we must steal a knight’s horse. Once we find and steal the horse, this sets off a wanted alert and puts us on wanted level one. This is where the game has another humorous moment as the guards then make haste and chase you on their horses. Trumpet blazing, lights flashing. Yes, their horse has red and blue flashing lights, it’s absolutely stupid, but brilliant at the same time.

After a few quests for Herb, we are then free to roam around the open world. We can find more quest lines to take on or continue helping Herb. The other quest lines are for groups named the Loan Shark, the Priest, the Knights of the Holy Grail (yes!), and another group which I shall not name. You can find this out for yourself quite easily as the trophy for completing the questline for these is hidden. Of course, I will not spoil that here.

I absolutely love one of the quests for the Knights of the Holy Grail as when you first meet them, you have to take down their guard. This is one reference to a Monty Python movie. On another quest, someone shouts at you “You better stop that before I tell you what your father smells like!”. Again, that’s another Monty Python reference. There are a fair few and they’re brilliant.

Speaking of taking down guards, we have quite a selection of weapons in our arsenal. We have sticks, axes, swords, halberds, crossbows, automatic crossbows, and more! There’s a whole load of weapons to use and master, but the choice of weapon is very much your own. Combat in Rustler is rather simple, which is great as there’s nothing worse than a game that’s fun but has crazy hard combat. We also have the use of shields to help defend Guy when in battles.

After battles and quests, we can earn skill points. These then allow you to upgrade Guy’s skills, damage, amount of health, and so on. It’s a fairly simple skill tree but certainly helps you a bit further down the line.

When you are playing the game and find yourself with a wanted level, there are a few ways to reduce this. You can outrun the guards, tear down wanted posters, or you can even use a “Pimp My Horse” building to have your horse’s colour and armour changed. This tricks the local feds into thinking you’re someone else, just like the spray shops in GTA. You can also earn and find polished gold around the kingdom. You use this currency for a number of things including purchasing food, weapons, and hiring Bards.

Yep, you can hire a Bard. You’ll see these around the kingdom in random areas, most of them playing on their lute. Others beatboxing. It’s hilarious. You may have come to realise that this game is just pure fun to be had.

The graphics in Rustler won’t blow you away considering this is on the PlayStation 5. They’re not bad by any means, just a little rough around the edges. Some of the textures look a little low res, as does some of the foliage. But this is fine in my opinion as you’re not paying triple a prices here. The game ran really well on the PS5 and I did not experience any graphical glitches whilst playing.

The audio in Rustler is fantastic. Beatboxing Bards! Slurring words for voice acting instead of actual voice acting, which is hilarious and not a bad thing problem at all. The sound effects are decent, no complaints here. The music in the game is also pretty decent, I quite like how when you have hired a bard and they’re following you, you can change the song they’re playing with the tap of a button. Or by punching them in the face.

This game can last you hours and hours. You can just hop on, cause some carnage for an hour, and then off again if you wish. However, the story and quests in Rustler, of course, are where it’s at. There is plenty to do as well as hidden horseshoes and musical notes dotted around the rather large map for you to find. As with most PlayStation games, we have trophies to collect. 26 including the platinum, to be exact. In a nutshell, you’re getting quite a lot of bang for the buck here.

Rustler was actually a new one on my radar, I saw it pop up on a site I use regularly for buying video games and wondered what it was. I watched the below trailer and instantly pre-ordered the game. It arrived early which was fantastic as that meant I could get this review out for launch day. This game did not disappoint me one bit. From start to finish it is full of humor, and may even have you laughing out loud in some instances.

I absolutely love some of the Monty Python references chucked into the game, some are not so obvious unless you know about Monty Python and The Holy Grail. I give Rustler the Thumb Culture Gold Award.