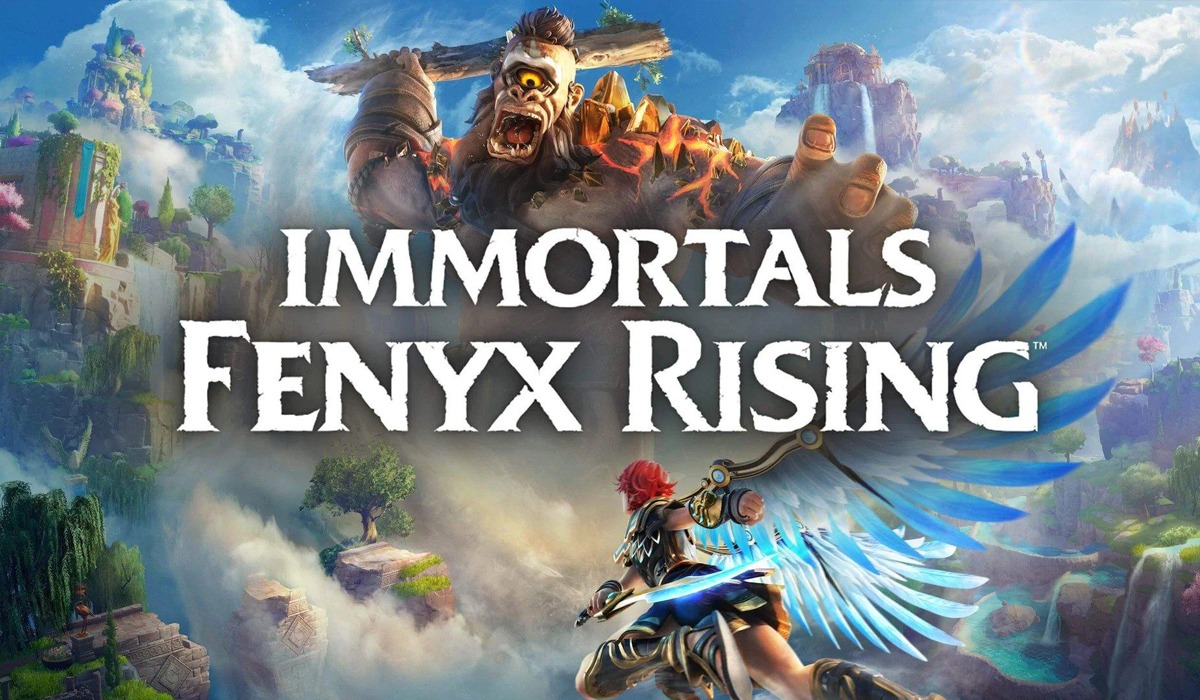 After a strange reveal, under the former name Gods and Monsters. Followed by a delay, we finally have Immortals Fenyx Rising. The game was originally thought up by the crew behind Assassin’s Creed Odyssey with the aim of exploring Greek mythology with greater depth.

The name change was rumoured to be because Monster energy wasn’t happy with the use of the word “Monsters”. Whether there is any truth to that, we’ll likely never know. Having the title as Immortals does, however allow the creators to explore other mythologies in the future which I can see working well.

Immortals Fenyx Rising is an open world adventure game where you play as the titular hero Fenyx. You get to create this character using some basic tools, which ultimately help you make Fenyx your own.

Immortals Fenyx Rising doesn’t fly too close to the sun, but it could certainly get closer…

When Immortals Fenyx Rising was first revealed I thought it looked like a pretty interesting game. Featuring stylised art and puzzles that evoke Zelda, it was hard to not think of Breath of the Wild. Having fallen in love with that game several years ago, it’s hard to believe we’re 3 years on and games are only just starting to show that influence.

I’m a sucker for an open world game, but naturally Ubisoft have a playbook on this and it always makes me a little sceptical. Towers to reveal the map, thousands of collectibles and icons scattered around. But is Immortals Fenyx Rising the exception to the rule? Yes and no. Read on to find out more…

It’s no lie that this game was influenced by Breath of the wild. Even if the developer tried to deny that fact, it’s as plain as day from the visuals to the gameplay design. That being said Immortals Fenyx Rising courses its own path and is unique enough to not feel like a clone.

At first glance you can climb, fight, glide, there are puzzle shrines and a world littered with items for recipes. But each of these mechanics is unique enough to keep you interested. I’ll break down the review into 3 key areas; exploring, combat and puzzles.

From the get go you’re able to see a huge island in front of you. Whilst Immortals Fenyx Rising opens up on just 1 small island, it’s clear there is a rich world to explore. Broken down into 7 unique areas; the prologue, a mysterious mountain on the horizon, the evil volcano-like final area and then 4 sprawling open spaces each with a unique flavour.

As Fenyx you’re able to jump and climb straight away. It’s also not far into the game before you get Daedalus’s famous wings. Whilst the story goes that Icarus of course flew too close to the sun, these wings actually only gift you the power of falling with style. Gliding around with these wings, mixed with a double jump can be quite powerful though and swiftly becomes your main means of traversal.

To tick off the first Ubisoft staple we have statues in each of these regions. Climbing to the top will clear the fog and show you the map. With their only being 7 statues in Immortals Fenyx Rising it doesn’t feel quite as lazy as you’d expect; the last Assassin’s Creed game had about 20 towers in 1 small area. Actually climbing these sculptures is part of the story and will mean the narrator starts to talk about the god in question. This then leads into you being able to see key landmarks from mythology as well as being able to place your own markers and detect secrets as far as you can see.

Immortals Fenyx Rising has a surprisingly robust combat system. It doesn’t have the depth of Dark Souls, but it also isn’t as shallow as most hack and slash games. Your primary and secondary attacks are based on the weapons you have equipped; quick attacks from swords and heavy attacks from axes. These weapons have their own perks depending on what you have unlocked and how you have upgraded them. Heavy attacks also impact a stagger meter on enemies, meaning you’re able to stun them for some free hits.

One thing the game doesn’t tell you though is that each enemy seems to have weakspots. The fact this isn’t explicitly told to you feels satisfying as you start to weigh up each fight and how things may play out. The most obvious are the looming cyclops characters, a double jump with some air attacks on their head increases their stagger meter dramatically.

On top of the basics of sword and bow combat, Immortals Fenyx Rising also has a series of God Powers you can unlock as you progress. Some of these are story dependant and will be required to progress through certain parts of the game, some are specifically used in combat and can be unlocked as you level.

Immortals Fenyx Rising wouldn’t be the game it is with the Vaults of Tartarus. There are a lot of these vaults scattered around, all feature 1 piece of Zeus lightning (used to level up stamina) but also a chest. Some vaults are vastly more complicated than others, and some even feature areas you can’t access without some of the extra skills.

None of these vaults are particularly challenging or complicated, but they’re definitely satisfying. Throwing you into a void without the ability to climb they’re either a puzzle, obstacle course of battle. The puzzles vary from using wind or other elements to manipulate objects, to combinations of targets being hit in a particular order based on clues in the rooms.

Each of the 4 main gods has a puzzle vault related to them as part of their side quests and these are much more varied and teach you ways you can use your skills that you may not have thought of. The mountain area in the north of the Immortals Fenyx Rising map is also basically 1 giant dungeon. At first it seems like you’re uncovering a mountain that you can climb, but it’s structured in such a way that it forces you to corkscrew around it with mandatory puzzles along the way which was a really great change of pace.

Nothing stands out like Eventide Island did in Breath of the Wild. That being said, overall the game is fun to explore and tackle. I’ve not even mentioned mounts, guided arrows or the fact you have a companion for most of your journey – these are things you’ll have to discover on your own.

Immortals Fenyx Rising is a lovely looking game. I know stylised graphics aren’t for everyone; it takes the Breath of the Wild art style and amps it up. There’s a lot of depth to the graphics, in fact the map is very dense in general. Personally I am all in favour of these graphics as it will help the game age gracefully, rather than feel quickly outdated. A few nice touches that add to the word are the lighting and particle effects. Huge bursts of colour and light as huge attacks kick in really add to the feel of the game. One of my favourite effects is that the gods, and god level items, have a constellation effect as they glow.

Also the draw distance is incredible; playing on the Xbox Series X, you’re able to get to the top of a statue or building and see to the edges of the world. You can see every tree, rock, mark collectibles and even see enemies and critters moving around at a distance. Whilst the graphics are stylised, I couldn’t help be in awe at certain points of this game.

From a sound perspective, Immortals Fenyx Rising doesn’t do anything out of the ordinary. The voice acting is a mixed bag of decent or below average but is few and far between enough that it doesn’t cause any grief. The music is solid, but nothing particularly jumped out of the speakers and acted as an ear worm. All the enemy types had a unique enough hook that you’d know who is sneaking up on you, and everything sounded solid and chunky.

Immortals Fenyx Rising is huge! Ok it’s not necessarily as large as Ubisoft’s other flagship games, but it is chunky. Featuring 5 very large map areas, tons of vaults (or shrines) lots of collectibles that actually help you level up, a skill tree and the ability to upgrade your weapons. There’s a lot to do here, you don’t need to 100% the game to complete the story. That being said the more you explore and uncover the easier the later fights will be.

All in all I thought Immortals Fenyx Rising was excellent. Whilst my days of 100%ing games and exploring every square inch of the map are behind me; I happily played through every single mission. Not only that but the nature of how densely populated the map is led me to explore. Finding new armours, weapons and pickups to enhance the game.

I award Immortals Fenyx Rising the Thumb Culture Gold Award. A game that kept coming back for more, with some surprising depth and variety to boot. 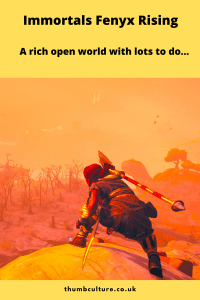