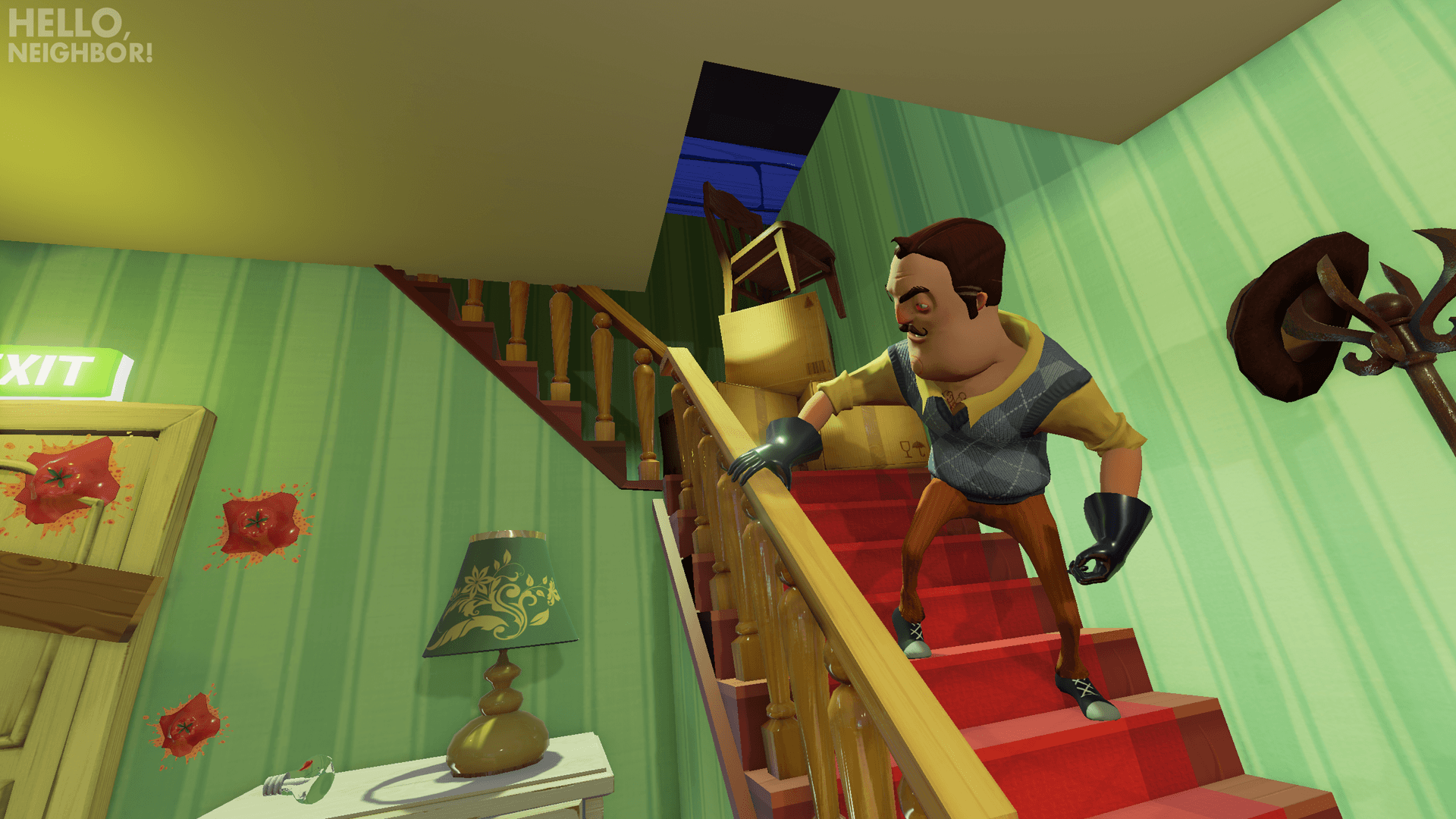 Hello Neighbor is a horror stealth game from Dynamic Pixels and tiny Build and it has just been released on iOS devices and PS4, it could already be played on mobile, PC and Xbox. It is a software survival puzzle game with a really unique style. American spelling aside (neighbour has a U in it and so does colour) I turned off my spell check and got on with reviewing this beautifully weird game.

Hello Neighbor is broken down into acts and in each one the house is very different and increasingly expansive. The game launches with you as a kid in the street who witnesses something strange in his neighbor’s small suburban house. You have to use stealth cunning and puzzle-solving skills to negotiate the map and find out what that nasty neighbor was doing. Get seen or noticed by him and he will chase you around the yard or out of the house and back to a place of safety, so distraction and stealth are in order to succeed.

Hello Neighbor delivers a great dose of tension as you try to solve puzzles while avoiding your patrolling neighbor, when you know he is approaching you can run or hide, usually in a cupboard, until he has passed. Controls are straightforward and lend themselves well to the style of the game which I would describe as “sinister cartoon”. The map is very explorable, but you need to use some serious lateral thinking to traverse the map and reach some of the areas. The puzzles aren’t always obvious and there is a great deal of trial and error required.

The Neighbor has procedural AI, so the more you play, the better he will be able to predict your next move. He will even set traps up to stop you, although that feature can be turned off.
The solution for some puzzles is quite long and sometimes obscure. It can get frustrating. I ran so many laps of this house to keep away from the neighbor that I was close to switching off, but if you persist there is a good sense of achievement in this game and some rewarding gameplay to be had.

The visuals on Hello Neighbor are great, it looks like Tim Burton directed a Pixar movie. When your enemy detects you and gets near, the screen does this great tremor effect which adds to the tension and the suspense is palpable, you feel uncomfortable and stressed when he gets close.

Played on a standard PS4 the game runs well, smooth with no judder. The textured materials represent well and because the map area is quite small, you are either in a house or in the same street, no pop in issues.

The soundtrack to this game is good. The music is catchy and simple, but some of the sound effects when handling items sound a bit flat. However, as the villain approaches and that tremor kicks in the sound effects go into overdrive with this suffocating thrum that makes you feel even more trapped. It’s a great use of atmospheric sound in a game and makes the horror element as good as any other seen in a game. Think Resident Evil 7, imagined by a 7 year old.

The game has a good length, but not much replay value, unless you are looking to speed run or stream it which is where I think this game is pitched. It’s intense and fun to watch. Very few of the puzzles are solved by imagination or lateral thinking and the majority are found by exploration. There is nothing telling you to move that picture, or open that door. You just have to try different variations.
For that reason, streamers will love watching how others did it and the way the game looks and runs will lend itself to that.

I needed walkthroughs to make real progress in Hello Neighbor, however using them did not reduce the enjoyment because it is still a feat to be successful. I liked how the game played and looked, the sound was mixed but overall good. The physics on this game are not great, but you need to exploit that to get past some sections. It is not an easy game, and the feedback loop is massive. Play for an hour and you could get nowhere, open the right door and you’ll fly through the next section.
It’s unique, it looks great and it can be scary. It’s very weird, but accept that and it’s a solid horror stealth game.

Disclaimer: A review code was supplied for us to review this game.

One thought on “Hello Neighbor Review – Horror and stealth in your street.”