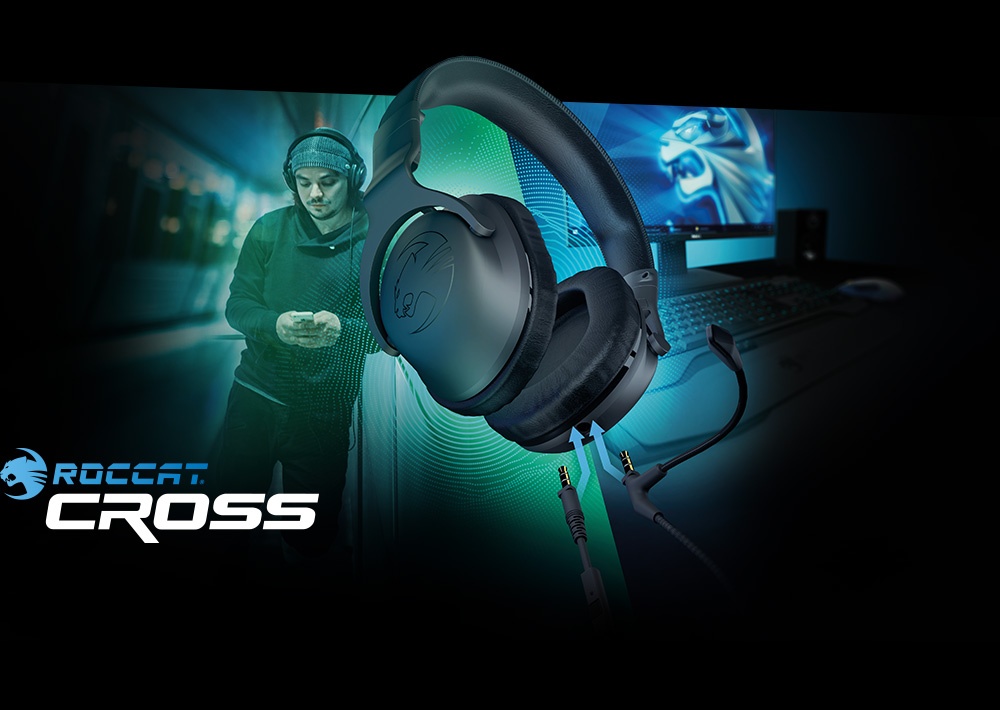 I don’t know about you but over the years I have had a few different gaming machines and being a bit of a family guy with small children I can’t always get to enjoy my gaming in the evening feeling the explosions rippling across my carpet from the subwoofer nor the sounds of gunfire whistling around the room as I may wake them all up!  As a result I have had a fair few headsets over the years and this has also led to the issue of having various types of headset to suit the device I am playing on.

Enter the ROCCAT Cross, a stereo headset that offers multi-platform connectivity between your devices. 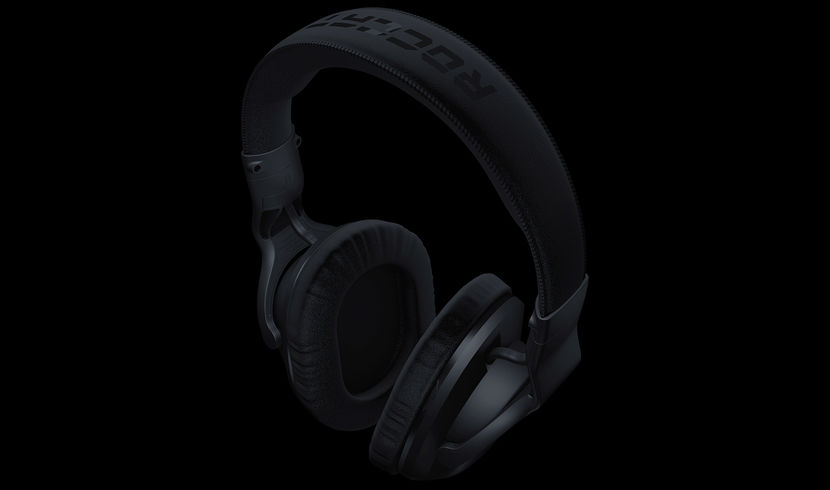 On unboxing the Roccat Cross I was greeted by the headset as seen above along with 2 interchangeable leads and the instruction book.  Of the 2 anti-tangle leads, one featured a 1.2m single 3.5mm stereo jack and an inline mic while the 2nd one had 2 separate mono jacks and a handy boom mic with 2.35m of cable.  The idea of this particular headset is that you can swap between the 2 leads which simply unplug from below the left ear cup to allow the headset to be used not only for PC gaming but also for console and mobile entertainment.  Having a detachable lead also allows for simple replacement should you ever accidentally destroy the lead without the expense of replacing a whole headset. 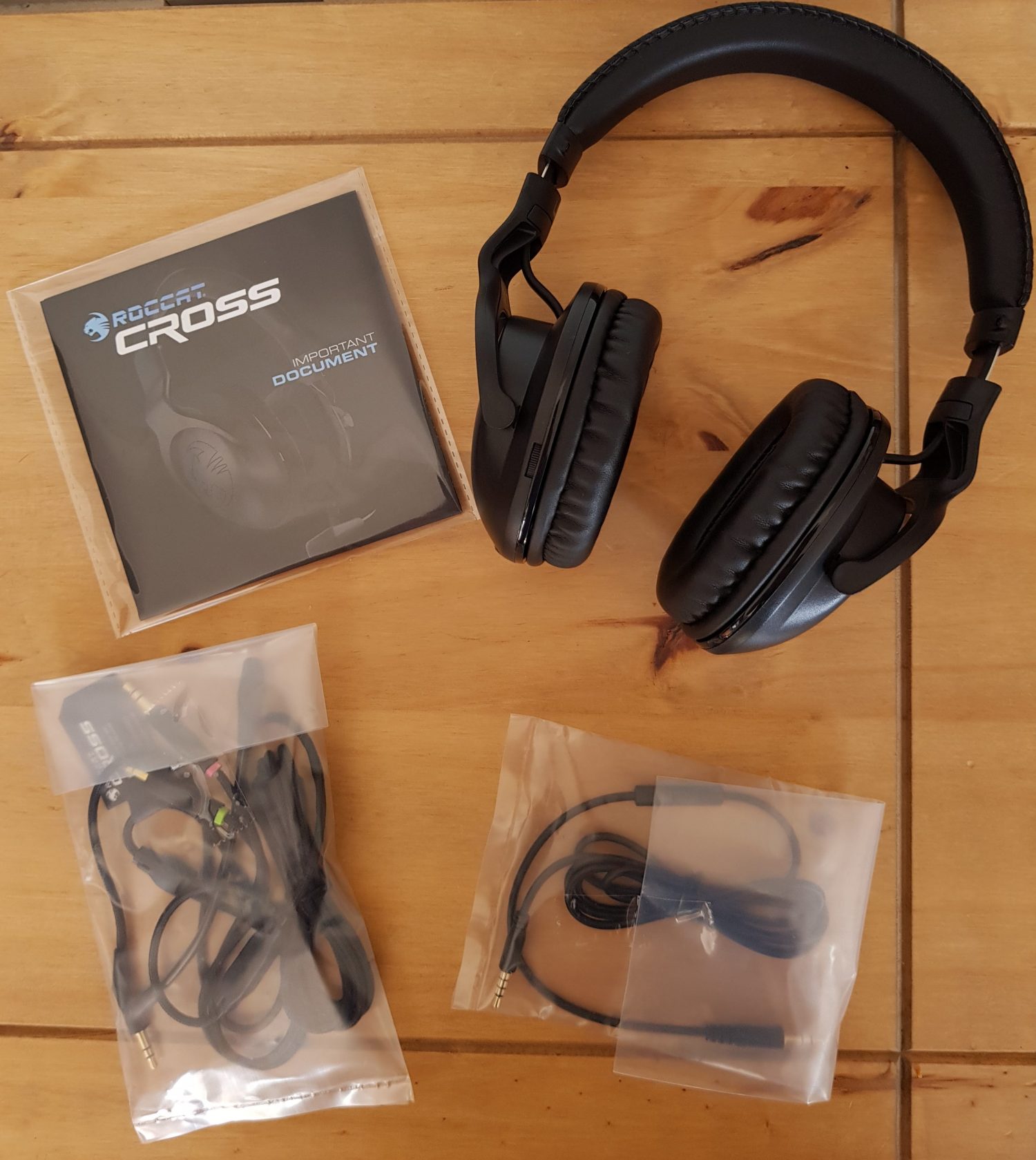 With the clever and fairly simple design of the unit the next thing that surprised me was how ridiculously lightweight the headset was.  In comparison with some of the Turtle Beach’s that I have for the PS4, I could not feel the 185g Roccat Cross headset on my head which was a good thing for those long gaming sessions particularly with the soft memory foam cups but at the same time made me question how great the sound quality would really be.  Was the 50mm neodymium drivers going to perform?

Having initially plugged the Roccat Cross’s into my mobile phone to listen to a bit of Spotify while the wife watched her soaps I was pleasantly surprised by the sound quality as I switched between Muse’s Haarp album and a bit of No Doubt’s Tragic Kingdom.  Having been in and out of recording studios over the years laying down tracks with my bands I can definitely say that the audio response was pretty cool with crisp clear treble and a booming underlying bass.  None of it was overwhelming unlike some headsets which serve to simply blow your brains out, the result being a muddy mess. 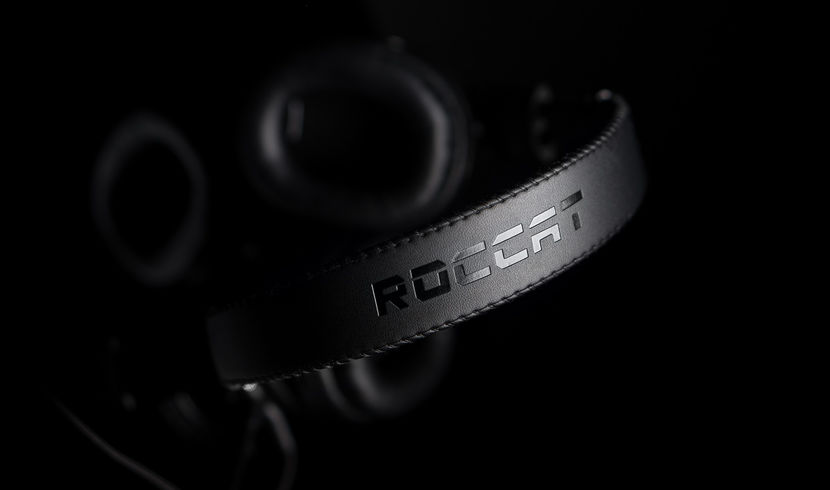 One of the first things that tend to break on a headset is the speaker itself once subjected to a sudden low bass frequency caused by an explosion in a game.  The result of this is a horrible rattly, buzzy speaker that frustrates you when playing and detracts from the game.  Well to test the headset I subjected it to a number of sound samples that I can measure the response from and determine for you whether the Roccat Cross headset can perform as per its specification.

In the spec the performance states that it can handle from 20Hz to 20000Hz, to some of you this is meaningless however this is the frequency range from a low bass to a high treble and is important when listening to audio to aid immersion.  Playing through the samples the low gravely 20Hz performed amazingly well with no signs of any speaker rattle and it felt as if a large lorry was idling it’s engine behind me.  Equally the stated 20000Hz was reached however I had to get one of my children to listen out for the high pitched tone as being 38 years young my natural ability of hearing that range has reduced to 16000Hz!

With the frequency testing passed with flying colours it was onto some console testing whereby I plugged the inline mic lead into the controller of my PS4 Pro and jumped into a chat party with my friends.  Call of Duty WW2 was the game of choice and this offered a great dynamic range of frequencies from the whistle of a glide bomb falling from above to near death grenade explosions.  Through the gameplay the sounds were all clear, footsteps easy to trace and ultimately the mic was clear for all my team to hear.  The handy volume control on the left cup helped to quickly alter the sound level up or down.  It’s a shame that the boom mic is only for the PC connection however the inline mic worked just as well and if anything it prevented me doing that annoying deep breathing thing that someone always ends up doing in the chat party.  The ability to mute the inline mic using a switched button rather than having to hold the button down would have been a better feature however. 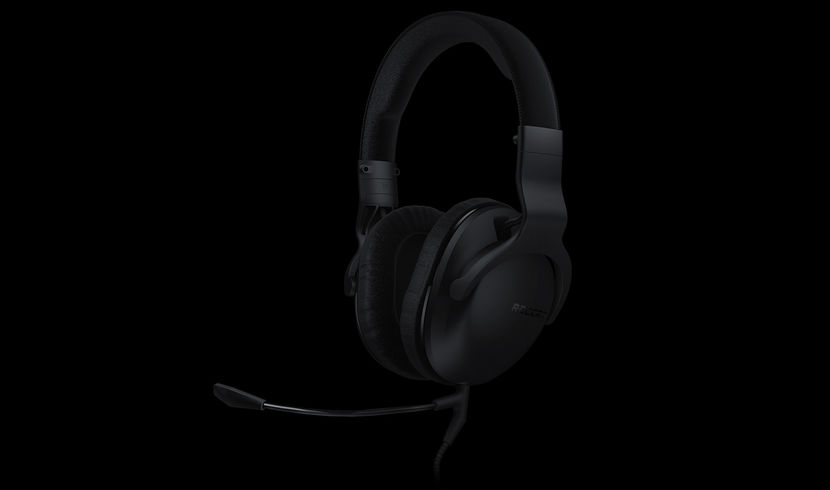 With the boom mic in mind it was onto a session of Settlers 7 on the PC.  The ample amount of cable ensured that I could plug the lead into the back of my machine and sit back comfortably.  The same sound quality greeted me and the bendy boom mic was easy to position and did not flex around as it is fixed to the piece that plugs into the headset which was an innovative touch.  The handy slide button on the lead served to mute the mic while snacking.

So there you have it, the Roccat Cross headset.  An amazing all rounder that will plug into not only your PC but your games console controller (so long as it has a 3.5mm headphone socket) and even your mobile device whereby on iOS you can use the button on the inline mic to take calls, skip tracks and play/pause music and android take and end calls.  Retailing in the UK with an RRP of £64,99 but available for as low as £32.99 at PC World this lightweight, interchangeable headset is a little gem that packs a studio sound punch into your entertainment world.

Disclaimer: A product sample was received in order to perform this review.

One thought on “Roccat Cross Headset Review – Something Like A Phenomenon?”