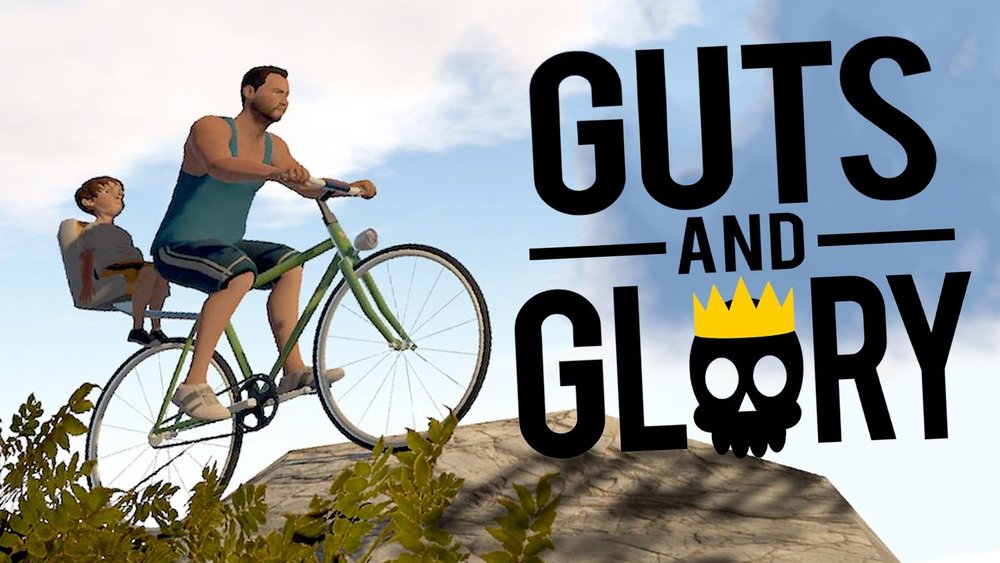 Oh my freakin’ god what have I just played!  Let’s get this said first.  Guts and Glory is certainly not for the faint hearted or those that don’t like the sight of the red stuff.   Blood litters the streets, parts of limbs hang from hooks, my bicycle is in tatters and I am flying through the air after hitting a claymore mine.  Yep it can only be HakJak Production’s gruesome racing/action game Guts and Glory!  Available across all formats and winner of both the IndieDB Editor’s and Player’s Choice award, was I going to find a great game or just some over the top blood bath of a gaming project?

Simply put, Guts and Glory requires you to race your character from one point to another through checkpoints within a makeshift 3D world while avoiding all sorts of everyday hazards such as arrow turrets, spinning chainsaws, disc cutters, claymore mines and even cannons just to name a few.  Inevitably you will get hit by one (or if you’re really unlucky ALL) of the hazards if you do not swerve to dodge them in time or miss time your jump.  The result is limb dismemberment and blood splattering about the place, the severity of your injuries determines whether you can continue on or whether you restart from the previous checkpoint.  With over 70 levels to attempt split across 9 series of challenges, “A Day At The Park” starts at a very basic difficulty and increases to pretty much “death awaits you everywhere” rapidly.  Each challenge series is set in a different environment and features specific characters and vehicles that you can choose to use.  From the deserts of “Happy Valley” to the amazing “Glory Gauntlet”, can you achieve the best time on them all?

There are several different characters to play as, each with their own mode of transport, this adds their own unique style of handling that you need to quickly master.  You start off with John who rides a bicycle with Debra on the child seat attached at the back.  You are taught the simple controls along with the directions to pull off wheelies and stoppies by pulling either backwards or forwards on the left stick of the controller while accelerating or braking.  With the controls under your belt the traps start to make an entrance.  The poor lady on the back of the bicycle acts as a moving target as everything seemingly hits her despite your sweeps to the left and right to avoid the obstacles.  The 100% ragdoll mechanics are so morbid but hilarious at the same time.  Feet go missing, arms severe off until she cannot hold on anymore and falls off the back of the bike in a crumpled heap.  Fairly ruthlessly the level doesn’t end if she falls off, they only care about you really!  Oh and riding a bike with one leg is possible!!

Other characters that feature are Earl and his quad bike, the Yang family with their open top car, Jack and Jill with their bike and trailer combo and also the fantastically named Lawn Chair Larry who gets about in a propane powered wheelchair/rocket.  The ultimate character to unlock is Junior who is the small child that accompanies John on the back of his bike, however you will need to complete all the levels to unlock him.  Like I said earlier, it isn’t for the faint hearted and you need a sick sense of humour to be able to play it!  Guts and Glory is insanely funny but at the same time very frustrating at times.  You are guaranteed that nearly every cause of your level ending prematurely will result in a pool of blood and a body hanging from a piece of scenery in a B-movie horror style way.

The “Glory Gauntlet” challenge series features an amazing homage to the game “Frogger” where you need to traverse a wide road of passing traffic before navigating over an equally wide river with floating logs.  Thankfully there is a checkpoint halfway through however it will definitely take you a few times to get the timings right and no doubt some swearing from you along the way!

Guts and Glory is about the ragdoll physics of the characters and how they react to the various devices that are out there trying to injure, mame and kill them.  The outcome is a lot of the red stuff splattered on and across as much of the scenery as possible along with their respectful limbs that have been affected.  The graphics aren’t the best in the world however the animation is slick and the way the characters and vehicles move is what makes the game crazilly fun.  I did come across the odd graphical glitch while playing on the PS4 Pro whereby on occasion the blood trail from a fallen character produced a polygon that was stretched between a piece of scenery and their body.  It wasn’t the end of the world however and did not deter from the actual gameplay.

The soundtrack is bright and punchy with a mixture of electric guitars wailing all the way to Spanish vibes depending on the location that you are running the gauntlet through.  The characters and innocent bystanders do call out at times but mainly scream to be fair.  The sound effects have been well thought through with the squirts and drips of blood being amplified through your speakers as you once again hang your character by the eyeball on that rusty nail once more.

Guts and Glory will keep you playing for a while, and to be honest it is probably most enjoyable when playing with a crowd of similar minded people all laughing and cheering at the various methods of death that they are witnessing.  On your own, playing through the levels is funny for a while however your frustrations of trying to reach a particular checkpoint on a level combined with the initial novelty of the game does mean that the fun slowly wears off after a while.

Guts and Glory is a gruesome, disgusting and shocking game to play, but oh so hilarious at the same time!  If you can stomach the sight of blood and don’t mind subjecting the poor characters to all manner of death and dismemberment in unique ways then this is a game you need in your collection!

I award Guts and Glory the Thumb Culture Silver Trophy!

Disclaimer: A review code was received in order to write this article.  Many people were hurt, and worse, in the process.