Disco Elysium is an open-world RPG developed and published by London-based Estonian studio ZA/UM and was released for PC via Steam on October 15, 2019.  Disco Elysium has been having rave reviews since its release, with the likes of PC Gamer calling it – “An irresponsibly deep detective RPG that lets you be any kind of detective you want. Even a bad one” – 92/100. Let’s jump on in.

Disco Elysium is set in a fictional city of Revachol and is plagued by crime and poverty.  Here you take the role of a detective who starts his day waking up from a horrendous hangover after a night fueled by alcohol & drugs. You discover that you have no memory of who you are, where you are, even what you do for a living and it takes a bit of time after leaving your hostel room and after talking to a few of the cities folk that you discover you’ve actually been sent there to investigate a murder case. One tip, try not to get yourself murdered in the first minute by the ceiling fan in your room haha. 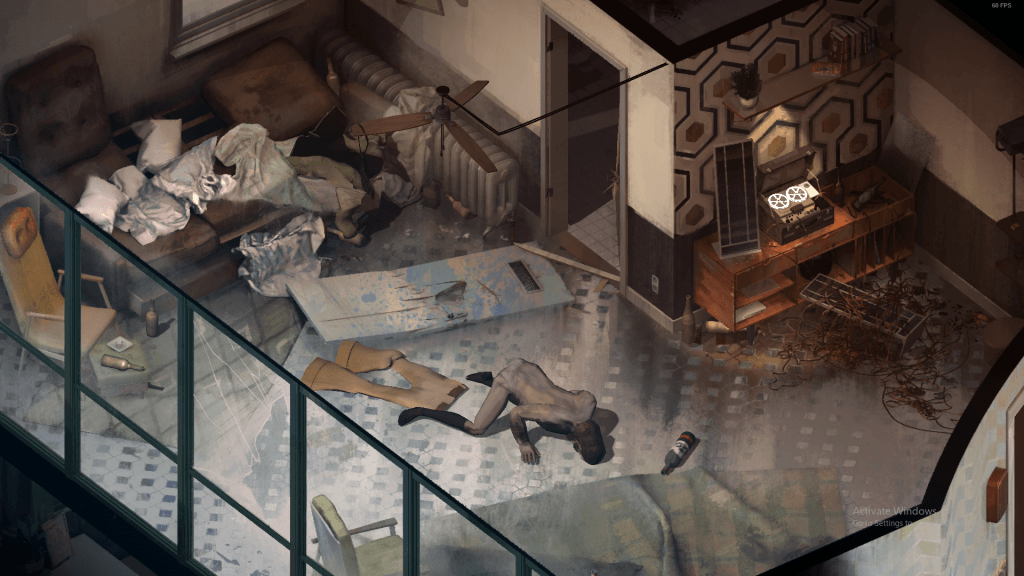 The case you are involved in is concerning a body that was found hanging from a tree behind the hostel that you actually awake from, and you need to find out what the hell has happened. It’s up to you how you go about your detective work across Revachol, visiting various locations and interrogating unforgettable partially-voiced characters across the city.  With the help of your partner Lt. Kitsuragi, you slowly start to grasp at bits of information throughout your day that is both key to your investigation and a lot that’s not even useful in the slightest. The game is dictated by no combat, but on skill checks, dialogue & conversations with characters which controls your personality. You have to be careful with what you say as people will remember things, and as you are given lots of ways to respond, these dictate how Revachol react to you, and the outcomes of your quests.

Let’s take a few steps back, as right off the bat you first decide on the kind of detective you want to be, with 3 options to choose from – “Intelligent”, “Sensitive” & “Bruiser”. Whichever of these you choose it will determine your character’s stats. For example, if you choose “Intelligent” then you automatically know when you wake up that you are in the city of Revachol as some of your knowledge has stayed in your brain etc. We now move onto the four primary abilities that your character has in the game which are “Intellect”, “Psyche”, “Physique” and “Motorics”. Each ability contains 6 skills (totaling 24) that you can upgrade which provide their own rewards. These skills include “Endurance” – which improves your health that allows you to endure things like taking drugs, or drinking alcohol for longer, because if you eventually run out of health you will die. “Encyclopedia” – allows you to recall tiny bits of trivia that may or may not relevant to the case. “Empathy” – enables you to feel what others are feeling, and to warn you when something more is going on. I have highlighted a few skills here but there are many more you can choose from. Each of these skills gives you a voice in your head that is highlighted in Disco Elysium’s dialogue system during the many conversations you partake in. 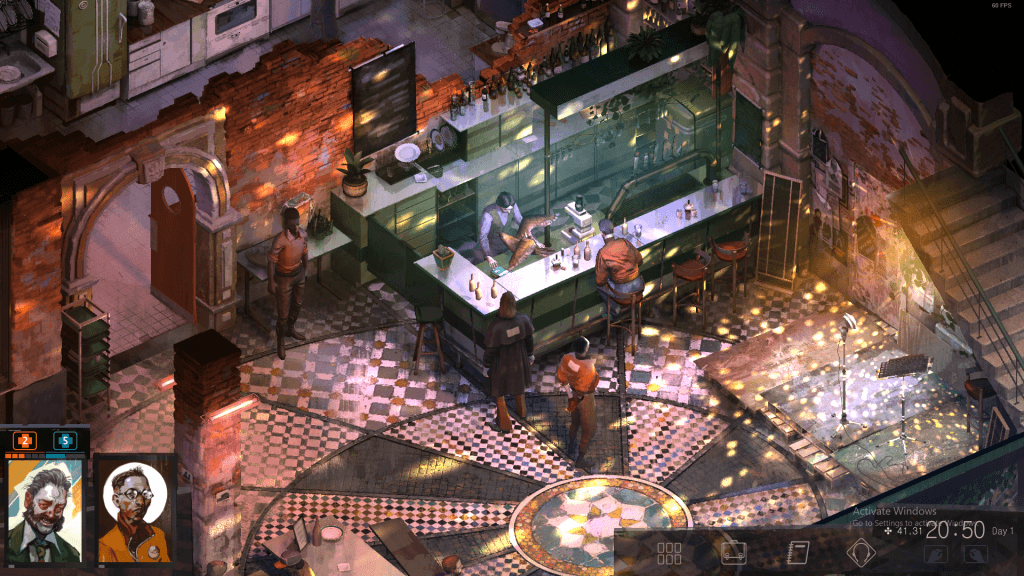 You can carve your own style & mindset for your character, with 80 items of clothing to find, 14 tools to use from guns to torches, you can either continue your way down the path of a drug user & alcoholic, as there are many you can take in Disco Elysium, or by trying to turn your life around and conquering your demons by going sober and not listening to bad thoughts in your head.

I thought the art style of Disco Elysium was very nice. The game has a dark look to it with dark shadows scattered around Revachol and black puddles in a lot of areas, but there are some bits of snow to mix things up. You can’t see the sky in-game but you can safely assume that it looks like one of those horrible looking days full of dark grey clouds ready to rain down on you at any minute, those kind of depressing days where you just want to stay at home. Both the landscape and characters have almost like a painting effect style to them which I really liked. 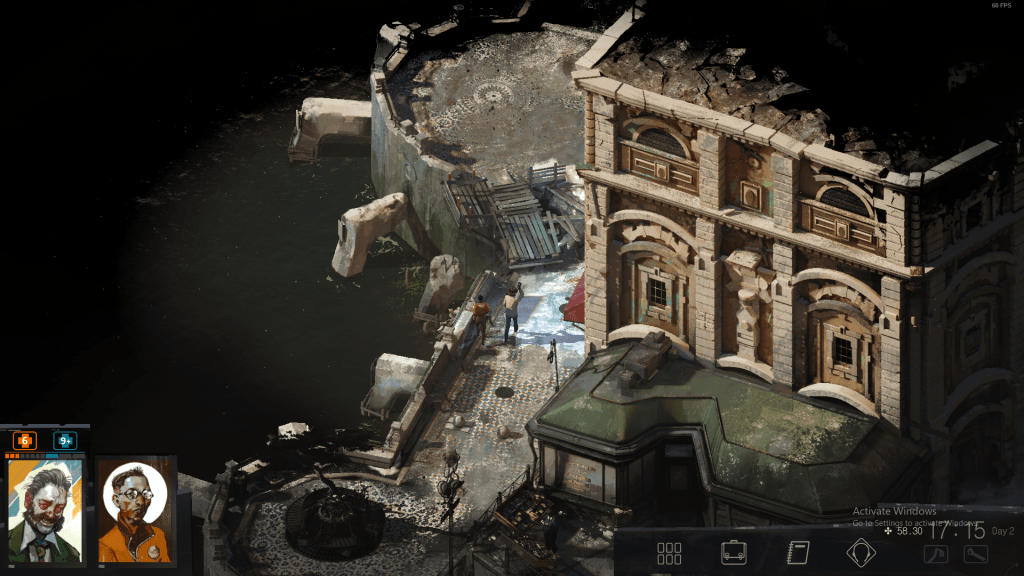 The audio in Disco Elysium really compliments the look & feel of the game and even though it sounds quite simple, it’s very intricate. The game comprises of English indie-rock band British Sea Power who are involved with the main soundtrack, and the rest of the sounds comprises of voice acting, interactions with characters & various parts of the city. 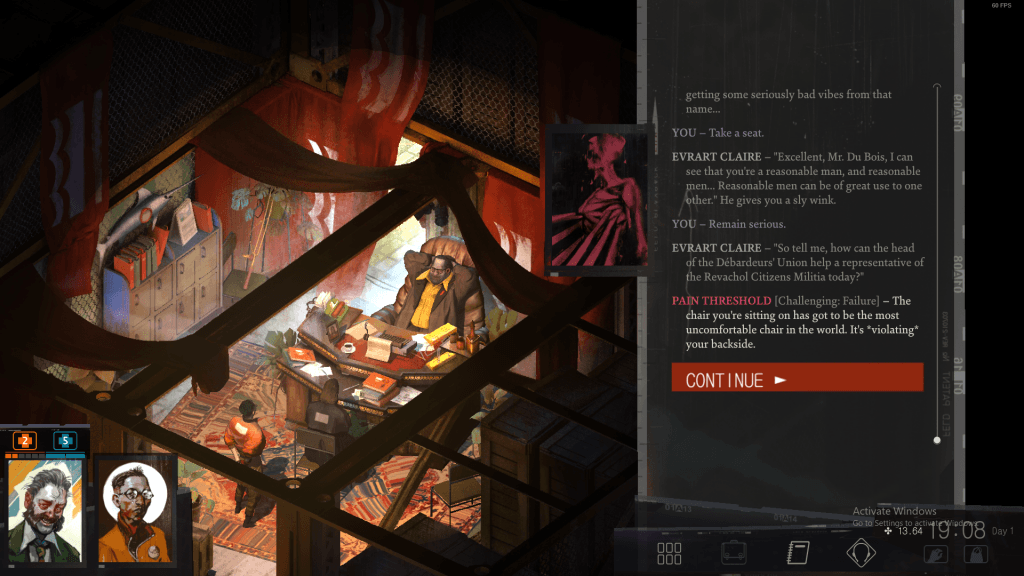 It’s fair to say Disco Elysium is a huge game. The designer Robert Kurvitz stated that “It takes 60+ hours of continuous playtime to finish if you’re a reasonable completionist player, 90 hours if you’re absolutely savoring every detail and 30 hours if you’re rushing it”. So it’s up to you how you decide which way you go about regarding the length of time, for me I’d say I am in between the 30 hour and 60 marks. I think it’s safe to say if I was absolutely in love with Disco Elysium, then I would probably be closer to the 90 hour mark. Obviously, once you complete the game there is the option to dive straight in again and this time choose a different path maybe, but are you really wanting to play again after already spending 60+ hours of the game? I am not sure. 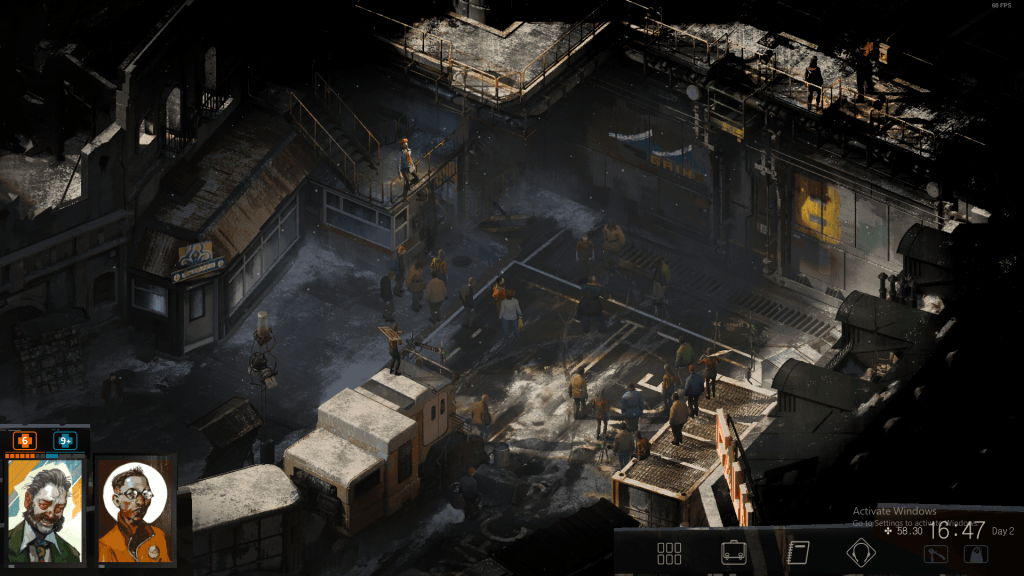 I fairly enjoyed Disco Elysium. Don’t get me wrong, it’s a very impressive game in its deep approach to role-playing but I found it extremely text-heavy and with no combat, was for me at times quite mundane. Disco Elysium is a very well written RPG, with deep conversations and an intriguing city that will make you want to make sure you are constantly on top of all things regarding your investigation. Whether that be talking and then re-talking to characters to see if you’ve unlocked some new dialogue to extend the investigation, or whether you’re constantly roaming around Revachol making sure you haven’t missed out on any new areas to look into, I just felt it was a lot of slow grinding and to bridge that with a bit of an un-motivating story, it didn’t keep me wanting to play all the time.  Politics play a huge part in the story and I kind of got the feeling that as we have enough politics in the world right now what with BREXIT, that having it within Disco Elysium it’s got on my nerves a little. I am making Disco Elysium sound like a chore of a game, but I was, for the most part, enjoying it.  Disco Elysium is currently £34.99 on Steam.

I am awarding Disco Elysium a Thumb Culture Silver Award!