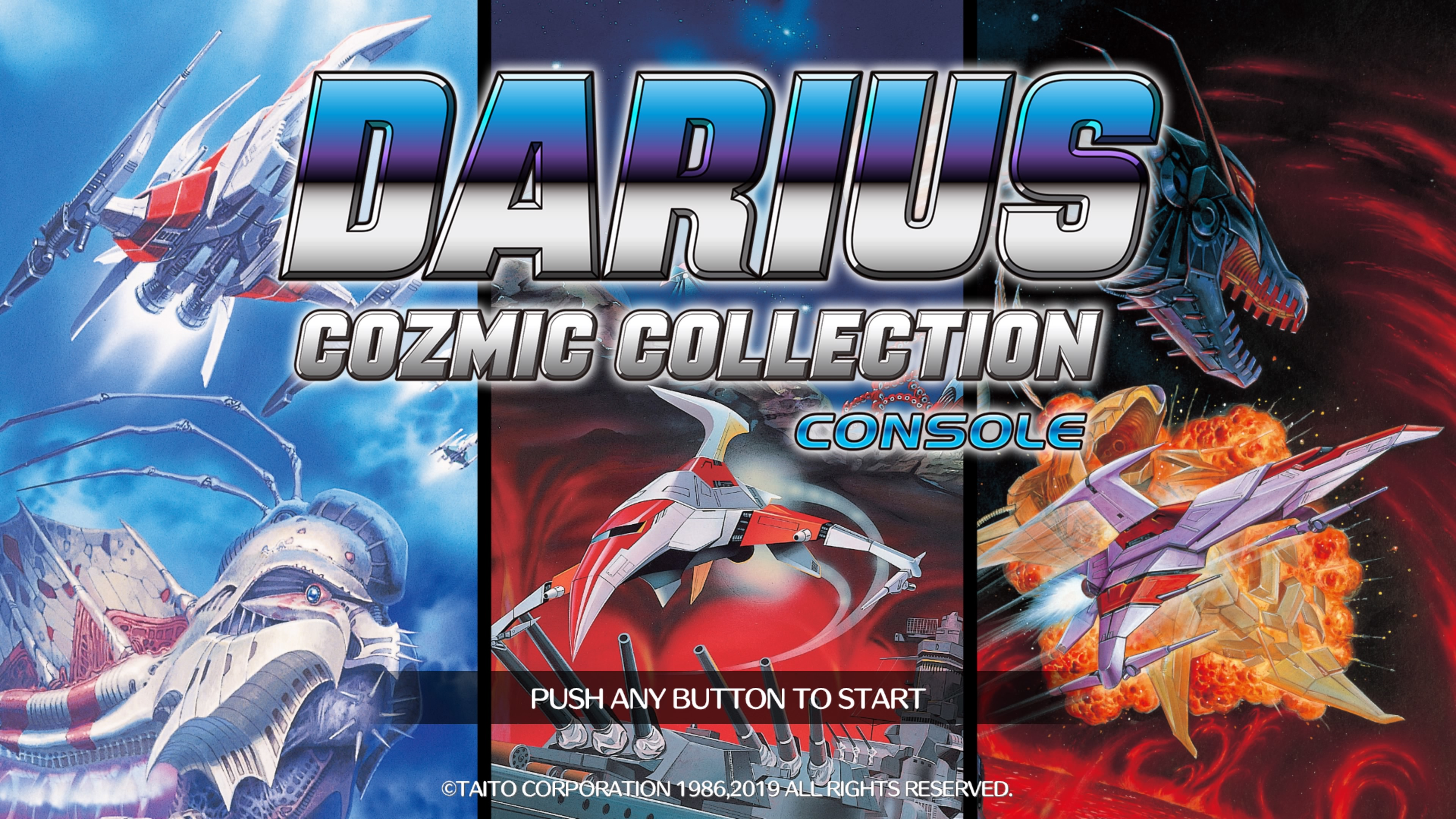 In the current generation of gaming, we are no stranger to a remaster or a remake of previously popular games. This isn’t too dissimilar from the early days, where companies would port their popular arcade games (remember those?) to home consoles to bring the experience into your bedroom and milk you for some more of your hard-earned pocket money. Some of those coin-op conversions were a little bit, shall we say…shaky (I’m looking at you Pac-Man for the Atari 2600). Thankfully, Darius is not one of those game series.

Darius started life out as your typical coin guzzling side-scrolling shoot ‘em up developed and published by Taito in 1987, but what set this apart from regular “shmups” was the non-linear level design and multiple endings (if you ever got there). The Darius Cozmic Collection Console edition is a collection of 9 games, which is actually 6 different games across several consoles including their localised variants. Once again it is Published by Taito, the same Taito who brought us Space Invaders and Arkanoid and developed by M2 who worked on some of the original ports and more recently with Sega Ages to bring Sega games to your mobile phone.

So as mentioned before, we have 9 games to play. Darius II (Mega Drive), Sagaia (Genesis – The American release of Darius II), Sagaia (Master System), Darius Twin (Super Famicom), Darius Twin (Super Nintendo), Darius Force (Super Famicom), Super Nova (Super Nintendo – the western release of Darius Force), Darius α (PC Engine) and Darius Plus (PC Engine). All of these are easily accessible on the games selection which will offer a little history on each game.

This is an excellent collection of shmups from and era where the genre was king, and Taito wore the crown. If you played these games in the early ’90s then you know what to expect. You essentially fly through the various environments of the planet Darius, using missiles, bombs or lasers to take down enemies and mini-bosses until you reach the end boss. Power-ups can only be obtained if you destroy groups of enemies, rather than randomly dropped as is so common in games of this genre. You will see a lot of game over screens, and that’s not just my age speaking…it was hard then, and it is hard now, my advice would be to obtain the shield power up as quickly as possible because without that it is unlikely you will reach the end of stage one on any of the games. Oddly enough, when I did (eventually) reach the end of a stage, I found the bosses a lot more forgiving than the actual journey to take down whichever dinosaur, fish or bacteria you were destined to face.

Things can be made easier with certain “cheats” enabled but it is still no walk in the park. Back in the old days, we could have rapid-fire controllers where instead of pressing the button once to blast your cannon, you can hold the button and it will just fire continuously for you supposedly making the game a lot easier. So with that addition and the ability to change the frequency of your shots, it can be made easier and I would recommend people new to the genre to maybe start with that, though be warned, it still won’t be a walk in the park. One feature I think this game could do with would be a feature. New players may be put off by the fact that after 30 minutes of gruelling gameplay…it truly is game over! Though the quick save can be a lifesaver so make sure you use it often!

As these are direct ports of the console versions, it comes with all the bells and whistles of the original games including your standard game, 2 player, time attack and boss rush modes spread out over the various games. The jewel in the crown is Darius α, a game released in 1990 that pretty much no one got to place as it was never made for sale, but were only able to be obtained through a campaign for people who bought Darius Plus and only 800 people were able to get a copy!

The graphics serve as an aide-mémoire of how far gaming has come since 1990, and if you were raised into gaming at that time, it is a reminder of how we used our imaginations to make the game! Everything has been remastered in its pixelated 16-bit and 8-bit glory. The master system was a late entry in the system’s life span and shows how far you could push an older system.

By default, the screen will display in the aspect ratio of the original version. There are other options such as pixel-perfect, fit to screen which scales the image to its maximum length or width and then fullscreen for those who like the image completely stretched across the whole of your TV. You can choose whether you would like the background border to be there or not, smooth out the pixels, but to get the most authentic experience you can turn scanlines on to emulate that of the good old CRT screens.

The effects and music in this game are an instant throwback to the burgeoning noises from the arcades when you would go down after school (or during in some cases) with your mates and just pump in as much money as you could. It transports you to a time before the massive orchestral scores and the epic soundtracks we have now, a time where a single programmer or composer would work on the music to emulate the desired atmosphere, something this series often did quite capably with some of the music akin to that of French electronic music composer Jean-Michel Jarre who was very prominent in the late ’70s an 80’s. Due to some hardware limitations of the time, some of the original music was only able to be played in mono but thanks to the power of evolution, all effects and music have been perfectly restored in glorious stereo sound.

This boils down to personality more than anything. If you enjoy retro games and Dark Souls, then this might be the collection you are looking for. If you’re NOT ok with dying ten times and seeing 3 games over screens in 5 minutes, then maybe give this a miss. If you like a challenge there is a lot of fun to be had here, the levels of elation you feel when you past stage 1 of any of the 9 games are probably comparable to that of actually beating a game. There is a sense of achievement that is not to be ignored and with the number of stages per game, you could spend a lot of time on it.

It’s unforgiving, it’s relentless…but man it’s fun! There is a lot of love here for the classic shmup with a plethora of superb bosses, memorable soundtracks and variety of modes. It showcases some of the best games not just from the Darius gameography, but some of the finest games from the 16-bit era. While this serves as a definitive love letter to an era that builds me and many others as a gamer, I fear that its high price point might not be able the pull in much of a new audience and it could do with a little additional padding with some extras like detailed histories or original concept art.