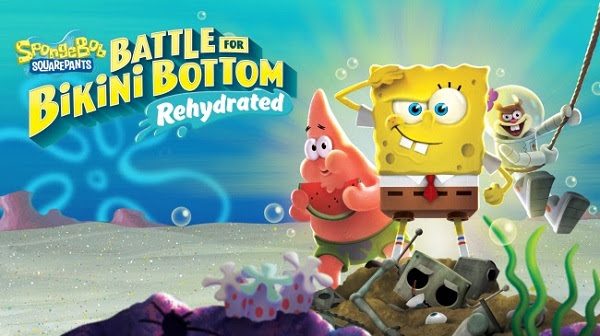 SpongeBob SquarePants: Battle for Bikini Bottom, originally released way back in 2003, was that rare beast; a licensed title which delivered both in terms of quality and adherence to the source material. The colourful 3D platformer brought over everything which was great about the first three seasons of SpongeBob, including the various exotic undersea locales and the crazy characters which inhabit them. In spite of mixed reviews from the critics, fans were besotted, and it sold so well that it was added to the classic ranges for Gamecube, Xbox and PS2. Publisher THQ Nordic is in the business of fishing up quality properties from yesteryear, and they are now ready to unleash Purple Lamp Studios port (hoho), SpongeBob SquarePants: The Battle for Bikini Bottom – Re-hydrated upon the world. Is it a pile of codswallop on an old boot or a splodge of gaming caviar on a nice bit of toast? Let’s take a deep dive and find out…

There are no two ways about it, if SpongeBob Squarepants: Battle for Bikini Bottom – Re-hydrated were a stick of seaside rock it would have “classic 3D platformer” running through its core, with all the positives and negatives that entails. You initially play as SpongeBob himself, who is tasked with cleansing his neighbourhood of a plague of robots who have popped up due to the machinations of the villainous Plankton.

As is typical with classic-era 3D platformers, you make progress by collecting glittering MacGuffins. This time around the prized objects are golden spatulas rather than stars or jigsaw pieces. Each level is gated off, and to reach the end game you’ll have to locate the majority of these impressive implements. True to the genre, there are a number of other collectables but the majority of these ultimately just equal more spatulas. Boo.

So yes, SpongeBob must explore each under-sea shantytown and complete various missions to fill his suspiciously angular trousers with beautiful burger-flippers. Missions usually revolve around either defeating bosses, finding hard to reach places, collecting a certain number of items or, in the case of the Sand Mountain level, completing various time trial races. These races add a nice break from hopping from platform to platform.

An issue I had was that I sometimes didn’t get a concrete sense that a level was finished. Levels are linear to a degree, and some culminate in boss battles, but there is a number where reaching the end simply deposits you back at the entrance a few spatulas heavier, which can feel a bit anti-climactic.

Of course, the robots aren’t going to let you run around picking up polished pan-scrapers without a fight. Luckily SpongeBob can unlock an arsenal of attacks with which to combat the robotic rotters, most of which involve bubbles. See an enemy hovering at the end of a ramp? Why not wang a bubble bowling ball in its general direction!

As you progress you unlock the ability to inhabit the bodies of Patrick the Starfish and Sandy the Squirrel. Each character has unique abilities which make them essential for certain parts of the game. SpongeBob has the widest variety of attacks and can tip-toe during sections where stealth is required. Patrick has the ability to pick up and throw items to trigger switches or freeze water. Sandy can hover and attack using her lasso and can also swing from grappling hooks. Sometimes an NPC will only offer a mission if you approach them as the right character so you can’t play favourites.

SpongeBob and friends can absorb a number of hits before going down, and the robots are not particularly challenging in themselves. However, in conjunction with the small platforms and tricky jumps which populate most of the levels they find ways to be a real pain in the backside. Thankfully falling off a ledge or falling victim to a mechanical mischief-maker only typically results in your being re-spawned at a nearby checkpoint. In most instances switches, you have flipped and platforms you have moved remain in their altered state, though death resets progress on some missions which involve destroying or moving certain items.

I found the level design to be decent on the whole, although the confusing layout of some areas feels the very early 2000s. As mentioned previously, most levels are made up of small platforms at various elevations, and navigating can be frustrating and disorienting. Added to this is the game’s approach to stopping you escaping the playable area. If you go out of bounds a large digitised hand drags you off the screen and places you somewhere nearby after a loading screen. The problem is that some areas and platforms appear to be accessible, and it’s quite annoying to jump for them only to be dragged away and put down somewhere else.

SpongeBob SquarePants: The Battle for Bikini Bottom – Re-hydrated is pretty slick otherwise, and the characters feel tight to control. It’s also quite impressive how much content from the series the original developers managed to include, and it’s not hard to see why fans were so bowled over. It’s great fun to explore SpongeBob’s legendary pineapple-under-sea or The Krusty Krab.

Besides the usual cosmetic improvements SpongeBob SquarePants: The Battle for Bikini Bottom – Re-hydrated doesn’t add much to the original game. However, in addition to the main story mode, there is also a multi-player horde mode which revolves around defeating waves of robotic enemies. There’s a light competitive focus, with the goal being to collect more shiny objects than your partners while defeating a robotic Squidward (who, disappointingly, you never directly interact with). You can play as characters who are not playable in the main game such as Mr Krabs, although the character balancing is a little off. Squidward can use his clarinet as a machine gun, meaning he can quickly blitz robots before melee-based characters can get to them, rendering the competitive element feeling a bit half-baked. This mode is a nice diversion but doesn’t offer much challenge, given that you respawn after death. Once you have finished the last wave there isn’t really a reason to return. I also noticed significant frame-rate drops during this mode due to a large number of (often exploding) enemies on screen.

It must be said that if you’re not a fan of SpongeBob SquarePants the humour might start to grate and feel self-consciously wacky. Expect constant scatological references and non-sequiturs. Most gags are predictable and references to movies such as Terminator, Apocalypse Now and Scarface feel very dated in 2020 (also how is “Say hello to my little bubble friend” even a clever gag?). True to the show, SpongeBob is clueless and air-headed, and this can make it hard to connect with him as the main character. The stakes feel pretty low, even for a 3D platform game where the story usually takes a back-seat.

SpongeBob Squarepants: The Battle for Bikini Bottom – Re-hydrated looks lovely. The clarity of the visuals is massively improved over the original release, and the colours are richer and more vibrant too. Each character looks like a spot-on 3D recreation of their TV show counterpart. Purple Lamp Studios have done a fantastic job of updating the game for modern consoles.

The levels are as varied as is realistically possible given the under the sea setting, featuring kelp forests, haunted ship graveyards and even a world set in the dreams of the main characters. Bosses are typically mechanical versions of SpongeBob regulars and along with the robot enemies, look loads better in the new release.

The graphics are not without flaws. Assets tend to load in as cut-scenes play. More frustrating is that your shadow, which is essential for knowing where you’re going to land during platforming segments, can sometimes disappear. The camera is awkward too, and can sometimes be difficult to position during tricky sections.

SpongeBob Squarepants: The Battle for Bikini Bottom – Re-hydrated has a great surf rock sound-track which includes a fair bit of music from the show. Some tracks are quite short and outstay their welcome on longer levels but there’s no denying the quality of the compositions and instrumentation.

The voice work is also great, with original voice actor Tom Kenny bringing the polygonal version of SpongeBob to life. Voice clips following one of the main characters collecting an item or encountering enemies play a BIT too often but it makes the experience a bit more lively at least.

SpongeBob SquarePants: The Battle for Bikini Bottom – Re-hydrated offers 9 levels are a bunch of boss fights. Each level is pretty sizeable with multiple sections and will take a while to fully explore. The story will most likely take most players between 10 and 15 hours to complete. There isn’t a lot to do once you’re finished, other than to mop up the collectables you missed. There is a theatre which can be unlocked with 40000 shiny things but honestly it’s not worth the grind. Nor is there much of a reward for collecting all the spatulas. Shame.

SpongeBob SquarePants: The Battle for Bikini Bottom – Re-hydrated is a lovely remake of a slightly old-fashioned game. There are better 3D platformers out there, though maybe not with the SpongeBob license. The fact is that if you have fond memories of the original this game is sure to give you warm, slightly moist feelings most of us don’t understand. I give a silver spatul… er… Thumb Culture award!