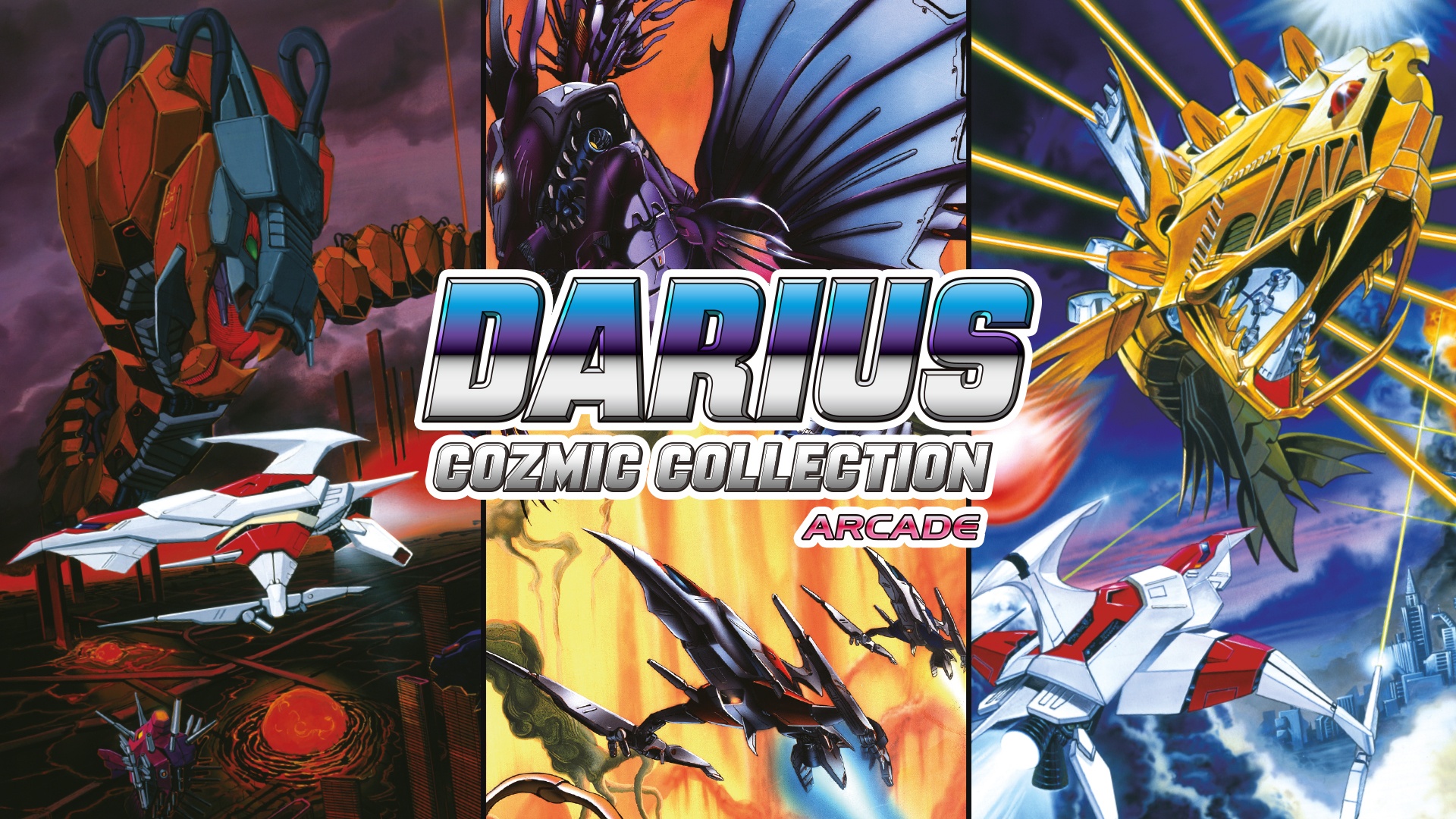 The Darius Cozmic Collection Arcade features a series of arcade releases of the immensely popular shoot-em-up franchise. Often touted as one of the pioneers of the genre, Darius was unique in that its cabinets used three screens to create a longer visual range on which to play the game. Having a triple screen set up made for a very wide and eye-catching cabinet. Unfortunately, my local arcade growing up didn’t have the funds to acquire such a machine. First released in 1987 by Taito Corporation, Darius set a high standard for Shmups(Shoot-Em-Ups). This is the second of two collections released for the Darius Franchise. I’m taking a look at the collection of Arcade releases on the Playstation 4, whereas the review for the Console collection can be found Here.

In these games, the players’ ship scrolls horizontally while being attacked by various vehicles and alien creatures. You’ve got to have great reflexes to be able to dodge the enemy’s bullets and hit them with your own. Certain special coloured enemies will drop powerups when you kill them, allowing you to upgrade your shot, bombs, or energy shield. If you can manage to make it past the levels, you’re thrown into a boss battle against an enormous opponent who can take a lot of hits and dish out a tonne of shots to dodge around. Defeat the boss, and you get to choose between which zone to proceed through next. There are 28 zones in total, but you can only play through 7 of them in a single play-through.

Later games add some slightly different elements, like Darius Gaiden adding a big bomb that’ll wipe all enemies and bullets on screen, but for the most part, the gameplay stays the same. The different release versions of the game included in this collection feature some minor changes, altering difficulty in several different ways, so it’s up to the player to find the version best suited to them.

People who know me, know I have a soft spot for 16 and 32-bit games. the Darius Cozmic Collection Arcade capitalizes on this. Darius Gaiden has some of the nicest looking sprites I’ve ever seen. Highly detailed levels can look pretty chaotic and add to the difficulty of navigating through obstacles and enemies. Each of the games features a high amount of detail and uses resolutions that are true to the cabinets. Each game features various visual options to tweak how each game looks including scanlines, CRT emulation, smoothing (Gross. Pixel smoothing should be illegal on old games.), Or you can just play the pixel-perfect representation of the series.

Darius and Darius II have some incredible music in them, emulating the superior audio capabilities of arcade machines versus consoles. Darius Gaiden has some much more advanced audio in it. featuring vocals on a couple of the tracks. Playing with headphones on allows you to really get into the zone, so turn off the lights, get a little closer to the TV and be transported back in time.

Given that the Darius Cozmic Collection Arcade is a compilation of games renowned for their difficulty, you could spend a tonne of time trying to perfect your run to obtain the elusive high score on any of them. The more you play it, the more you’ll notice enemy patterns and get better at avoiding their attacks whilst quickly dispatching them. With the included “Training mode” you can select any level to start on and practice it.

Darius Cozmic Collection Arcade is a solid value for the £34.99 that it’s going for on the Playstation Store. If you’re a fan of arcade games, this is a collection you don’t want to miss. Spending hours upon hours trying to beat the game on just a few credits to emulate being a broke youth just visiting the arcade is a great shot of nostalgia. I’m awarding this collection the Thumb Culture Gold Award because I feel like this collection is a must-have for fans of arcade shmups, but probably not for everyone. It’s difficulty can be very intimidating, however, it’s also a very rewarding experience.