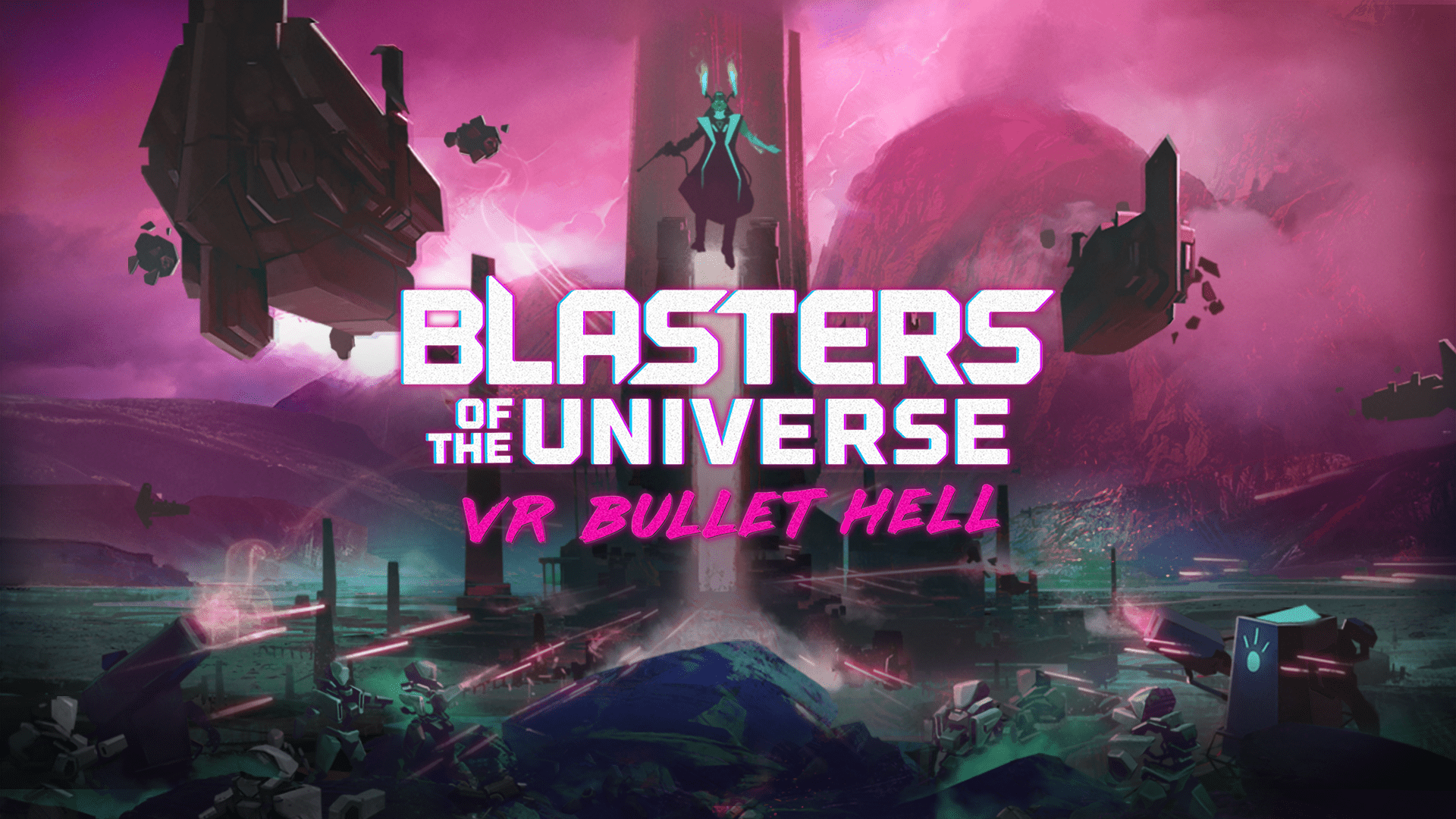 [Advisory Warning: This review contains details which disclose that the reviewer is old enough to remember the 80’s. Reader discretion is advised.]

Odd socks, impossibly large hair, guys in Porsches, women in shoulder pads and everyone wearing shades, all the time, even indoors. That was the 80’s. ET was everything, Transformers were huge, everyone listened to Madonna and Pop Tarts were considered the food of the future. Most video games could only be found in arcades and that is where this story begins. Back then the guns in video games had very little reference to real life. Overpowered guns fired impossibly large bullets that travelled visibly slowly across the screen, from hero to antagonist and vice versa. The aim of the game was nothing more than to dodge bullets and kill the bad guys. Life was simple. Life was good.

In Blasters of the Universe you get a mixture of up to date VR tech with all of these wave shooter traditions. Brought to us by Secret Location studios (beautiful VR title screen btw), the game introduces you to Allen Fitzpatrick, an ageing, unemployed, underachiever who found the only place he was ever cool was his local arcade. He transports himself into VR to live his days out as Grandmaster Alwyn changing the barren digital landscape into a neon nightmare right out of a 1980’s roller disco. 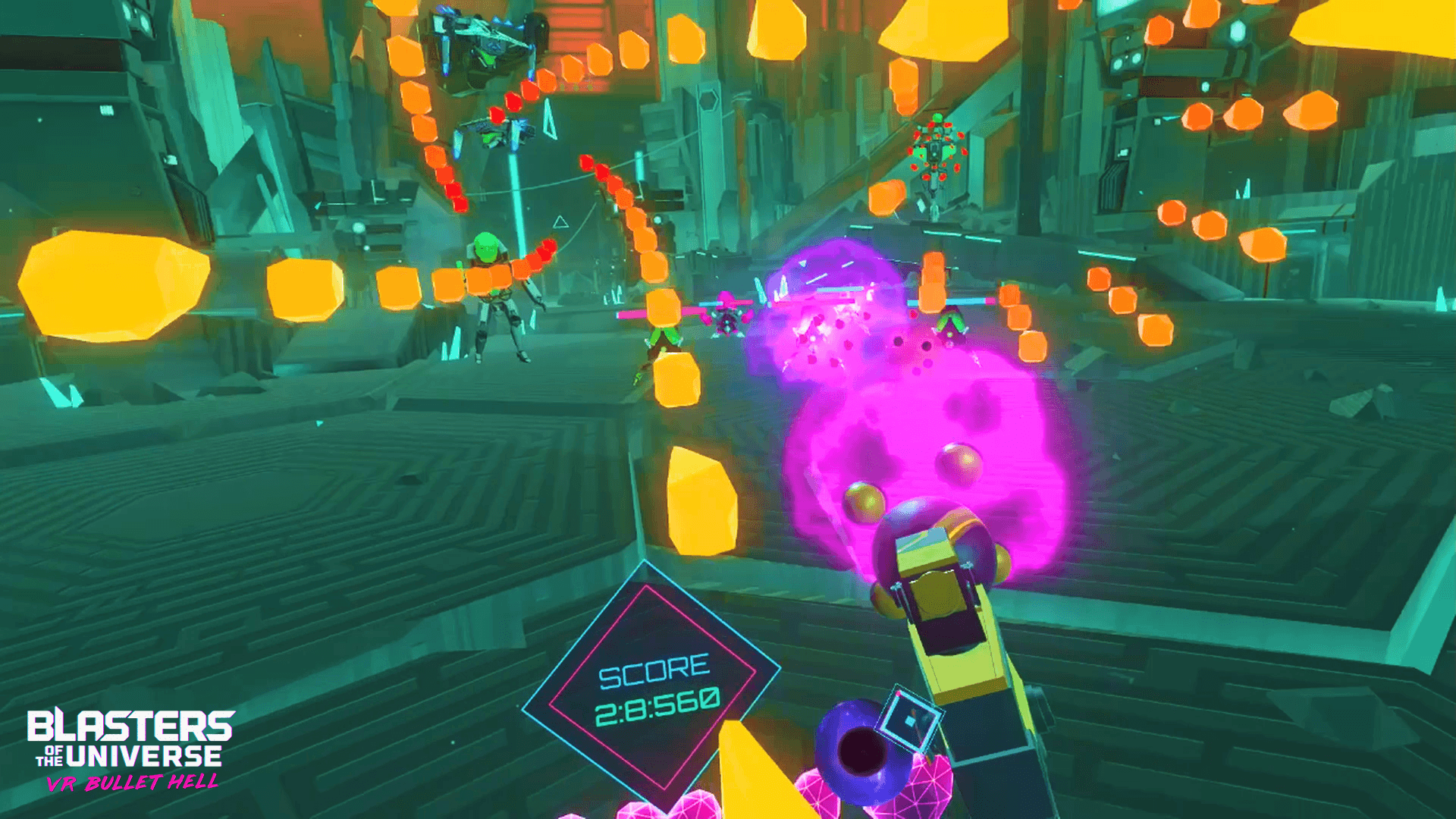 The game is available on PlayStation VR as well as Oculus and HTC Vive. While some people talk about the risk that VR gaming allows people to get used to handling firearms, this is certainly not a game intended to simulate reality.

It is exactly what the games tag line says – VR Bullet Hell.

There are three game modes available in Blasters of the Universe, Casual and Endless, which give you the opportunity to hone your skills at slinging ammo and evading bullets while you try to increase your high score, but most fun is the campaign mode.

Four increasingly challenging worlds each with its own boss to defeat as you travel through Alwyn’s world to confront him. You start the game in the Armoury where you can build and load out your own gun and shield combo. You can choose the body, ammo type, barrel, modifier and other elements to completely customise your weapons to your liking and to make it most effective at tackling the enemies in that world. 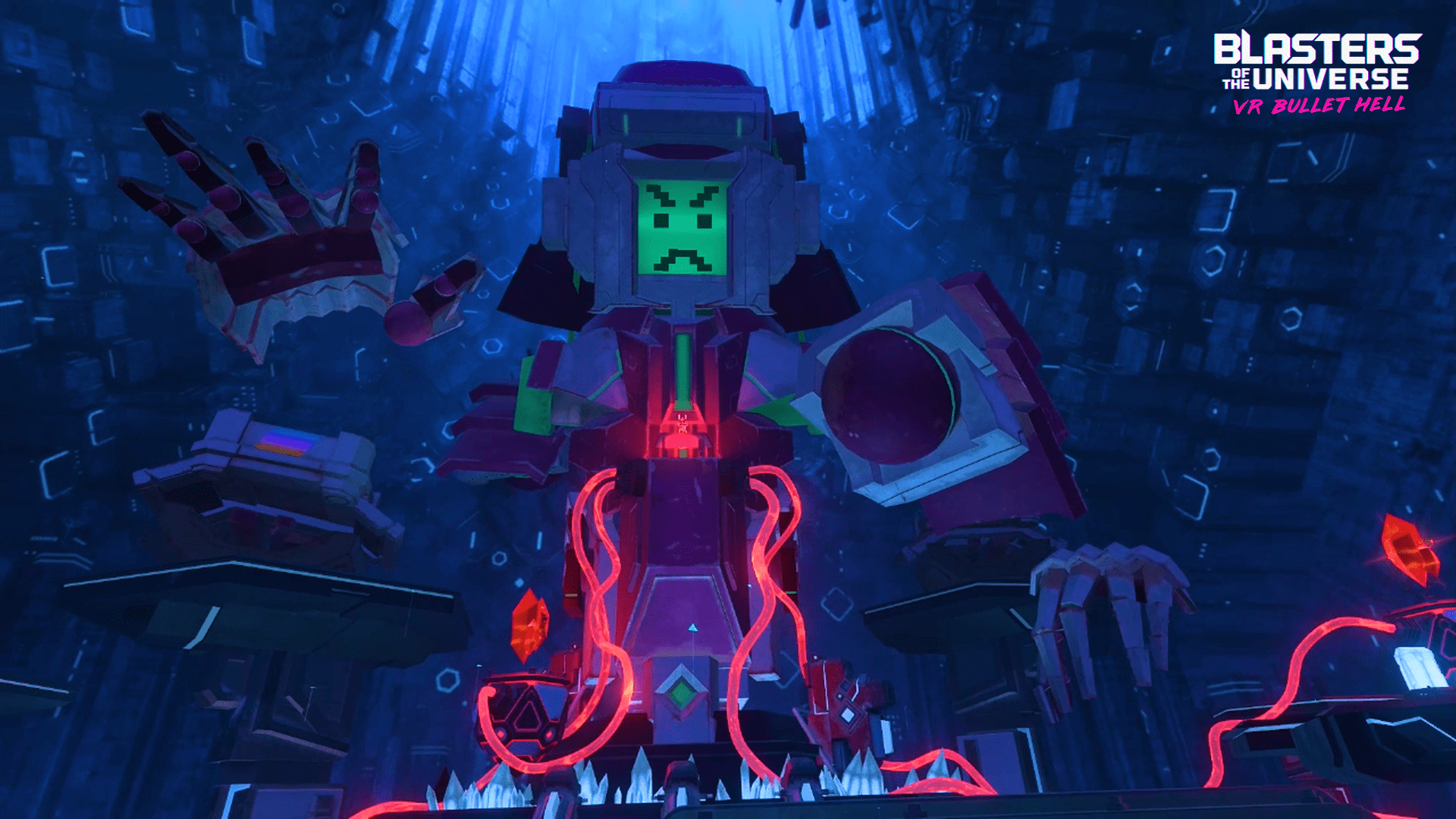 It takes a while to get used to the travel time of the shots, meaning you have to lead a moving target so it moves into your barrage of bullets, but the game does a good job of making that worthwhile by offering relevant score bonuses (wave kill, arc kill etc.). While the weapon options start out pretty basic, by the time I was done I was equipped with an arm cannon, firing instant travel ammo, with an endless supply of rounds and a modifier which supercharged every fifth shot. There are thousands of combinations available. Switching up and changing the characteristics of your weapon adds an element of strategy into the game, making it the best for that world and the enemies that inhabit it. Likewise, different shield types are available which you can use to absorb, reflect or simply block the enemy fire.

Why Blasters of the Universe stands out from many other VR wave shooters is the element of bullet dodging. You can contort yourself around the incoming attacks and earn bonuses for near misses. It becomes a game of two clear elements, shoot and dodge, and it does them both well

The move controllers work well, one controls your firearm and the other is used for your shield and to reload.The controls never wandered around the screen or lost tracking. 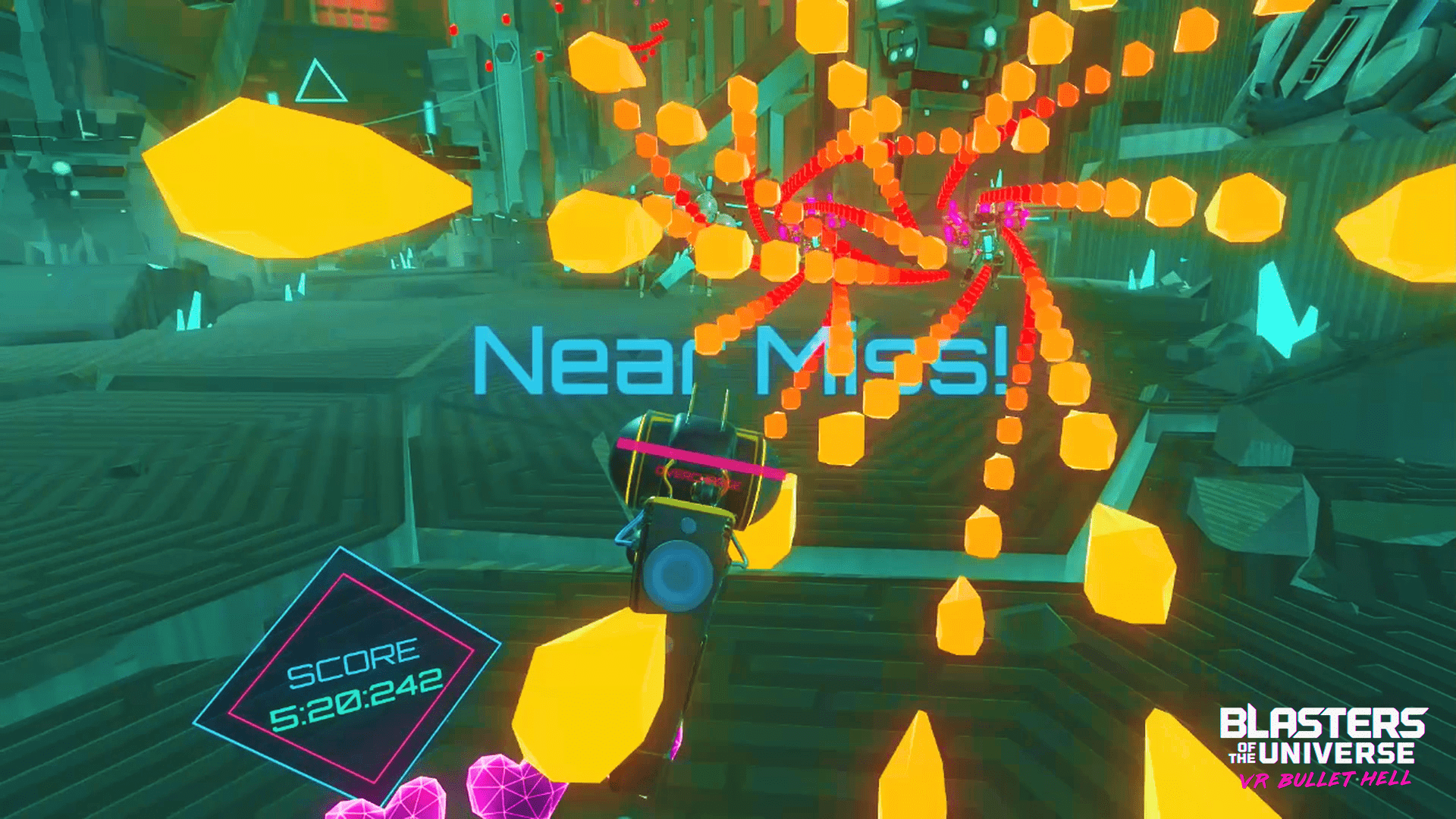 The graphics in Blasters of the Universe are clean and bright, simple in their design, but completely authentic to the style of the game. Played on a PS4 tit never struggled to keep up. The enemies are all originally designed and there are dozens of different types. Good use of neon colours means that they standout against the relatively basic backgrounds. It doesn’t look real, but it isn’t supposed to. It creates a bizarre virtual reality for you to exist in and does it really well.

Some of the design touches are straight out of an old school arcade game. Your health is represented by five hearts on the screen, get hit and you lose one. Lose all five and its back to the start of that level, via the armoury to change your setup if you wish.

Blasters of the Universe‘s soundtrack is a solid accompaniment to the game. It stays pretty simple; generic 1980s pop rhythms and synth sounds which would feel right at home in an arcade. The sound effects for reads, shield recharge, life loss and enemy movement all fit the ethos of the game as well. It makes you feel nostalgic, but not in the way that many games and films currently are. 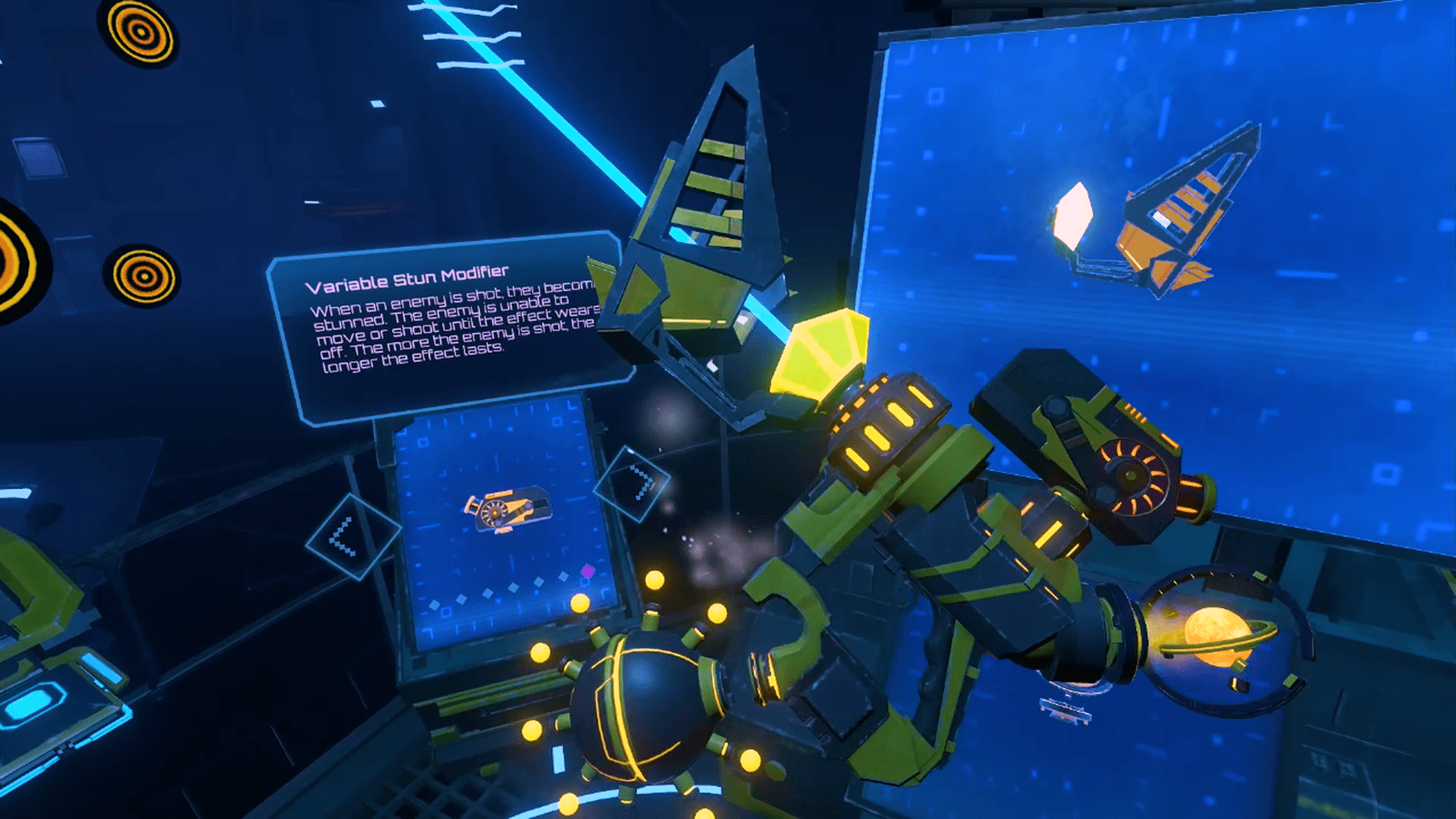 This isn’t like somebody has ripped off the era, more like this game was made 30 years ago for a system that didn’t yet exist and we just discovered it.

The campaign mode takes a few goes to get through as you progress and unlock new weapon mods that you need to defeat the increasingly challenging enemies. The game doesn’t get harder or more in depth as you proceed, but the strength and number of enemies increases and you need to adapt to deal with them. The endless modes add an element of replay value to the game, but trophy hunters would have their work cut out for them with very stretching targets to try and hit.

You move and dodge bullets in a pretty small area. There is no transport or turn controls, so nausea or vertigo don’t seem to be an issue with Blasters.

There is no doubt that Blasters of the Universe is fun. Its brilliance is in its simplicity and execution. It is exactly what it sets out to be, but there is not a lot of replay value. The four worlds all feel a bit similar and I was surprised to have finished the campaign so quickly. There is no storyline or character development, but it doesn’t need that. For a few hours of bullet hell, this game is great, but the main event ends quickly and I didn’t find myself wanting to revisit this worlds again to face endless waves of the same enemies.

The game needs more levels, it could start easier and have a much longer learning curve and still remain fun and simple. Learning the attack patterns and vulnerabilities of the bosses is good and reminiscent of older games, but with only four to face it just ends too soon. It’s a wave shooter and a good one. It left me wanting more, but not just more of the same.

Blasters of the Universe deserves a Bronze Thumb Culture Award and with a couple more levels that would be silver.