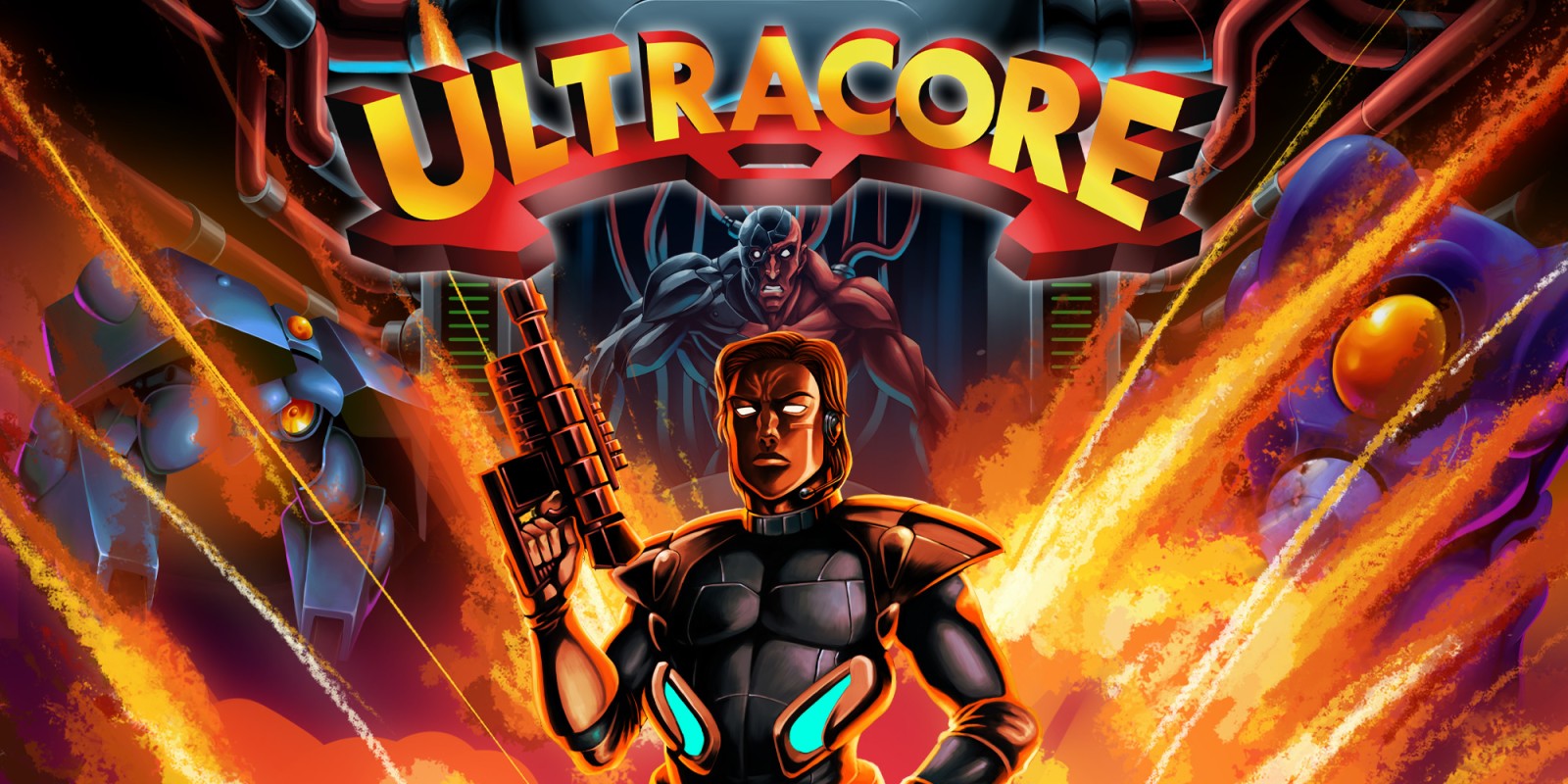 Ultracore by devs Strictly Limited Games is a fast-paced 2D side-scrolling arcade shooter that has been resurrected from the depths of an old hard drive from the 90s.  With the popularity of retro-looking 16bit style games, what better time to finish previous devs Digital illusions’ (DICE) work and allow it to see the light of day in all its glory. Previously titled “Hardcore” and slated for a 1994 release onto Amiga and Sega Mega Drive/Genesis and Mega-CD. How does it fare on the Switch in 2020?

If any of you are old enough to remember the 90s it was a great time for many side-scroller run and gun style games.  From Turrican to Contra, the game mechanics were a tried and tested favourite.  Ultracore is no different and for me, it is the authenticity of it all that seeps out of both the screen, speakers and crucially the gameplay.

Ultracore sees you play as a brutal soldier whose mission is to stop a mysterious person named Vance from destroying your world.  There are 5 large levels that you must shoot your way through set across a range of environments such as intricate underground lairs and desolate outside deserts.  In your way stands hordes of robotic enemies that either fly or walk towards you firing guns and rockets in an attempt to kill you. Turrets and other defensive weapons also adorn the walls and ceilings, therefore, you are best to keep that trigger held down for as long as you can.

Each of the levels is far from linear, allowing you to explore as much as you like as you navigate the ledges, moving platforms and traps that lie in wait for you.  One thing that you do have to keep an eye on though is the timer, so while exploring is good and there are secrets to be revealed if you keep firing at everything, be mindful of how long you have left!

Being a twin-stick shooter, the Switch Lite seemed perfectly placed for the game with the screen nestled in the middle, left stick moving the character and the right stick firing and altering the angle of the gunfire.  Throughout the maze levels, gates will need to be unlocked by either finding key cards or activating buttons, this isn’t too hard to do however it is the number of enemies and traps that are thrown at you that cause the damage.  If that wasn’t enough there is still the challenge of timing your leaps across gaps and onto platforms at the right moment.  Like all good shoot ’em-ups, at certain points throughout each level you face off against a boss baddy.  Most of them are straightforward however there is a lot of quick manoeuvring, dodging and shooting at the right places to master if you want to succeed.  Luckily death isn’t a permanent thing and if you do happen to lose a life then the level resumes you from a checkpoint and any enemy killed or damage you have already dealt is carried over.

One thing to mention however is that there is no save feature. Yes you heard me. Instead, it is the old school method of writing down a password to begin at the chosen stage next time you load the game.  Have fun with that.

Ultracore is bright and vibrant oozing 16bit glory.  Although the enemy appears to be mainly robotic machines, they come in various shapes and sizes. Some are far easier to see than others depending on the background of the scene.  Each of the enemy machines light up the screen in oily blood-like globules and fiery explosions as you start to annihilate them with your various weaponry. There is something very Bitmap Brothers about it which lured me in, memories of Xenon 2 Mega blast came floating back for some reason.  I’m pleased to say that I did not experience any frame shuddering and everything ran slick and smoothly on the Nintendo Switch Lite.

Ultracore features two soundtracks to listen to.  There is the original version from the 90s with 21 tracks consisting of 18 full length and 3 snippets to accompany your kill frenzy; secondly, there is also a brand new synth-wave/electronic soundtrack that has over 20 tracks from 12 of the genres most talented artists.  Getting to the sound effects, it is a cacophony of bullet and laser fire, therefore adding your own beat rhythm over the top of the music soundtrack purely adds to the mayhem that ensues however it blends in well!

Ultracore has 5 large levels, each with multiple boss battles to negotiate.  As mentioned earlier, there are secrets to be found through breakable walls, floors and ceilings.  There is definitely some replay ability to have once the game is complete, which will take around 4 hours, give or take a few deaths and continues.

Ultracore is a time capsule which has clearly been lovingly brought back to life and distributed for the world to enjoy.  It helps if you are a fan of 16-bit games, and there are many out there now, however this is the real deal which for me brings added charm.  As a child growing up in the 90s it felt right and the soundtracks, particularly the newer one, are brilliant.  If you want a fast-paced platform/maze-driven shoot’em-up then Ultracore is one for you.