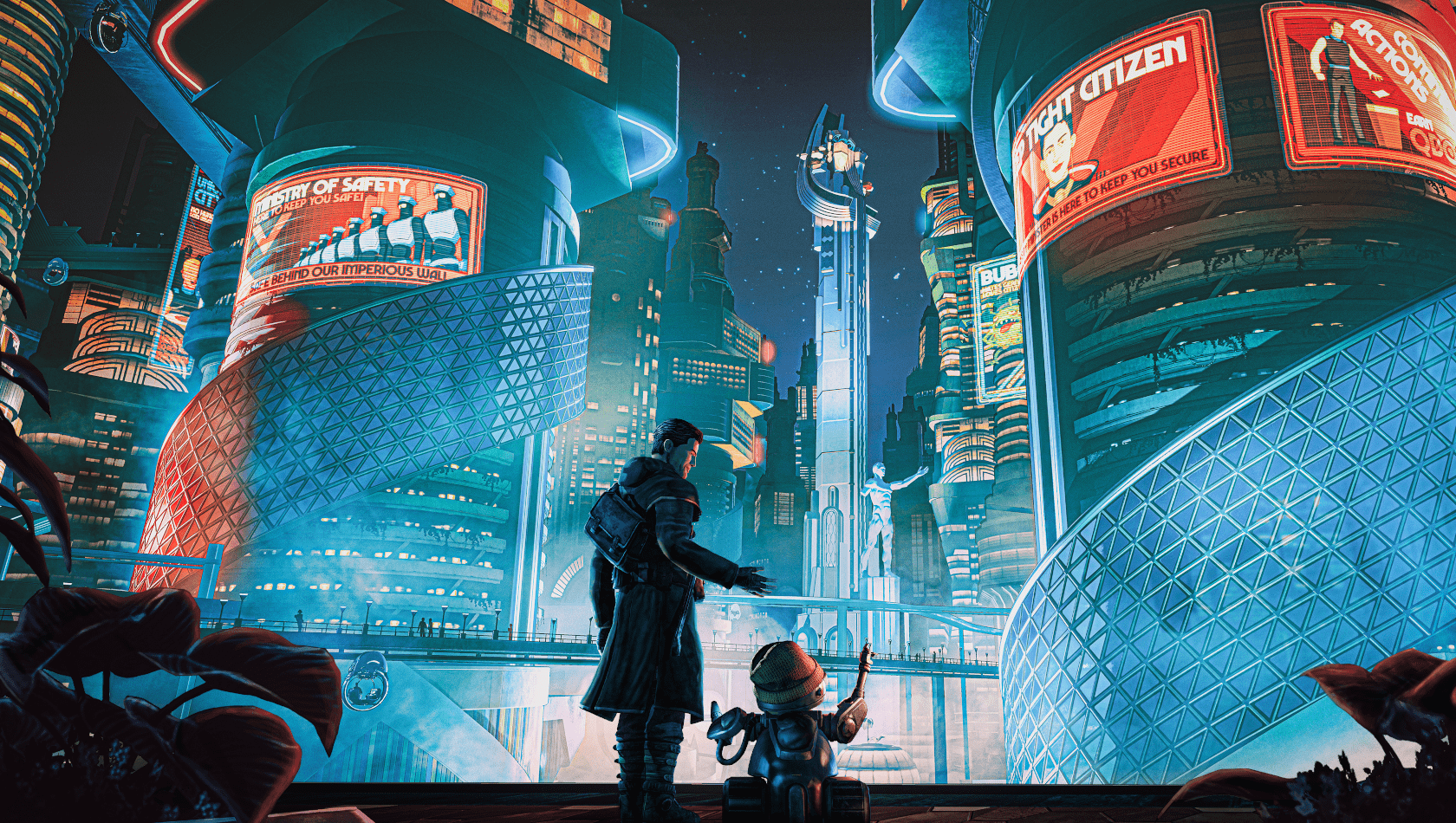 Beyond A Steel Sky by Revolution Software Ltd (Broken Sword Series), is a 3D point and click adventure game set in a cyberpunk world, written as a sequel to Beneath A Steel Sky which was released back in 1994.  Having played the first game back when I was 14 obviously things have massively moved on technology-wise since then.  Would Beyond A Steel Sky manage to successfully carry on the legacy?

Beyond A Steel Sky is a single-player game whereby you take on the role of Robert Foster, perceived as a rogue due to coming from a place called the Gap.  The main quest is to infiltrate a utopian Union City to discover where a kidnapped child has been taken.  What proceeds is a story-driven exploration around a heavily regulated city littered with challenging puzzles and interactive characters.

Beginning your mission, it is down to you to approach people, robots and objects in order to talk and interact with them.  Through doing this you learn more about how the city works and also what you need to do through little titbits of information being dropped in conversation.  Movement is through the traditional WASD keys while the mouse allows you to navigate the camera as well as click on items to interact with.  In true point and click style you will understand one main goal but will need to undertake a series of mini-tasks in order to obtain the equipment, knowledge or help that you require.

When it comes to puzzles there is a great array.  From the ones that I came across, some required memory such as remembering facts so that you choose the correct answer when questioned, others use logic such as obtaining an item for somebody.  My favourite puzzles have been set on a handheld hacking device that you discover early on.  You use it by scanning your surroundings to pick up signals from electronic objects and once selected a logic gate path is shown on the screen.  For example, if you read a door entry pad it will show you the various logic paths it will take in order to accept or reject entry.  Using your mouse you can swap certain parts of the logic gate around and allow the door to unlock when an incorrect ID card is read.  Later on, you will find that if you position yourself between electronic objects then you can bring up all of the logic paths for them onto one screen and then the fun really begins!

One of the main differences with a predominantly point and click genre game being in a 3D form is that you cannot simply move your mouse across a static screen in order to uncover all of the possible interactions, here you have to physically walk around the expansive environments to find them.  I felt that this worked well and if anything, opened up the scenes for adventure.

The more you play Beyond A Steel Sky the deeper and deeper the story weaves.  There are many places to explore, devices and characters to interact with and of course, puzzles to successfully complete.  The quality of the writing is superb and drives the game at all times.

The artwork for Beyond A Steel Sky has been directed by Dave Gibbons, a legendary comic book artist whose most notable works were on the Watchmen comics as well as on the original background art for Beneath A Steel Sky.  I love how the world has been drawn with black-edged lines around everything, very reminiscent of the old XIII game that I used to play on the PS2.  Moving around in the game, everything is beautifully animated with great attention to detail.

Beyond A Steel Sky is fully voiced with very articulated performances that give each of the characters their own distinct personalities.  The background is full of life with a full supporting orchestral score as well as playful melodies that fit into the particular scene you are in.  I loved how the sounds happening all around you created a 360-degree atmosphere with droids whizzing around or giving orders and other people chatting as you walk past.  The city feels alive with activity.

Beyond A Steel Sky, being a point and click game is typically the type of game that you complete once and then leave for a few years before attempting it again.  You have around 12 hours of gameplay to get through however this is dependent on your logic solving skills!

Beyond A Steel Sky is a brilliant point and click game in my opinion and like the other games from Revolution, it has a good balance of narrative and puzzles that keep the momentum of the game going.  It does not matter if you have not played Beneath A Steel Sky however you will notice some nods back to the previous game if you have.  I did discover a few glitches at times such as an interaction button with a character remaining on the screen after the character has walked away that caused the whole cutscene to play out again if clicked on, with the character this time being invisible, however, these are all things that will hopefully become inevitably patched as time goes on.