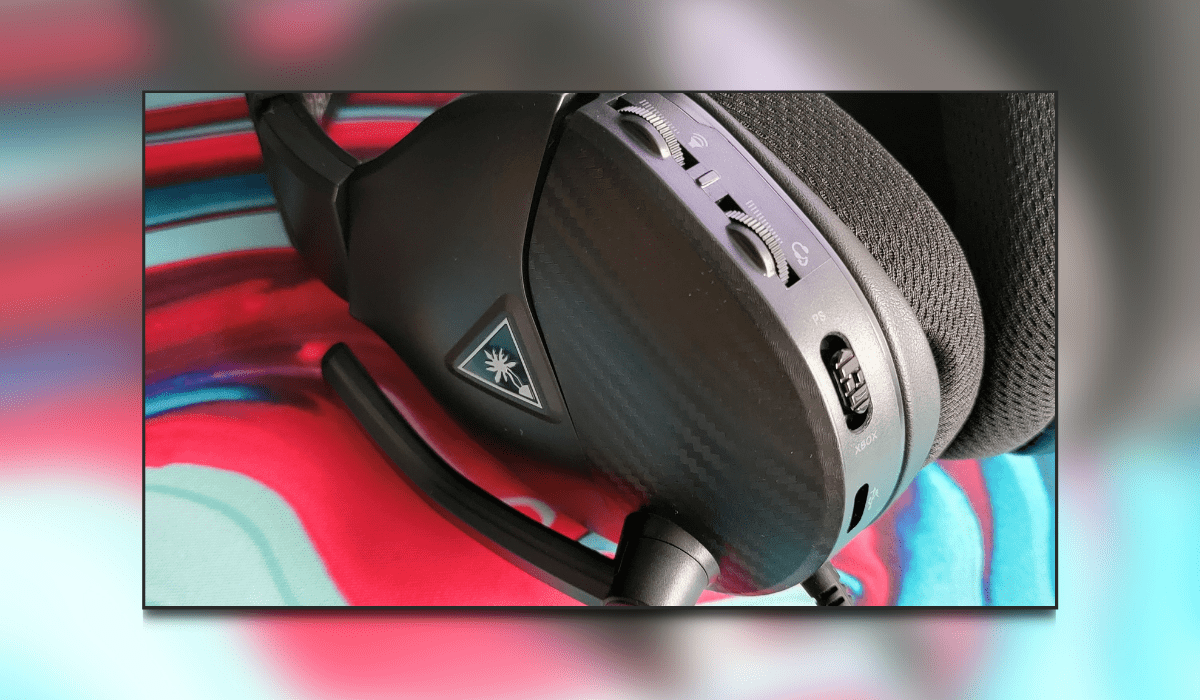 If you are in the market for a new budget-friendly headset, we have an amazing new offering from Turtle Beach. The Recon 200 Gen 2 could potentially tick every box. Working across multiple consoles from  the powerful Xbox Series X and PlayStation 5 to the small but mighty Nintendo Switch. Could this be the all-in-one headset suitable for all budgets?

The Cross-platform Headset Does A Lot Of Things Right!

If you’re looking for some other wallet-friendly options why not check out the Gioteck HC2 Range or the Sades Spirits!

The Recon 200 Gen 2’s are available in 3 colour options. Black, White, and Midnight Blue. Each option looks sleek, stylish, and subtle. There are no glowing colours or RGB flashing away. The black version I had for testing had a very nice Carbon Fiber weave pattern. On each outer earcup, there are brand logos however these are a grey/offwhite colour and keep with the subtle styling.

The left-hand side houses all of the required controls. From the top down is as follows. An overall volume wheel, Mic monitoring, Power/ system choice switch, and the bottom is a USB C charging port. There is a flip-down mic that is muted in its upright position.

Inside the ear cups is thick soft padding which is described as “athletic fabric and softer memory foam ear cushions to keep you cool and comfortable over hours of gaming”. They have also noted that these have glasses-friendly comfort which is achieved with their patented Patented ProSpecs™ dual-foam ear cushions alleviate pressure so gamers with glasses can play in comfort.

There is also a built-in rechargeable battery. This is charged via the USB C port on the left cup and boasts an impressive 12-hour playtime in the amplified audio modes.

I tested these Gen 2’s for gameplay mostly on the Xbox Series X. However, they also work on PC, Playstation, and also Nintendo Switch. During my tests sitting for sessions of around 3-5 hours a time I found the Recon 200’s remain very comfortable throughout. There was no head-crushing or squeezing during long gameplay and after taking them off there was no ear discomfort at all.

While playing some action shooters there was a clear line in the audio cues. I was able to find enemies hiding in dense bushes from their noises alone. Bass was there and efficient without being over included which can become very distracting during long plays. This was also a notable factor while listening to music with them on the PC. In their passthrough mode which doesn’t use any battery power music was clear but with no real bass presence. Activate Amplified Audio mode and there is a much more noticeable bass punch. Sitting and listening to music for a few hours was very enjoyable and relaxing with no discomforts.

There is also built-in mic monitoring which only works when the Amplified Audio is active. Controlled by the left-hand lower wheel, I found this a great little gesture that allowed me to adjust levels quickly or hear the wife ask me “how much longer?”. The microphone itself was met with great feedback while playing with friends. They fed back that I sound crystal clear and was very understandable with no unwanted background noise or breathing making its way into the team comms.

I couldn’t help but compare them to my current Xbox headset which is the Turtle Beach Stealth 600 Gen 2. With a very similar design and audio profiling, I was blown away at the similarities between the two headsets given the £40 difference. While the Stealth does have the added bonus of being wireless I didn’t feel like that was something I missed. For great comfort, practicality, and price it was hard to fault any aspect of the headset. I, therefore, give the Turtle Beach Recon 200 Gen 2 the Thumb Culture Gold Award.