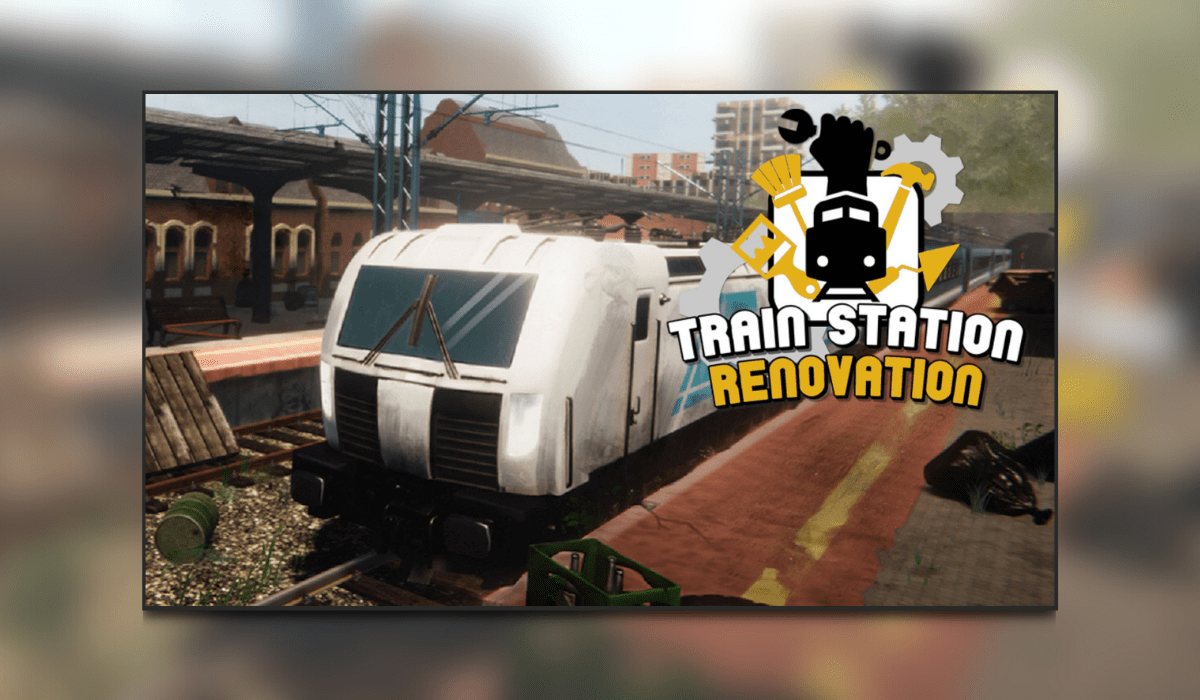 Welcome to my review of Train Station Renovation. From the Polish development team, Live Motion Games, and publishers Ultimate Games S.A, I had the pleasure of playing this on the Xbox Series S. This game originally came out on PC and the Nintendo Switch a few months back in April 2021. It released on Xbox One and Series X|S (via backwards compatibility) on June 2nd 2021.

After you’ve read my review of Train Station Renovation, you can check out my previous review here, where I played Just Die Already also on the Xbox Series S.

Train Station Renovation has now been released on the PlayStation 4 and is just as fun as it is on the Xbox One. It’s the same game as below, and just as relaxing!

We start off Train Station Renovation with a simple tutorial station that guides us through using each of our tools and the areas they are best used for. For example, we have sandpaper, which is used for sanding down the rust off of the train lines. We have a crowbar that is useful for removing the broken planks of wood from windows and on the rails, also known as a railway sleeper. There are quite a few tools which we can use on Train Station Renovation which you can see below.

Thankfully, you don’t need to remember which tool does what as when you try to destroy items, dismantle items, or clean areas up the game tells you which tool you should be using. Kudos for that, as some games don’t tell you and you have to remember. The gameplay is very relaxing on Train Station Renovation, perfect for clearing your mind or just for when you want to spend a couple of hours relaxing. This game will certainly help.

When you first start a new train station to renovate, you’re given certain “zones” to build your waste containers. You have two choices, one can be mixed, the other segregated which is used for recycling items. If you recycle the correct items in the correct section of the segregated waste bin you will earn money for recycling. Typically I have seen this range from 120 cash to 250 cash, which is pretty decent as you can fit quite a lot in the segregated waste bin and it only costs 200 cash to empty. Keep this in mind as early in the game as this can help you make some easy money. 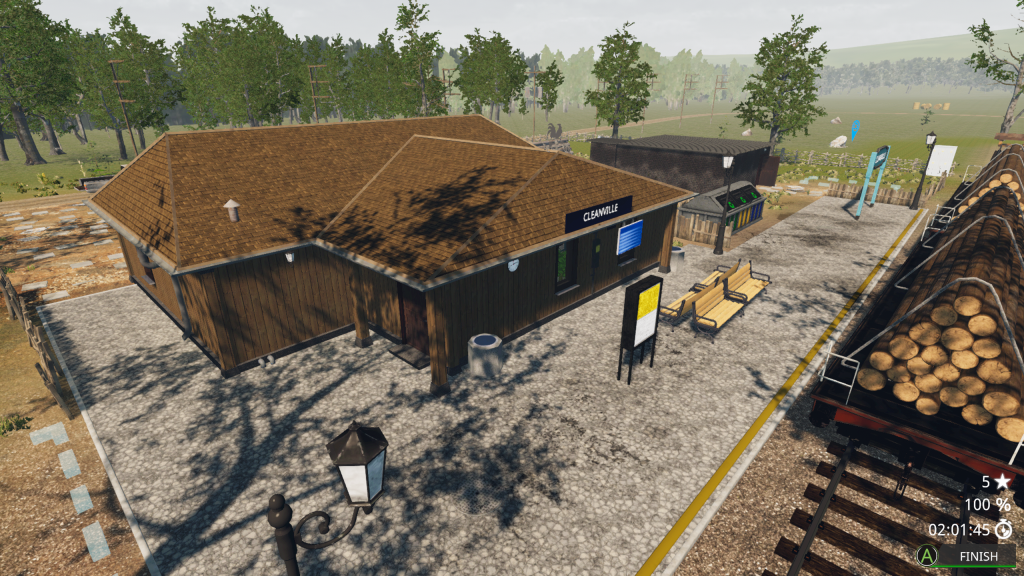 Another thing to remember is when you’re taking the waste / trashed goods to a mixed waste bin, you can destroy wooden items with the axe. This then allows many items to fit into one black bin liner which means you can fit more in the mixed waste bin. This means that you get rid of more items when you need to empty them for 200 cash. It’s little things like this that you need to remember to help you early in-game. However, money isn’t really an issue as long as you go for 100% completion on each level. For example, by level 5 I had something like 90,000 cash, so wasn’t short of a few pennies.

One thing that will help you achieve 100% in levels is the scanner. When you press B on the Xbox controller, you’ll see a circle pulse out from you. This circle will then highlight any items you need to dispose of in red. Another very helpful tool as you could be missing a small aluminium can in a small bush. Can be an actual lifesaver when you’re trying to hit 100% on each level. I took the below screenshot early on in my game progress, as you can see, levels you’ve not completed 100% show as yellow. Levels you have completed 100% show as green. Something like this certainly helps a lot when you get further in-game as you don’t need to remember or write down which levels you’ve completed 100%. 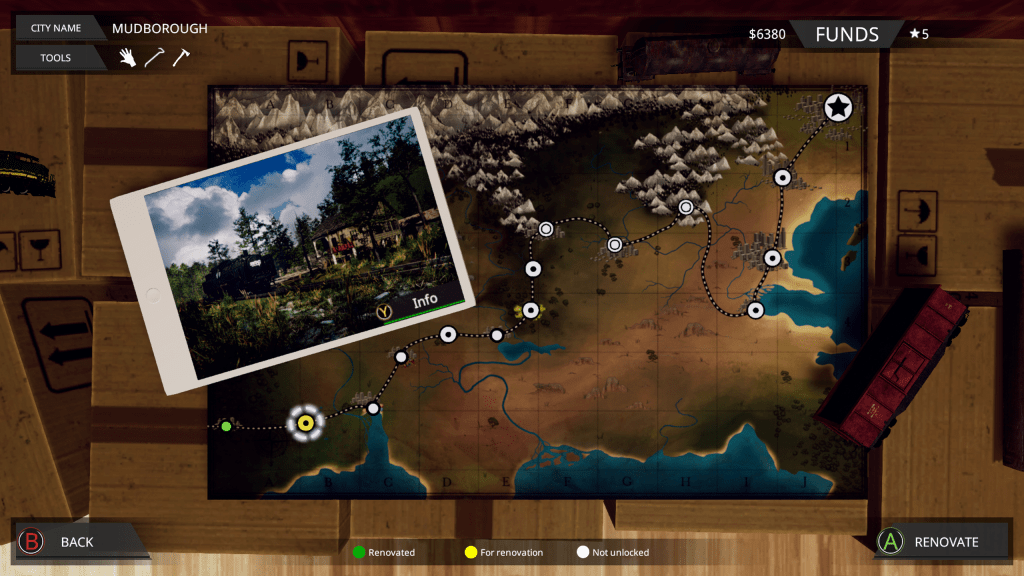 So what do you do with all this cash? You use it to purchase new items for stations you’re renovating. Benches, clocks, vending machines, ticket machines. They’re all here. You can also renew the toilets and put a urinal up high on the wall, for those tall people, you know?

The only real thing I didn’t like too much about the gameplay was the fact some of the dismantle or repair jobs are rather simple. For example, a broken light switch was fixed with the wrench tool. Broken windows are fixed by removing all the wooden planks, then the broken glass, then use your crowbar on the window frame and tah-dah. The window is replaced. I would of much preferred it if we had to buy the window or light switches and replace them ourselves. Kind of similar to that in House Flipper where you actually have to remove the electrical outlet by unscrewing it, removing the cables, then rewiring it to a new outlet.

I guess nothing is perfect though, this didn’t distract me away from the game though. I still thoroughly enjoyed it and this is literally a minor flaw that doesn’t really matter.

Ok, so the graphics are not anything special. In fact, even for an Xbox One game, they’re pretty poor. But please do not let that you stop reading here. I feel that this game is certainly more than just developers putting out a game with the most beautiful graphics ever, but dull gameplay. This game may have dull graphics, but the gameplay sure is fun! Anyway, back on topic, we go.

The graphics are quite poor on today’s standards, the textures don’t really shout out incredible detail. The in-game models for your tools and in-game items such as decorations and benches, for example, aren’t amazing. The frame rate in the game isn’t a thing to write home about neither. The frame rate appears to be locked to 30fps even on the Series S. However, one thing to note is the brilliant work done on the graffiti in the game.

Check out this anchor below, for example. You can also see the graphics which shows what I say above about them being rather dull.

Audio in Train Station Renovation is also quite bland. The music is pleasant enough though. In fact, it’s pretty damn relaxing. It helps keep you nice and relaxed along with the gameplay.

This game will see you through many hours of relaxing renovation works on the mainline. Sorry. Anyway yes, this will definitely last a long time just on the main campaign mode. For example, it took me nearly 9 hours to complete the first 5 stations. There’s then the sandbox mode which is so relaxing it’s unreal. This mode alone could last you many hours. The game itself is a long game which is typical of a simulation game really.

As I mentioned the graphics aren’t groundbreaking. The audio in the game also won’t whisk you into a world of your own. But don’t let that discourage you from playing Train Station Renovation. It’s a very relaxing game which I have sunk many hours into. It is definitely a game that can help you if you’re struggling with any mental health problems or de-stress. Kind of like PowerWash Simulator which Dan previewed here. The gameplay definitely makes up for the standard graphics and audio. I award Train Station Renovation the Thumb Culture Silver Award.