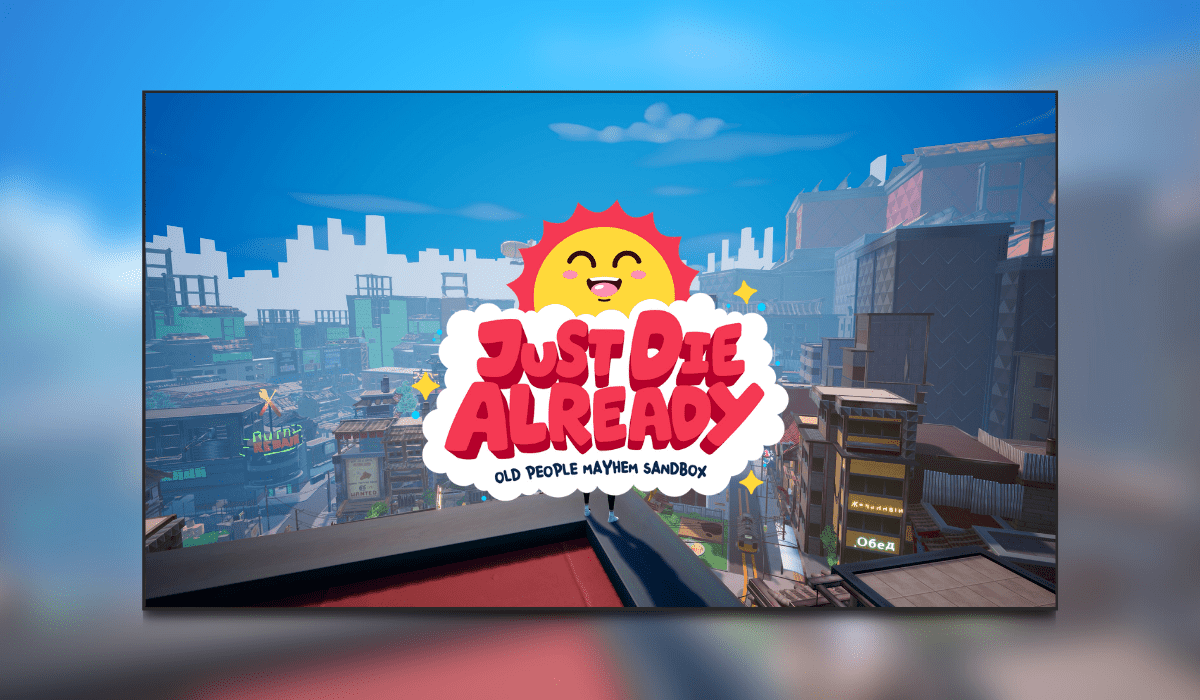 Just Die Already is a game by the designers of Goat Simulator, who are now part of DoubleMoose Games. Just Die Already is published by Curve Digital, which you may know for games such as Human Fall Flat, Hotshot Racing, Bomber Crew, and Pumped BMX. Described as an “Old people mayhem sandbox” it already sounds like this will be good fun. I had the chance to review the Xbox One version of Just Die Already, I played it on the Xbox Series S.

Just Die Already – Mark That Off Your Bucket List!

Let’s get stuck into my Just Die Already review. If you enjoy this review, be sure to check out my previous review here, where I played Manifold Garden. Let us know in the comments if you’ve had the chance to play Just Die Already!

The player starts off by choosing from one of four old people, Stanislav, Wally, Kamala, or Lucky.  Just Die Already starts us off in our care home and our first objective is to get kicked out of the care home so we can be free in the big city. It didn’t take me long to injure my poor elderly person!

As you can see, carnage broke out in a matter of seconds from my elderly person awaking from his slumber. All I did was tried to light a Molotov cocktail on the stove! However, I soon grasped the idea of the game. You use LB and RB to grab on to items, and then LT or RT to use that item. There are many items for you to found in Just Die Already. Keys for doors and chests, food, drinks, weapons. It’s all here. That reminds me, there’s a neat feature in this game where you can injure or possibly kill your elderly person by having a drink, and then peeing on some sparking electrics. It does not end well for your character!

Speaking of food items and weapons, there are also vending machines dotted around the city for you to spawn food, drink, or weapons so you can do certain things a little bit quicker and easier. These are very much appreciated and certainly do make certain tasks that little bit quicker to action. Especially when you have a pesky bouncer who keeps stopping you proceeding or cracking on with a task you’re trying to do!

There are loads of things to do in Just Die Already. You’re given a “Bucket List” book from a homeless guy once you’ve escaped the care home. This bucket list is basically the objectives that you need to achieve. Things like losing one thousand limbs in total, free an old person from a balloon, die a number of times, and my favourite, become a headless horseman. To do this one you need to lose your head, and only your head, pick it up in one of your hands, then find a toy horse head and walk around whilst holding both. That is pure class in gaming folks.

Finding these new areas and being given new challenges is quite a challenge in itself. However, don’t let that deter you from playing more of this game. It really is a great laugh, just bear with the game at the start as it is a little confusing and slow, to begin with. It will be more than worth your time.

The graphics are good, but nothing that will blow you away on today’s standards. This is not really a bad thing though, because the style of the graphics in Just Die Already certainly fit the theme of the game. The graphics are similar to Goat Sim, so if you’ve played that, you’ll know what I mean. I had a strange audio bug during my playtime, where the audio would literally sound like it’s coming from a gramophone. I reached out to the developers, DoubleMoose Games, to ask about this. They reassured me that it’s a known bug that slipped through the net and a patch is in the works for this. Because of this, I don’t want to knock the audio in the game. These things happen and at least a patch is in the works. Hats off to DoubleMoose for the rapid response also, thanks!

From what I can tell in the audio, it sounds comical at times. Elderly people moaning and groaning as they’re walking about, the city life full of hustle and bustle. Once the patch comes in, I believe the audio will be brilliant in Just Die Already. Also thanks again to Filip at DoubleMoose for making me aware of the incoming patch for this bug.

I’ve played the game for around 6 hours on solo mode, so far. I’ve done around half of the “bucket list” book so this game could take anything up to 15 hours on solo depending on how quickly you get through it. Then there’s the co-op mode which just creates endless opportunities for laughs with up to four friends online. The chaos that can be had online is incredible and certainly not something you’d want to miss out on if you have the game. There are also 12 achievements to unlock in the game. Some seem easy, others are not so easy.

I think Just Die Already is a humorous game that requires a little patience from you to get used to the controls. The graphics won’t blow you away, but they’re perfect for the style of game in my opinion. Great job on this game DoubleMoose Games, I had a blast, literally. I give Just Die Already the Thumb Culture Gold Award. 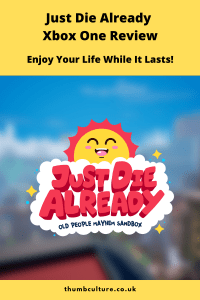