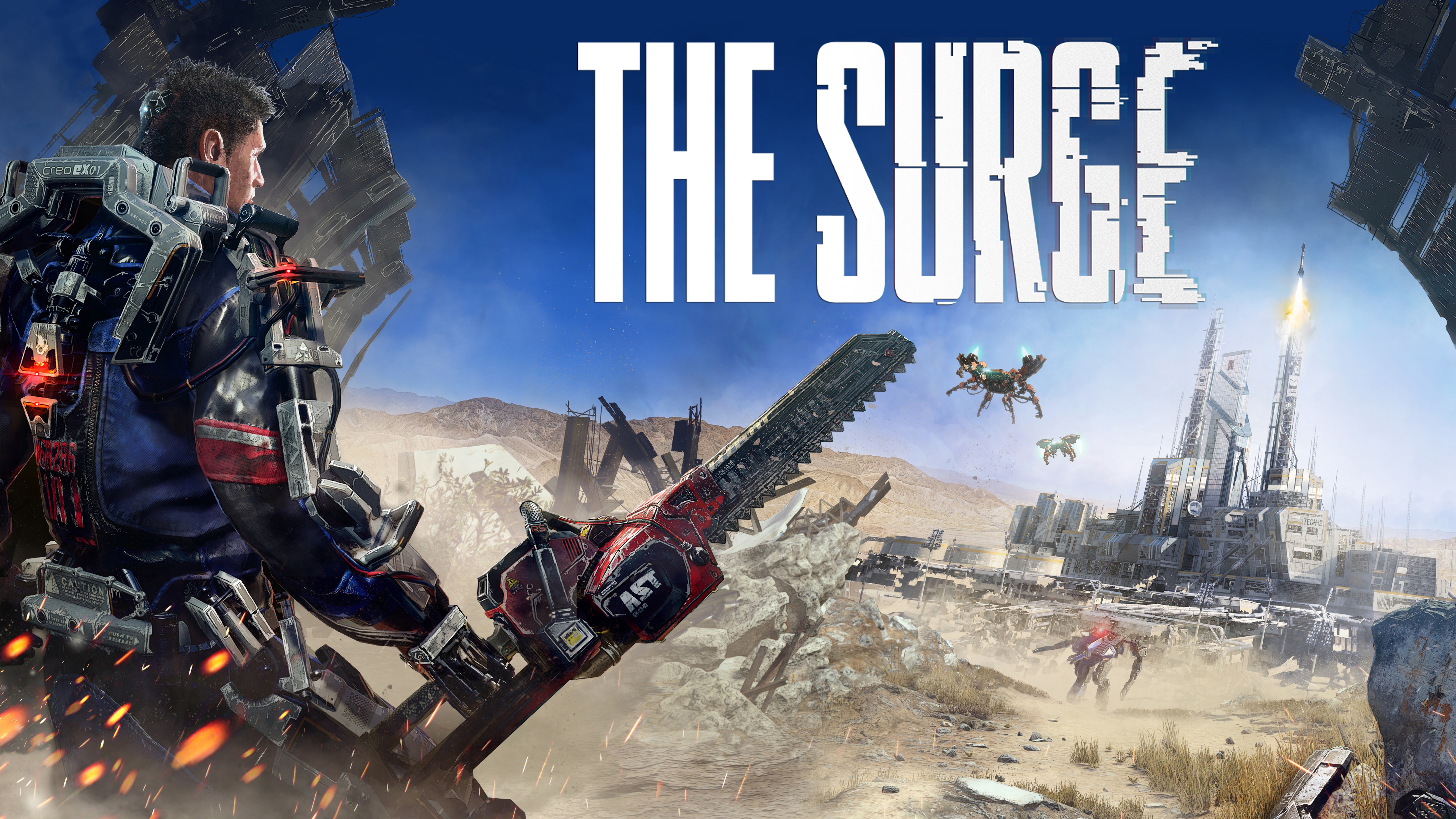 The Surge is a hard-core action RPG from Deck 13 and Focus Home interactive, the studios behind Lords of the Fallen. Although The Surge bears some similarities to Dark Souls and Bloodborne, it is more than capable of standing up on its own merits, and in some ways manages to improve the tried and tested formula.

The Surge starts off with an impressive little cut scene that sets up the story and introduces you to your character and CREO, the antagonist organisation. You are then presented with two sets of starting armour, after which the game begins. You are dropped immediately into a combat situation with a handy tutorial.

Tutorials are handled very well by placing the text on the environment itself, making for a less intrusive and more immersive experience. On the surface combat appears to be simple with horizontal and vertical strikes, however it will not take long to discover that combat is the star of this game. A large part of that is because combat is how you acquire new gear, whether its weapons or armour, but not in the usual manner of a random drop. Instead The Surge tasks you with dismembering enemies to acquire the items you seek. Like the look of that new weapon? Chop his arm that’s carrying it off and it is yours. The same applies for armour except you will acquire a schematic for the armour piece that you then need to craft.

Crafting is handled in the Med bay which is the safe areas of The Surge. Quite a neat little system that requires some currency and a material, which varies depending on what you want to craft/upgrade. The materials can be found by removing the limbs from your opponents. So if you are after material for some leg armour, target enemies legs and you will receive that material. You are also treated to a flashy and gory animation when you dismember an opponent.

Weapons are varied and all require a degree of mastery. From clubs and cutters to hammers and arm blades, knowing your weapons move set can mean the difference between life and death. The more you use a type of weapon your proficiency for that weapon type increases.

So far I have only encountered two types of enemies, humans wearing exo-skeletons, and larger industrial machines. The design on these larger machines requires a great deal of tactical combat as they have large health bars and various abilities including healing itself or debilitating you with an EMP type attack.

There is a basic levelling up system where you spend tech scrap to increase your power core, the bigger your power core the bigger the armour and weapons you can equip. All this makes the game feel more immersive as a result, and I would argue that it is one of the ways that The Surge manages to improve the action RPG formula.

Its not all combat though, another big part of The Surge lies in the environments themselves. Although I am only about 10 hours in the environments so far have been varied, and a joy to explore. Exploration is key as this unlocks shortcuts that lead back to the Med bay, allowing you to spend your hard-earned tech scrap. Hard earned it most certainly is as this game is extremely difficult. Make a few mistakes and you will be punished, often in the form of death. Once you die you respawn at the Med bay having lost all your acquired scrap. You are given one chance to reacquire your lost scrap though, by retracing your steps to the place you slipped off the mortal coil, but be warned you are on a timer to do so. Run out of time or die again and that lovely scrap is gone for good. 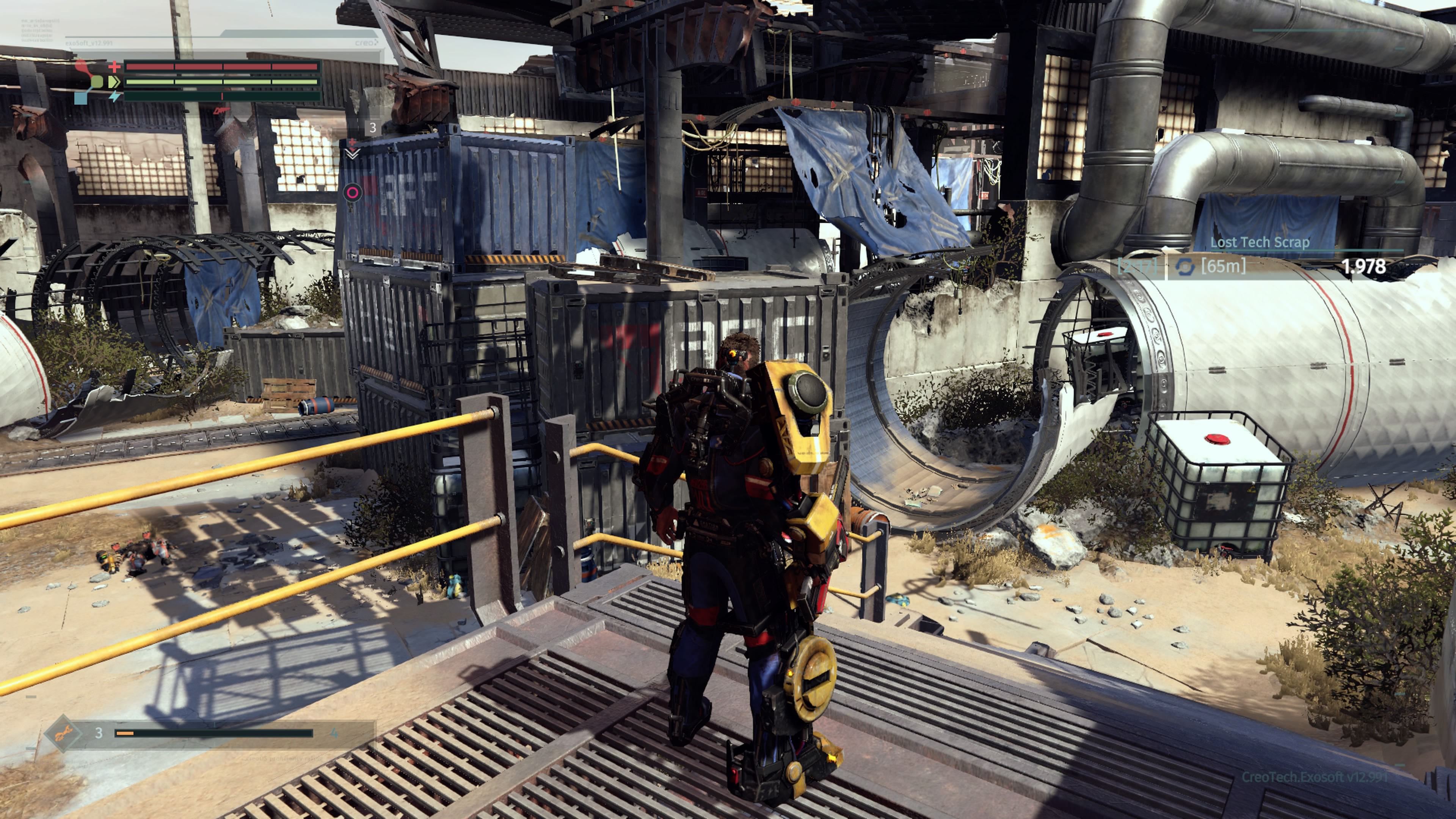 Visually The Surge is very impressive and easily compares to recent releases in the same genre. Exteriors are bursting with light and have a vibrant colour pallet that is reminiscent of other post-apocalyptic games such as Fallout. Textures are crisp and environments are highly detailed. Interior areas are suitably dark and dingy which pairs nicely with the lighting on some of your weapons. Weapons such as the Spectrebite for instance have electricity visible on them, which when in dark areas illuminates a small area around the player, another nice touch that feels both comforting and adds to the sense of dread.

Sound design in The Surge is also excellent. Combat is full of the satisfying crunches you would expect to hear when metal connects with metal. Voice acting is generally good with the NPCs I have come across delivering their lines in a convincing manner depending on their roles within CREO. Music has a very industrial/techno feel to it which again fits within the game and never becomes too much.

As I am currently only a short way into The Surge I cannot really comment on the games length. Although I will say that at approximately 10 hours in I am only in the second main area of the game and approaching the second boss. I can tell however that there is quite a lot of replay value already as I have found multiple paths through the levels, some easier than others. There are different armour sets to acquire and upgrade, and a variety of weapons to master.

The Surge also features a fully-fledged New Game + mode which has new gear and higher levels of upgrades as well as tougher enemies and new placements of different enemies. For those wondering it does carry on with multiple New Game pluses as well, and with enemies scaling indefinitely with each playthrough, you will never be short of a challenge.

The Surge then is a surprisingly good Sci-Fi action RPG and is worth a look if you are a fan of the genre. The difficulty is sure to put a lot of people off, as was the case with Lords of the Fallen. The system of dismembering enemies to acquire new gear is a revolutionary addition to the action RPG genre and one that I hope is used in future games.

The Surge slices its way to a Thumb Culture Gold Award.