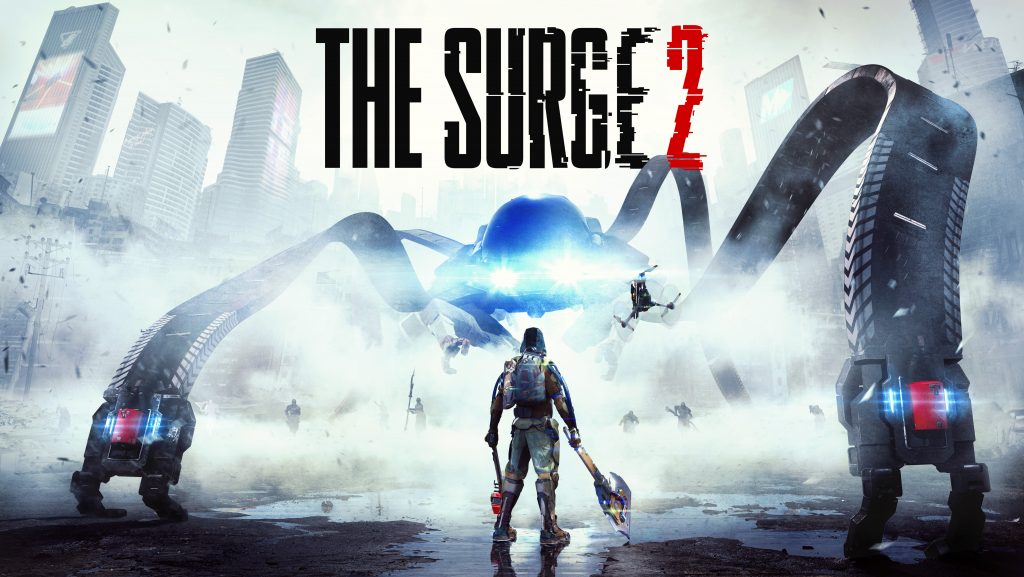 Picture the scene. Dark Souls and Deus Ex are curled up together on the sofa. Light from a nearby Yankee Candle gleams in their eyes, the Clean Cotton scent reminding them of summer tumbles beneath swaying washing line. A few unfinished oysters sweat smugly on an earthenware plate, their brothers and sisters having already played their part in stoking the fires of both games’ loins. Dark Souls says it should be getting home, it has to do the school run in the morning.

Deus Ex says “It’s dark and rainy outside, you could stay in the bed. I’ll sleep down here.” Dark Souls heart leaps… this is what it wanted, maybe what it has always wanted. It knows it can’t continue to hold Deus Ex’s gaze lest the two should dissolve together for all eternity… but it’s too late. Their lips tremble before locking together like a pair of, particularly oppositional magnets. Now fast forward to 9 months later. A child is born. That child is christened the Surge 2, and it is a special child indeed.

The Surge 2 is a third-person action-adventure from Deck13 which features heavy doses of exploration and challenging combat. It releases today for £49.99 on PS4, Xbox One and PC.

You play as [insert whatever you want to call your made-up man or woman), the lone survivor of a catastrophic plane crash caused by a mysterious technological meltdown. Your initial goal is to escape a hospital situated in Jericho City, a corrupted metropolis full of bad eggs. Why are you here? Who is the mysterious young girl who keeps appearing in your visions? And how do two games even conceive a child anyway?

The Surge 2 features some of the most compelling combat I’ve witnessed this generation. Enemies range from feral humans with metal appendages to terrifying robotic beasts with… er… metal appendages. Even when pitted against low-level foes fights are frenetic and intense. As with Dark Souls, each action drains your stamina bar temporarily. Drain your stamina bar completely and you leave yourself vulnerable to attack until the bar is completely re-charged.

In addition to attacking directly you can block, parry and dodge, but I found the game punishes excessive dodging due to the associated stamina cost, so it is better to bait attacks and punish accordingly. The stamina mechanic means every fight feels fresh, and there are many ways to tackle a difficult encounter.

The real jewel in The Surge 2’s crown is the ability to target specific body parts of an enemy using the right stick. Targeting the arm in which an enemy is holding a weapon will eventually allow you to sever it, allowing you to take the weapon for your own. Similarly slicing off an arm or leg will allow you to snag a schematic for the piece of armour the appendage was wrapped in.

Gone are the days of killing the same enemy over and over in the hopes of snaring a piece of a rare armour set by chance. Even better, upgrading a weapon or a piece of armour is simply a case of cutting off more of each body part to gather the necessary materials. If you want to an upgrade your helmet from level 4 to level 5 simply target a helmet-wearing level 5 enemy whose helmet schematic you have already collected and you will gain upgrade materials instead.

This system works incredibly well. Not only do you not stockpile the same armour pieces and weapons over and over, but you are incentivised to take risks. You could target an unarmoured body part for an easy fight, but you won’t get much of a reward for doing so. Sometimes the temptation is to wuss out when fighting a high-level enemy, but the promise of gear which could tip the balance later can lead to the risk seeming worthwhile.

Weapons are plentiful and come in all kinds of varieties, from spears to samurai swords to Dr Zoidberg-style pincers. Each of your murder tools feels weighty and distinct, and the different enemy types encourage you to experiment to find what works for each situation. It’s viable to try out different weapons because it’s so easy to upgrade your arsenal and each weapon offers a range of advantages and disadvantages. As is typical, fast weapons are usually weaker but use less stamina, whereas slower weapons are usually stronger but tire you out quicker. However, you also have a battery gauge, which is essentially a magic meter, and some weapons fill this gauge with each successful hit. This can be used to power your healing abilities or trigger offensive or defensive boosts. It might be worth using a weak weapon in a fight if it allows you the ability to recharge your character’s health when you need to.

On top of your weapons, there are also “implants” which enable you to equip passive or active buffs or a huge pair of buttocks (okay, not the latter). This is all quite overwhelming, to begin with, and The Surge 2 doesn’t explain its mechanics as well as it could, but it started to click for me as the game progressed.

Make no mistake, The Surge 2 is extremely tough, especially during boss encounters. The enemy AI is very aggressive and there are occasional punishing difficulty spikes which force you to either improve your technique or your character’s defensive or offensive capabilities to get by. Anyone who has played Dark Souls will be in familiar territory with The Surge 2’s levelling up system. Dying once drops your means of levelling up (“souls” in Dark Souls, “tech scrap” in The Surge 2). Dying again or not getting back to your loot in time means the currency you have gathered is lost forever.

Safe havens exist in the form of Med-Bays, and these allow you to pour the resources you have gathered into levelling up your health, stamina or battery as well as improving your weapons and armour. This system features a few neat touches though. A marker tells you how far away the tech scrap you dropped is, killing enemies extends the timer and you can even bank your tech scrap at a Med-Bay if you want to mitigate the risk of exploring but can’t afford to level up. Dropped tech scrap also awards the player with a health boost when picked up, which improves your chances of progressing further.

Exploration is tense but enjoyable. Jericho City is pretty sprawling, and there are hidden passages and doorways all over the place. The player is usually rewarded for straying from the beaten path, either with weaponry, upgrades, tech scrap or collectable audio logs. Unfortunately, The Surge 2 can occasionally be difficult to navigate, and the maps littered around the place lack detail and give little indication as to where to go. This can occasionally be frustrating as it’s all too easy to aggro a dangerous enemy if you take the wrong direction when heading towards an objective, particularly in late-game sections.

The Surge 2 looks great, with enemy designs being particularly worthy of praise. At first, the setting seems pretty standard for a sci-fi game, with a strong visual resemblance to recent Deus Ex titles, but just as the city environment starts to get tiresome you’ll find yourself in a verdant park, being pursued by invisible Predator-like foes. The city feels carefully put together, although it doesn’t quite hit the high watermark set by the Soulsborne titles.

Unfortunately, there are occasional frame-rate drops and this can make punishing fights even more difficult. Fortunately, it is unlikely that these dips in frame-rate will seriously taint your experience, especially if you were a fan of the chop-fest which was the original release of Dark Souls.

The Surge 2’s soundtrack is perfectly adequate but seemingly intentionally unremarkable, and most of the time the city is quiet save for the heavy clang of metal upon metal. The music does rise to the occasion during dangerous encounters, with menacing synths ratcheting up the tension even further.

The Surge 2 offers numerous side missions and opportunities for exploration which will pull players away from rushing through the main quest. The difficulty will likely mean that less experienced gamers will need to re-run most bosses several times before they learn their weaknesses and move-sets. Even after completing the main quest there is the opportunity to obtain souped-up boss weapons by defeating them under special conditions should you want to go back for more.

The Surge 2 is a fantastic addition to the PS4 library and will please fans of challenging action-adventure games. It offers satisfying and rewarding gameplay in spades and will melt through your time like a hot knife through butter if you let it. I have no reservations in giving this golden child the Thumb Culture Gold Award. Well done!