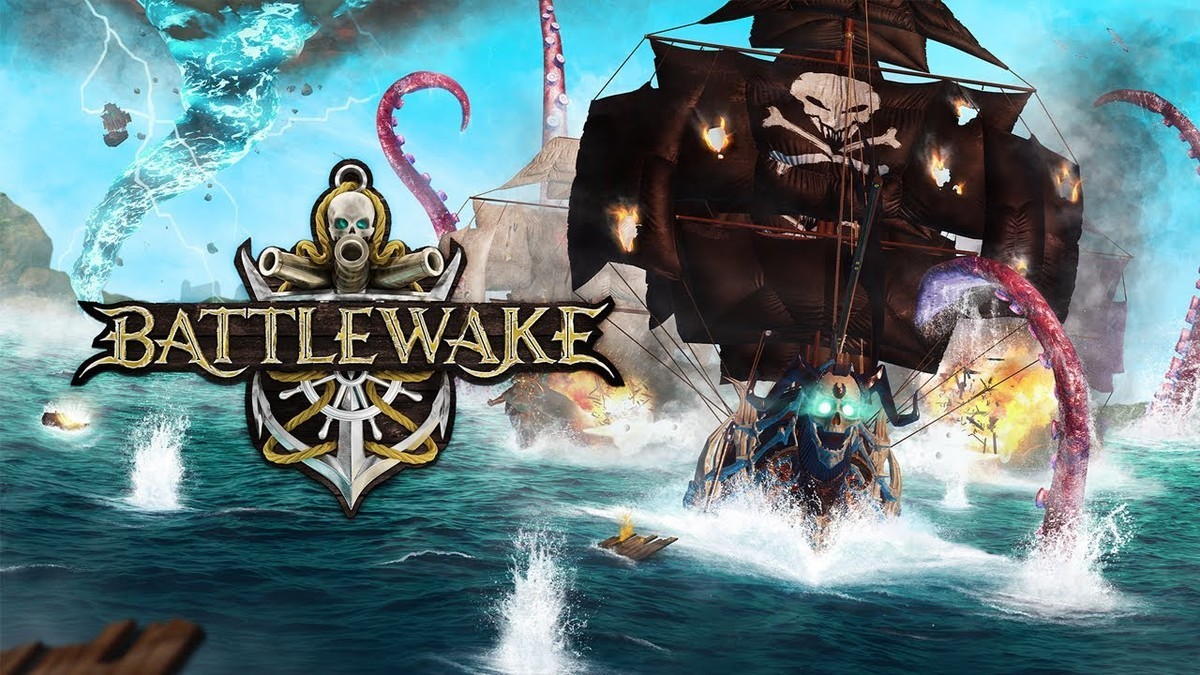 Avast ye matey! Buccaneer’s Survios have unearthed Battlewake, a VR pirate adventure. Is this the VR booty you’ve been craving or is it just a trip to the poop deck?

I know what you’re thinking, Sea of Thieves VR? Well…no, it’s not. Although it definitely has similarities in terms of design, gameplay-wise, it’s nothing like it. Battlewake is a battle arena game, where you take control of one of four characters who have unique abilities in order to take down countless pirates. Released September 10th in America and 19th September in the EU, have the excellent Survios, creators of fantastic PSVR games such as Raw Data and Sprint Vector, got another hit on their hands?

Focusing on gameplay, I used the move controllers but the game is compatible with the Dualshock. You aim at boats by pointing at them, which then locks on to enemy boats and then pull the trigger to fire. It’s an intuitive way to attack and becomes second nature quickly. On top of that, manoeuvring the ship is exactly how you’d expect, grab on and steer. At times I felt as if I was sailing the seven seas, and blurted out the odd “ah harr!” however, after a couple of hours, my enthusiasm wore thin. The gameplay loop gets tiresome and lacks any real depth. The maps, although varied in terms of theme, are quite small and enclosed which can make the gamer feel suffocated.

In Warfare mode, you can level up your ship which you can use in deathmatches. This adds another layer to the game’s mechanics, but unfortunately, I don’t see this game building a huge community to keep the online element thriving.

Graphically this game is beautiful. It’s reminiscent of another popular pirate game and that’s not a bad thing at all. Being at the help and grasping the wheel does feel good and will satisfy those who want to cosplay as Captain Jack or Blackbeard. The full body is rendered which adds to the immersion. Speaking of which, Battlewake successfully puts you in the boots of a pirate. You feel the sway of the seas without a hint of motion sickness. Survios have ensured you have a comfortable time in the game by including blinders when performing big turns and snap turning if you don’t want to physically observe your surroundings.

The voice acting is surprisingly strong and helps to immerse the gamer into the world. However, the impressive voice acting is hampered by the clichéd dialogue and sub-par narrative. I think this is the biggest miss-step of the game as a strong campaign with varied missions, which puts the characters at the forefront could have elevated the game. The sound of the cannons and waves all helps to anchor the gamer in the world but is this a game that you need in your VR collection?

The game features a healthy amount of modes for a VR game. The campaign can be played both solo and two-player co-op, and features five missions for each of its four characters. Unfortunately, the missions are quite repetitive and shallow, and the full campaign can be completed in about two hours. However, the campaign is not the selling point of this game, it’s the online PVP and the co-op ‘ongoing’ missions. The deathmatches are fun, but that’s mostly due to the ridiculous pirate impressions and banter online. Here you can select your Pirate Lord, who all have different abilities ranging from summoning the Kraken to speed bursts to help escape danger which adds strategy to online matches. Speaking about the online aspect, there are issues. It took several attempts to get into a deathmatch and even longer for the Warfare mode, which does make me worry about the future of the game’s online content.

Well…Battlewake is a mixed bag. The campaign is disappointing and offers little replay value. It acts as an extended tutorial for each Pirate Lord rather than a meaningful experience for the gamer. Graphically it’s impressive, and it plays well, if you like the Assassin’s Creed: Black Flag naval missions, but as a whole, it lacks the depth to stand out to be the next must-play PSVR game. Rather than the Black Pearl sailing the deep seas, it’s more like a turd floating in a puddle. Unfortunately, it’s shallow experience with some solid ideas, due to that I give this a Thumb Culture Bronze Award.