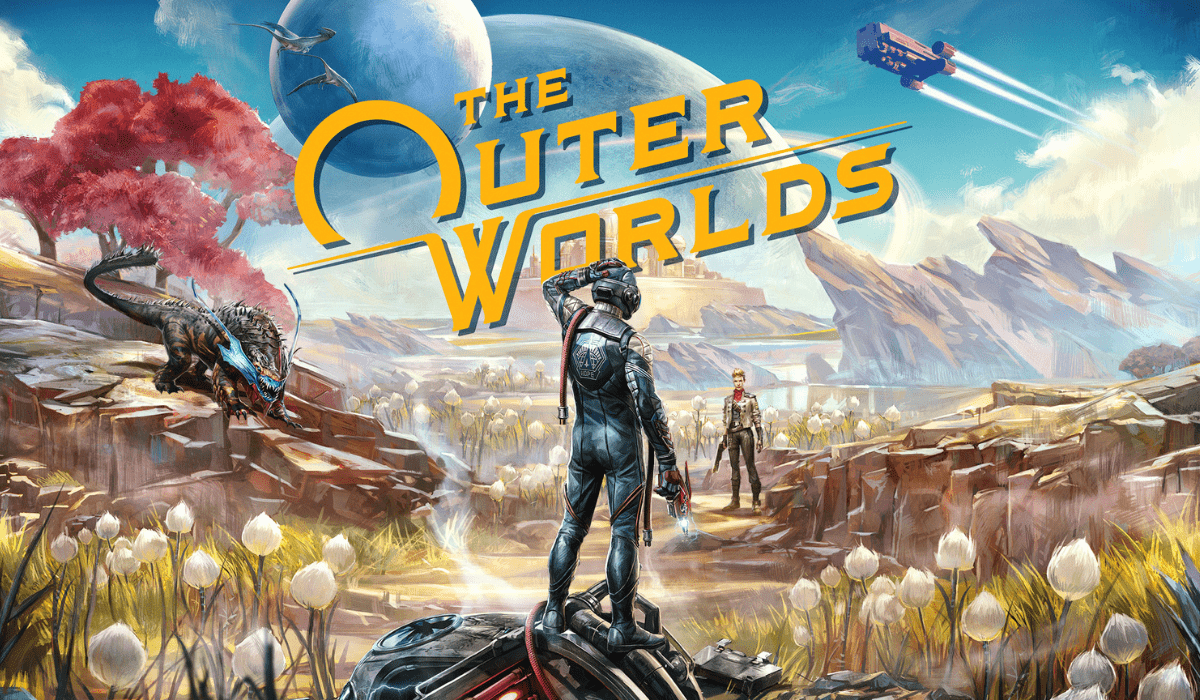 Am I the only person in the known universe not to enjoy The Outer Worlds? It certainly feels that way! On paper, everything about The Outer Worlds should be right up my street. Developed by Obsidian and published by Private Division, this space opera-themed action-adventure RPG was probably one of my most highly-anticipated games to play of 2019. So, what went wrong?

In this post, I’m going to be taking a look at The Outer Worlds in a bit more detail and putting it out there as to why it’s got a lot more to do for me to fully get on board with The Board and all it’s trappings.

What’s Not To Love About The Outer Worlds?

I feel like I should preface all this with the obvious caveat; my take on The Outer Worlds is precisely that – my take. I appreciate that many others will (and do) absolutely adore this game and all of it’s quirky, colourful RPG elements. And to some extent, I can see why. The narrative design is incredibly intricate. The character levelling system is interesting and varied and the visuals of the levels and characters are beautifully crafted. But for me, The Outer Worlds is still just a bit…meh.

It’s like that feeling you get when you’ve got a brand name packet of loo roll and a no-frills version. Ultimately, they’re both just full of paper to get the job done, but one has a fancier looking bag (and perhaps a smoother feel) than the other. The fancy bag here is, of course, the prestige and precedence that comes hand-in-hand with the name of The Outer Worlds‘ developers. With Obsidian being the team behind the much-loved Fallout: New Vegas, perhaps the bar was always going to be set too high with this particular type of game-based loo roll. Or maybe I just have a major blind spot when it comes to first-person based games, but more on that in a moment.

I’ve dipped in and out of The Outer Worlds for over a year now but have recently had the chance to review it again on PC. Somewhat annoyingly, I’ve found myself drawing the same conclusions. While I really wanted to love everything about this game, I found myself getting a bit bored, really quickly. It’s hard to bring myself to care that deeply about a world that’s clearly created to hold up a political mirror to that of our own. The story unfolds in a futuristic universe where the human race is practically enslaved by a ‘board’ of corporations. As a result, the myriad of social, cultural and geopolitical problems you invariably end up drawn into as part of your time navigating the Halcyon colony just become a bit, sort of, draining after a while.

While I do admire the depth and breadth of narrative work that’s clearly gone into The Outer Worlds‘ story and its incredible cast of NPCs, the sheer volume of dialogue encounters and options available became, for me, a bit grind-like after the first few hours of the campaign. Although I love branching dialogue and side quests as much as the next RPG nut, in this case, The Outer Worlds is perhaps the gift that gives too much.

Some of the NPCs you encounter on your travels present you with such problems and dilemmas that feel problematic as opposed to satisfied that you’ve done the right or wrong thing by the end of your interaction with them. The whole experience of so many moral grey areas with these characters just left me feeling like The Outer Worlds was a bit too reminiscent of everyday life in the real world to actually be that enjoyable.

One of the main issues I had with The Outer Worlds is in its inability to swap out of first-person camera view. This is again, a personal gripe that I know not everyone will take issue with, but I genuinely think that if there’d been the option to release my character into third-person mode and free up my peripheral vision, I would have enjoyed this game a lot more. The detailing and artistic design of this game is, however, pretty stunning.

The character modelling, armour and weapon styling is gorgeous, as is the retro-futuristic kitsch styling of the advertising, jingles and pseudo-scientific artwork peppered around Halcyon’s worlds (and loading screens…I loved the loading screens). I feel like visually, I could watch someone else play this game for hours, but playing it myself left quite a lot to be desired. Framerate and graphics wise everything ran super smoothly on my PC so there were no issues there.

Combat in The Outer Worlds isn’t especially satisfying, it’s another thing that’s just ok. Likewise, the stealth system isn’t particularly efficient in this game; it’s remarkably easy to trigger groups of enemies even in stealth mode because of how tightly packed together they all seem to be. While you do have access to an impressively designed and sizeable arsenal of weapons, looting in-game is tedious at best, frustrating at worst. Armour and weapon modifications are also well-imagined, but not that revolutionary. You do collect a consortium of different companions along the way, which is kind of fun as they do help with combat, some are more useful than others.

One thing that did bother me was the extensive menu and in-game journal usage necessary in The Outer Worlds. While I admire the effort that goes into writing such extensive backstories, journal entries and weapon descriptions, perhaps a happier medium would’ve been to have just had less text and used a larger font? At one point in the game, I had a genuine “I’m not reading all that, but I’m happy for you, or sorry that happened” moment. I can imagine that for some players, especially those looking for improved accessibility options, this could get tiresome, frustrating and ultimately offputting.

Audio in-game is nice enough, but kind of calmingly bland in the same way you’d experience while getting a facial at a health spa. That said, I didn’t dislike it, but it didn’t massively enhance my experience either. A notable mention has to go to the sound designer of the game’s advertising jingles. They’re a fun and welcome injection of catchiness into the soundtrack for sure.

Special effects are fun despite the clunkiness of combat. Also, the addition of TTD (Tactical Time Dilation) is kind of fun in a reminiscent of Fallout’s VATS kind of way, but it’s not quite as tactical as it could be. TTD is your main ‘just-woken-up-from-cryostasis’ superpower and allows you to slow down time to more effectively target enemies. However there’s no specific targeting system as you would have had with VATS, so essentially it’s a ‘press and hold to slow down time for a bit’ kind of mechanism. Which is nice, but not that impactful.

In terms of how long I could see myself playing The Outer Worlds for, things get complicated. If I had the will to, I reckon I could deep-dive into this title for hours, days, probably even months. There’s just that much to do and that many different NPCs to engage with. The question is, do I want to?

Frustratingly, my answer is probably no. The effort required to immerse myself into this game is probably on par with the effort that’s clearly gone into the conceptualisation and design of actually bringing it to life. And, while I’m all for recognising that, I also kind of just want my gaming exploits to be, well, fun. The Outer Worlds seemed like fun at first, but I quickly found myself losing the will to care for characters who seem so utterly resigned to their depressing lives as peons for their corporate overlords, even if they do have excellent banter. If I want that, all I need to do is go doomscrolling on Twitter.

For others, this will be a game they can happily sink hours of their lives into. I just wish I felt the same.

I wanted to love this game so much. I don’t hate it, but I’ve been left feeling distinctly underwhelmed by it, and I think that’s what bothers me the most. The Outer Worlds is beautiful to look at and full of originality in its dialogue but under the surface, it’s just not the fantastical journey of new ideas I expected it to be. Perhaps that’s why I didn’t respond as well to it as I thought I would, who knows? With such high expectations, perhaps the only logical conclusion is ‘just ok’. That said, it’s a solid new IP and with new DLC to consider, there’s every chance that things could improve and expand greatly upon the base game.

You will probably have fun playing The Outer Worlds, but I’d adjust your expectations accordingly. If you’re anything like me, it’d be the best way to avoid disappointment. The Outer Worlds gets a Thumb Culture Silver Award from me, purely as I know that while it’s not my cup of tea, it’s certain to offer plenty of Spacers Choice for everyone else. 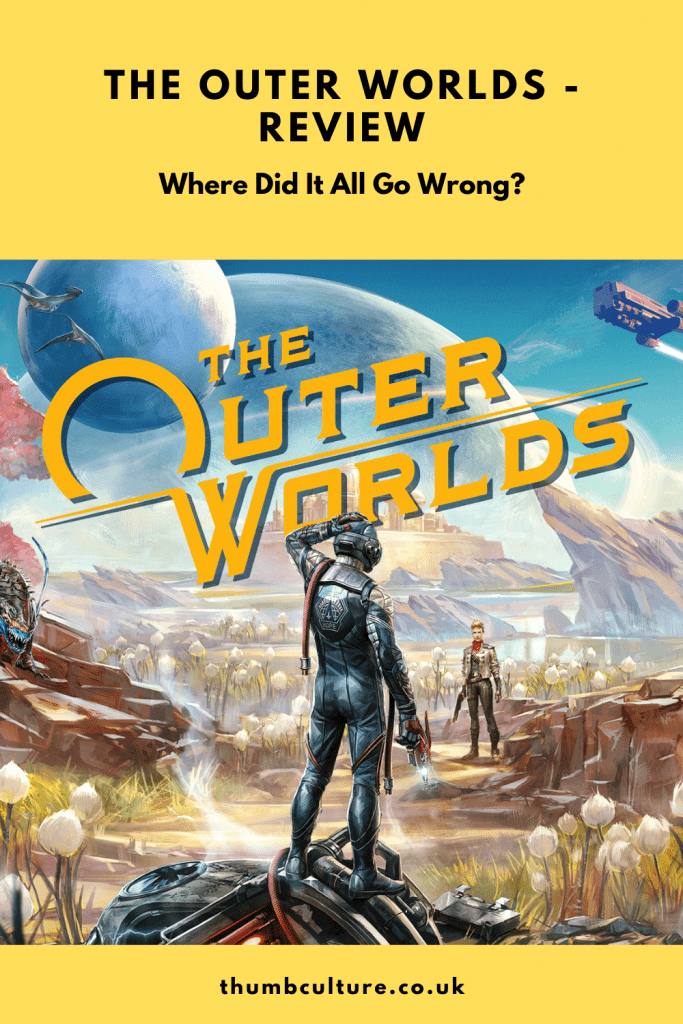