Codemasters return to the mud, rain and snow in Dirt 5! However, don’t be expecting a standard rally game. Dirt 5 shows us just how good and improved a game can get from the previous iteration. Reviewing this on the current PS4 Pro, but rest assured due to Codemasters allowing a free upgrade to the next generation of consoles, I will definitely be revisiting this to bring my next-gen thoughts on the game.

Oh have I mentioned that Dirt 5 is awesome and you should go and buy it right now….no? Well, you really should!

So Dirt 5 returns to the more traditional style 0f Dirt gameplay, racing against other people on the track all at once, yes there are a couple of modes where it’s just you on your own, but the majority of the time you will be trading paint with other AI controlled (Or humans once the multiplayer is open to all) racers. Be warned…they are Dirty!

Firing up the game and heading into the game modes screen you have a few options, but I think you should start on Career, this gives you a brilliant overview into the many race types that you can choose in the Arcade game mode. You also have Playgrounds and a link to our preview video giving you a run down of what to expect there is below.

Once you start up Career mode in Dirt 5 you are greeted with a series of events, complete the event to be awarded a stamp which goes towards unlocking the next tier of events. You still need to finish on the podium for that to count though, which brings in a nice challenge as you move further up the tiers.

So what event types are you going to be taking part in? Well there is plenty to take part in, and I could list them all for you and tell you what they are all about, but half the fun of Dirt 5 is experiencing the events and locations for the first time. Needless to say my favourite event was the new Path Finder events. This event has never been seen in a Dirt game before and sees you taking part in a point to point solo race, taking in massive terrain, huge jumps and even bigger hill climbs. Expect to be restarting a few times as you forget to gun it up the ramp and end up rolling back down the hill.

Dirt 5 also boasts over 70 routes spread across 10 locations. These range from the desert of Arizona, the North Lights in Norway and even racing on the frozen East River in New York City. Each location is totally different, and you can experience a very different driving experience depending on what terrain you are gunning across.

The car selection in Dirt 5 is great, with classic rally cars such as the Fiat 131 Abarth all the way to more modern Rally Cross monsters. There is something for everyone, and each car has its own

The story behind the career mode in Dirt 5 welcomes a couple of well-known voice actors, Nolan North and Troy Baker. Yes, the double trouble dream team are here to bring to life your adversaries as well as AJ who takes you under his wing and helps you through your journey. Make your way through the 5 chapters to become the ultimate Dirt driver!

The cars and tracks are superbly rendered and put together, you have a sense of location whichever event you chose. Each of the cars in the game all feel great and all deform when you hit walls and other drivers.

With the game being touted with enhanced visuals on the upcoming next generation systems we will revisit the game to find out how they perform once we get hold of the new systems.

The soundtrack on Dirt 5 is brilliant, with tracks that definitely get you amped before starting a race. The car audio is perfect, but then why you would expect anything different from a Codemasters title I am not sure. The game however is super loud! When starting it for the first time on my Arctis Pro Wireless headset it almost blew my ears out with how loud it was. Drop the master volume down though and it’s absolutely fine.

Playing through Dirt 5 you can plough through the Career mode in an afternoon if you are committed enough, however once you factor in the online MP which will have party games (this wasn’t available whilst carrying out the review, but will be checked out at a later date) and also the new playgrounds mode then the game has a massive lifespan ahead of it.

All in all Dirt 5 is the ultimate racer for those wanting something off track! If you are on the fence about whether to buy this still after reading through them do not hesitate, you won’t regret your purchase. It feels great to handle, plenty of tracks, tonnes of cars, and an in-depth creation mode with Playgrounds gives Dirt 5 the ever impressive Thumb Culture Platinum Award. 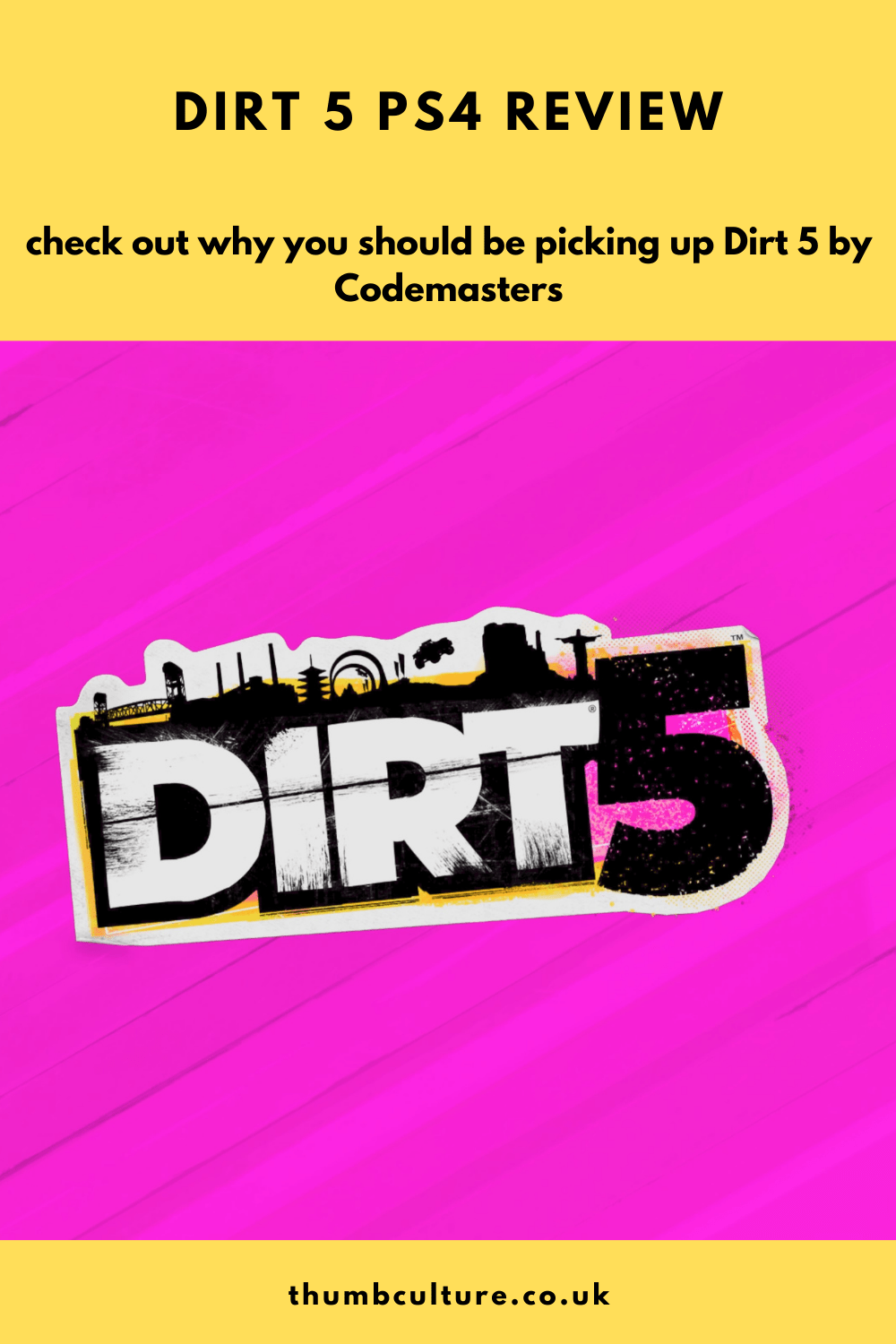